There is ‘no signal’ that the Oxford and AstraZeneca Covid vaccine is causing blood clots, scientists have said in response to scaremongering from European officials.

At least five EU countries have stopped using the jab on members of the public after reports of people developing clots after having it in some nations.

But regulators and scientists say there’s no proof that the vaccine had anything to do with this or that blood clots are any more likely after having it.

AstraZeneca has reported just 37 blood clot-related events out of 17million people who have been vaccinated so far in the UK and EU. There had been 15 cases of deep vein thrombosis, usually affecting the legs, and 22 pulmonary embolisms in the lungs.

The chief medical officer at the firm said these numbers were actually lower than the ‘hundreds’ that would normally be expected in an average group that size.

And one scientist said countries ditching the vaccine were ‘reckless’ because Covid-19 is so dangerous.

Britain has used more doses of the AstraZeneca vaccine than anywhere else in the world – over 11million – and there has been no sign of a rise in blood clots.

Professor Anthony Harnden, from the UK’s official vaccination committee, said there was proof the vaccine would save lives from Covid but no proof it could lead to blood clots.

He said: ‘The risks of not having the Covid vaccination far outweigh the risks from the vaccinations.’

Oxford’s Professor Andrew Pollard, who helped develop the vaccine, said ‘a lot of stuff happens to people all the time… so, when you put a vaccination campaign on top of that, clearly those blood clots still happen.’

Professor Pollard said there are 3,000 blood clots every month in normal times so it wasn’t unusual to see people develop them. And people getting the first Covid vaccines are at higher than average risk of clots because they are older or unhealthy. 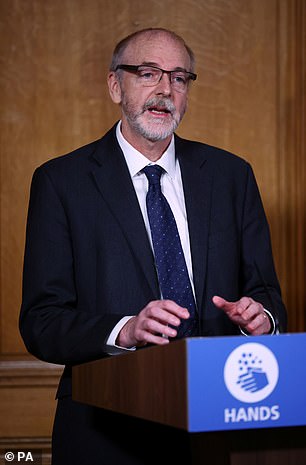 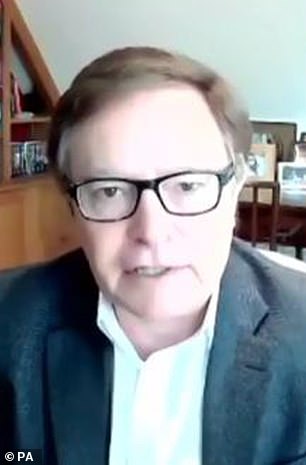 Oxford’s Professor Andrew Pollard (left) and the JCVI’s Professor Anthony Harnden (right) both said there is no evidence that the vaccine was causing blood clots, but there is evidence it is saving lives

What is the blood clot controversy?

Experts in the UK have had to leap to the Oxford jab’s defence after countries in Europe said they wouldn’t use it while the blood clots were investigated.

Denmark, Norway, Iceland, Bulgaria and the Republic of Ireland have all paused the use of the vaccine because of concerns about blood clots.

Although clots are very common they can be serious and even deadly, potentially triggering strokes, heart attacks or blockages in the lungs.

Fears about the clots were escalated when patients died with clot-related illnesses in Austria, Denmark and Italy.

The European Medicines Agency said it has received 30 reports of people developing blood clots within days of having the vaccine, out of a total five million people.

It is carrying out a review of these cases to see if there is a link to the vaccine. But the numbers suggest that 4,999,970 out of the 5m did not get blood clots.

What does AstraZeneca say about the risk of blood clots?

In the midst of the crisis AstraZeneca put out a statement last night, March 14.

It said it has reported just 37 blood clot-related events out of 17million people who have been vaccinated so far in the UK and EU.

There have been 15 cases of deep vein thrombosis, which usually affects the legs, and 22 pulmonary embolisms, which are blood clots in the lungs.

Chief medical officer at the pharmaceutical firm, Ann Taylor, said: ‘Around 17 million people in the EU and UK have now received our vaccine, and the number of cases of blood clots reported in this group is lower than the hundreds of cases that would be expected among the general population.

‘The nature of the pandemic has led to increased attention in individual cases and we are going beyond the standard practices for safety monitoring of licensed medicines in reporting vaccine events, to ensure public safety.’

What do vaccine officials in the UK say about the claims?

The UK has used more doses of AstraZeneca’s vaccine than anywhere else – approximately 11million – and officials and scientists insist there is no sign that it causes serious health problems.

Side effects are common, and around 53,000 have been reported across the UK so far, but the vast majority are mild and short-lived, such as headaches, muscle pains or fever.

British drugs regulator the Medicines and Healthcare products Regulatory Agency (MHRA) has insisted the vaccine is safe and said people should continue to take it.

Its vaccine safety chief Dr Phil Bryan said: ‘We are closely reviewing reports but given the large number of doses administered, and the frequency at which blood clots can occur naturally, the evidence available does not suggest the vaccine is the cause.

‘People should still go and get their Covid-19 vaccine when asked to do so.’

The same message is being put out by the Joint Committee on Vaccination and Immunisation (JCVI), which advises the Government on its vaccine rollout.

‘We have given 11million doses of the Oxford/AstraZeneca vaccine to date and there’s no demonstrable difference between the blood clots in those that have been vaccinated from those in the general population.

‘One ought to also remember that Covid causes blood clots. So, the risks of not having the Covid vaccination far outweigh the risks from the vaccinations.’

What are blood clots and why should we care?

Blood clots are lumps of solid blood that form inside veins and arteries, which they shouldn’t do.

The clotting process is normal and vital for the body to heal itself when it gets injured, such as when skin is cut and blood congeals and forms a scab.

But if this happens inside blood vessels it can lead to serious damage to the internal organs. If a clot forms on the wall of a vessel and doesn’t move it is less serious than one that moves around the body.

Blood clots that travel around the body can cause damage in any organ that they lodge in, because they can block the flow of blood and starve it of oxygen.

Symptoms of blood clots include pain, tenderness and swelling. They most commonly develop in the legs and may then move to other bits of the body.

Experts say around 3,000 people develop a blood clot each month in the UK.

Covid-19 is known to cause blood clotting in almost everyone who gets seriously ill with it which suggests that, for many people, even the risk of a clot being caused by a vaccine would be smaller than the risk of catching coronavirus. 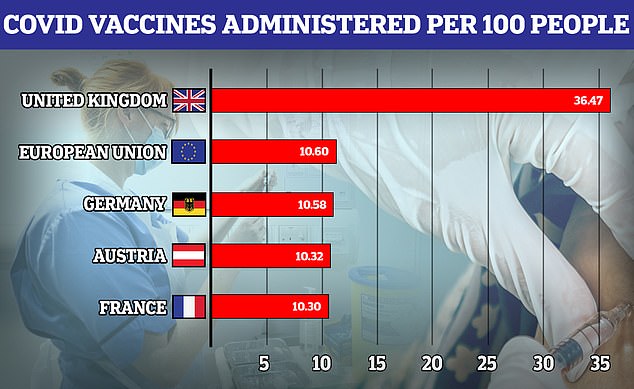 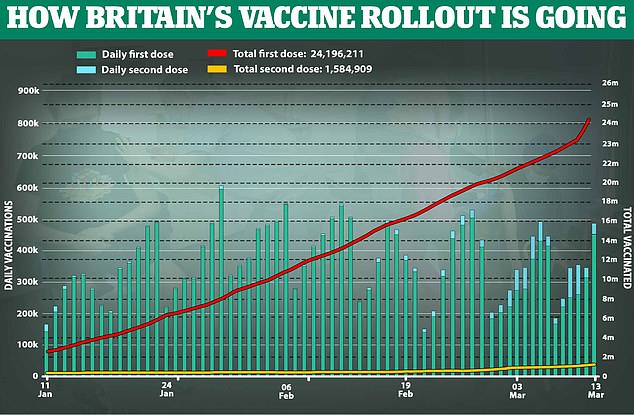 The decision by some countries to halt the vaccine came after a nurse in Austria, 49, died from a clot on Monday shortly after receiving the vaccine amid reports of similar cases across Europe, despite millions of doses being administered safely.

Austria, Estonia, Latvia, Lithuania and Luxembourg have also suspended the use of the same specific batch of vaccines given to the nurse, ABV5300, which was sent to 17 European countries and consisted of one million jabs.

Denmark, Norway and Iceland on Thursday went further, suspending the total use of AstraZeneca’s Covid-19 vaccine.

Italy’s medicine regulator banned a different batch of the jabs, ABV2856, after non-commissioned naval officer Stefano Paternò died of a cardiac arrest 24 hours after receiving a dose in Sicily, where a second man also died after receiving the jab.

Regulators in the UK, which has used more doses of the vaccine than anywhere else, insist there is no reason to believe the Europeans’ deaths are linked to the vaccine. They say it was coincidence that those people had recently had the jab.

What do scientists say about the blood clotting row?

Dr Simon Clarke, a microbiologist at the University of Reading, said it was ‘reckless’ to simply stop using the vaccine.

He said in a tweet: ‘I keep hearing the phrase “abundance of caution” being used in reference to countries pausing rollout of [the Oxford vaccine] but is it really caution?

‘Isn’t it actually reckless to expose your population to Covid-19 unnecessarily? Data needed or carry on vaccinating.’

And Professor Pollard, who ran the clinical trials of Oxford’s vaccine, added on BBC Radio 4: ‘A lot of stuff happens to people all the time in normal times and, in the case of blood clots here in the UK, we see about 3,000 cases of blood clots happening every month.

‘So, when you then put a vaccination campaign on top of that, clearly those blood clots still happen and you’ve got to then try and separate out whether – when they occur – they are at all related to the vaccine or not.’

He said it was ‘very clearly’ shown in MHRA reports that blood clots were not happening any more often than they normally would.

Professor Pollard added: ‘It’s absolutely critical that we don’t have a problem of not vaccinating people and have the balance of a huge risk – a known risk of Covid – against what appears so far from the data that we’ve got from the regulators – no signal of a problem.’

Professor David Spiegelhalter, a statistician at the University of Cambridge, said in a Guardian column that the links between the jabs and the blood clots could be ‘the basic and often creative urge to find patterns even where none exist’.

He said: ‘Deep vein thromboses (DVTs) happen to around one person per 1,000 each year, and probably more in the older population being vaccinated.

‘Working on the basis of these figures, out of 5 million people getting vaccinated, we would expect significantly more than 5,000 DVTs a year, or at least 100 every week. So it is not at all surprising that there have been 30 reports.’

And Professor Spiegelhalter added: ‘So far, these vaccines have shown themselves to be extraordinarily safe.

WHAT IS A BLOOD CLOT?

The same process that heals a wound can be deadly if it occurs inside the body.

A blood clot is a clump of blood that has changed from a liquid to a gel-like or semisolid state. Clotting is a necessary process that can prevent you from losing too much blood in certain instances, such as when you’re injured or cut.

When a clot forms inside one of your veins, it won’t always dissolve on its own. This can be a very dangerous and even life-threatening situation.

An immobile blood clot generally won’t harm you, but there’s a chance that it could move and become dangerous. If a blood clot breaks free and travels through your veins to your heart and lungs, it can get stuck and prevent blood flow. This is a medical emergency.

Certain risk factors increase your chances of having a blood clot. A recent hospital stay, especially one that’s lengthy or related to a major surgery, increases your risk of a blood clot.

Common factors that can put you at a moderate risk for a blood clot include: