Drinking alcohol is prohibited in space but that hasn’t stopped some intrepid crew members from smuggling hooch into orbit.

Russian cosmonauts have admitted they’ve smuggled bottles of cognac in their space suits, in intentionally mislabeled ‘juice’ bottles and even inside hollowed-out books.

One cosmonaut hid a bottle in the wristband of a device used for measuring blood pressure.

Some Russian astronauts have also gone on crash diets before blastoff so they can sneak a bottle into their spacesuit without exceeding weight requirements.

In the 1990s, a photo surfaced of cosmonauts at a ‘cognac party’ aboard the Mir space station, taken by NASA astronaut.

Alexander Lazutkin (far left) and other Russian crew members drinking cognac about the Mir space station in 1997. Former cosmonauts have admitted to sneaking alcohol aboard missions in their space suits, in mislabeled ‘juice’ containers and even in hollowed-out books

Officially, drinking alcohol is prohibited on the International Space Station (ISS) because its main ingredient, ethanol, is a volatile compound that could damage the station’s delicate equipment.

But it can also cause problems when going to the bathroom.

‘Use of alcohol and other volatile compounds are controlled on ISS due to impacts their compounds can have on the station’s water recovery system,’ a NASA spokesperson told the BBC in 2017. 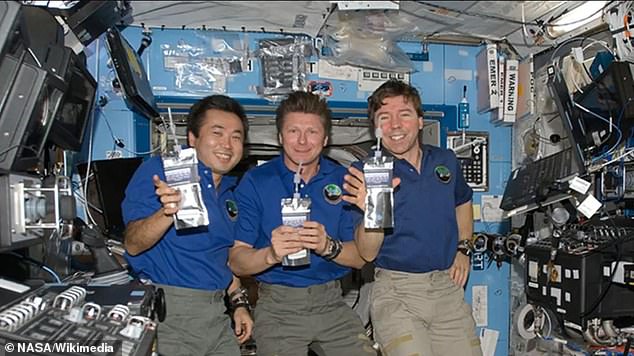 NASA crew members drinking water aboard the ISS. Alcohol is banned aboard the space station because it could damage sensitive equipment. It could also cause astronauts to tax the station’s toilets

‘During prolonged space missions, especially at the beginning of the Space Age, we had alcoholic drinks in the cosmonauts’ rations,’ former cosmonaut Alexander Lazutkin told Interfax in 2010. 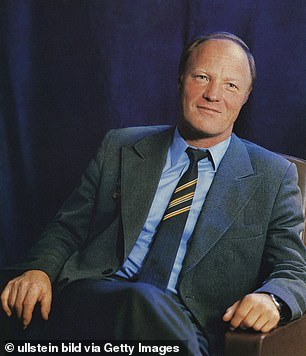 Cosmonaut Igor Volk said he and other crew members lost weight right before boarding the Salyut 7, a precursor to Mir, so they could hide alcohol in secret pouches in their spacesuits without being detected

Doctors had actually recommended the cognac, Lazutkin claimed, ‘to stimulate our immune system and on the whole to keep our organisms in tone.’

But eventually Roscosmos, the Russian space agency, prohibited alcohol and the crews had to get creative.

Cosmonaut Igor Volk said he and others lost weight right before boarding the Salyut 7, a precursor to Mir, so they could hide alcohol in secret pouches in their spacesuits without being detected.

‘A week before the launch we didn’t eat anything except bread and tea, and we lost almost [4.4 pounds],’ he told Beyond Russia. ‘We packed everything in little cellophane bags and when we were being dressed, we placed the bags in the spacesuits.’

Volk said he even hollowed out a book and stashed a bottle of cognac inside.

‘It was a thick book, and you’d remove the cover and instead of the pages you put in a bottle; about a liter and a half could fit. The most important thing is that it doesn’t gurgle.’ 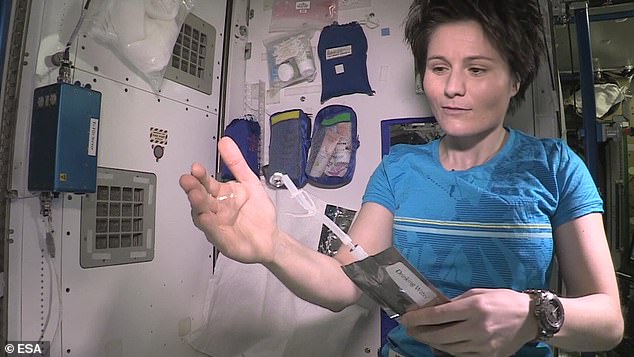 Astronaut Samantha Crisoforetti drinking water on the ISS.  At the height of the Space Race in the 1960s, NASA crews would sometimes sneak alcohol aboard their capsules

Valery Ryimin revealed that, before one mission, he took a dozen bottles of Armenian cognac and poured them into plastic bags with screw-top caps, then stashed them in his flight suit.

He told Russia Beyond that drinking even just a tiny drop of alcohol in space calms you down and eliminates tension.

Unlike on Earth, it helps you fall asleep faster and you wake up refreshed and ready to go the next day.

‘I am convinced that it’s necessary to legalize alcohol in space in small quantities, for example, as a sedative,’ Ryimin said.

Inspectors have found ‘dozens of caches’ of booze in various Russian space stations, Beyond Russia reported.

Roscosmos official Vyacheslav Rogozhnikov said nearly every cosmonaut has a trick for getting alcohol onto the space station.

‘This is categorically forbidden, but alcohol still appears,’ he told the site. ‘I don’t know where it comes from.’

Chris Carberry, author of Alcohol in Space, says that Roscosmos really just turns a blind eye to the subterfuge. 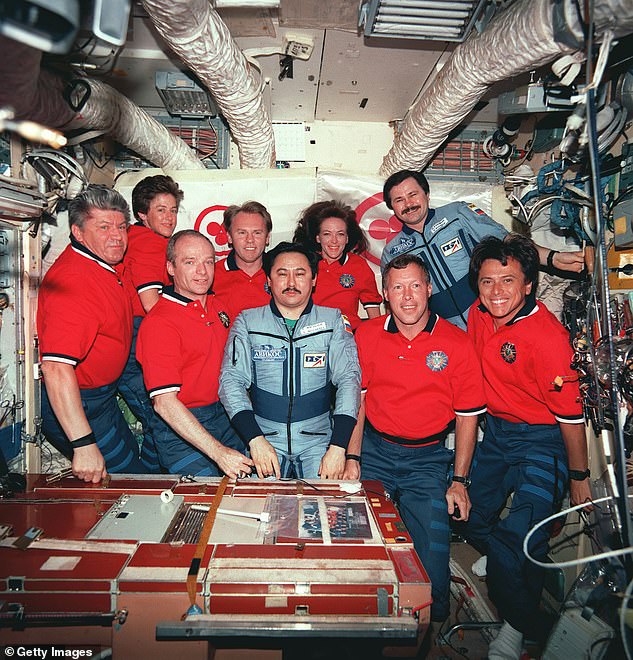 Valery Ryimin (far left) said that, before one mission, he took a dozen bottles of Armenian cognac and poured them into plastic bags with screw-top caps, then stashed them in his flight suit. ”I am convinced that it’s necessary to legalize alcohol in space in small quantities, for example, as a sedative,’ Ryimin said

‘In orbit, people have a very difficult emotional state,” A Russian Ministry of Health official told him, according to Supercluster. ‘If before sleep, the guys drink 5-7 grams [about a quarter of a tablespoon] of cognac, I support it.’

And some NASA astronauts are reportedly willing to join their Russian colleagues in a tipple or two.

‘NASA will tell you there is no alcohol aboard the ISS,’ astronaut Clayton Anderson told Carberry. ‘As a person who lived there for five months, I’ll tell you that’s bogus.’

The agency tried to block NBC News from releasing a photo of cosmonauts at a 1997 ‘cognac party’ aboard Mir, but was unsuccessful.

The photo — which showed Lazutkin and other cosmonauts drinking from pouches, was taken by NASA astronaut Jerry Linenger, who claimed he declined to join them.

At the dawn of the Space Age, the restrictions on alcohol weren’t so strict. 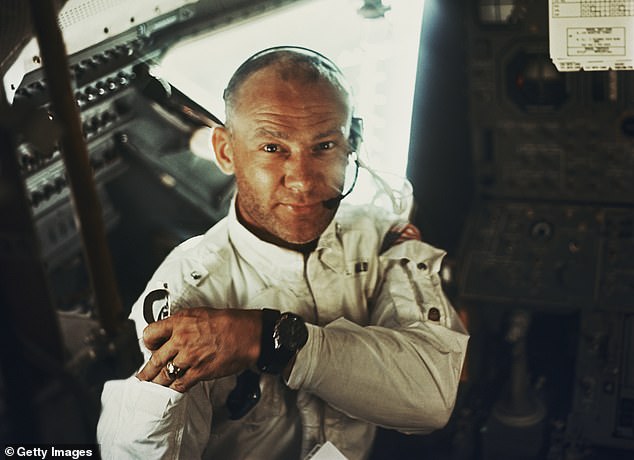 Buzz Aldrin in the lunar module during NASA’s Apollo 11 lunar landing mission. Aldrin performed communion with wine and bread inside the module on the surface of the Moon

In his autobiography, Schirra’s Space, Mercury astronaut Wally Schirra claimed another space jockey snuck a pack of cigarettes and a small bottle of Cutty Sark into their capsule before takeoff.

According to Apollo 8 captain Frank Borman, a fellow crew member put brandy in their Christmas meal kit before the 1968 mission.

‘I didn’t think it was funny at all,’ Borman said in a 1999 interview. ‘If we’d have drunk one drop of that damn brandy and the thing would have blown up on the way home, they’d have blamed it on the brandy.’

Buzz Aldrin claims he took communion inside the lunar lander module in his and Neil Armstrong’s iconic 1969 Moon landing.

‘I poured the wine into the chalice our church had given me,’ he told Guideposts magazine in 1970. ‘In the one-sixth gravity of the moon the wine curled slowly and gracefully up the side of the cup. It was interesting to think that the very first liquid ever poured on the moon, and the first food eaten there, were communion elements.’ 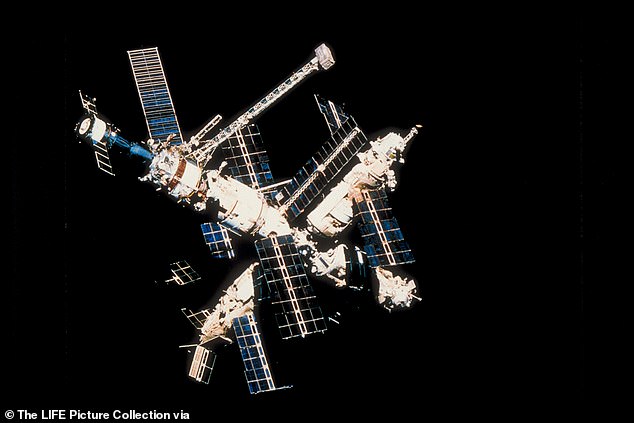 Inspectors have found ‘dozens of caches’ of booze in various Russian space stations, including the now-defunct Mir

Aldrin got NASA’s blessing to bring the wine aboard Apollo 11 but the rite was never broadcast to ground control, The Guardian reported.

When NASA launched Skylab in 1973, the agency considered putting sherry on the menu.

How do astronauts drink in space?

Astronauts don’t usually allow liquids to float around the International Space Station to prevent any damage to delicate equipment.

Instead they have specially adapted tubes that allow them to drink without the liquid floating around.

Crews aboard the ISS drink water that comes from the ambient cabin’s humidity, which is eventually condensed and returned to the water supply.

The water is filtered from recycled shower water, astronaut sweat and urine.

But the smell of the fortified wine made some crew members gag, the BBC reported, and the public didn’t like the idea of astronauts getting buzzed in space.

Alcohol has officially been banned by NASA ever since.

Astronauts ‘kind of represent a form of purity,’ Skylab veteran Edward G. Gibsontold the Milwaukee Journal in 1972. ‘As soon as you taint that purity with alcohol, [people] really get upset.’

It’s not clear if the rest of the world endorses prohibition in space:

Jeremy Curtis, head of education at the United Kingdom Space Agency told The Evening Standard in 2017 that spirits are among the ‘treats’ astronauts are allowed to take with them.

NASA has had scientists attempt to brew beer in space but drinking a Budweiser on the space station could be problematic.

Without gravity, the foam wouldn’t settle at the bottom of your stomach and you could wind up with hiccups, burps or an upset stomach.

Whiskey was sent to the station in 2011 to see how microgravity impacted the aging process: According to NASA, the atmosphere impacted the wood chips used in the process, creating noticeable differences in aroma and taste.

The whiskey was never consumed on the station—at least not officially.

‘I think NASA is largely afraid that the public will view it as dangerous or a waste of taxpayer dollars,’ Carberry said. ‘There’s a big chunk of society who are just inherently opposed to alcohol.’

Astronauts are technically even prohibited from drinking alcohol 12 hours before a mission but a 2007 review by NASA’s Astronaut Health Care System Review Committee revealed that crews preparing to fly on the space shuttle had been known to drink excessively before blastoff.

In congressional hearings, the committee cited two instances where astronauts were so intoxicated prior to takeoff that fellow astronauts or medical staff raised concerns about their ability to perform their duties.

In both cases, the individuals were still permitted to fly.

‘Just to do what they are attempting requires pushing things to the limits, doing things nobody has ever done before,’ Berendzen said. ‘If you add irresponsible behavior akin to a teenager on a wild night out, you’ve got trouble.’

While astronauts may need to be razor sharp to conduct their duties, experts don’t believe indulging in zero-gravity increases the effects of intoxication: An FAA study indicated astronauts who had consumed vodka performed as well at 12,500 feet as they did on the ground.