Astronauts venturing to the moon and Mars are at a higher risk of getting sick from antibiotic resistant superbugs that breed in space, experts find

Astronauts are more likely to get ill from antibiotic-resistant bugs in space than they normally would on Earth.

They might also find it harder to shake off the infections too, experts say, after studying the behaviour of bacteria in simulated space conditions.

With astronauts venturing to the moon and Mars more in the future, scientists are worried about how to keep them safe and healthy on such long haul trips under foreign environments.

It’s a bigger challenge than usual to keep astronauts healthy onboard spacecraft if bugs develop antibiotic resistance, given no additional medical assistance can be offered.

With astronauts venturing to the moon and Mars more in the future, scientists are worried about how to keep them safe and healthy such long haul trips under unfamiliar conditions

Scientists at the University of Houston, Texas, studied antibiotic resistance of E.coli in space by emulating similar environments in the lab.

They grew a harmless strain of E.coli that had been sterilised with the antibiotic chloramphenicol in a simulated environment of microgravity.

After the bacteria had grown for 1,000 generations, the researchers found that they had become resistant to chloramphenicol as well as several other antibiotics.

Even after removing the initial antibiotics that caused the bugs to mutate and therefore become resistant, the bugs failed to lose the resistance after a further 100 generations.

The results are potentially a huge problem for future space missions, given that space voyages can span from months to years.

The long-term response of microbial communities to the microgravity environment of space is not yet fully understood.

But under the conditions found in space, where microbial contamination risks among others are higher, the chances of pathogen infection increases significantly.

One of the lead researchers on the study, Madhan Tirumalai, said: ‘When you’re going to be in space for more than six months, bacteria are subject to several thousand generations of growth.’ 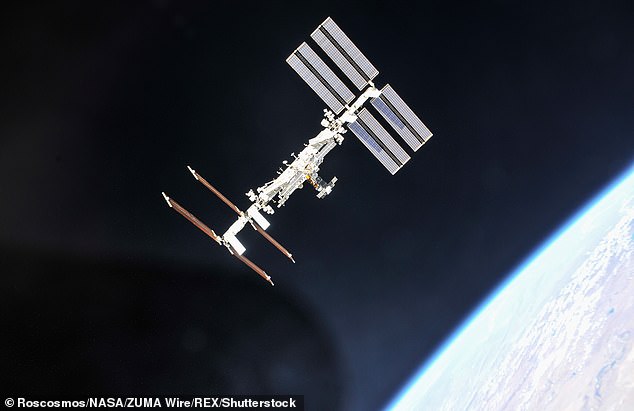 They might also find it harder to shake off the infections too, experts say, after studying the behaviour of bacteria in simulated space conditions (stock image)

The World Health Organization has previously warned if nothing is done the world was headed for a ‘post-antibiotic’ era.

It claimed common infections, such as chlamydia, will become killers without immediate answers to the growing crisis.

Bacteria can become drug resistant when people take incorrect doses of antibiotics, or they are given out unnecessarily.

Figures estimate that superbugs will kill ten million people each year by 2050, with patients succumbing to once harmless bugs.

In September, the World Health Organisation warned antibiotics are ‘running out’ as a report found a ‘serious lack’ of new drugs in the development pipeline.

Without antibiotics, caesarean sections, cancer treatments and hip replacements would also become incredibly ‘risky’, it was said at the time.

Resistance develops in response to antibiotics and could emerge rapidly if the astronauts come into contact with even a small amount before the mission starts.

That’s because the bacteria would multiply inside the spacecraft over the course of the mission, giving them ample time to develop resistance to any treatments given.

Resistance can also occur if tiny amounts of antibiotics are present in the spacecraft before the mission takes off.

Previous studies have shown that when exposed to conditions in space, bacterial mutation can become ‘overcharged’ as they adapt to their new environment.

Scientists at NASA previously discovered that five different varieties of Enterobacter were found in the ISS’s toilet and exercise area.

The full findings of the latest study were published in the American Society for Microbiology.