Astronomers have found a rocky, Earth-like world with three red suns — one of which would look enormous in its skies — a mere 22.5 light years away from the Earth.

Each of the three stars is a so-called M dwarf — active, but smaller in size than our sun — that circle around each other in a complex orbits

Astronomers have found an Earth-like world with three red suns — one of which would look enormous in its skies — a mere 22.5 light years away from the Earth. Pictured, an artist’s impression of a similar planet in a trinary star system

The world was spotted by astronomer Jennifer Winters of the Harvard-Smithsonian Center for Astrophysics and colleagues by looking for the periodic dimming of light from the main star as the planet repeatedly passes — or transits — in front of it.

The planet — which has been named LTT 1445Ab — orbits close to the primary star, at just one-tenth of the distance between the Sun and Mercury.

‘The primary star would look really big in the sky. It’s really close,’ she added.

‘The other two are much farther away. They’d look about 100 times brighter than Venus, and about the same size in the sky.’

At present, researchers are unsure when and how the three suns would appear to rise if viewed from the surface of LTT 1445Ab, as it is not clear at what angle or speed the exoplanet is turning.

However, further studies of the orbits of the three stars may be able to discern this in the future.

To date, LTT 1445Ab is the second-closest exoplanet to Earth spotted using the transiting detection method — and the nearest that orbits an M dwarf star.

Although the planet is freshly-discovered, scientists have known about the three stars for decades.

‘The reason we probably haven’t found [LTT 1445Ab] before is because it is in this triple system,’ said Dr Winters.

‘A lot of these planet-search surveys avoid these kinds of systems.’

The reason for this, Dr Winters told Live Science, is that have multiple stars in the same system — and, accordingly, extra sources of light — can make picking out the signal of a transiting planet very difficult. 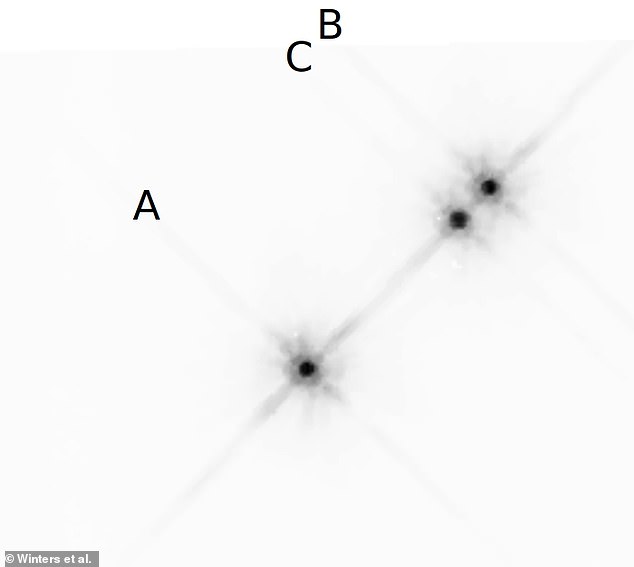 Each of the three stars, seen here in inverted colours, is a so-called M dwarf — active, but smaller in size than our sun — that circle around each other in a complex orbits

Dr Winters was attracted to the three-star system because of her research focus on M dwarf stars which, until recently, had not attracted much interest from exoplanet hunters.

These kinds of stars, she told Live Science, go through a long period of ‘adolescence’ in which they are highly active and emit considerable amounts of radiation.

‘We don’t know yet if planets’ atmospheres are able to survive the high-radiation environment of an M dwarf when it’s really young, so this is going to be an amazing opportunity to study that,’ Dr Winters told Live Science.

‘As [the planet] passes in front of its host star, it is backlit by the light from its host star and we can study the types of molecules that are in its atmosphere — if it has an atmosphere.’

A pre-print of the article, which has not yet been peer-reviewed, can be read on the arXiv repository.

WHAT IS THE TESS SPACECRAFT?

NASA’s new ‘planet hunter,’ set to be Kepler’s successor, is equipped with four cameras that will allow it to view 85 per cent of the entire sky, as it searches exoplanets orbiting stars less than 300 light-years away.

By studying objects much brighter than the Kepler targets, it’s hoped TESS could uncover new clues on the possibility of life elsewhere in the universe.

Its four wide-field cameras will view the sky in 26 segments, each of which it will observe one by one.

In its first year of operation, it will map the 13 sectors that make up the southern sky.

Then, the following year, it will scour the northern sectors.

‘We learned from Kepler that there are more planets than stars in our sky, and now TESS will open our eyes to the variety of planets around some of the closest stars,’ said Paul Hertz, Astrophysics Division director at NASA’s Headquarters.

‘TESS will cast a wider net than ever before for enigmatic worlds whose properties can be probed by NASA’s upcoming James Webb Space Telescope and other missions.’

Tess is 5 feet (1.5 meters) wide and is shorter than most adults.

The observatory is 4 feet across (1.2 meters), not counting the solar wings, which are folded for launch, and weighs just 800 pounds (362 kilograms).

NASA says it’s somewhere between the size of a refrigerator and a stacked washer and dryer.

Tess will aim for a unique elongated orbit that passes within 45,000 miles of Earth on one end and as far away as the orbit of the moon on the other end.

It will take Tess two weeks to circle Earth.