Astronomers have witnessed the beginnings of a huge cosmic pileup that may have created a mega-galaxy.

The discovery was made using the world’s most powerful telescopes to peer 90 per cent of the way across the observable universe.

The protocluser is 12.4 billion light-years away and its light started traveling to us when the universe was only 1.4 billion years old.

Calculations suggest that by the present day, hundreds more galaxies would have been eaten up by the cluster.

It could have a mass equivalent to 1,000 trillion suns, which would make a galaxy that is the largest known object in the universe.

ALMA, one of the telescopes in Chile, was used to spot and predict the movements of 14 galaxies that merged into one. The images were spotted more than 90 per cent across the universe, 12.4 billion years ago

Astronomers believe there are  at least 14 galaxies packed into an area only four times the diameter of the Milky Way’s galactic disk.

Its individual galaxies are forming stars as much as 1,000 times faster than our home galaxy.

The resulting galaxy cluster will rival some of the most massive clusters we see in the universe today.

This extreme level of congestion and star birth rate is unprecedented.

‘[It] seems like we’re catching a cluster in the process of being assembled,’ says study co-author Chris Hayward, an associate research scientist at the Center for Computational Astrophysics at the Flatiron Institute in New York City.

‘This is the missing link in our understanding of how clusters form.’

Using mathematical models based on real observations, an international team of scientists has been able to predict the cluster’s movement.

However, how the assembly of galaxies became so big so fast ‘is a bit of a mystery,’ says study co-author Scott Chapman, Professor in astrophysics at Dalhousie University. 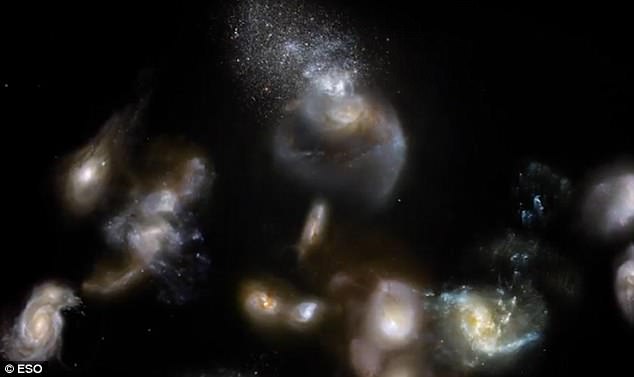 In total, the protocluster contains around 10 trillion suns’ worth of mass and formed around 1.4 billion years after the Big Bang, far earlier than it was previously thought to happen

‘It wasn’t built up gradually over billions of years, as you might expect,’ explains Tim Miller, a PhD candidate at Yale University and lead author of one of the papers.

‘This discovery provides an incredible opportunity to study how galaxy clusters and their massive galaxies came together in these extreme environments.’

Current theoretical and computer models suggest that protoclusters as massive as this one should have taken much longer to evolve.

Astronomers previously thought that these events occurred around three billion years after the Big Bang.

When they realised they were occurring at half that age, scientists rushed to find  a new explanation. 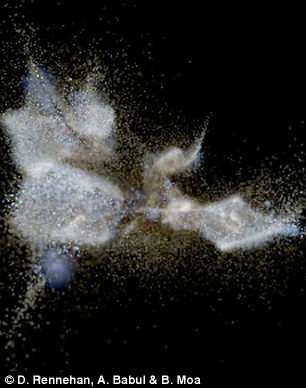 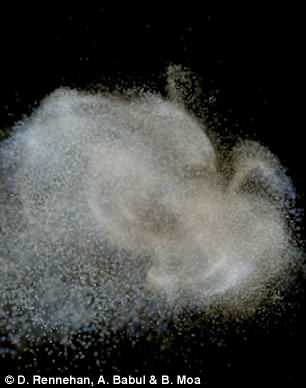 Using mathematical models based on real observations, an international team of scientists has been able to predict the cluster’s movement over millions of years (pictured)

‘Having caught a massive galaxy cluster in throes of formation is spectacular in and of itself,’ said Scott Chapman, an astrophysicist at Dalhousie University in Halifax, Canada.

‘But, the fact that this is happening so early in the history of the universe poses a formidable challenge to our present-day understanding of the way structures form in the universe,’ he said.

The galaxy cluster was first spotted using the South Pole telescope and the Herschel space observatory.

Astronomers then used the Atacama large millimeter/submillimeter Array (Alma), a telescope comprising 66 antennas spread over in the Chilean Andes, to make more observations. 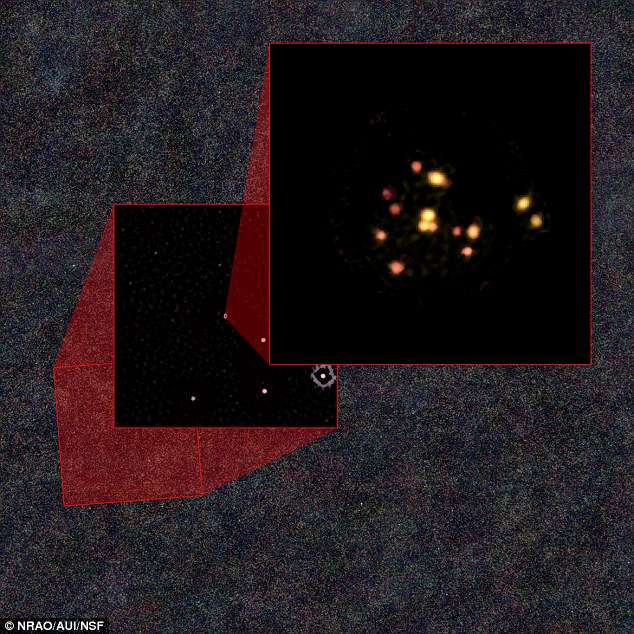 The 14 blobs of light seen on the right are the galaxies that were swirling around one another in extreme proximity. These were taken by the ALMA telescope after first being spotted by the lower-resolution images taken from the South Pole Telescope in Antarctica (left) 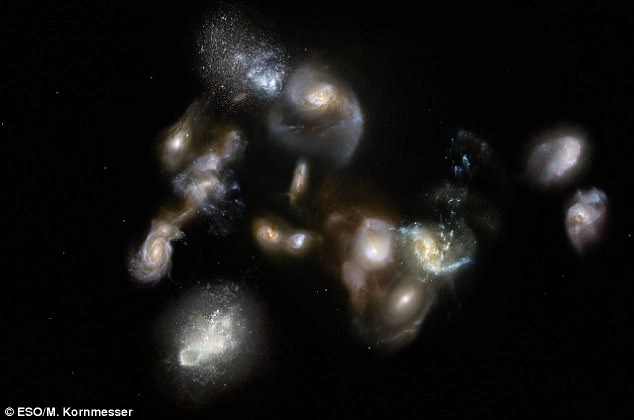 This pictured artists impression shows what the galaxies would look like as they swirl around one another. Mathematical models predict that a mega-merger would form a galaxy cluster – one of the biggest structures in the universe 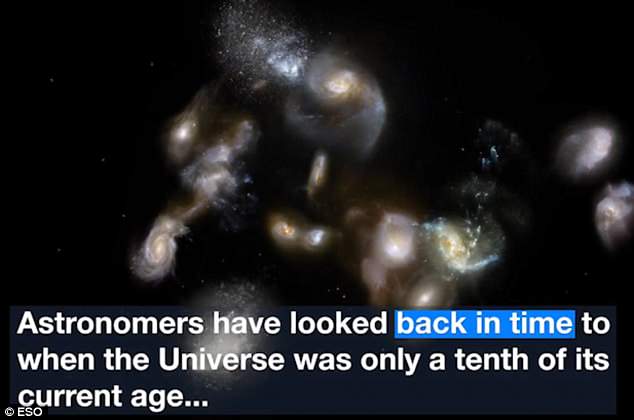 The individual galaxies are forming stars as much as 1,000 times faster than our home galaxy and are crammed inside a region of space only about three times the size of the Milky Way 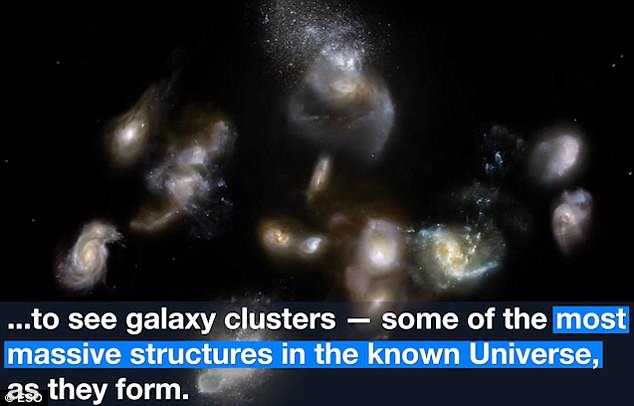 Despite being 12.4 billion light years away, researchers observed the galaxy protocluster, named SPT2349-56 90 per cent of the way across the vast, and infinite, Universe 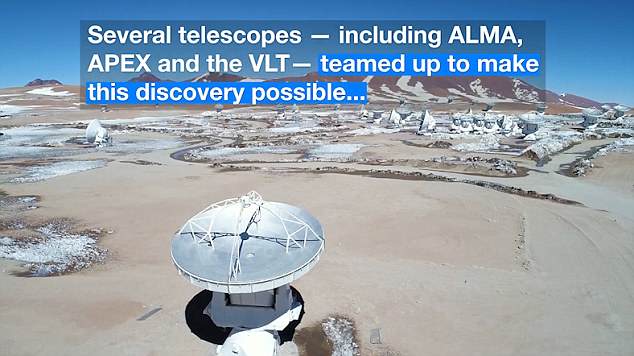 This mammoth, but very distant protocluster, was first seen during a follow-up to a survey conducted using the South Pole Telescope in Antarctica. high resolution images were then taken by the ALMA telescope in Chile

After a follow-up with the high-powered Chilean telescopes, the number of baby galaxies seen in the distant cloud rapidly increased.

‘It just hit you in the face because all of a sudden there are all these galaxies there,’ Dr Chapman says.

‘We went from three to 14 in one fell swoop. It instantly became obvious this was a very interesting, massive structure forming and not just a flash in the pan.’