A black hole almost 8,000 light years away from Earth has caught the eye of astronomers, due to its peculiar, wobbly nature.

Called V404 Cygni, the black hole was spotted ejecting high-speed clouds of plasma in a manner that’s never been seen before by scientists.

V404, like other black hole systems, was sucking up gas from a nearby star.

And while black holes have been known to spit out matter, researchers observed V404’s jets shooting out plasma in rapid succession.

A black hole almost 8,000 light years away from Earth has caught the eye of astronomers, due to its wobbly nature. Called V404 Cygni, it was spotted ejecting high-speed clouds of plasma

Scientists likened the strange phenomenon to the ‘wobble of a spinning top,’ as it spun rapidly over the span of just a few hours.

The study, which was led by the International Center for Radio Astronomy Research (ICRAR), was published today in the journal Nature.

Scientists believe the spinning jet came about as a result of a misalignment between an accretion disk created by the star’s matter and the black hole.

Intense radiation caused the inner part of the accretion disk to ‘puff up into a doughnut shaped structure,’ resulting in it spinning like a top. 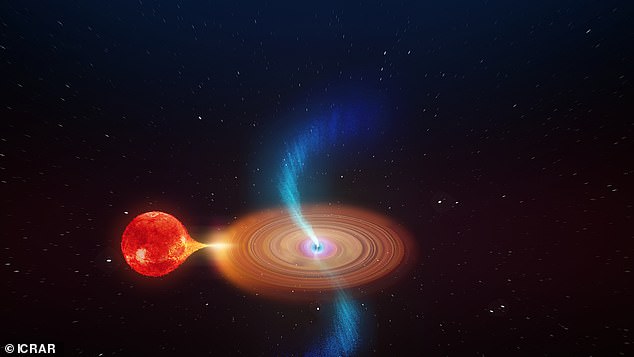 Pictured is an artist’s impression of V404 Cygni, with the nearby star seen to the left. The black hole in the center pulls gas toward it and expels plasma in long jet streams 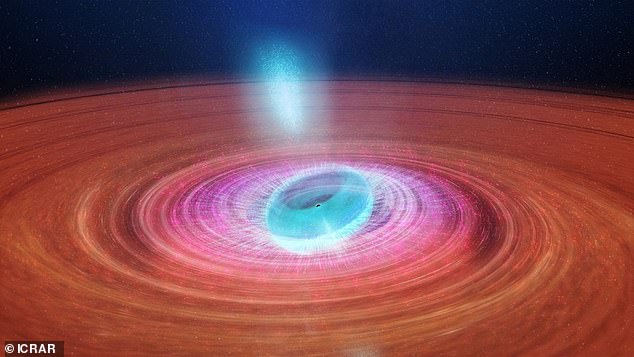 Another artist’s impression shows the black hole system. Scientists believe the spinning jet came about as a result of a misalignment between an accretion disk and the star

‘This is one of the most extraordinary black hole systems I’ve ever come across,’ James Miller-Jones, a professor from the Curtin University in Australia and lead author of the study, said in a statement.

‘Like many black holes, it’s feeding on a nearby star, pulling gas away from the star and forming a disk of material that encircles the black hole and spirals towards it under gravity. 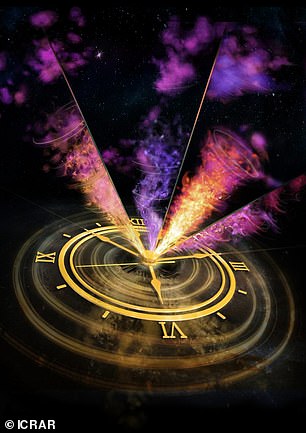 Pictured is the changing orientation in Cygni, with each clock hand showing the jet at a different time (artist’s impression)

‘What’s different in V404 Cygni is that we think the disk of material and the black hole are misaligned.

‘This appears to be causing the inner part of the disk to wobble like a spinning top and fire jets out in different directions as it changes orientation,’ he added.

As the black hole system continued to spin, it dragged space and time along with it, otherwise known as gravity.

Scientists first discovered Cygni in 1989, when it released a massive outburst of jets and radiation, according to ICRAR.

They located the system in the Cygnus constellation, which is approximately 7,800 light years away from Earth.

Cygni experienced another bright outburst in 2015 that lasted for two weeks, which also caught the eye of astronomers.

They continued to observe the system with the Very Long Baseline Array, a network of radio telescopes, but they were only able to capture the jet activity as a blur. 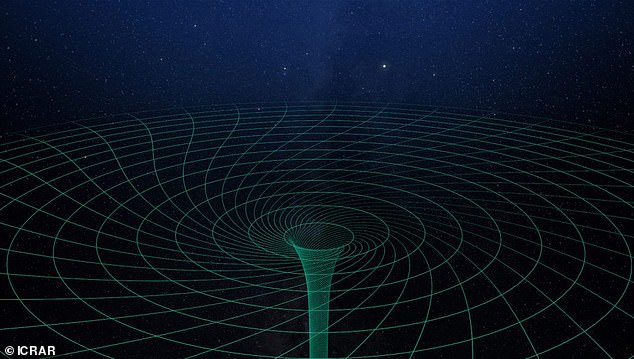 An artist’s impression of twisted space-time around the spinning black hole. As the black hole spins, it causes the accretion disk to ‘puff up’ and create a doughnut-like shape

‘These jets were changing so fast that in a four-hour image we just saw a blur,’ Alex Tetarenko, a co-author of the study and PhD graduate from the University of Alberta, said in a statement.

‘It was like trying to take a picture of a waterfall with a one-second shutter speed.’

To see the phenomenon more clearly, they ended up taking 103 individual images and piecing them together to make a movie.

Scientists hope their findings will help them understand other ‘extreme events’ in the universe.

‘Anytime you get a misalignment between the spin of a black hole and the material falling in, you would expect to see this when a black hole starts feeding very rapidly,’ Gemma Anderson, a professor at Curtin University and co-author of the study, explained.

‘That could include a whole bunch of other bright, explosive events in the Universe, such as supermassive black holes feeding very quickly or tidal disruption events, when a black hole shreds a star.’