Seen through the eyes of the Cassini spacecraft, Saturn and its many moons seem silent fixtures in the vast emptiness of space.

But, with dozens of natural satellites and a ‘sounding board’ of rings swirling around its center, experts say there’s no place in the solar system more abuzz with resonance than Saturn.

Based on the orbital motion of the objects circling the ringed planet, a team of astrophysicists has created the soundtrack of Saturn, revealing the hidden notes and rhythms of frequencies typically imperceptible to human ears.

The first song follows Cassini’s ‘death dive,’ as it flies over the ring system and plunges into Saturn itself – a moment marked by a final, crashing piano chord. In the second piece, they brought to life the scales of Janus and Epimetheus – the only 1:1 resonance in the solar system

Cassini has circled Saturn for 13 years since reaching its orbit in 2004, spearheading remarkable discoveries about the ringed planet and its icy moons – but now, it’s running low on fuel.

On April 22 the spacecraft began to transition into its grand finale orbits, taking one last close flyby of Saturn’s massive moon Titan.

Titan’s gravity bent Cassini’s flight path, causing the orbit to shrink until it was on course to pass between Saturn and the inner edges of its rings.

Cassini then began the first of 22 dives through an unexplored gap before it ultimately plunges through the skies of Saturn to end its mission as ‘part of the planet itself.’

Cassini’s mission will officially terminate on September 15, after a planned plummet through Saturn’s atmosphere.

And, all the while, it will transmit data from several instruments until the signal is finally lost.

The eerie songs of Saturn come just two weeks before NASA’s Cassini mission comes to a dramatic end, after 13 years observing the planet.

In homage to the historic mission, the researchers from the Canadian Institute for Theoretical Astrophysics (CITA) created two pieces of music based on Saturn’s moons and rings.

This relies on a phenomenon known as orbital resonance, in which two objects carry out different numbers of orbits at the same time, allowing them to stick to the same initial configuration.

As the objects remain locked in this repeating pattern, they exert rhythmic gravitational tugs, which can then be converted into musical harmony.

‘Wherever there is resonance there is music, and no other place in the solar system is more packed with resonances than Saturn,’ said astrophysicist Matt Russo, a postdoctoral researcher at the CITA in the Faculty of Arts and Science at U of T.

In addition to Saturn’s major moons, the songs incorporate the notes and rhythms from trillions of tiny particles in its vast ring system.

‘Saturn’s magnificent rings act like a sounding board that launches waves at locations that harmonize with the planet’s many moons, and some pairs of moons are themselves locked in resonances,’ says astrophysicist Dan Tamayo, a postdoctoral researcher at CITA and the Centre for Planetary Sciences at U of T Scarborough.

For the first song, the team used a numerical simulation of Saturn’s six large inner moons to play their corresponding musical notes every time a moon completed an orbit.

Based on the orbital motion of the objects circling the ringed planet, a team of astrophysicists has created the soundtrack of Saturn, revealing the hidden notes and rhythms of frequencies typically imperceptible to human ears 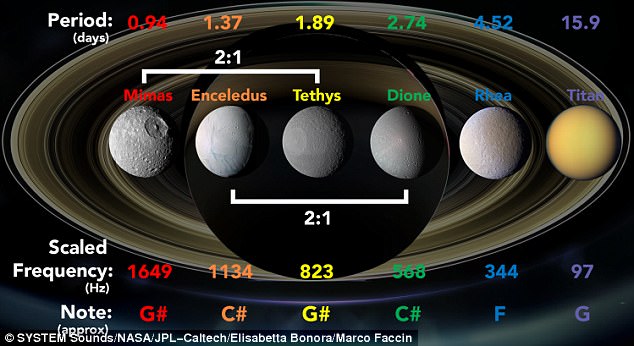 For the first song, the team used a numerical simulation of Saturn’s six large inner moons to play their corresponding musical notes every time a moon completed an orbit. Within these six inner moons, there are two orbital resonances

Saturn’s rings consist of countless small particles, ranging in size from micrometres to metres, that orbit the planet.

The ring particles are made almost entirely of water ice, with a trace component of rocky material.

They also contain features known as straw and propellers, which are caused by ‘clumping ring particles and small, embedded moonlets, respectively.’

But, in order to bring these sounds to a level detectable by human ears, the team had to increase the orbital frequencies by 27 octaves.

‘What you hear are the actual frequencies of the moons, shifted into the human hearing range,’ Russo says.

Within these six inner moons, there are two orbital resonances: a 2:1 resonance created by Mimas and Tethys (the first and third moons), and a 2:1 resonance linking Enceladus and Dione (the second and fourth moons).

This means that Mimas, for example, orbits twice for every orbit of Tethys.

According to the team, these two orbital resonances bring rhythm and harmony to the melody, which is otherwise unsteady.

‘Since doubling the frequency of a note produces the same note an octave higher, the four inner moons produce only two different notes close to a perfect fifth apart,’ says Russo, who is also a graduate of U of T’s Jazz performance program.

‘The fifth moon Rhea completes a major chord that is disturbed by the ominous entrance of Saturn’s largest moon, Titan.’

The first song follows the path of Cassini’s dramatic ‘death dive,’ as it flies over the ring system and ultimately plunges into Saturn itself – a moment marked by a final, crashing piano chord inspired by The Beatles’ ‘A Day in the Life’.

To accompany the music, the team also had made a large wood carving of Saturn’s rings, allowing listeners to follow along with their finger for a tactile-audio astronomy experience.

In the second piece of music, the researchers brought to life the scales of Janus and Epimetheus – the two small, irregular moons that share an orbit just outside of Saturn’s main rings. 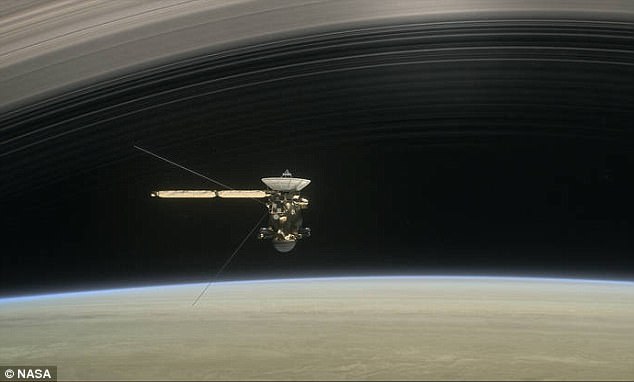 NASA’s Cassini spacecraft has begun its Grand Finale mission phase. Its mission will come to a dramatic end on September 15, when it plunges directly into Saturn’s atmosphere

This pairing is the only example of a 1:1 resonance in the solar system.

And, every four years, they swap places.

In the last few months of Cassini’s mission, where the composition picks up, Janus has begun to approach Epimetheus ahead of their 2018 switch.

‘Each ring is like a circular string, being continuously bowed by Janus and Epimetheus as they chase each other around their shared orbit,’ Russo said.