The manager of the Houston Astros, A.J. Hinch, has denied being involved in a heated barroom confrontation after his team lost the first game of the World Series.

Hinch addressed the rumors at a Thursday press conference as the series shifts to Houston, blasting a TMZ Sports report that cops were called to the team’s hotel on Tuesday as a ‘fabrication’.

That report cited sources who claimed that Hinch ‘snapped’ and began cursing and yelling at trash-talking Dodgers fans in the bar of the Pasadena, California hotel.

‘There was no altercation,’ Hinch said at the televised conference. ‘It’s a shame I get asked about some nonsense, some fabrications and non-stories, and I have to respond to it on a national stage.’

Astros skipper AJ Hinch spoke out at a press conference on Thursday, blasting a TMZ Sports report that he was involved in a bar altercation Tuesday as a ‘fabrication’

Pressed by reporters, Hinch said ‘fabrications really suck and I’m not going to address any of them,’ declining to comment further.

A person who spoke to Hinch after the incident similarly denied the incident, according to New York Post baseball columnist Joel Sherman.

‘No altercation,’ the source told Sherman, he tweeted. ‘Rude people at bar cursing and being disrespectful to women in #Astros party.’

The Astros team security were actually the ones to call the police, after people in the other group issued threats when they were removed from the bar, the source claimed. 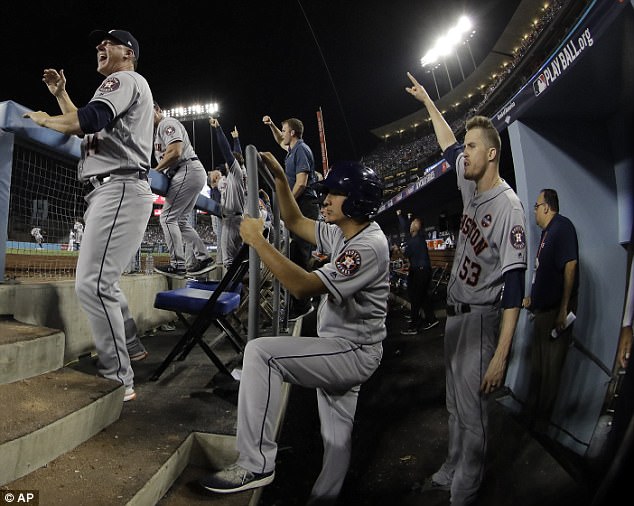 Hinch (left) was back to business the following day for Game 2. He’s seen celebrating a Jose Altuve home run in the 10th inning in the thrilling come-from-behind win for the Astros

The Pasadena Police Department told TMZ that they responded to an incident at the hotel around 10.30pm on Tuesday, but said there were no arrests or reports filed.

The Astros went on to win Game 2 the following day in extra innings, in a stunning come-from-behind victory that is already being called an instant classic.

The series moves to Houston on Friday for Game 3 with each team holding one win.