Yuli Gurriel will have to sit out for making a racist gesture toward Yu Darvish – but not during the World Series.

Major League Baseball suspended the Houston Astros first baseman on Saturday for the first five games next season. The punishment came a day after Gurriel’s actions toward the Los Angeles Dodgers pitcher during Game 3.

‘I understand that people may have different views,’ Commissioner Rob Manfred said.

‘But it was my best judgment that this timing was appropriate.’

‘I wanted the burden of this discipline to fall primarily on the wrongdoer,’ he said.

Baseball Commissioner Rob Manfred answers questions at a news conference before Game 4 of baseball’s World Series between the Houston Astros and the Los Angeles Dodgers Saturday, Oct. 28, 2017, in Houston. Manfred announced that Houston Astros’ Yuli Gurriel will be suspended five games without pay starting in the 2018 season

But when the player went up to bat during Game 4 of the World Series on Saturday, he received a huge standing ovation from fans.

The Cuban-born Gurriel pulled on the corners of his eyes after homering off Darvish during Houston’s 5-3 win Friday night. He also used a derogatory Spanish term in reference to Darvish, who was born in Japan.

‘I made an offensive gesture that was indefensible,’ Gurriel said in a statement released by the Astros.

‘I sincerely apologize to everyone that I offended with my actions. I deeply regret it.’ 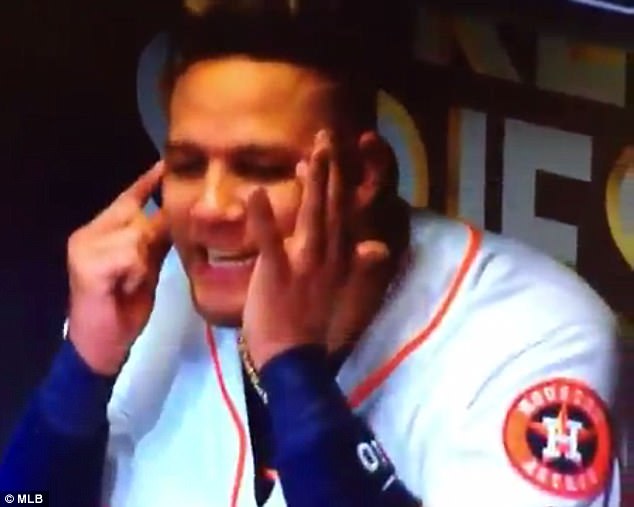 Gurriel said Friday that he wanted to meet with Darvish to express his regret. Manfred said there would be a private apology.

Gurriel will lose $322,581 of his $12 million salary next year, which the Astros will donate to charitable causes. He also will be required to undergo sensitivity training during the offseason.

Immediately after the game, Darvish said he was angry.

‘Acting like that, you just disrespect all the people around the world,’ he said in Japanese through a translator. 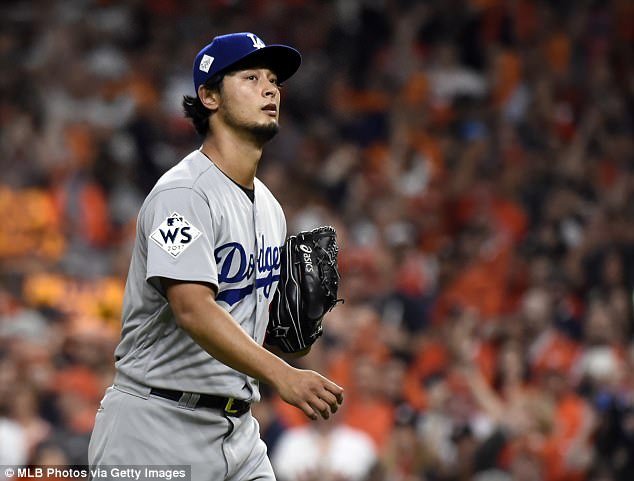 Gurriel said Friday that he wanted to meet with Darvish to express his regret. Manfred said there would be a private apology

Gurriel drew cheers when he batted in the second inning of Game 4 on Saturday night. He grounded into a double play.

The 33-year-old Gurriel played in Japan in 2014 and is completing his second season in the major leagues after leaving Cuba.

Darvish was born to a Japanese mother and an Iranian father. The four-time All-Star played professionally in Japan from 2005-11 before joining the Texas Rangers in 2012. He was sent to the Dodgers at this year’s July 31 trade deadline.

‘Yuli has always demonstrated respectful behavior and is extremely remorseful for his actions,’ Luhnow said. ‘Appropriately, Yuli has apologized for his gesture. He had no intention of offending anyone, but now recognizes the perceived offensiveness of his actions.’

‘That precedent is not adequate to deal with the current situation,’ Manfred said. ‘I’ve decided to go beyond that precedent as a statement of our disapproval of this behavior.’

Manfred said he was ‘impressed in my conversation with Yu Darvish by his desire to move forward, and I felt that moving the suspension to the beginning of the season would help in that regard.’

Said Manfred: ‘There is no place in our game for the behavior or any behavior like the behavior we witnessed last night.’ 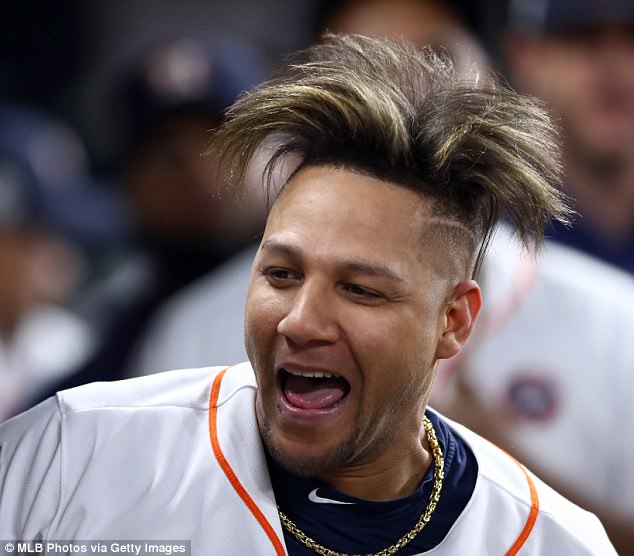 Gurriel will lose $322,581 of his $12 million salary next year, which the Astros will donate to charitable causes

‘There is no excuse or explanation that makes that type of behavior acceptable,’ he said.

By imposing a penalty Gurriel and the players’ union agreed not to contest, Manfred avoided a possible grievance hearing in the next few days before arbitrator Mark Irvings that would have taken attention away from the World Series.

Gurriel will be put on the restricted list next season, meaning the Astros can replace him and play with a 25-man roster.

Manfred would not compare Gurriel’s actions with the Cleveland Indians’ decision to keep using their Chief Wahoo logo, which has been criticized by Native Americans and others.

‘I see a difference between behavior from one player directed specifically at a player and a logo,’ he said. ‘While both are problematic, I don’t see them as the same issue. We continue to have conversations with the Indians about the logo, and it’s an issue I intend to deal with in the offseason.’

First baseman Yuli Gurriel helped his team get on the board Friday evening after hitting a solo-shot against Los Angeles Dodgers starting pitcher Yu Darvish in the second inning.

But after returning to the dugout, Gurriel appeared to make fun of Darvish’s Japanese heritage by pulling the corners of his eyes back with his fingers. 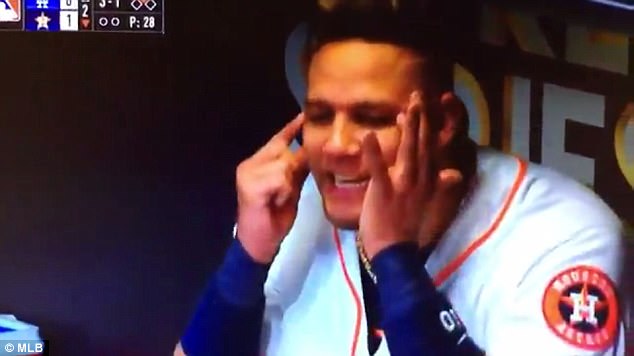 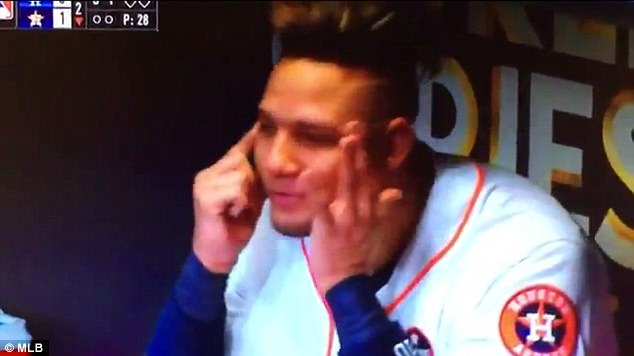 Darvish played six seasons in Japan before making the leap to the big leagues.

Gurriel had also played in Japan in 2014 before joining the Astros.

Social media users reacted with outrage following the facial expression, with some suggesting that Gurriel should be benched for the rest of the series.

‘As someone who hopes the Astros win the World Series: Yuli Gurriel should be suspended for the remainder of the series,’ said one social media user.

Commentators on Twitter also claimed they also read Gurriel’s lips and suggested he could have said the Spanish word ‘Chinito’, which means ‘little Chinese.’

Asked after the game if he was aware of the supposed gesture, Dodgers manager Dave Roberts responded sighted surprised: ‘I did not see it.’

The Astros lead the Dodgers in the series 2-1 after Friday’s game in Houston, ending with a 5 to 3 finish. 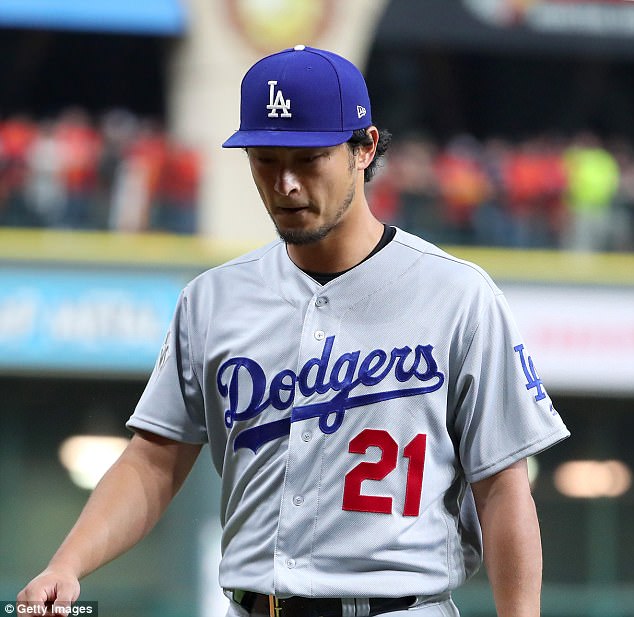 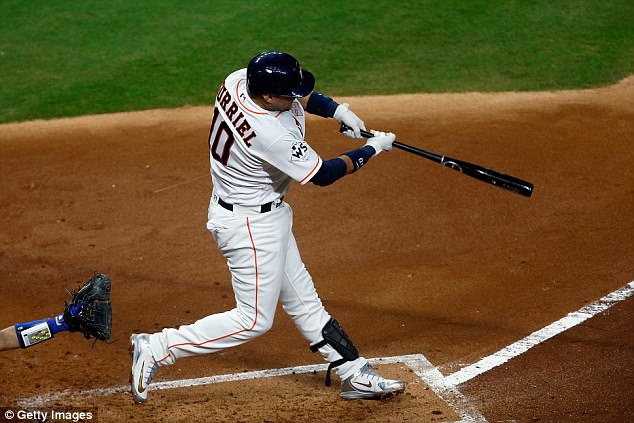