HOUSTON (AP) – Jose Altuve led the Houston Astros to their first World Series title with a win over the Los Angeles Dodgers in November and picked up the franchise’s first MVP trophy in more than two decades a couple of weeks later.

And as his huge 2017 is coming to a close, the diminutive second baseman already is looking for more.

Altuve, who was one of only a handful of players who endured the Astros’ painful rebuilding process en route to this year’s championship, which gave hope to a city ravaged by Hurricane Harvey, was chosen as The Associated Press Male Athlete of the Year.

Results of voting by U.S. editors and news directors was announced Wednesday. The 5-foot-6 dynamo got 715 points, beating out New England quarterback Tom Brady, who had 646, and third-place finisher Cleveland Cavaliers star LeBron James, with 626.

Altuve is a five-time All-Star who led the majors with a career-high .346 batting average and his 204 hits topped the American League. He is the first player in MLB history to lead his league in hits in four straight seasons. He tied a career-best with 24 homers and had 81 RBIs. He was second in the AL by scoring 112 runs, his on-base percentage of .410 ranked third, he was third with 32 steals and his .547 slugging percentage ranked sixth.

His work made him the second Astro to win an MVP award , joining Hall of Famer Jeff Bagwell, who picked up the National League’s honors in 1994.

Altuve carried his stellar regular season into the postseason, where he paced the Astros in their ALDS win over the Boston Red Sox by hitting .533 with an outrageous 1.133 slugging percentage.

Altuve spent his early years with the Astros toiling in relative obscurity as Houston lost 100-plus games in each of his first three major league seasons from 2011-13. There was no denying his superstar status this season as the Astros won 101 games, and he became one of the best stories early in the postseason when he hit three homers in their Game 1 win over Boston.

As one of the smallest players in the majors, Altuve certainly isn’t known as a slugger, but that performance made him just the 10th player in major league history and first since 2012 to hit three homers in a playoff game. Altuve’s story of once being sent home from a tryout because he was too short has been well documented as he has risen to fame. But on the day his huge game led the Astros to that playoff win, he perfectly summed up the mindset he’s carried since that setback.

“As soon as I cross the white line, I feel the same size as everyone else,” he said.

Altuve’s grit and determination is evident every time he takes the field. His teammates marvel at the fact that no matter how good he is, he’s always looking to do better.

“He has four hits and he’s like, ‘Carlos I never had a five-hit game before, let me try to get the fifth hit,'” shortstop Carlos Correa said. “He’s always striving for more. And that’s what I’ve learned from him that makes me better every, single day.”

Altuve, who grew up in Venezuela, considers Houston his second home after spending his entire professional career with the Astros. He took great pride in wearing the Houston Strong patch on his uniform throughout the playoffs as a reminder of what the city went through during the storm and how difficult the rebuilding process would be.

He said people approach him often to say thank you for helping the Astros win their first title and for being a bright spot in such a terrible time.

“We had the responsibility of making it happen for the city,” the 27-year-old said. “We wanted to win the World Series for the city. We just wanted to try to see a smile from them.”

Since winning the World Series, Altuve has been welcomed to Disney World by Mickey Mouse, been a guest on “The Tonight Show Starring Jimmy Fallon” and been named Sports Illustrated Sportsperson of the Year along with Texans star J.J. Watt. Despite all this, Altuve has remained the same humble, soft-spoken man he was when he first broke into the majors in 2011. 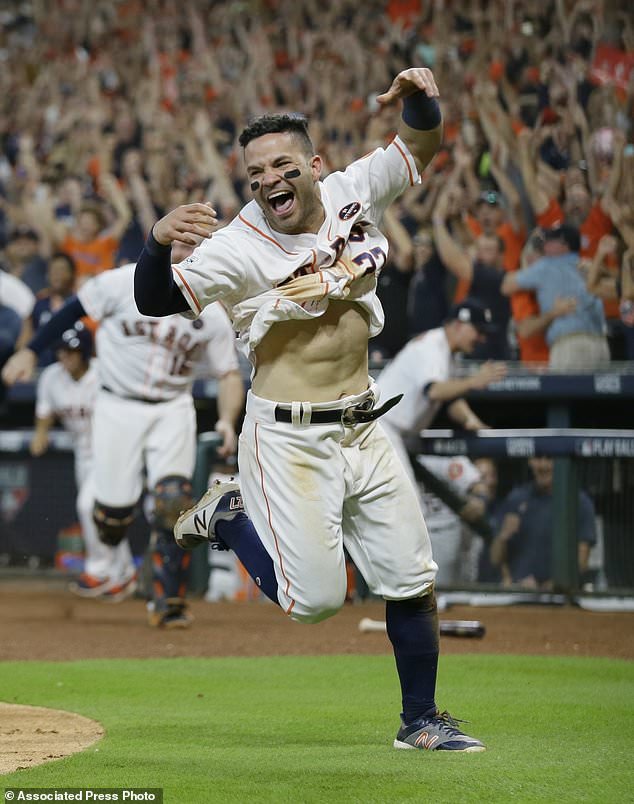 FILE – In this Oct. 14, 2017, file photo, Houston Astros’ Jose Altuve reacts after scoring the game-winning run during the ninth inning of Game 2 of baseball’s American League Championship Series against the New York Yankees, in Houston. Altuve was named The Associated Press Male Athlete of the Year on Wednesday, Dec. 27, 2017. (AP Photo/Tony Gutierrez, File) 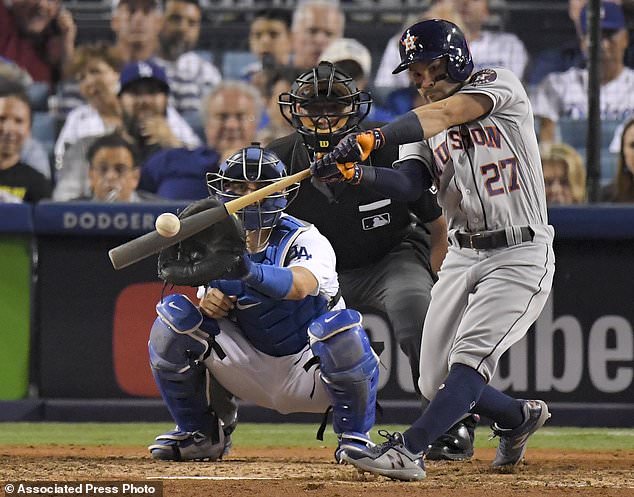 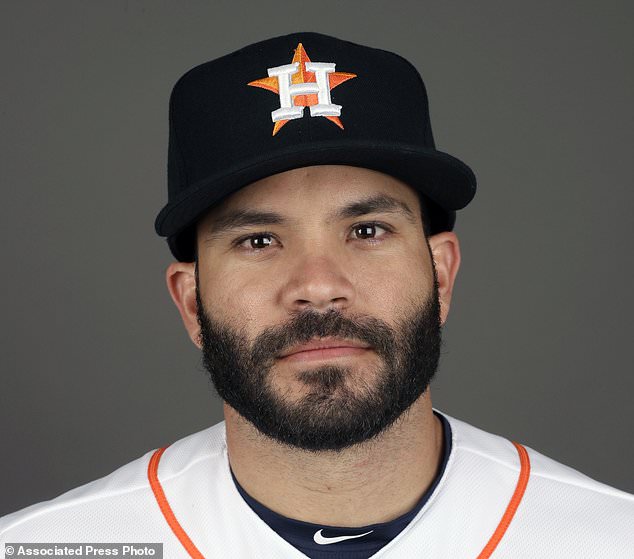