At least 11 people have died during protests in the week since George Floyd was killed, including a retired officer, an ex-college athlete and a restaurant owner.

Protests have rocked American cities in the week since the death of Floyd, a black man who pleaded for air as a white Minneapolis officer jammed a knee into his neck.

The deaths, as well as widespread peaceful protests, have at times been overshadowed by the shocking images of heavy-handed police tactics, vandalism and arson. Dozens have been injured in the chaos.

Many of the people killed were African Americans, compounding the tragedy for black communities. The exact death toll and circumstances of the killings are still being investigated.

One of those killed was retired St. Louis police captain David Dorn. The 77-year-old served 38 years on the force was shot and killed by looters at a pawn shop early Tuesday, authorities said.

Dorn was found dead on the sidewalk in front of the ransacked store. Police have not released details about what led to the shooting, and no one has been arrested.

The shooting apparently was streamed on Facebook Live but has been taken down. 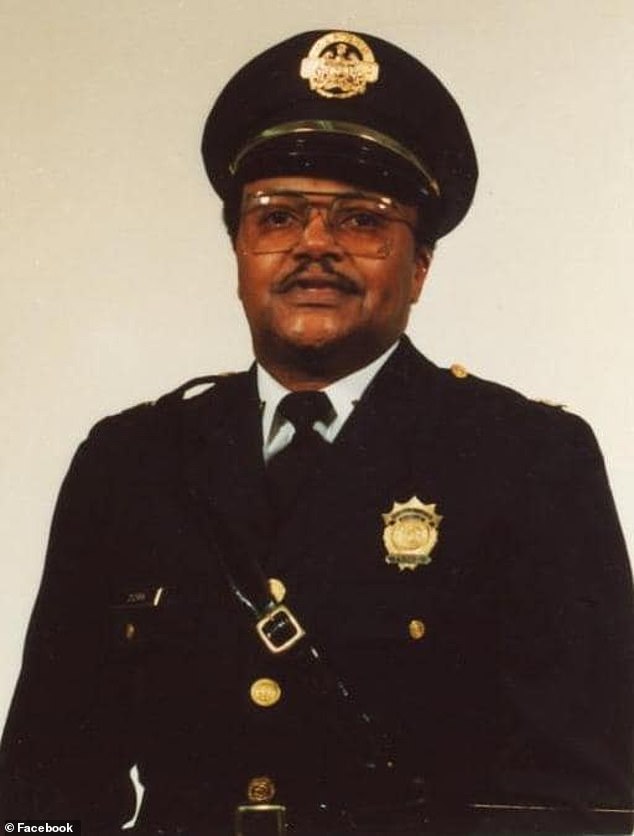 It came on a violent night in St. Louis, which saw four officers shot, businesses burned and ransacked, and people pelting officers with rocks hours following a peaceful protest.

Dorn was a friend of the pawn shop’s owner and frequently checked on the business when alarms went off, wife Ann Marie Dorn told the St. Louis Post-Dispatch.

Dorn retired in October 2007 and then became police chief of Moline Acres, a small town north of St. Louis.

In Louisville police and the National Guard troops trying to clear a crowd Monday heard gunshots and returned fire, killing David McAtee, the owner of a barbecue restaurant.

The mayor fired the police chief after finding out officers did not turn on their body-worn cameras. State police and the U.S. attorney also are investigating.

McAtee was a 53-year-old African American man known for offering free meals to officers who stopped by his restaurant.

‘We lost a wonderful citizen,’ Louisville Mayor Greg Fischer said. ‘David was a friend to many, a well-known barbecue man.’ 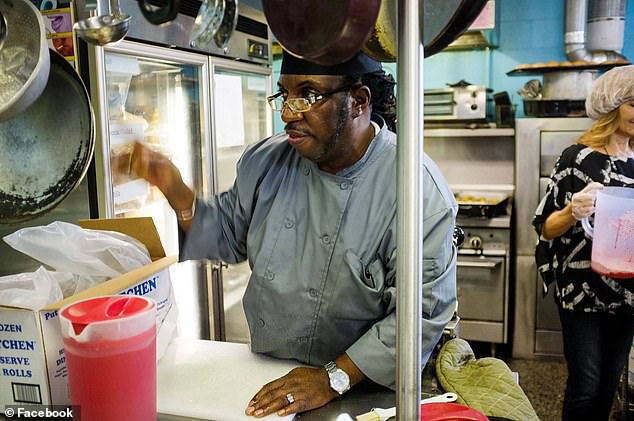 McAtee was shot early Monday amid waves of protests in the Kentucky city since last week. But witnesses said the crowd gather had his eatery had nothing to do with the demonstrations 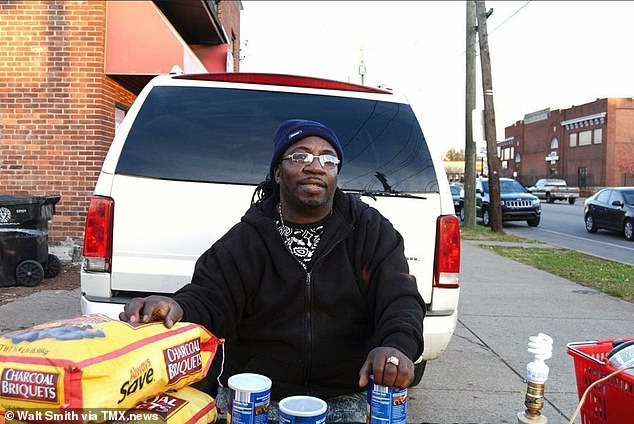 David McAtee (above) was shot dead on Monday morning after Louisville officers and the National Guard ‘returned fire’ into a group gather in a parking lot, next to where McAtee’s business is located

‘This video does not provide all the answers. But we are releasing it to provide transparency. It does not answer every question, including why did he fire and where were police at the time he fired,’ Schroeder said.

The protests also have centered on the death of Breonna Taylor, a black woman killed in her Louisville home in March as narcotics detectives serving a search warrant knocked down her door. No drugs were found.

In Oakland, California a federal officer providing security at a U.S. courthouse during a protest was also killed.

Dave Patrick Underwood, 53, died and another officer was critically wounded when someone fired shots from a vehicle.

It wasn’t immediately clear if the drive-by shooting was related to the protests, though the federal building’s glass doors were smashed and the front entrance was sprayed with anti-police graffiti. No one has been arrested.

Underwood, who was black, and the other officer were contracted security officers employed by the Department of Homeland Security’s Federal Protective Service. They were monitoring a nearby protest.

Underwood was the brother of Angela Underwood Jacobs, recently a Republican candidate to fill a vacant congressional seat north of Los Angeles.

Two more people were killed this past weekend amid unrest in Indianapolis, including 38-year-old Chris Beaty, a former offensive lineman for Indiana University.

Beaty was known as ‘Mr. Indianapolis’ and remained involved with the Hoosiers long after graduation. He also was a prominent businessman, running multiple nightclubs.

‘I am at a loss for words. The news of the passing of Chris Beaty is just devastating,’ coach Tom Allen said in a statement. ‘Since I returned home to coach at Indiana, Chris embraced me, encouraged me and supported me! His passion for life and Indiana Football energized me every time we were together.’ 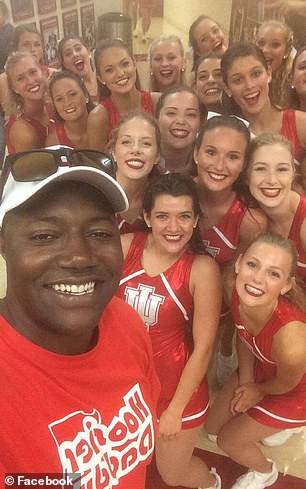 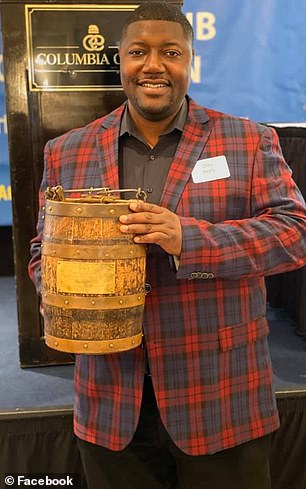 Chris Beaty, who played football at Indiana from 2000-04, was shot and killed during protests in downtown Indianapolis on Saturday night. The Indianapolis native and resident, had remained close to the football program. Beaty is pictured, right, with the ‘Bourbon Barrel’ trophy, which went to the winner of the former annual game between Indiana and Kentucky 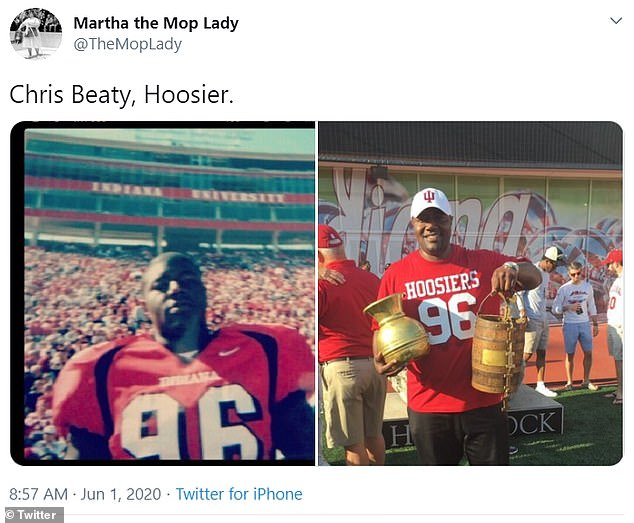 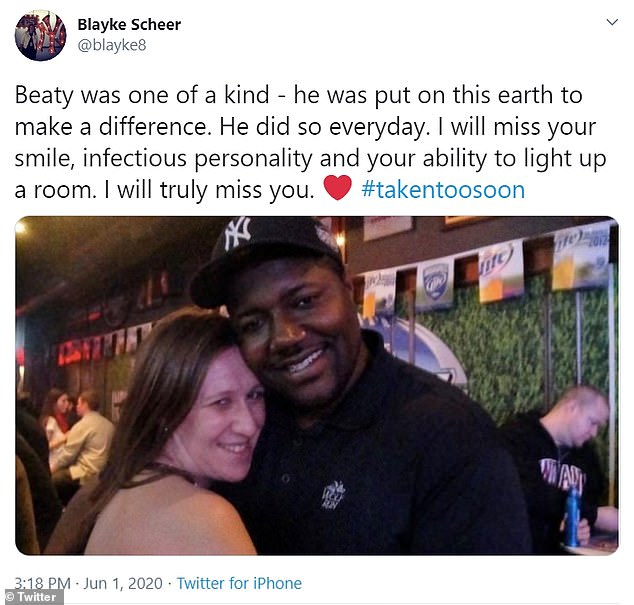 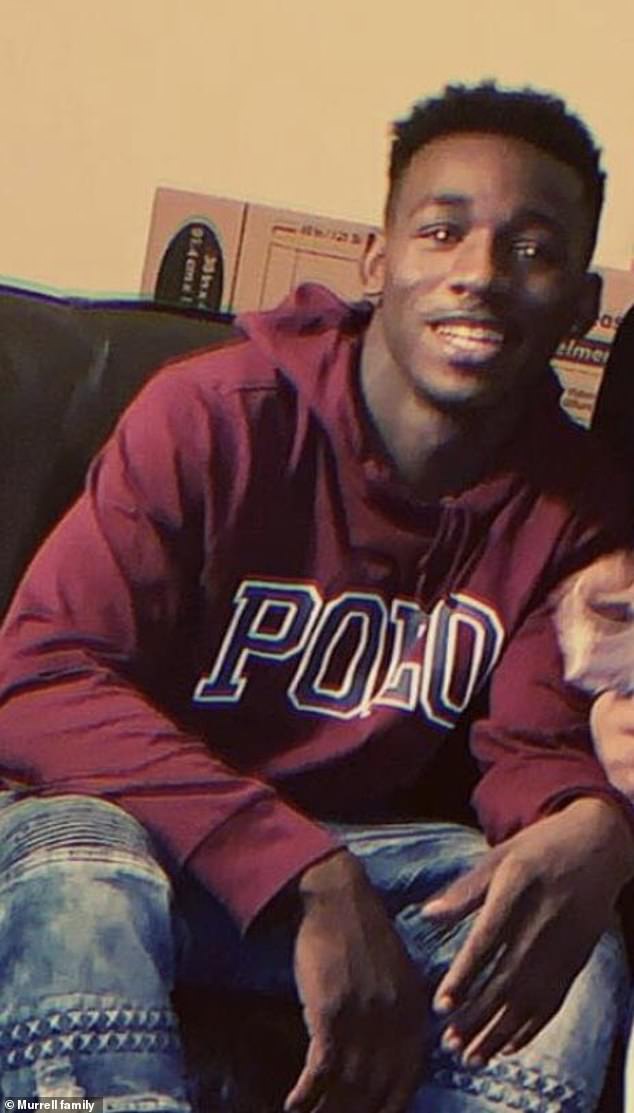 Dorian Murrell, 18, was fatally shot as protests erupted in Indianapolis

The circumstances of Beaty’s shooting weren’t immediately clear, but some media reports said it happened near his apartment.

It came the same night an 18-year-old man named as Dorian Murrell was fatally shot as protests erupted in the city.

Iowa police are investigating the deaths of 22-year-old Italia Kelly, who was shot Monday while leaving a protest outside a Walmart in Davenport.

They are also looking into the death of a man found near where suspects exchanged gunfire with police in the city of 100,000 people across the Mississippi River from Illinois.

Kelly and a friend were getting in a vehicle to leave because a protest had turned unruly when she was struck in the back by a bullet, said her aunt, Amy Hale of Atchison, Kansas. No arrests have been made.

‘She was always smiling, always laughing. That’s why it’s so sad that she was taken in such a violent way,’ Hale said. ‘That is not Italia. She was the bright, bubbly big personality in the room.’ 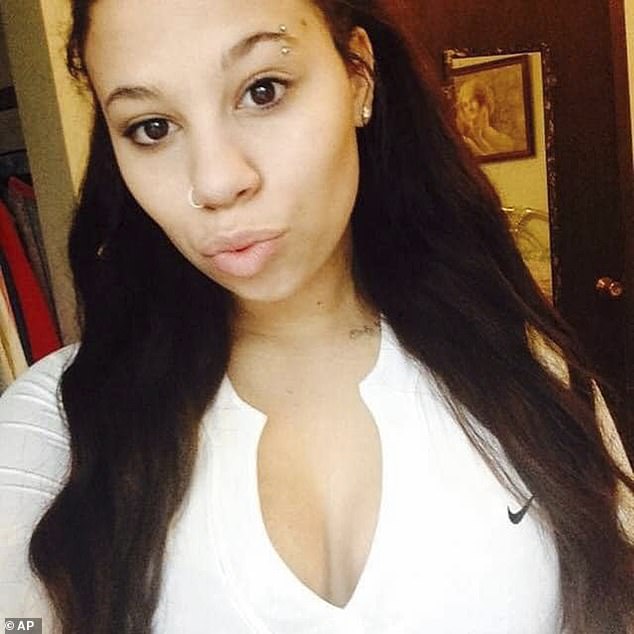 Italia Marie Kelly, 22, was leaving a protest in a Walmart parking lot to protest police brutality when she was struck by a bullet 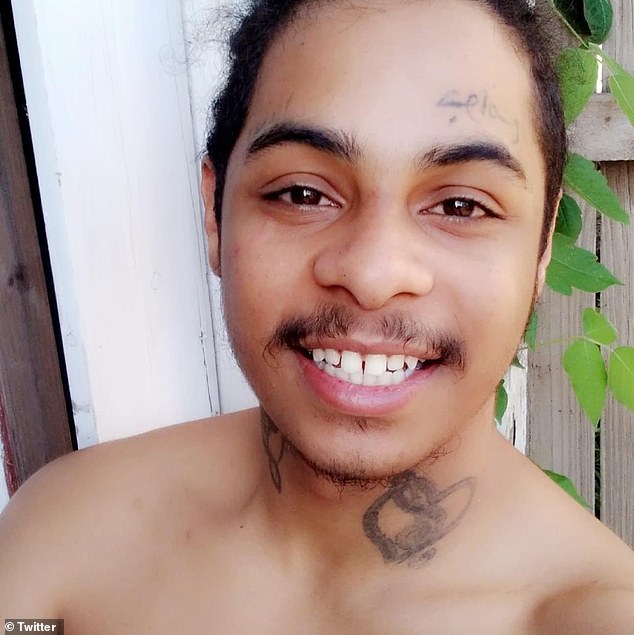 James Scurlock, a 22-year-old black man, was killed Saturday in Omaha, Nebraska after authorities said he tussled with the owner of two downtown bars

Separately, authorities said an officer was ‘ambushed’ with gunfire Sunday. Another officer shot back, and the suspects fled but were arrested.

Near where the officer was wounded, police found a man shot to death and a handgun under his body. His identity wasn’t released.

Police said surveillance video shows that the man and some of the arrested suspects were involved in a shooting outside a jewelry store hours earlier. They were casing the business when other cars arrived and multiple people fired shots at each other, police said.

In what is believed to be the first killing since the protests broke out, Calvin L. Horton Jr. was fatally shot outside a pawn shop in Minneapolis last week.

The owner of the pawn shop, who is white, was arrested in the death of Horton, a 43-year-old black man.

Police say they are investigating the circumstances of the killing, including whether it was related to protests in the neighborhood. The shop was described as having been significantly damaged during the unrest. 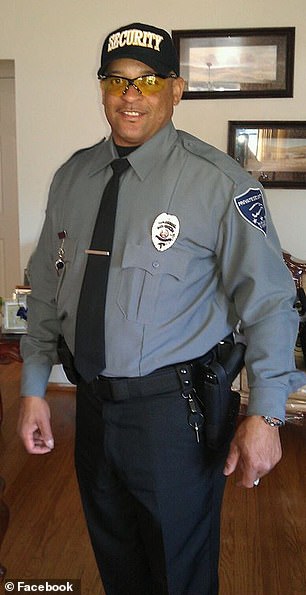 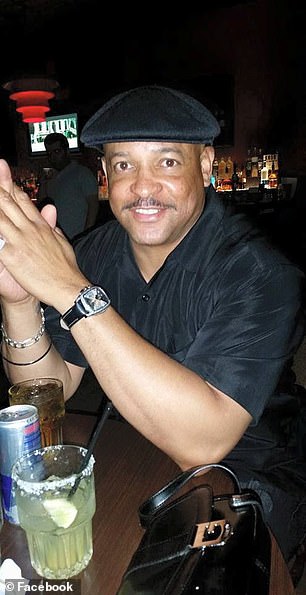 In Oakland, California a federal officer providing security at a U.S. courthouse during a protest was also killed. Dave Patrick Underwood, 53, died and another officer was critically wounded when someone fired shots from a vehicle. 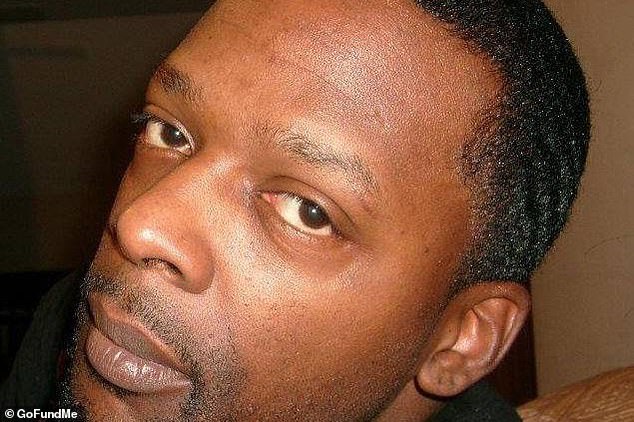 In what is believed to be the first killing since the protests broke out, Calvin L. Horton Jr. was fatally shot outside a pawn shop in Minneapolis last week

James Scurlock, a 22-year-old black man, was killed Saturday in Omaha, Nebraska after authorities said he tussled with the owner of two downtown bars.

Surveillance video of the strip of bars shows a group of people, including Scurlock, approach white bar owner Jake Gardner.

Two people shove Gardner to the ground, and he fired shots in the air. Seconds later, Scurlock is seen jumping on Gardner, who then fires the gun over his shoulder, striking Scurlock.

Authorities have declined to press charges in the death, calling the shooting self-defense. But Gardner could still face misdemeanor gun charges because his concealed carry permit for the gun had expired, the police chief said.

A 21-year-old man was killed in downtown Detroit after someone fired shots into a vehicle during a protest.

According to a police report, the man was sitting in the driver’s seat of a car in a parking lot with two others when someone opened fire and then ran away.

And two more people were killed during unrest Monday in the suburb of Cicero, according to a town official. Spokesman Ray Hanania did not provide details about those who were killed but said it happened during protests.