UPS driver Frank Ordonez, 27, was killed in the shootout between cops and robbery suspects on Thursday night in Miramar, which also took the lives of a bystander and two of the attackers.

Rod Skirvin, president of the Broward County Police Benevolent Association, revealed on Tuesday that of the 18 police officers who discharged their weapons in the course of the gun battle that unfolded during the evening rush hour in Miramar, 13 were from the Miami-Dade Police Department.

The remaining five cops were from Miramar and Pembroke Pines police departments, and the Florida Highway Patrol. 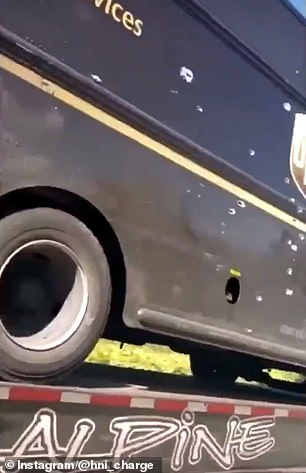 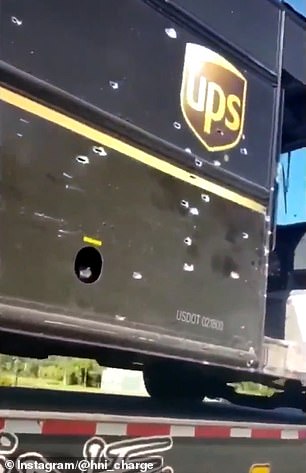 The UPS vehicle is seen in the video riddled with bullets. At least 18 police officers fired shots during a gun battle with robbers who had hijacked the truck

The names of the officers involved in the deadly shootout have not been released, but law enforcement agencies acknowledged that they have been placed on administrative leave, reported Sun-Sentinel. 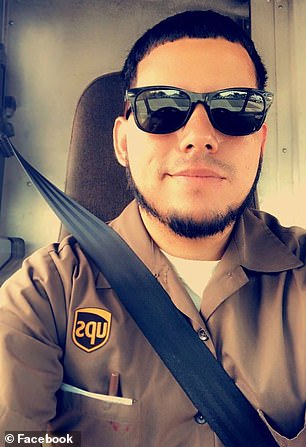 It is still unclear who shot Frank Ordonez, 27, a father of two young daughters

Meanwhile, a cellphone video has emerged online this week showing Ordonez’s bullet-riddled UPS truck being transported on a flatbed truck.

In the brief recording, the vehicle is seen with bullet holes on all sides and bloodstains on the stairs in the driver’s cabin.

It still remains unknown whether Ordonez and the bystander, Richard Cutshaw, were shot by the hijackers or the officers.

‘We don’t know who shot who yet,’ said Steadman Stahl, president of the Miami-Dade Police Benevolent Association, which is representing the 13 Miami-Dade officers involved.

The FBI and the Florida Department of Law Enforcement will have all of the shell casings collected from the scene analyzed to match them to the weapons that were fired.

Ordonez’s stepfather, Joe Merino, has been critical of the police, accusing officers of acting inappropriately during the confrontation with the hijackers who had taken the driver hostage.

Skirvin, the head of the Broward County police union, defended his members, noting that based on the preliminary information, the officers’ actions were justified.

He argued that officers had no choice but to defend themselves after being fired upon and wanted to make sure the robbers did not take another hostage or kill someone on the road. 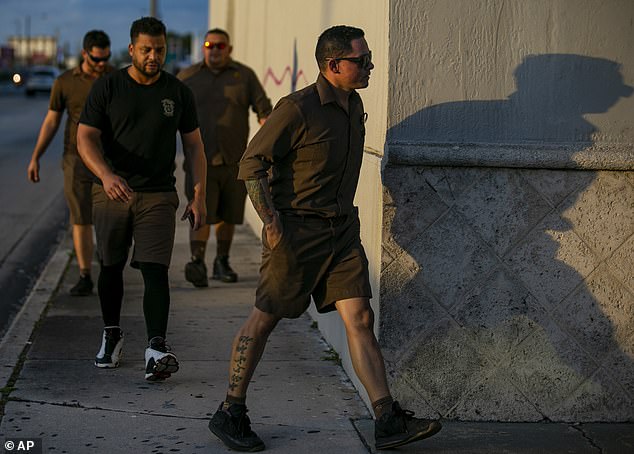 UPS drivers arrived at Vior Funeral Home in Miami, Monday to attend the viewing of Frank Ordonez, the UPS driver who was taken hostage by armed robbers and killed during a shootout

On Sunday night at a UPS Customer Center, relatives and friends of Ordonez gathered for a vigil, lit candles and wrote messages on UPS slips they stuck to a car.

UPS workers abroad have also joined in to express support- one group from London tweeted a photo showing uniformed workers holding up letters that together spelled #ONE UPS and RIP Frank Ordonez.

More than a dozen officers from four agencies had converged last Thursday on the UPS truck at a busy South Florida intersection during rush hour, taking cover behind the vehicles of people stopped at a red light amid bursts of gunfire.

The 27-year-old UPS driver and another motorist stopped at the light, Richard Cutshaw, 70, were killed along with the suspects.

The shooting is being investigated by the state agency in part because it involved four police agencies and more than a dozen officers.

The 23-mile high-speed chase began after a jewelry store robbery in Coral Gables, where a woman was struck in the head by a ricocheting bullet.

The truck got off the interstate and drove into Miramar before getting stuck at a busy intersection.

Records show that both men have extensive felony criminal records, and that Alexander had just been released from prison on an armed robbery conviction.

Both were killed in the shootout.

Ordonez was on his first day of work as a UPS driver when the fatal carnage unfolded, and his brother told CNN that he was covering the route of a driver who had called out sick that day, a common first assignment for rookie UPS drivers.

When the armed criminals became stuck in traffic in Broward County and again opened fire on police, 18 officers from multiple agencies returned fire, shooting some 200 times at the stolen truck.

The chase and final shootout were broadcast live on television, including the moment when one of the men tumbled out of the truck, mortally wounded.

‘My brother frank ordonez was killed by police officers on 12/5/2019, when two robbers hijacked the USP truck he was driving,’ Roy Ordonez posted on a GoFundMe page that raised more than 10 times the $20,000 goal.

‘They kidnapped my brother and took him on a high speed chase, when they came to a stop he was gun down like a criminal by the Florida police.

‘He didn’t deserve to die the way he did, he was just going to work to provide for his two little girls, which he loved so much. which are now left without a father… frank leaves behind two daughters with the ages of 3 and 6.’ 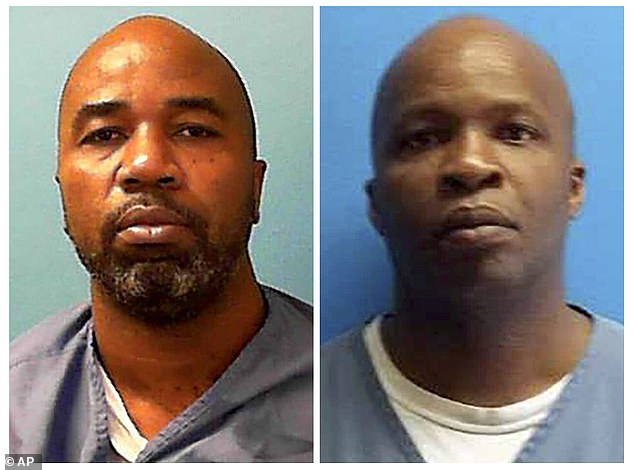 There was an open casket to pay respects to the 27-year-old driver killed in a shootout between Florida police and robbery suspects who hijacked his truck. Ronnie Hill, left, and Lamar Alexander, right, are pictured

The family asks for help raising money for a lawyer, to cover the funeral cost and to help his little daughters school costs.

‘His oldest daughter Hailey sees a speech therapist which UPS payed a potion of,’ the brother said, adding: ‘PLEASE SHARE AND MAKE PEOPLE AWARE OF TRIGGER HAPPY POLICE OFFICERS. they could have killed many more people, could have been one of your loved ones. please don’t let my brothers death be for nothing. police need to be held accountable.’

The Florida Department of Law Enforcement appealed Monday for anyone who witnessed or has video of the shootout between police and the hijackers of a UPS truck to contact the agency.