A least 26 million Americans are expected to be affected by a new wave of severe storms hitting the US this weekend, with flash flooding in areas throughout the Heartland.

As storms moved through eastern Missouri, to Southern Illinois and Indiana on Sunday, an additional 2-3 inches of rainfall was expected to hit Kentucky, which alongside the other states was at risk of flash flooding after already taking a hefty hit on Friday.

But a fresh warning came as a line of storms moved southeast through Kentucky and Tennessee, making its way into Virginia and the Carolinas.

The southeast has endured some gusty winds this weekend, with a reported tornado in Alabama making up some of 100 reports of severe weather.

Iowa and southern Minnesota were most at risk of seeing tornadoes. Large hail and torrential downpours, combined with damaging wind gusts were expected in Minnesota and Nebraska on Sunday with the StormMax at 70mph.

As well as damaging winds across the southern Appalachians, the northern high plains and upper Midwest was at risk of severe storms too.

Ahead of a frontal system affecting the Upper Mississippi Valley and portions of the Lower Ohio Valley, storms were predicted to develop in New England on Sunday afternoon, with Boston, Hartford, New York City, Des Moines and Charlotte named some of the major cities where the weather system could strike. 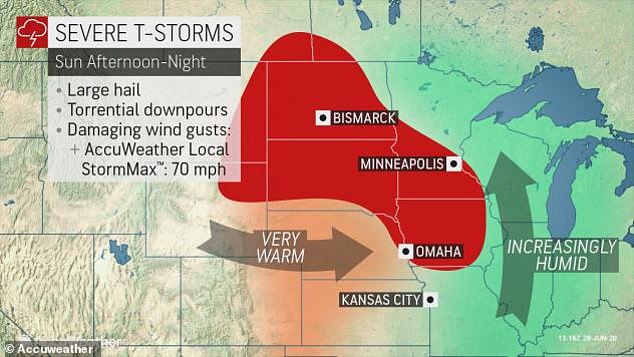 Large hail and torrential downpours, combined with damaging wind gusts were expected in Minnesota and Nebraska on Sunday with the StormMax at 70mph 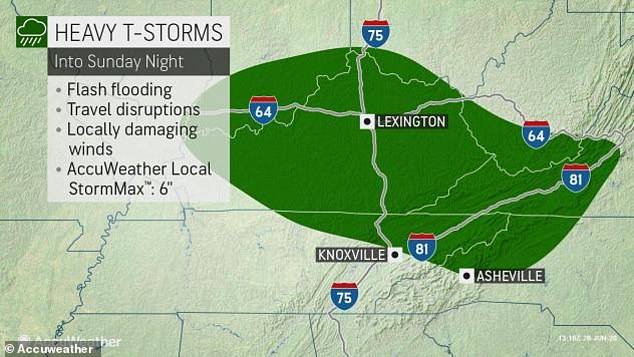 Heavy storms were set to cause travel disruptions on Sunday night as a line of storms moved southeast through Kentucky and Tennessee, making its way into Virginia and the Carolinas 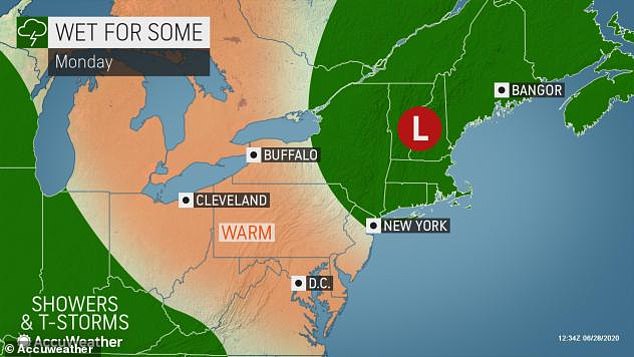 Monday morning, more of the East Coast was set to see showers and thunderstorms 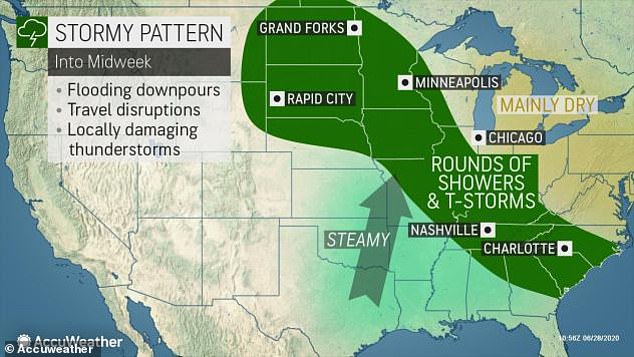 Severe thunderstorms are set for the North East going into Tuesday and Wednesday and outdoor plans will be disrupted, an Accuweather forecast shows.

Meanwhile a cold front is expected to bring winds to the west, posing a risk of fire growth and spread from Colorado to California.

Salt Lake City, Utah saw a fire break out overnight on Saturday. On Sunday fire danger was expected for the Central Great Basin and Southwest.

Meanwhile the biggest Saharan dust storm in 50 years was still ongoing and affecting Florida, Texas and other states already struggling with COVID-19 and respiratory problems.

The so-called ‘Gorilla Dust Cloud’ struck Mississippi’s gulf coast Thursday after charting its path across the Caribbean this week where air quality plunged to ‘hazardous’ levels.

The 3,500-mile-long cloud traveled 5,000 miles from North Africa before reaching the region stretching from Florida west into Texas and north into North Carolina through Arkansas, the National Weather Service (NWS) said.