Migrants from Central America are paying smugglers $1.7 billion a year in the hope of escaping poverty or the chance of a better job in the United States, according to a major study of migration published on Tuesday.

The project by the Migration Policy Institute, World Food Programme and the Civic Data Design Lab at the Massachusetts Institute of Technology found that migrants were paying $2.2 billion in total.

And 92 percent of people surveyed cited economic factors as the main driving force for wanting to leave home – rather than climate disasters, violence or food insecurity.

The report is the latest contribution to the debate about how the U.S. should manage immigration.

The Biden administration is under intense pressure to do more. Last month, Customs and Border Protection revealed that detentions at the border had hit their highest level in 20 years.

The report found that 55 percent of the most recent migrants contracted smugglers to help them, paying out $1.7 billion a year – the biggest chunk of a total of $2.2 billion spent by people trying to find better lives.

‘That is an extreme amount of money,’ said Sarah Williams, an associate professor of technology at MIT’s Department of Urban Studies and Planning, and one of the report’s authors.

‘That $2.2 billion is all paid for by the migrants themselves, so the risks, both in terms of debt and personal risk, is borne by the migrant.’

Economics are the most important factor in prompting people to leave El Salvador, Guatemala and El Salvador, according to the report, based on nearly 5,000 migrant-sending households and an online survey of 6,000 people 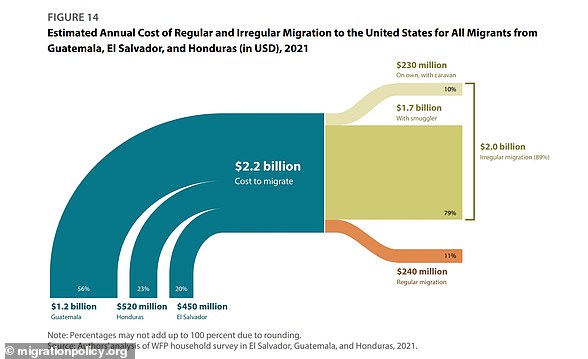 A new report by the Migration Policy Institute, World Food Programme and the Civic Data Design Lab at the Massachusetts Institute of Technology reveals that Central American migrants pay about $1.7 billion every year to smugglers in search of a better life

The report – based in interviews with nearly 5,000 migrant-sending households and an online survey of 6,000 more across El Salvador, Guatemala and Honduras – found that migrants using regular channels spent an average of $4500.

Those traveling by themselves or with a caravan spent $2900.

But using a smuggler raised the cost to about $7500.

Even so, the data show a surge in interest in migrating. During the past two years the number of people who said there were considering migrating increased more than five-fold, from eight percent in 2019, to 43 percent this year.

However, only three percent said they were making concrete plans to leave.

Their main reasons were economic, such as lack of money for necessities, need for a better job or working conditions.

The pandemic has also exacerbated the push factors. The report cited a United Nations World Food Programme study that said households across all three countries had suffered income losses.

Climate and environment, violence and family reunification were

‘The core issue is economics, at the end of the day, and this is where policymakers need to be focusing their energy,’ said Williams.

‘At the heart of what’s causing migration is that people don’t have enough money to provide for their basic needs.’

The surge in migrants arriving at the southern border has piled pressure on President Biden and his administration.

Data published by Customs and Border Protection last month revealed that 1.7 million migrants were arrested at the border in the 2021 fiscal year.

That surpasses the previous record set in 2000 when the agency recorded 1.64 million arrests.

Biden has put Vice President Kamala Harris in charge of working with Central American nations to stem the flow, while administration critics have homed in on border security as the key.

The Western States Sheriffs’ Association, representing 17 states, is demanding the removal of Department of Homeland Security Secretary Alejandro Mayorkas over his handling of the border crisis.

It issued a declaration of ‘no confidence’ in Mayorkas, warning of a ‘complete and total breakdown’ in efforts to stop illegal crossings.

‘America’s sheriffs have watched in disbelief as the southern border has turned into an invisible line in the sand,’ the association says in a letter signed by its president, Sheriff Leo Dutton of Lewis and Clark County, Montana, and retired Sheriff James Pond, its executive director.

‘Border patrol agents have been relegated to daycare supervisors at housing units and when they do attempt to act, they are scrutinized, placed on administrative leave, and investigated for political gain.’

While highlighting the push factors of migration from Central America, the report is designed to offer governments a blueprint to address the root causes, including initiatives that are linked to economic recovery, livelihoods and food security for people who are most likely to migrate irregularly.

‘Given the repeated cyclical patterns of rising Central American migration northward, it is clearly time for a strategy that moves beyond unilateral enforcement actions to recognize not only the drivers of migration but also the nuanced contexts in El Salvador, Guatemala and Honduras that smart investment and community strengthening policies should address,’ said MPI President Andrew Selee.