At least 7 children are sick in suspected California cancer cluster

At least seven children in a single California town of less than 16,000 people have been diagnosed with cancer – and their families suspect toxic chemicals from a Nestle factory may be to blame.

Five of those children attend and live near Elementary School – three employees of which were also treated for cancer last year – located near a now-deactivated cell tower and a former Nestle plant suspected of leaking carcinogenic TCE.

Cancer clusters like the one in Ripon are compelling, but proving that environmental toxins are driving improbably high rates of the disease is a steep challenge for scientists and attorneys.

The families first banded together to get the cell tower shut off and have now redoubled their efforts to urge the city to investigate the area’s groundwater, CBS reported.

At least seven children, including these two boys (to left, Kyle Prime), in Ripon, California have been diagnosed with cancer. The children’s parents now suspect that a carcinogen in the city’s drinking water may be responsible for their children’s illnesses

‘My gut tells me that something is here that’s causing issues,’ Kellie Prime, whose son Kyle is one of the seven sick children, told CBS.

Kyle was diagnosed with kidney cancer in 2016 when he was just nine.

He’s now in remission, but his cancer gave Kyle and his mother the scare of their lives, a memory that haunts and motivates Kellie.

‘I’ve looked into his eyes and I’ve looked at the fear that he has as a nine-year-old facing something, asking me, “Mom am I going to die,”‘ she recalled in a April interview. 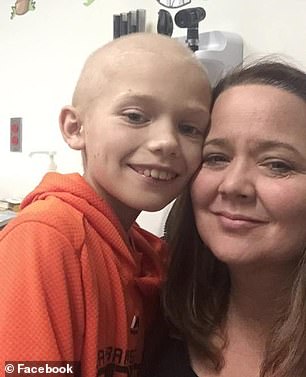 Kyle Prime (left) is now in remission from kidney cancer, but the fight has been harrowing for him and his mother, who now is fighting to investigate levels of a carcinogen in the city’s water

She and the other parents first set their sights on a cellphone tower on he campus of Weston Elementary, where Kyle and four other sick children were going to school.

There were just 419 students enrolled at Weston Elementary during the 2018-2019 school year.

So, the rate of pediatric cancers at that single school is nearly 62-times higher than the national rate of 19.3 out of every 100,000 children under 19 and under.

If the national rate were isolated to elementary school-age children, the difference would be many times greater.

First the family thought that there children might have been exposed to high doses of radiation from an on-campus Spring cell tower.

But US agencies have dismissed the risk as minimal, and the World Health Organization classifies it as only a possible risk.

The Sprint tower was operating well within federal limits on radiation potency, according to CBS, but ultimately agreed to the parents’ plea to shut down the tower.

The families first got Sprint a cell tower on the campus of Weston Elementary, where five children and three staff members have been diagnosed with cancer

Just a mile-and-a-half from Weston is the former cite of a Nestle plant where the company produced decaffeinated coffee through the 1970s.

A chemical called trichloroethylene (TCE) to make the product.

Unlike RF, TCE is a known carcinogen.

Although the factory closed in 1994, a 2002 court case held Nestle responsible for polluting Ripon’s groundwater well, and ordered the company to pay $1 million to the city.

Last year, tests of the city’s drinking found that TCE levels had crept up to 90 percent of the federal limit for the chemical. 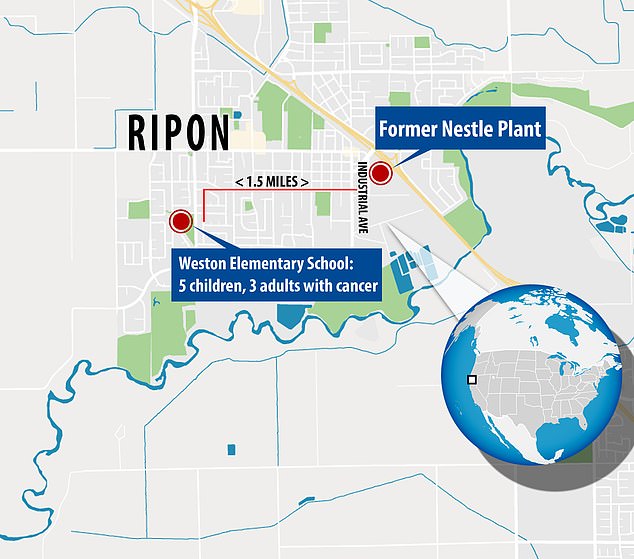 A former Nestle plant that Ripon families suspect has leaked the carcinogenic chemical TCE into the area’s drinking water is just 1.5 miles from Weston Elementary

The contaminated well was turned off, Nestle claimed it had made ongoing cleanup efforts for 30 years and the city insisted four months later that the drinking water was safe.

Kellie and the other parents are not so sure.

Attorneys at the Cochran Firm, which has a history of winning cases and settlements against companies for polluting water, are not looking into the case, the Modesto Bee reported.

The city of Ripon told the Modesto Bee that it is performing further tests one of its wells for contamination, and the area water authority has requested that Nestle test further for vapor residue of TCE in the soil.

Kellie Prime and the other families of pediatric cancer patients in Ripon say they plan to keep going until every stone has been overturned in their search for a carcinogen.

‘I won’t stop until it’s done, until that thing’ – whatever it may be that explains the cancers that have struck her son and others – ‘is gone,’ Kellie told CBS.