At least ten homes have been destroyed after a raging bushfire with flames up to 70-metres high bore down on bushland north-west of Sydney.

The Gospers Mountain fire was at ‘watch and act’ level early Monday after firefighters worked overnight to contain the blaze around Mt Wilson, Mt Tomah and Berambing.

‘Fire activity has reduced and there is currently no immediate threat,’ the NSW Rural Fire Service said.

‘Firefighters are actively patrolling the fireground.’

The fire ground stretches from the Lithgow area in the west, through the Hawkesbury area and towards the Central Coast in the east.

But authorities have warned there’s a risk that embers from the fire could fall in the Bilpin area, starting new blazes ahead of the main fire front.

So far the fire had burned through almost 380,000 hectares.

On Sunday, an emergency warning was issued for Gospers Mountain and there were reports some properties had been lost in the Mt Tomah and Mt Wilson areas.

A home at Mount Wilson was lost and several sheds and buildings at Mount Tomah were destroyed, The Daily Telegraph reported on Monday.

The Bureau of Meteorology has forecast severe heatwave conditions will hit most of NSW by the end of the coming week.

Places such as Cobar, Broken Hill and Griffith will see temperatures above 40C in the coming week, the bureau has said.

With 110 fires burning in NSW the RFS is quite concerned about conditions from Wednesday onwards.

‘There’s going to be a lot of work going on over the next 24 hours to try and just see what we can do to protect as many properties as we can, but people should be under no illusions,’ RFS deputy commissioner Rob Rogers said on Sunday night. 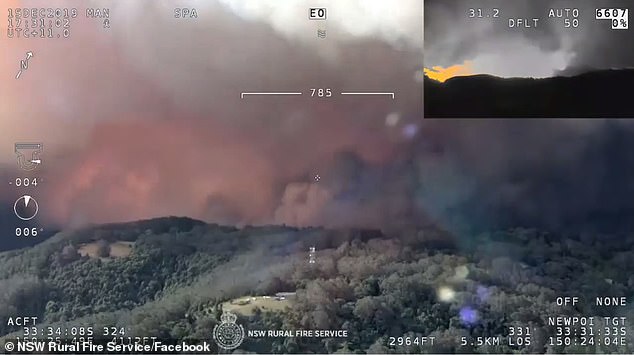 In a statement on Sunday evening, the NSW Rural Fire Service said the Gospers Mountain fire was impacting Mount Wilson, Mount Irvine, Mount Tomah and Berambing. ‘It is too late to leave. Seek shelter as the fire approaches. Protect yourself from the heat of the fire,’ the emergency warning said

‘We’re going to have to get through this next week of really hot weather with these fires being very active.’

Total fire bans are in place for Monday for the Central Ranges, North Western, Northern Slopes and New England areas where the fire danger rating has been set at ‘severe’.

Some 724 homes, 49 facilities and 1582 outbuildings had been destroyed so far this fire season. Six people have died and 2.7 million hectares have been scorched.

Residents were warned it was ‘too late to leave’ as fires encroached on the Blue Mountains on Sunday.

At least two homes were reportedly destroyed by 11.30pm, as the blaze scaled above the trees and sent plumes of smoke through the sky.

Footage shared by the Terrey Hills Brigade and captured by Captain Peter Duff showed the out-of-control flames at Mt Tomah. 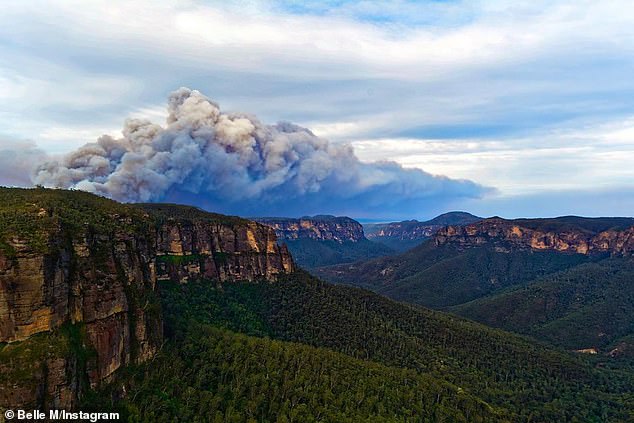 An emergency warning was issued on Sunday afternoon for the Gospers Mountain blaze, which is more than 378,000 hectares in size and ravaging the Blue Mountains

Behind the camera, a firefighter can be heard saying there were ‘spot fires galore down here’ which were stretching between 60 to 70 metres high.

‘Please keep in mind that this is fire weather behaviour in fairly mild conditions but the actual fire doesn’t seem to care. This week is going to get hot,’ Terrey Hills Brigade said with the video.

Pictures taken at the panoramic Evans and Govetts Leap lookouts showed clouds of smoke engulf the sky above the Blue Mountains greenery.

‘It is too late to leave. Seek shelter as the fire approaches. Protect yourself from the heat of the fire,’ the emergency warning said.

There were more than 2,000 personnel working on the 108 bush and grass fires burning across NSW at 11.30pm and 57 blazes yet to be contained.

RFS deputy commissioner Rob Rogers said there were reports of properties being impacted and some being alight.

‘Firefighters are trying to protect as many properties as they can but people in that area would see that that fire’s behaviour is really tough, it’s going to be a long afternoon and a long evening for people in that area,’ Mr Rogers told ABC TV on Sunday night.

‘We’re doing everything we can to protect people, but people obviously need to avoid the area.’

‘There’s going to be a lot of work going on over the next 24 hours to try and just see what we can do to protect as many properties as we can, but people should be under no illusions – we’re not going to get this fire put out – and we’re going to have to get through this next week of really hot weather with these fires being very active,’ he told the ABC.