The thieves who crept into an East London warehouse in the dead of night earlier this month knew what they were after.

CCTV footage later showed that they headed straight for one box in particular. It contained not jewels or cash, not even drugs. Their swag of choice was – of all things – a spice.

The container they stole held £50,000 of saffron, a commodity whose remarkable flavour and lustrous golden colour adds distinction to a range of traditional Mediterranean dishes, most famously paella.

But it doesn’t come cheap. The tiny, highly aromatic filaments (dried stigma, also known as threads) from a special type of crocus are so highly prized that they fetch up to £11,000 per kilogram.

CCTV footage shows thieves, who broke into an East London warehouse earlier this month, stealing a container holding £50,000 of saffron

How on earth, you may well ask, can so much value be placed on a mere flavouring? After all, diamonds are forever, but saffron is always destined for the cooking pot.

Do not, however, utter such an irreverence in the hearing of the people of La Mancha, the part of Spain that produces the world’s most revered saffron. For them, it represents hard cash.

In the region’s ancient farmhouses, families still treasure their antique ‘guarder azafran’, the saffron ‘safe’ in which the spice was hoarded to be sold at a time of need. To pay for a wedding, perhaps, or a new tractor.

When I visited La Mancha to see the harvest in 2010, Spain was still suffering the after-effects of the global financial crash two years earlier.

The property boom preceding 2008 had come to a grinding halt, and the local radio station was reporting that the region’s landowners were using any available patch of land to plant Crocus sativus – the species that produces the most valuable saffron – rather than wasting any more time constructing holiday homes that no one wanted to buy.

The crop blooms in late autumn and that is when, each morning, the farmer collects the flowers after the dew has evaporated but before the crocuses begin to wilt.

They are always handpicked, the workers using a finger nail to sever the stems. The flower-heads are then taken inside and the three brilliant red stigma inside are removed, again by hand.

Placed on a rack, these are then toasted quickly at a high temperature – about 70c – for six minutes. Fast toasting results in the highest quality saffron, creating the strongest aroma and preserving the bright colour. 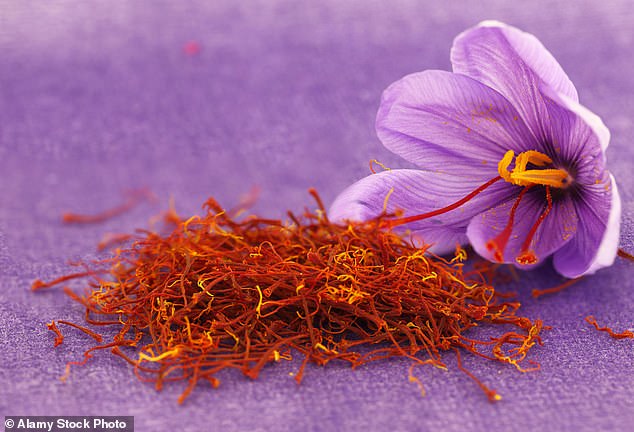 Saffron’s tiny, highly aromatic filaments (dried stigma, also known as threads), from a special type of crocus (above), are so highly prized that they fetch up to £11,000 per kilogram

It takes 150 flowers to produce one gram of dried saffron, which means the 10kg that went missing from the East London warehouse – worth £50,000 wholesale and, yes, £110,000 retail – would have required a staggering 1.5 million crocuses.

You could be forgiven for wondering whether anything can be so gastronomically amazing as to justify such a lengthy fuss.

As a fan, I’d cite saffron’s three exceptional, powerful properties: aroma, flavour and colour. The intoxicating scent of saffron – slightly soapy and floral, with undertones of rose and burning hay – comes from safranal, an oil that develops when the stigma are toasted.

The delicious flavour, meanwhile, comes from a compound called picrocrocin, best described as bitter and smoky, and the vivid colour comes from a potent carotenoid pigment called crocin.

How to cook up a storm with saffron

Rose learned to make this on her visit to La Mancha and it is now a Prince family favourite.

Add the sweet pepper, the onion, garlic and nora pepper with 25ml of the saffron infusion and the rice. Cook for a minute or two, stirring, then cover with the meat stock so it is 1cm deeper than the level of the rice.

Bring to the boil; turn down to a simmer and cook for about 10 minutes.

Meanwhile, blanch the broccoli in boiling water for one minute then drain and cut into smaller pieces.

Chop the rocket, courgette and mangetout into 1cm pieces.

Put all the green vegetables on top of the rice – they will add humidity to it – and put it in the oven for a further 10 minutes. There is no need to cover it, it will cook evenly.

Bring to the table, serve heaped onto plates with a wedge of lemon.

It all adds up to an ingredient that brings an explosion of taste to any dish it is used in.

The nutritional benefits of saffron are highly debatable given that only minuscule amounts are used.

Historically, it was believed to have magical powers, but modern studies show that one of its few health benefits may be as a mild reliever of depression. But don’t overdo it: eaten in larger quantities it is toxic.

Spain’s La Mancha may stake claim to the world’s best saffron, but the spice originated in Western Asia, before being taken to the Middle East and on to Mediterranean Europe by the seafaring and enterprising Phoenicians who dominated trading culture from 1550BC to 300BC.

It derives its name from the Arabic za’faran, meaning ‘yellow’. These days, the main producers are Iran, Spain, Greece, Morocco and Italy, though it is also grown in New Zealand and Kashmir.

Strangely enough, medieval England once boasted an extremely lucrative saffron industry. The spice arrived in Cornwall (where it is still used in saffron buns) in the 14th century and 200 years later it was being successfully grown and traded in the area around the Essex town of Chipping Walden, which changed its name to Saffron Walden in honour of its exotic new crop.

By 1800, saffron cultivation had come to an end because it was too expensive to produce. But in 2000, the crop was reintroduced by an enterprising geophysicist called David Smale and is now sold under the name English Saffron.

When it comes to cooking with saffron, every country has its classic recipes. Aside from rice dishes in Spain, it is ground and rubbed onto chicken with lemon.

In Italy it is used in risotto alla Milanese and Sicilian pasta con sarde (with sardines).

The Iranians use it in delicious fried pastries, called jalebis, while in India, they make malpura (creamy pancakes in syrup).

In this country, meanwhile, you may come across it in little fruit cakes called Norfolk Dingers in East Anglia.

Feel like investing? It only makes sense to buy the purest quality – the better it is, the less is needed.

There are various grades or marks to look for on labels: Mancha Coupe (the highest Spanish grade and most expensive) and Sargol, the best saffron grade from Iran.

For the best La Mancha grade saffron expect to pay approximately £11 per gram. For good Iranian saffron, £7 per gram. If you think that sounds a little steep, bear in mind one gram, made in to an infusion, flavours about 20 helpings.

Look closely at non-graded saffron to be sure that unscrupulous producers have not cut the spice with the flavourless male stamens. You’ll always know if you have been duped – when the saffron is added to water, it should colour it slowly over an hour. If the water quickly turns yellow, it probably contains artificial dye.

And, whatever you do, keep it well out of sight of any potential burglars!