Atlanta bride-to-be shuts down trainer who body shamed her

A bride-to-be has shut down a personal trainer after he pressured her to pay for his services, body shaming her in the process, while insisting that she needed to workout with him in order to look her ‘best’ for her wedding day.

The unnamed personal trainer approached Atlanta radio host Cassie Young after she posted the news of her engagement on social media, asking her to hire him to get her in shape for the big day at a cost of $75 an hour.

When Cassie politely declined his offer, telling him that she thinks she is in shape and is happy with her appearance, the trainer went off on a long tirade about her looks in order to convince her she needed his services, commenting on everything from her eating habits to his theories on how the ‘big body acceptance people’ really feel.

Confident: Atlanta radio host Cassie Young scolded a personal trainer after he wouldn’t take no for an answer when he declined his offer to help her ‘look her best’ on her wedding day 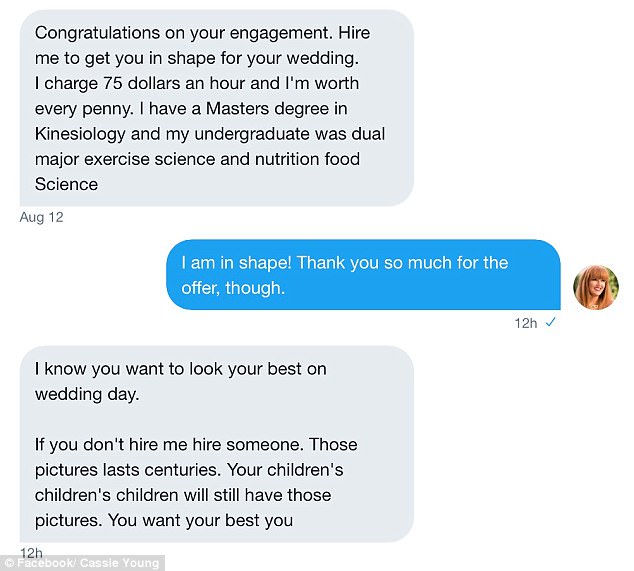 Persistent: The unnamed personal trainer approached Cassie on social media after she shared news of her engagement online, and wouldn’t take no for an answer 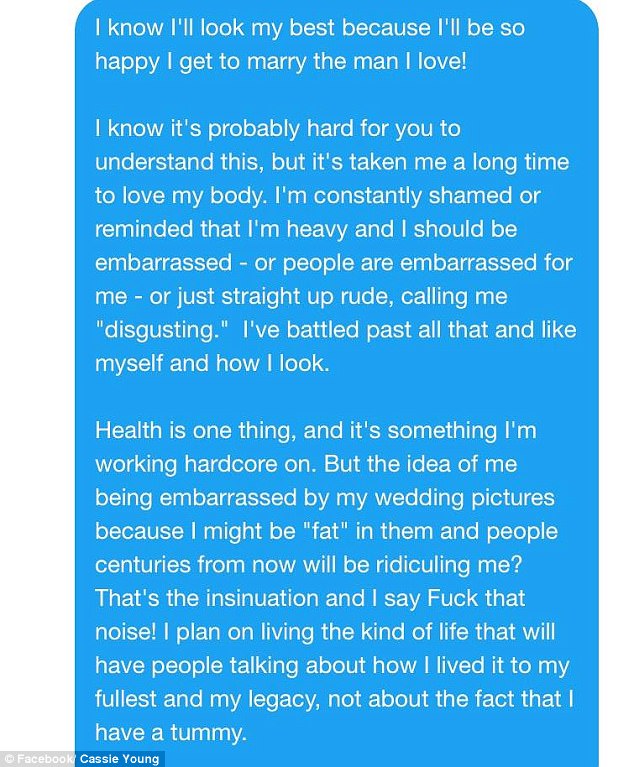 Skinny doesn’t mean healthy: Cassie hit back at the trainer, saying that she has taken the time needed to learn to love her body, despite other people saying she is ‘disgusting’

Cassie then told him that she will already look her best because she’ll be ‘so happy’ to marry the man she loves.

‘I know it’s probably hard for you to understand this, but it’s taken me a long time to love my body,’ she said. ‘I’m constantly shamed or reminded that I’m heavy and I should be embarrassed—or people are embarrassed for me — or just straight up rude, calling me ‘disgusting.

‘I’ve battled past all that and like myself and how I look.’

But the trainer, who Cassie doesn’t identify, just wouldn’t let it go. 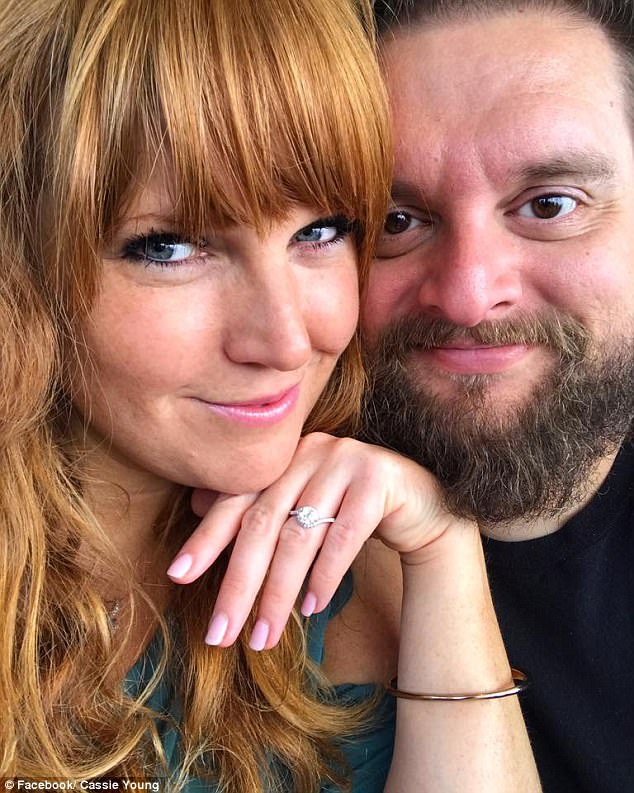 Real love! Cassie told the personal trainer that she would look her best on her wedding day not because of how she looked, but because she’s marrying the man she loves (pictured) 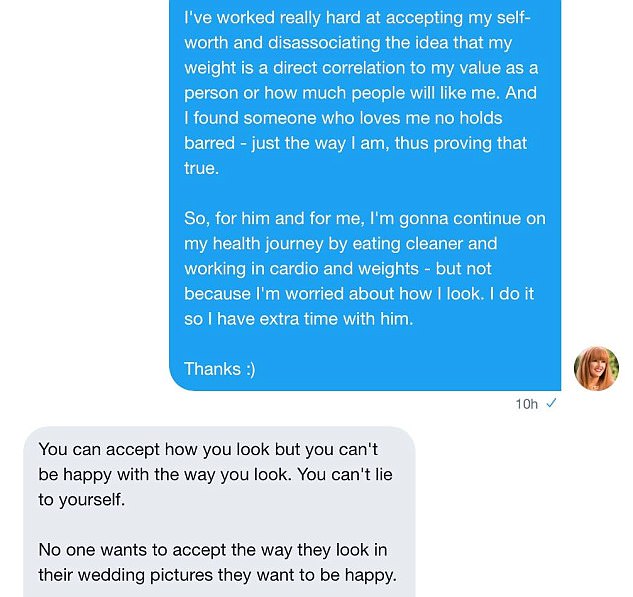 He wouldn’t stop: Cassie explained to the trainer that she’s worked hard to accept her self-worth and plans on continuing her journey on her own terms 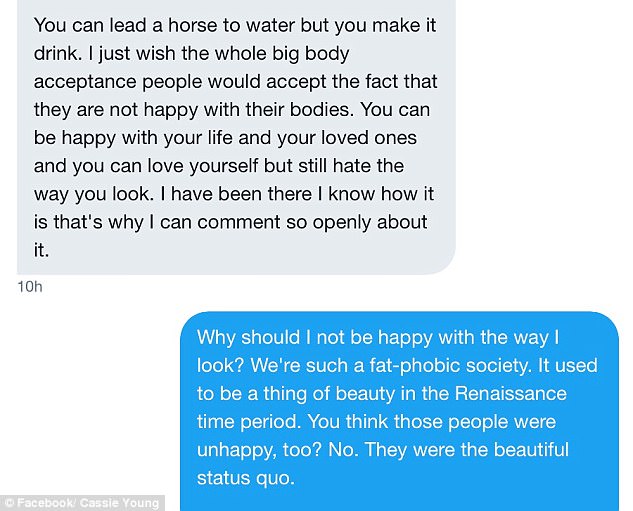 ‘Why should I not be happy with the way I look?’: Cassie reminded the rude trainer that being heavy was once considered beautiful

‘You can accept how you look but you can’t be happy with the way you look. You can’t lie to yourself…’ he rudely suggested.

‘I just wish the whole big body acceptance people would accept the fact that they are not happy with their bodies.’

The trainer then added that ‘he’s been there’ which is why he ‘can comment so openly about it’.

Cassie still tried to reason with the trainer and reminded him that fat people were once seen seen as the beautiful status quo, and that so much emphasis shouldn’t be placed on appearances.

‘I’m sad for you that your self-worth is wrapped up in appearance. You clearly place a lot of stock in looks, but fail to understand that not everyone wants to be chained to that insecurity,’ she wrote. 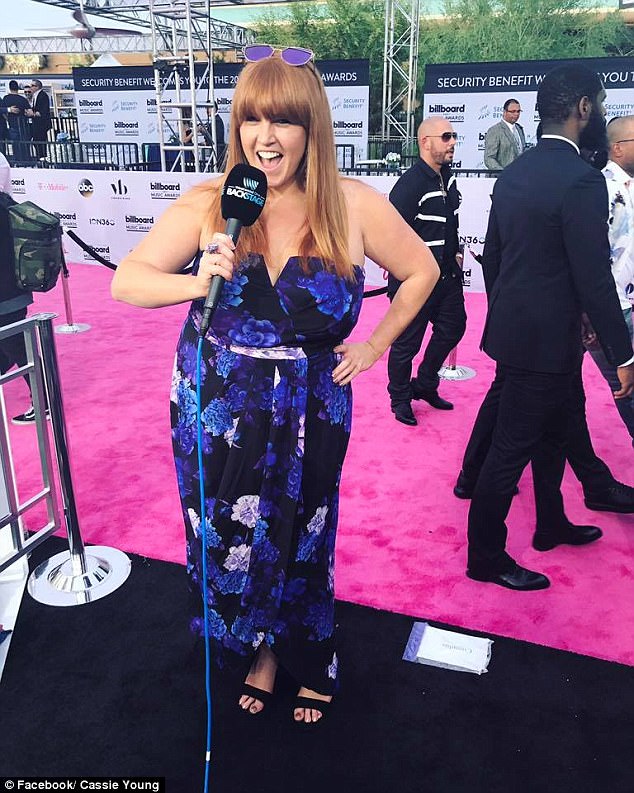 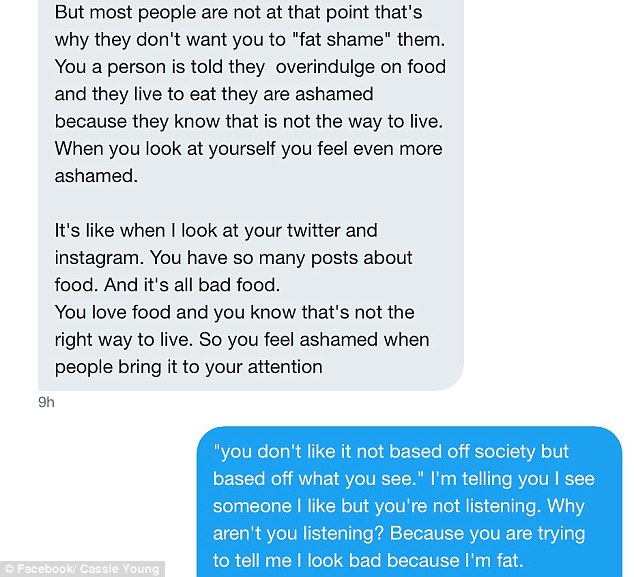 Oh no he didn’t! After Cassie repeatedly denied his offer, the trainer kept messaging her and even commented on her eating habits 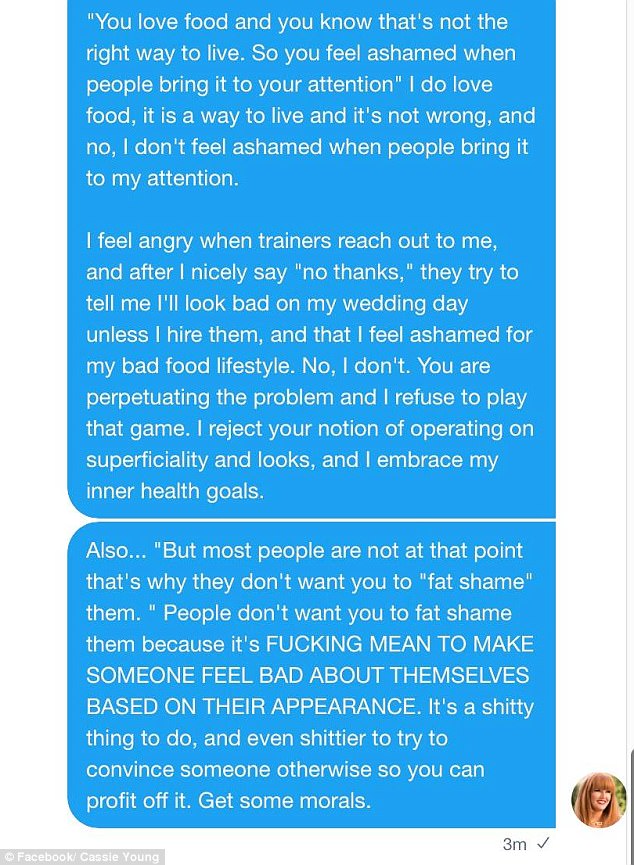 A good scolding: The bride-to-be was not willing to be body shamed and shut down the trainer for commenting on her well-being

Things then took a turn for the worse, and the tactless trainer proceeded to comment on Cassie’s eating habits, which he claimed to monitor on social media.

‘You have so many posts about food. And it’s all bad food. You love food and you know that’s not the right way to live’, he wrote.

That seemed to make Cassie finally lose her patience.

‘Get some morals,’ she said, ending the conversation, which she then posted on social media, along with a message about the importance of self-acceptance.

‘Those pounds do not define you or your worth,’ Cassie wrote on Facebook. ‘You are worthy. Love is out there for you. Life is waiting with open arms. 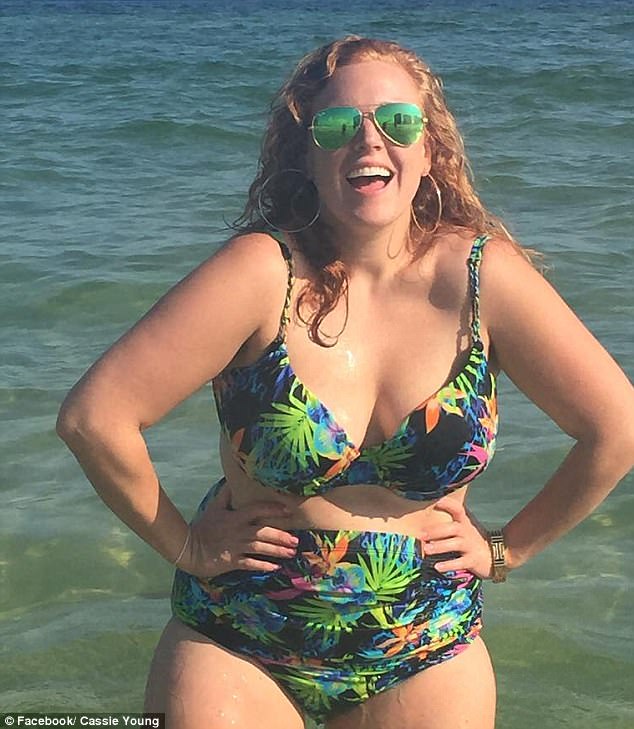 Nothing to change here! Cassie ended the exchange with the persistent trainer by telling him to ‘get some morals’ 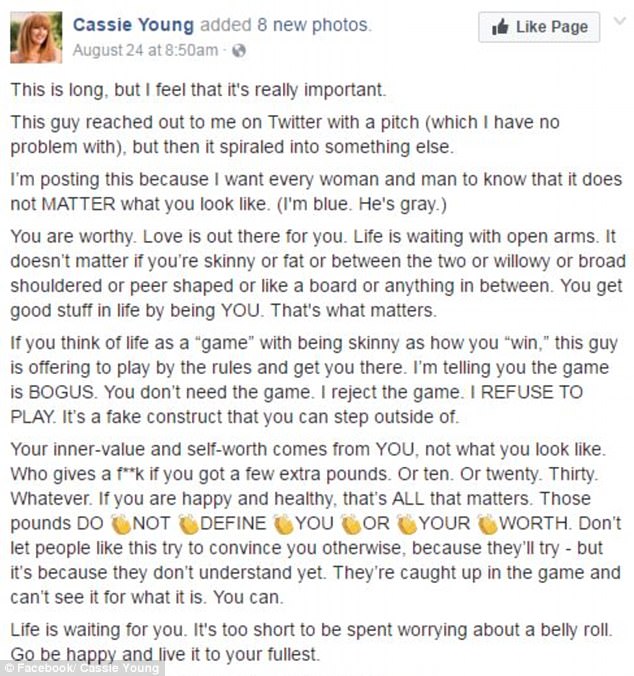 Standing up for herself: After Cassie posted the exchange on Facebook along with a positive message, it received more than 1,000 likes and hundreds of shares

‘It doesn’t matter if you’re skinny or fat or between the two or willowy or broad shouldered or peer shaped or like a board or anything in between. You get good stuff in life by being YOU. That’s what matters.’

The radio host was then flooded with supportive comments congratulating her for standing up for herself, and her post has been shared hundreds of times and liked by more than 3,000 people.

One user commented: ‘This was totally unacceptable of that trainer to put you down like that and I’m very happy to see how you stood up to him/her!! Congratulations on your engagement!’