The Atlantic Ocean could contain up to 200 million tonnes of microplastic pollution, ten times more than previously thought, a new study reports.

Scientists examined the uppermost surface of the Atlantic on a British research expedition and found 12 million tonnes of microplastics – plastic particles less than 5 millimetres in diameter.

From this they estimated the entire Atlantic Ocean, from surface to seabed, to be carrying at least an extra 178 million tonnes of plastic on top of previous estimates.

Just one million tonnes is approximately the same weight as 76,000 double-decker London buses.

There is at least 10 times more plastic in the Atlantic than previously thought, the new study reveals 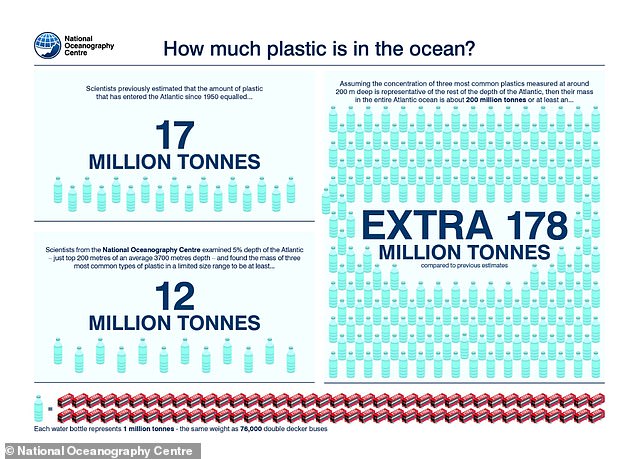 Scientists previously estimated that the amount of plastic that had entered the Atlantic since 1950 equalled 17 million tonnes.

But earlier studies hadn’t been measuring the concentrations of microplastic particles beneath the ocean surface, invisible to the human eye.

This new study considered micro particles from just the three commercially most prominent and most-littered plastics – polyethylene, polypropylene and polystyrene.

Polyethylene is the most widely used plastic in the world and is used to make shopping bags, clear food wrap and detergent bottles.

Polypropylene, meanwhile, is used to make robust products ranging from protective car bumpers, lab equipment and furniture, while polystyrene is well known for is packing and insulating properties.

‘Previously, we couldn’t balance the mass of floating plastic we observed with the mass we thought had entered the ocean since 1950,’ said study author Dr Katsiaryna Pabortsava from the National Oceanography Centre (NOC) in Southampton.

‘Our research is the first to have done this across the entire Atlantic, from the UK to the Falklands.’

They filtered large volumes of seawater at three selected depths in the top five per cent of the Atlantic, down to 650 feet.

Based on their findings, they estimate that there’s between 11.6 million and 21.1 million tonnes of plastic in this region of the ocean.

When extrapolated down to an average depth of 12,000 feet, the total amount for the whole ocean is likely to be 200 million tonnes. 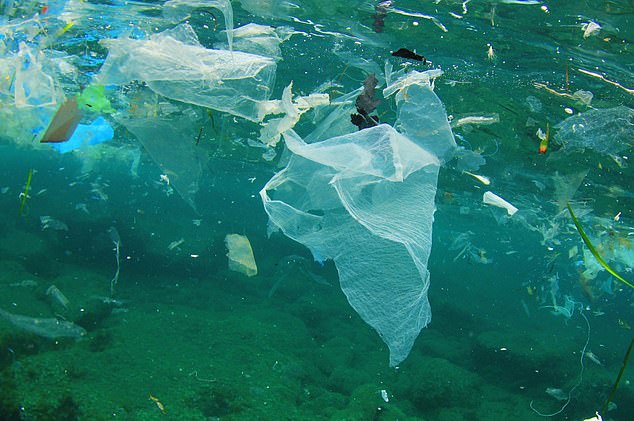 The study shows that the ocean interior conceals high loads of small-sized plastic debris, which can exceed previously estimates.

It is worth noting, however, that other sizes and polymer types could exist in the deeper ocean, which could see the figure dwarf the 200 million tonne mark.

It is now ‘critical’ to assess plastic pollution across all size categories and polymer groups to determine ‘the fate and danger of plastic contamination’, the experts say.

‘In order to determine the dangers of plastic contamination to the environment and to humans we need good estimates of the amount and characteristics of this material, how it enters the ocean, how it degrades and then how toxic it is at these concentrations,’ said study co-author Professor Richard Lampitt, also from NOC.

‘This paper demonstrates that scientists have had a totally inadequate understanding of even the simplest of these factors, how much is there, and it would seem our estimates of how much is dumped into the ocean has been massively underestimated.’

NOC’s research into marine plastic contamination aims to better understand the magnitude and persistence of exposure to plastics and the potential harms it can cause.

Nina Schrank, a Greenpeace campaigner, said: “Microplastics have been found everywhere from the Arctic to the Mariana Trench, in our seafood and even the air we breathe.

‘We know that particles of plastic are present in every ocean and every river that’s been tested, but we’re still drastically underestimating how much plastic is entering the environment.

‘Action from retailers and brands on cutting throwaway plastic still doesn’t come close to matching the scale and urgency of the problem. And the problem could be even bigger than we thought.’

The study has been published in the journal Nature Communications.

Microplastic pollution has been found in human organs — with scientists fearing the tiny particles could increase the risk of infertility and cancer — a study has reported.

Experts from the Arizona State University are the first to show that the tiny plastic particles — which form when larger plastics break down — can enter our tissues.

Microplastics are typically less than 0.2 inches (5 mm) across, but so-called nanoplastic particles can be as small as a fiftieth of the width of a human hair.

Previous studies had established that the particles can be ingested by humans and animals — such as via drinking water — and pass through the gastrointestinal tract.

The latest findings, however, are the first to show that they can also accumulate within human organs including the kidneys, liver and lungs.

Although the health impacts of this build-up in humans is unknown, experts have linked microplastic pollution to inflammation, infertility and cancer in animals.