‘It’s not a nice gesture, but I felt the need to do it:’ Atletico Madrid boss Diego Simeone apologises for ‘cojones’ gesture during Champions League win over Juventus

Diego Simeone has apologised for his ‘cojones’ celebration during Atletico Madrid’s 2-0 victory over Juventus in their Champions League last-16 clash.

The Argentinean turned to his own supporters and grabbed his crotch with both hands after Jose Maria Gimenez had bundled home the opening goal.

It was a moment of relief on a frustrating night for the Spanish side, who had already seen a penalty decision overturned by VAR and an Alvaro Morata header ruled out for a push by the same process.

But despite his over-exuberant celebration, the 48-year-old insists that the actions were not aimed at the opposition, revealing it’s a gesture he’s used in the past.

‘I did it as a player in Lazio-Bologna and I did it again to show our fans that we have cojones,’ he told reporters.

‘It wasn’t aimed at the other team, I was turning towards our own supporters 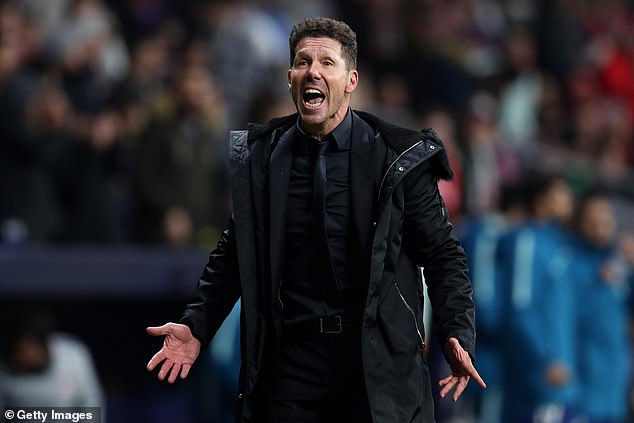 ‘It’s not a nice gesture, I admit, but I felt the need to do it. It was such a tough game, we fought so hard and Diego Costa worked really hard when he wasn’t 100 per cent fit.

‘To put in Costa and Koke after so long out you must have balls.

‘I had to show what I was feeling. I can only apologise if anyone was offended, but I did it from the heart.’