Look, they came back from 3-0 down against Barcelona. This is Liverpool, remember. Yet something about Atletico Madrid’s sheer cussedness last night suggests putting two past them, even at fortress Anfield, is going to be as tough as it can get.

This was a stunning rearguard action from the Spaniards, made all the more impressive by the length of the endurance: Atletico Madrid took the lead after just four minutes. Taking injury time into account they had to hold out for 90 minutes plus against the best attacking team in Europe. They did it. Not prettily, not always comfortably, but with determination that is rare these days: the determination to simply defend.

The best of Jose Mourinho’s side can do it, and the best of Diego Simeone’s. They are pretty much alone these days, though. Liverpool work hard, but their emphasis is on going forward. Atletico Madrid scored early and, as the saying goes, shut up shop. They are few shop shutters left in the modern game. In its own way, this was really rather beautiful. 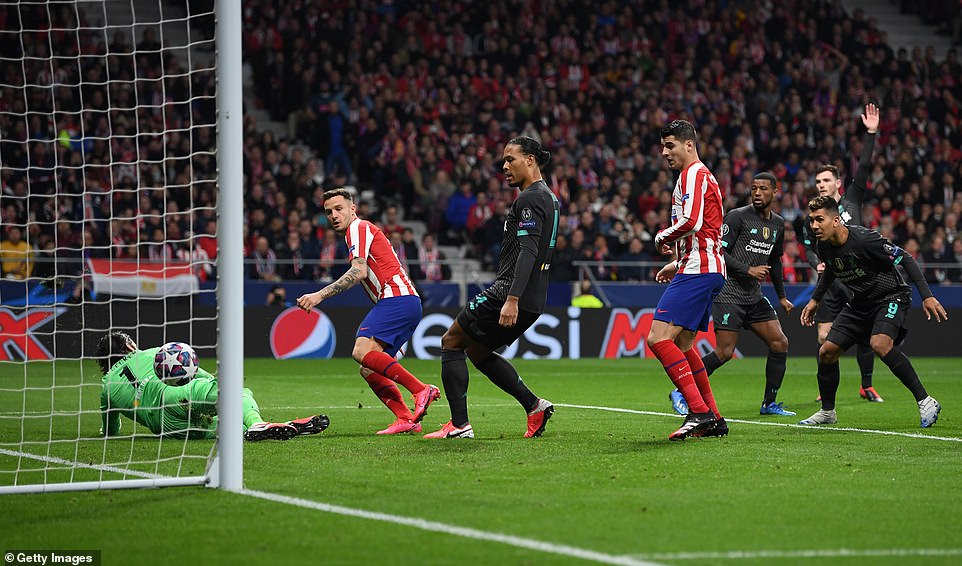 Played onside by Van Dijk, Saul latched onto a loose ball in the box and finished with composure past a helpless Alisson 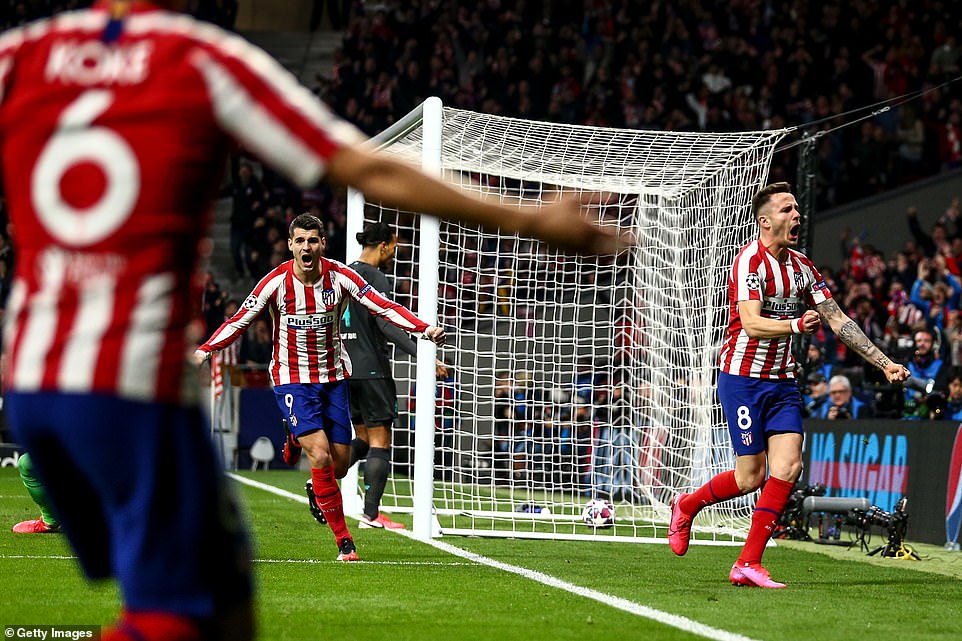 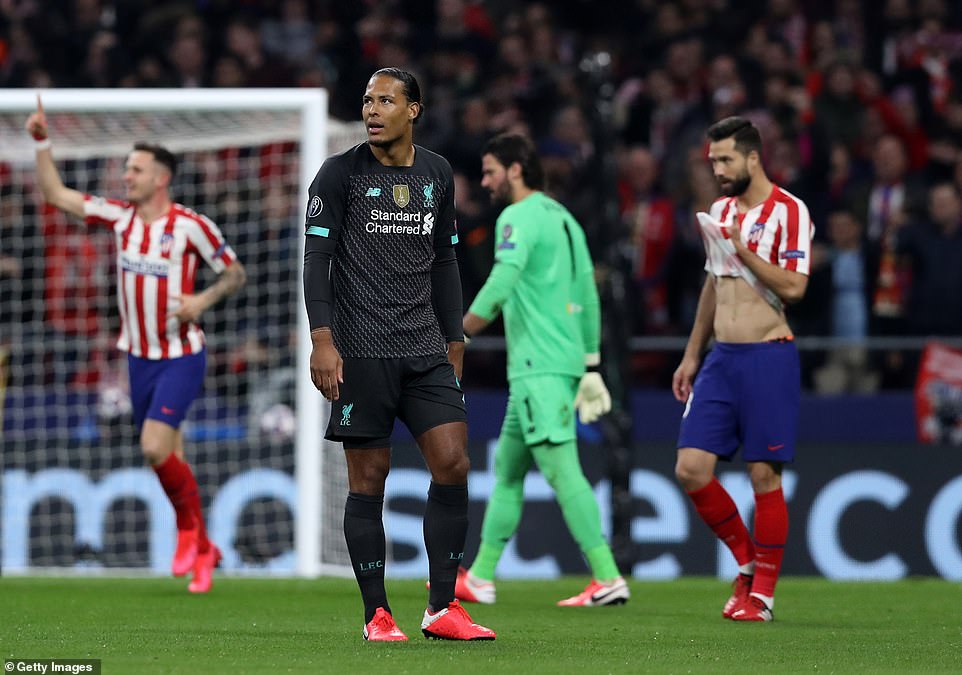 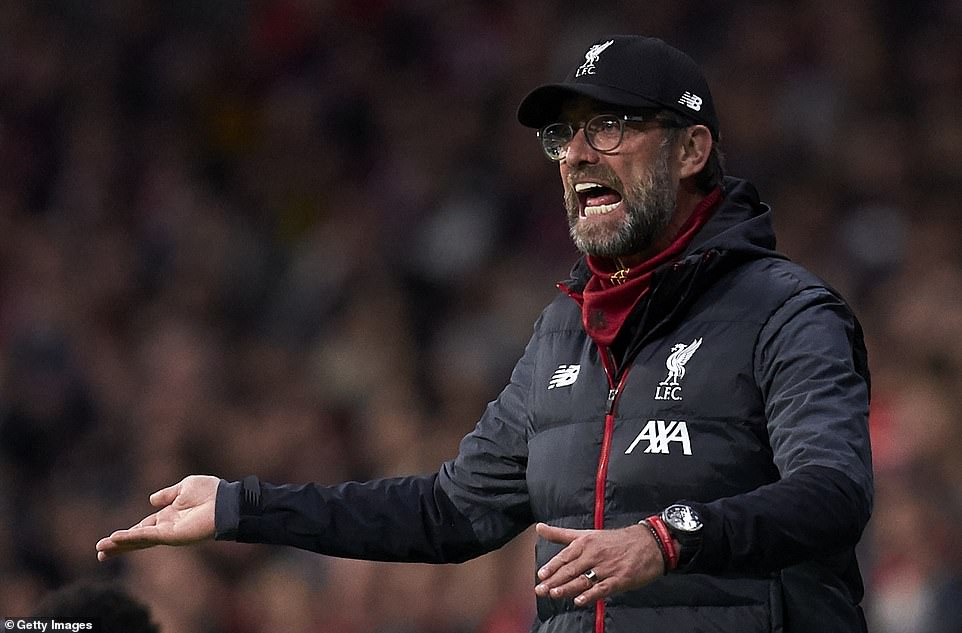 Ratings by Pete Jenson at the Wanda Metropolitano

By the end, Jurgen Klopp had been booked for losing his cool, had replaced Sadio Mane – although a booking and some Madrid pressure to get the decision elevated to red may have played a part there – and Mo Salah, in his desperation to find a way through. It is rare we see Liverpool frustrated like this, but a replica Atletico Madrid does not exist in English football. Even at bottom club Norwich on Saturday, Liverpool faced a team that wanted to attack. Madrid don’t. Once they took a scrambled lead they were happy for Liverpool to have the ball, and to retreat into space-crushing banks

At Anfield next month, they will start as they played here. If they can kill the game with a counter-attacking away goal, fine. If not, they will be happy to have a goalless draw as the height of their ambition, and it will be up to Liverpool to break them down.

Just as it was here, yet they couldn’t do it. Indeed, the best chance of the half was a Madrid counter-attack through Renan Lodi, which was played into Alvaro Morata in a lovely position to finish the match, maybe even the tie given Madrid’s powers of resistance, and he made a total mess of it. Morata panicked, slipped and skied. It was his last involvement of the match, and he hobbled off as if injured. He certainly didn’t look injured before that miss. Maybe it was the pain of embarrassment.

There is a reason Diego Simeone is the highest paid club manager in the world, and it was made obvious in the first 45 minutes here. He is at a palpable disadvantage in his domestic league, not to mention across Europe, his club continues to lose its best players to major rivals yet, somehow, he has made Atletico Madrid arguably the hardest team to beat, certainly at home. 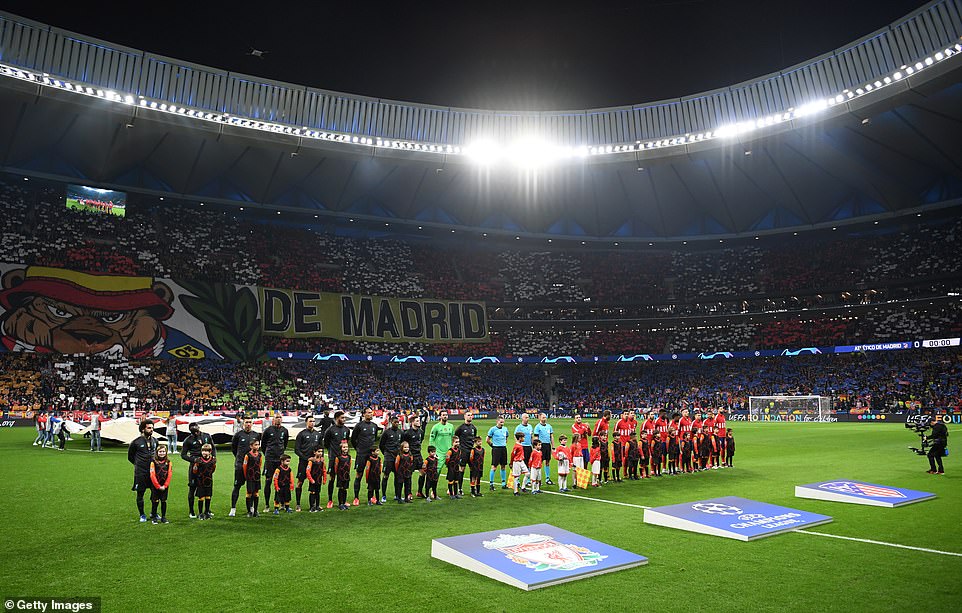 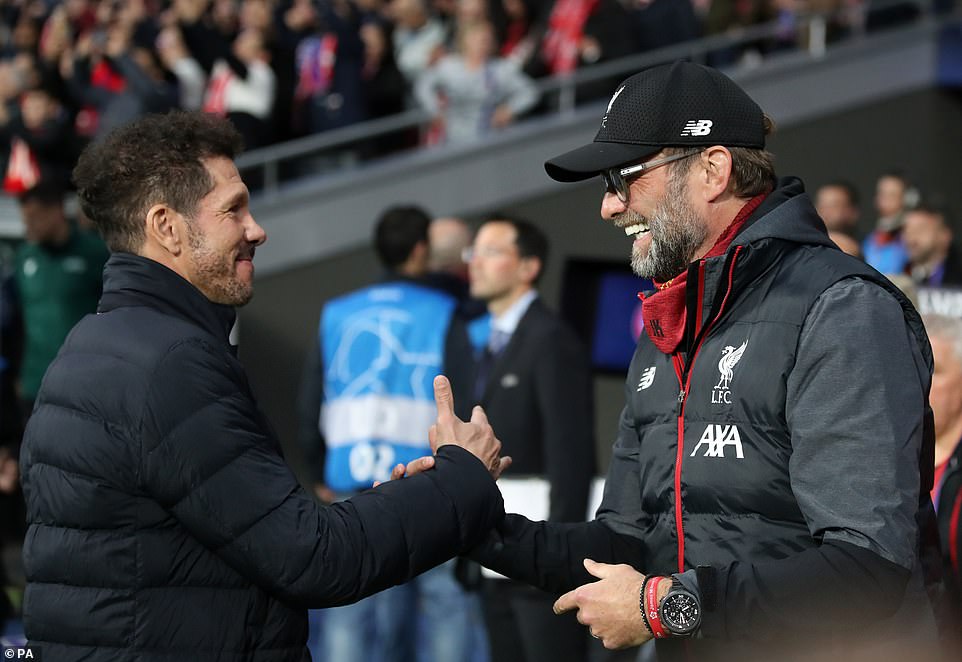 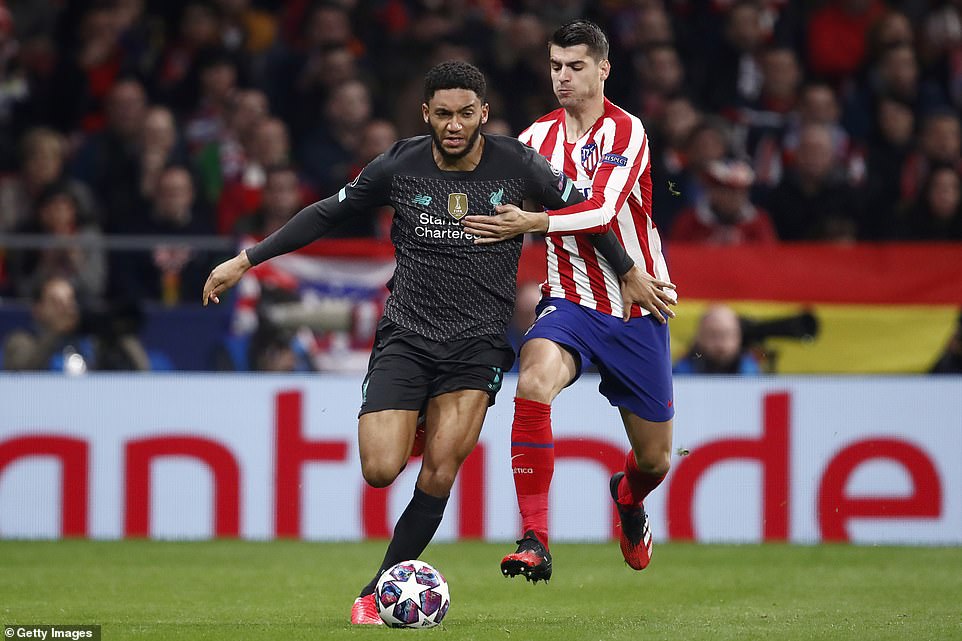 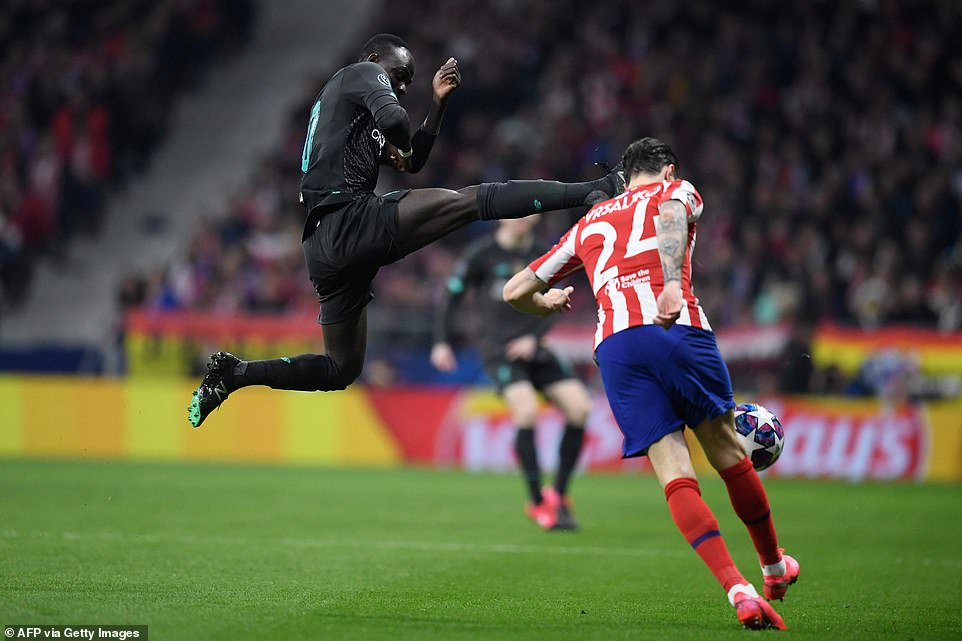 They had not conceded in ten of their last 11 Champions League knockout games paid on home territory and the moment they took an early lead here it was obvious the sort of night Liverpool had ahead. Koke, the captain and a fine, imaginative midfielder, immediately fell in at surrogate right-back to deal with Andy Robertson; on the other flank Trent Alexander-Arnold was being kept at arm’s length, much as a champion boxer deals with a dangerous opponent. He couldn’t get in range of the Madrid goal and was reduced to hitting two hopeful balls from deep that flew too long. He could not find his range and, frequently, neither could Liverpool.

In the first 30 minutes they managed one touch between them inside Atletico’s penalty area. Their only chance of the first-half was a Salah shot that was deflected for a corner by Felipe. It is hard to recall when Liverpool have looked less threatening. They haven’t even been behind in 21 matches in all competitions, since trailing Napoli on November 27.

That changed after just five minutes here. Madrid won a corner, swept in by Koke and deflected off Fabinho, who was looking a little rusty having missed a chunk of the season through injury. The ball squirmed to Saul Niguez who turned it past Alisson from close range. Briefly it looked as if VAR might intervene but, even if Fabinho’s touch had been ruled entirely inadvertent, Virgil van Dijk was playing the Madrid man onside. Liverpool’s players looked at the big screen in vain. No reprieve this time. 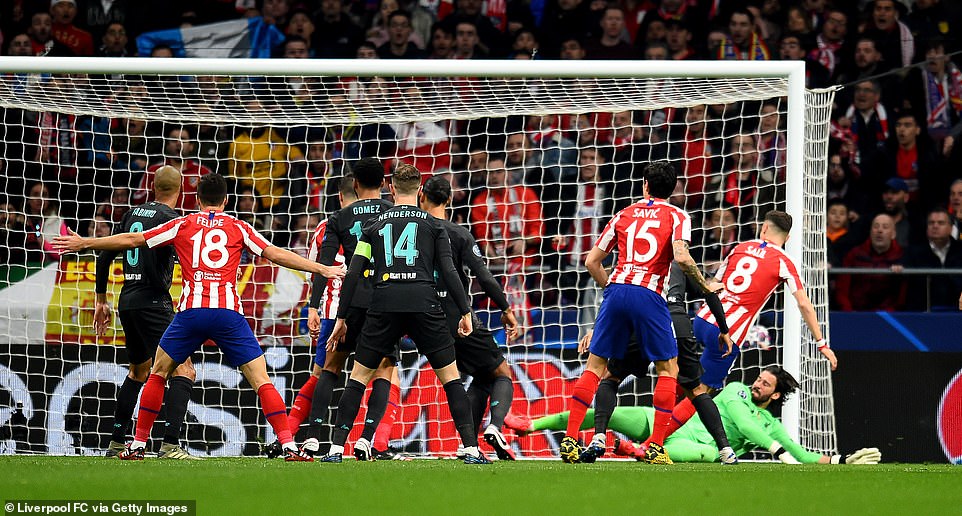 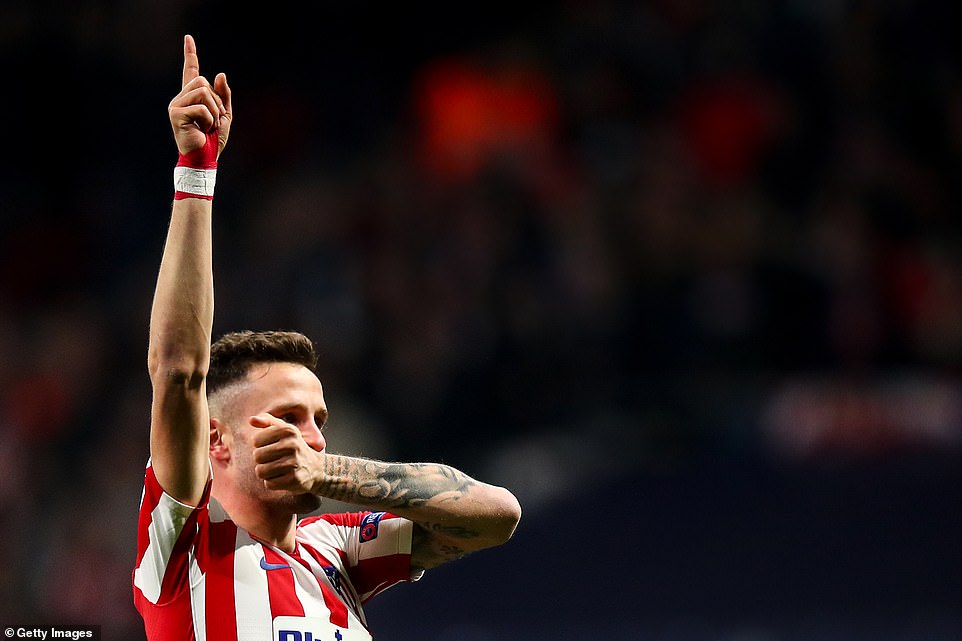 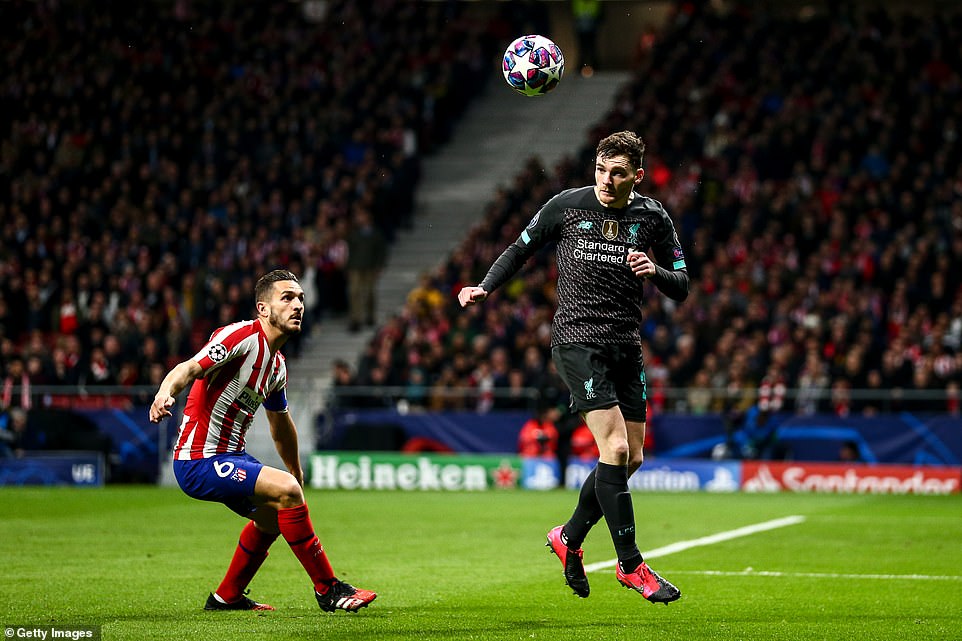 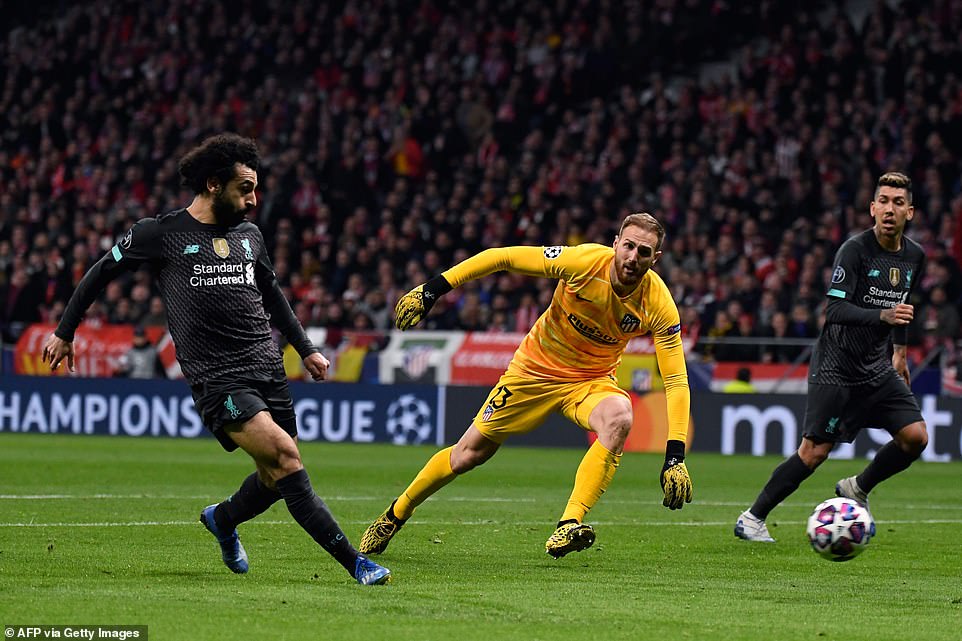 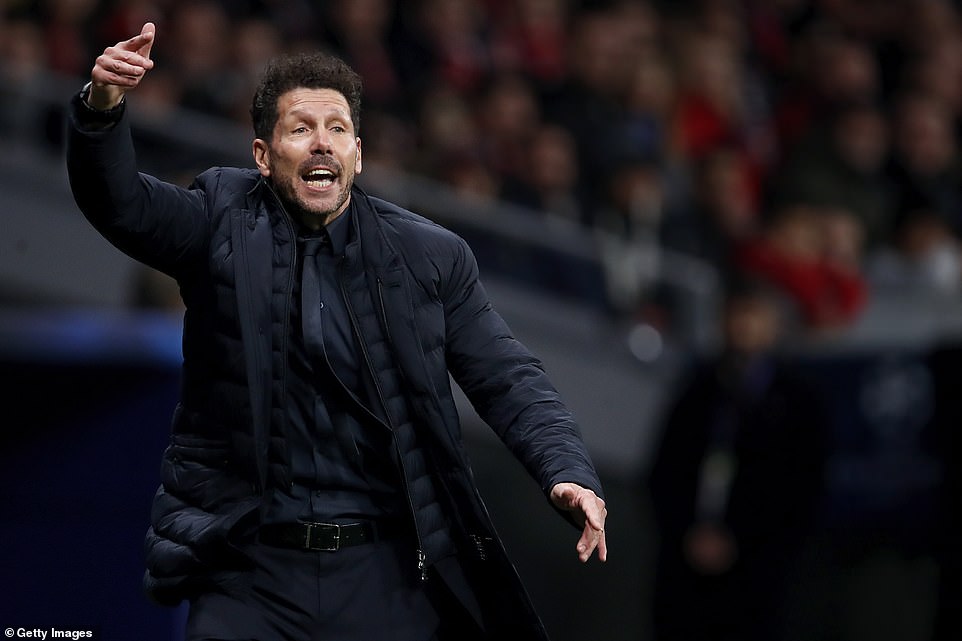 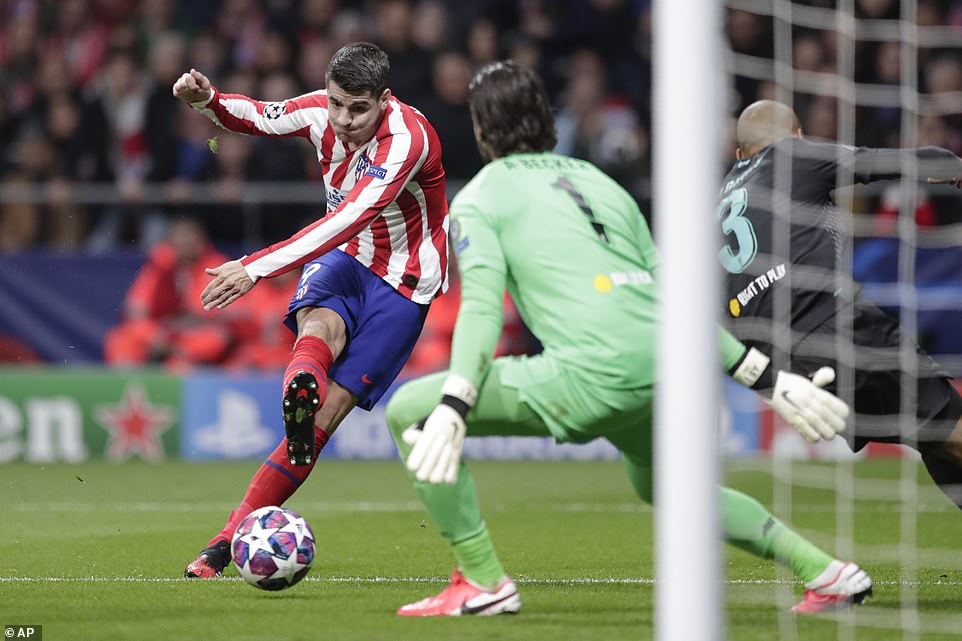 It could have got worse, and swiftly, had Robertson not diverted a cross from Thomas Lemar which appeared to be heading in the direction of Angel Correa, unmarked on the far side. Scoring goals has been Madrid’s problem in what many consider a season of transition and followers of Chelsea will have an idea why. Alvaro Morata was their attacking spearhead here, a striker who spent more time on the floor during his spell at Stamford Bridge than a one-legged drunk in a can-can contest. Ill-equipped for the physical battles of the Premier League this was never likely to be his game, and he made a hash of his one chance of the opening half, after 26 minutes.

It was another error in Liverpool defensive line that let him in – never have van Dijk or Fabinho appeared so vulnerable – and Morata sped through with only Alisson to beat, before shooting straight at him. By the time the second-half began, no wonder Simeone was more intent on holding what Madrid had rather than going in search of a more emphatic victory. Off came Lemar, on came Marcos Llorente, a young player adept at holding midfield. Simeone even took an interest in the balls, selecting one and chucking another back, like a tennis player on centre court. It is this type of attention to detail that commands the big bucks, and explains why Atletico are yet to lose a Champions League knockout game on his watch at home.

For his part, Jurgen Klopp replaced Sadio Mane, who had a quiet 45 minutes, with Divock Origi at half-time, but it was Salah who enjoyed the first chance of the second-half, heading a long ball from Joe Gomez just wide. Yet while Liverpool continued to build pressure, enjoying 75 per cent possession for much of the game, Madrid’s resistance was equally powerful. It is hard to think of a side quite like them in the modern, free-wheeling game. 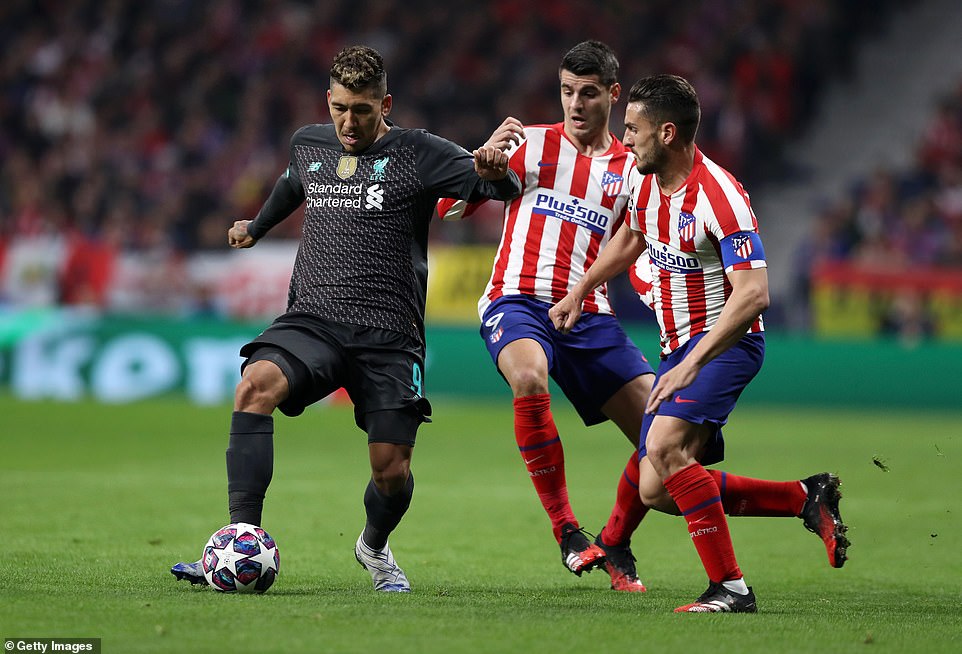 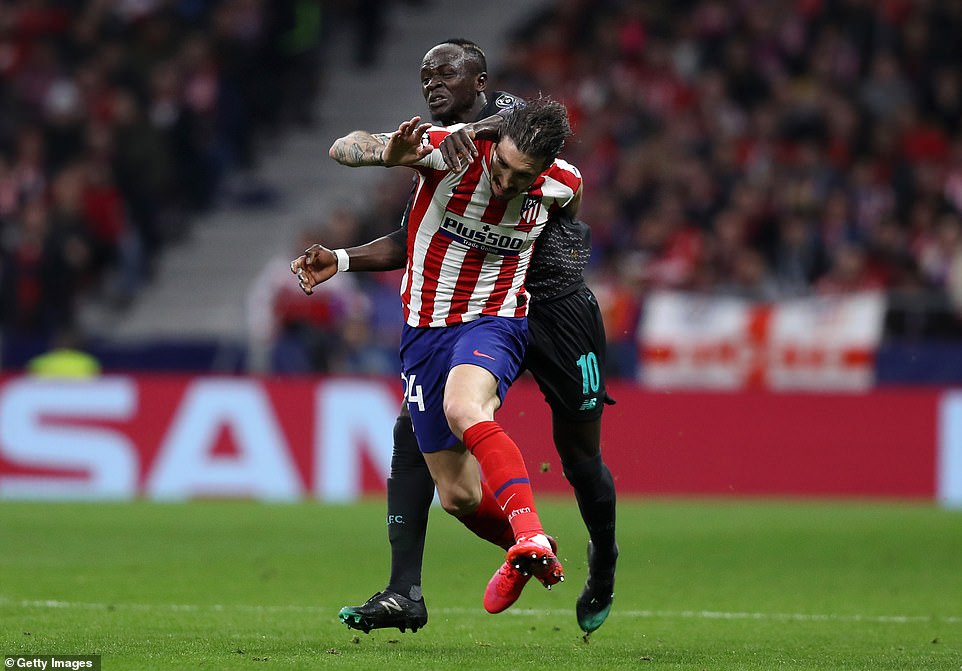 Mane, booked for this incident with Vrsaljko, was taken off at half-time after it looked as though his temper may overcome him 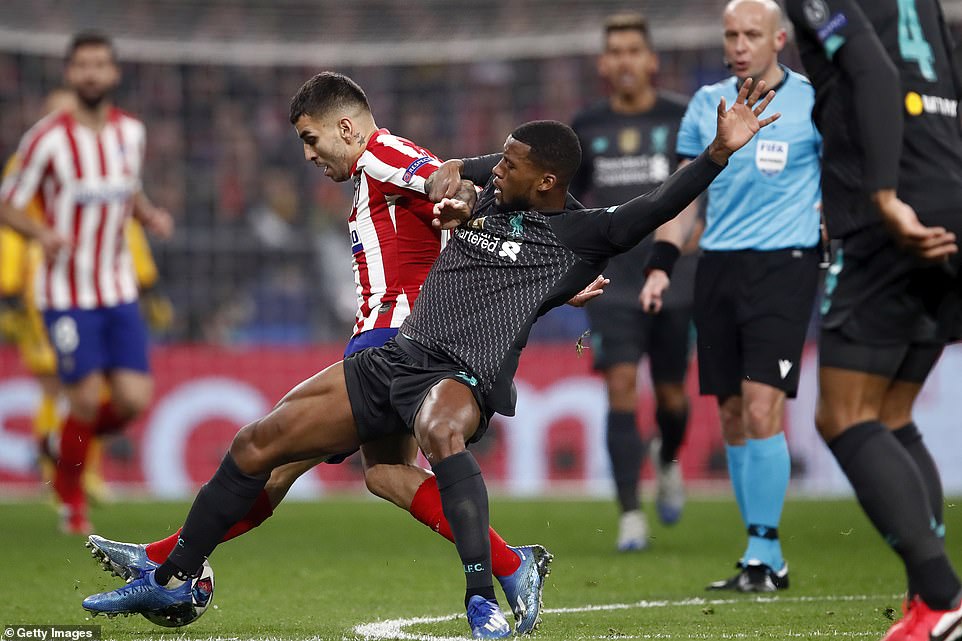 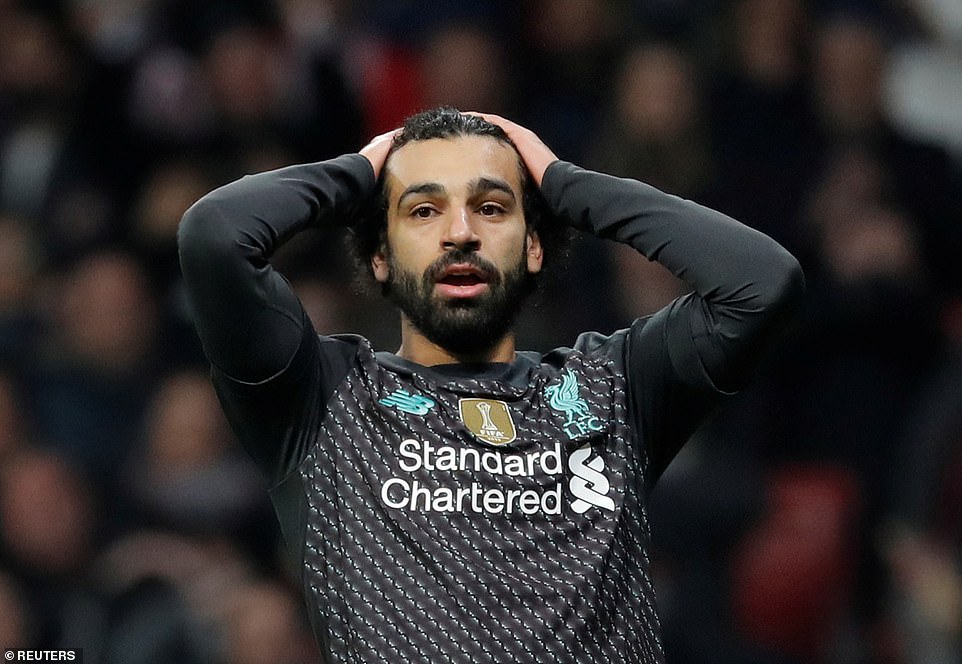 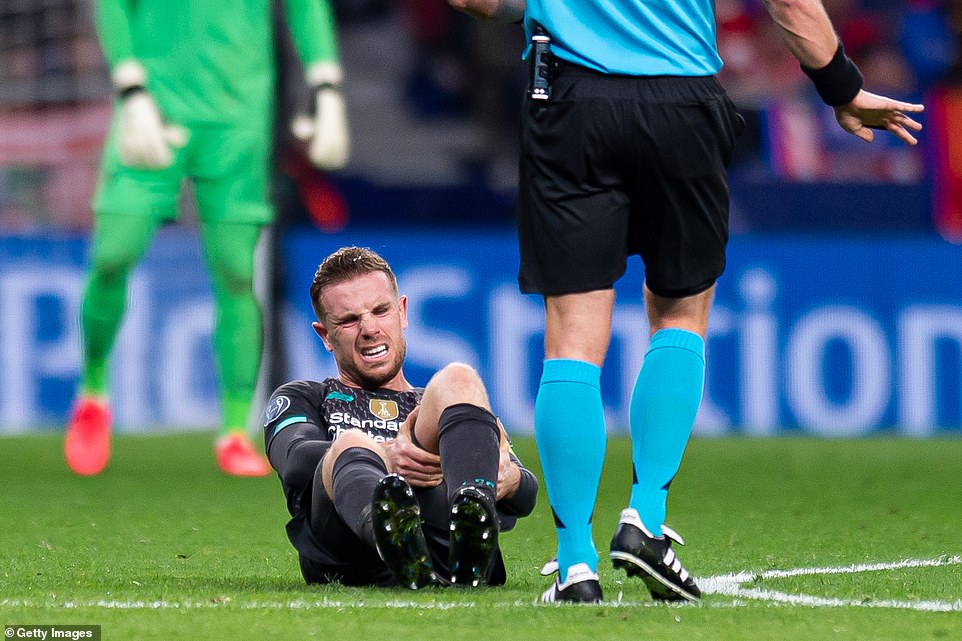