The ball brushed off of Cristiano Ronaldo and hit the back of the net… the Juventus net. His return to Madrid ended in a 2-0 defeat that goes a long way to end his dream of winning a sixth Champions League back in the Spanish capital next May.

Twice Atletico Madrid believed they had possibly edged ahead of Juventus but twice their supporters were silenced by VAR. They kept going and when Jose Gimenez scuffed the loose ball over the line on 78 minutes there were flailing arms and falling bodies everywhere but no one had broken any rules and for all Juventus’ complaints the goal stood.

Anything one Uruguayan centre-back could do, the other one – Diego Godin – could do just as well and his Ronaldo assisted second leaves Juventus with a mountain to climb in next month’s second leg. Jan Oblak saved brilliantly at the end from Federico Bernardeschi and Ronaldo headed agonisingly wide but it finished 2-0. 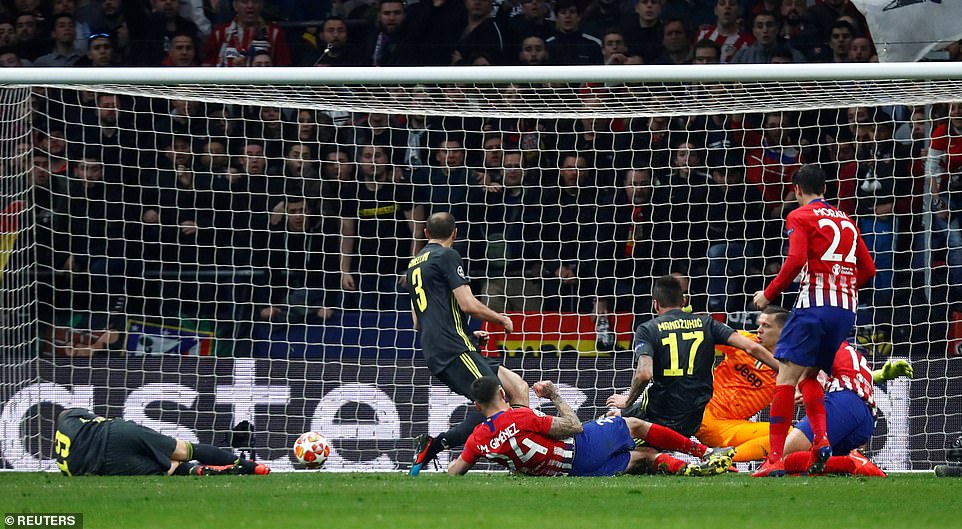 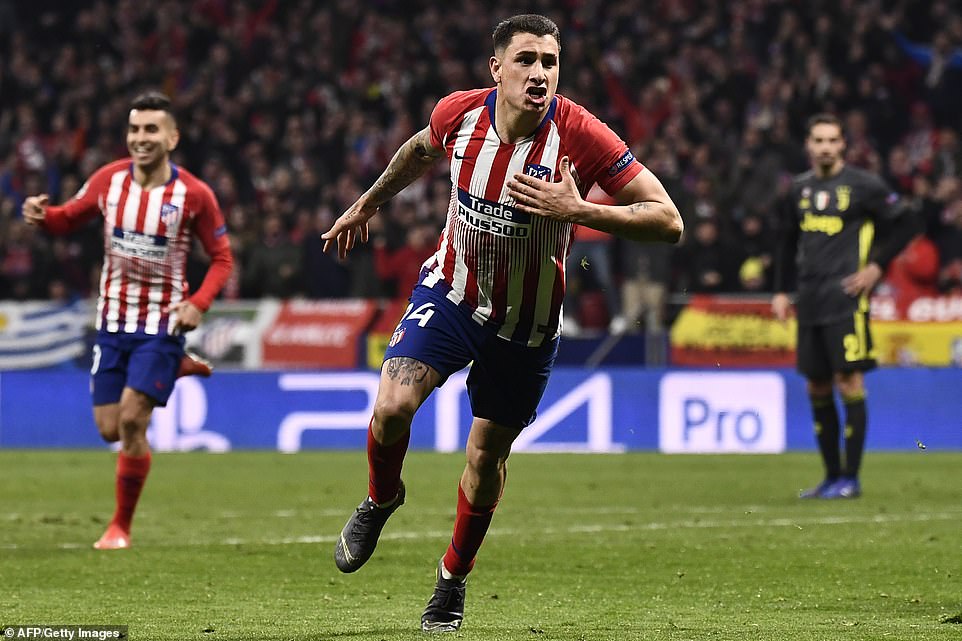 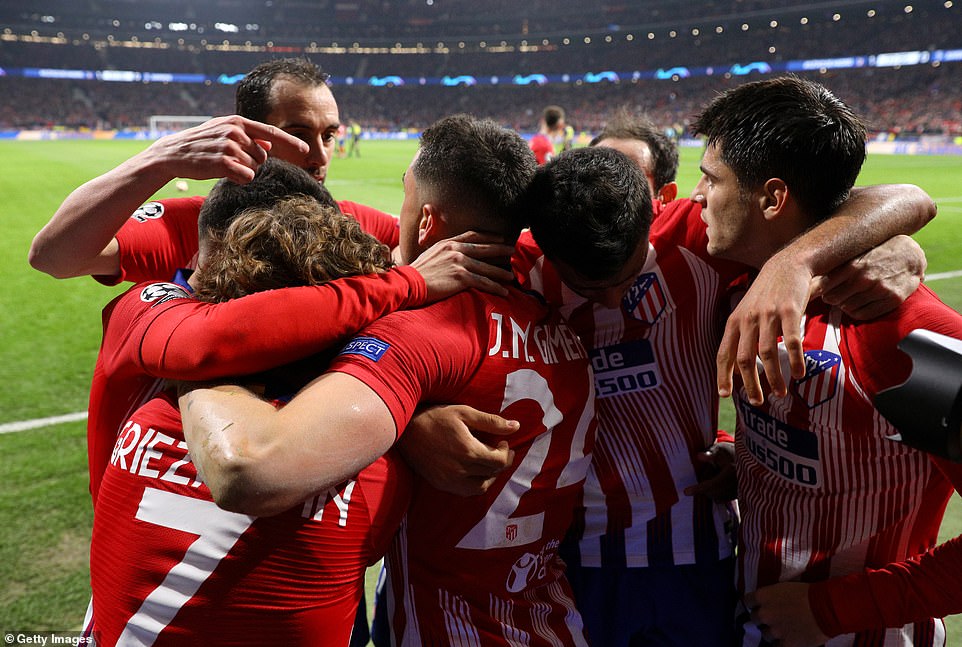 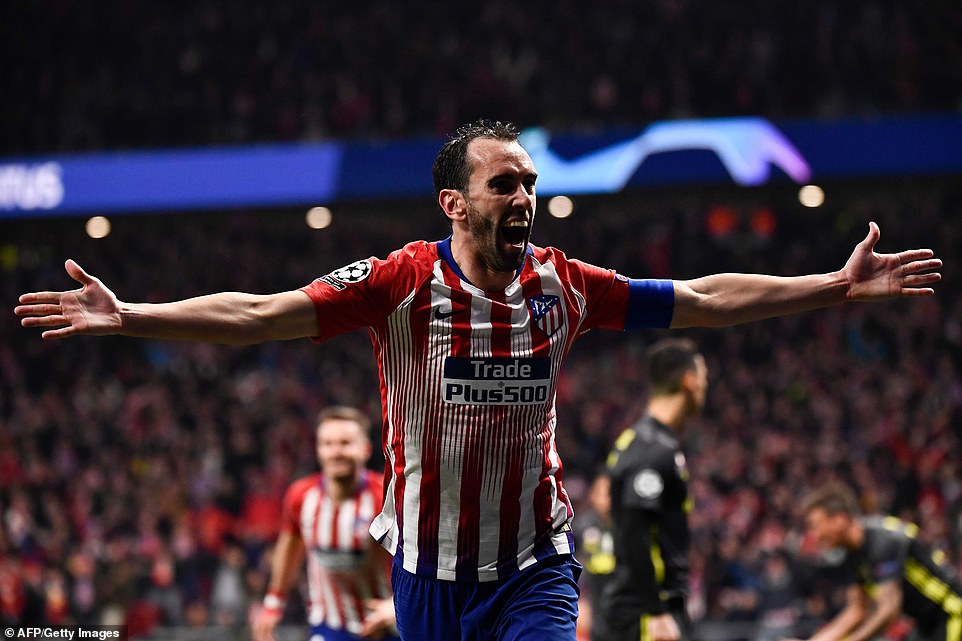 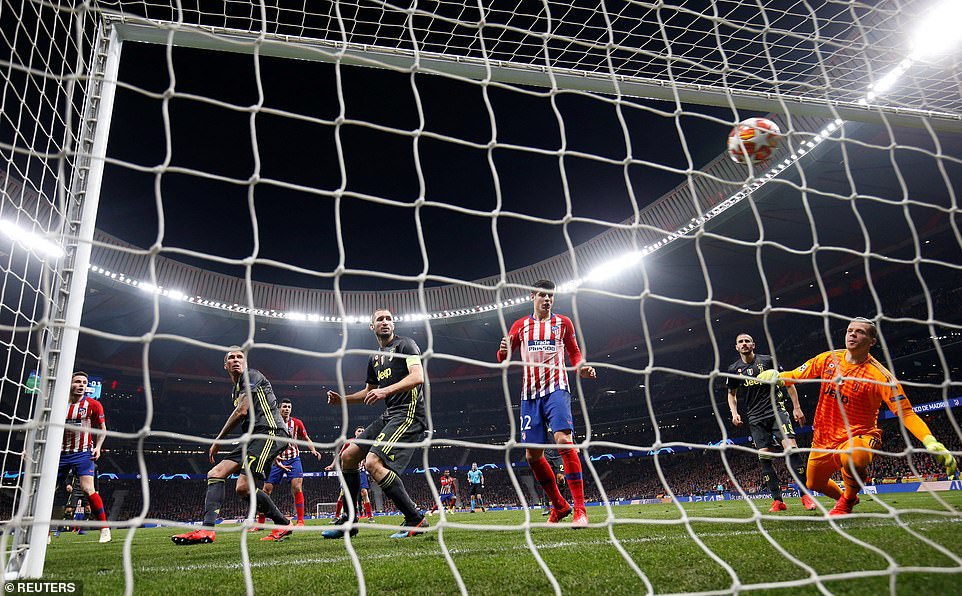 The veteran Uruguayan scored from an acute angle, via a deflection off Cristiano Ronaldo, to give Atletico a 2-0 lead 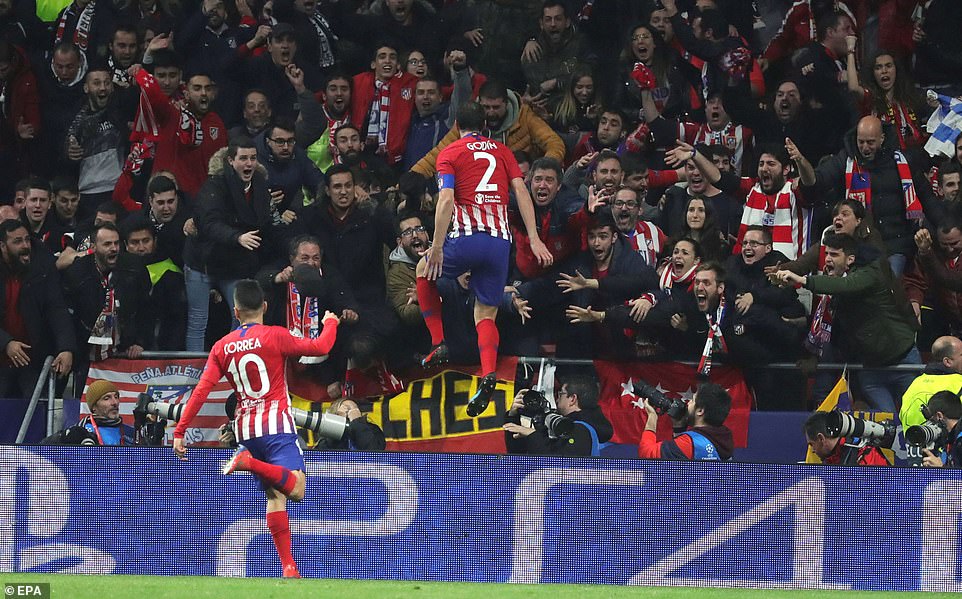 The night had started so promisingly for Ronaldo who almost scored after just eight minutes. He was fouled by Gimenez 30 metres out. As referee Felix Zwayer ordered, and re-ordered, the wall back Diego Costa appeared to creep forward and then jump back.

The referee booked him ruling him out of next month’s return leg. It was like Al Capone being done for tax evasion – of all the skulduggery he might have had planned for the evening and he was in the book and suspended for not being 10-yards back from a free-kick.

Ronaldo’s subsequent thunderous free-kick was creeping under Oblak’s bar but the Atletico keeper pushed it over. Not for nothing did Diego Simeone make keeping Oblak one of the conditions of his contract renewal last week.

Ronaldo – greeted by a an inflatable doll with one of his old No 7 Real Madrid shirts on it behind the goal – was in the mood to remind the Spanish capital what it was missing.

Thomas Partey’s shot then tested Wojciech Szczesny. Thomas was everywhere and he combined with Koke to sweep Atletico forward from midfield. When the ball reached Mattia De Sciglio he placed a hand on the shoulder of Costa and there was a tangle of ankles with Costa going to ground and making sure he was in the area when he hit the deck.

Referee Zwayer pointed to the spot but VAR corrected the decision. The foul had been outside the area. From the free-kick Antoine Griezmann went for goal but Szczesny saved at his near post when the Frenchman surprised everyone by going for goal. 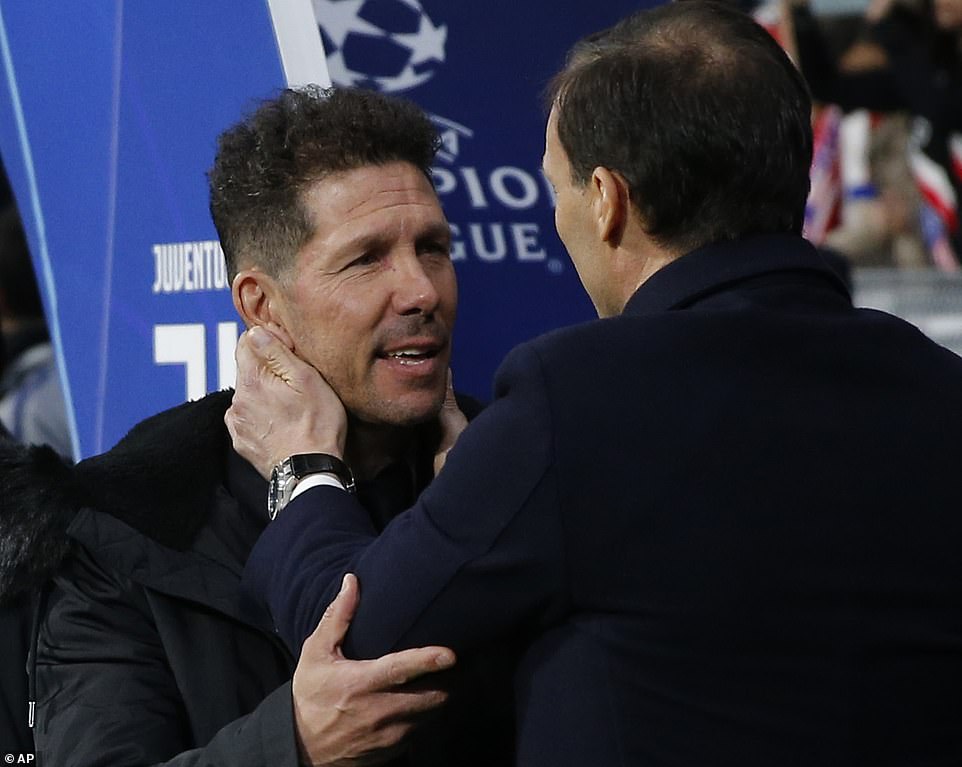 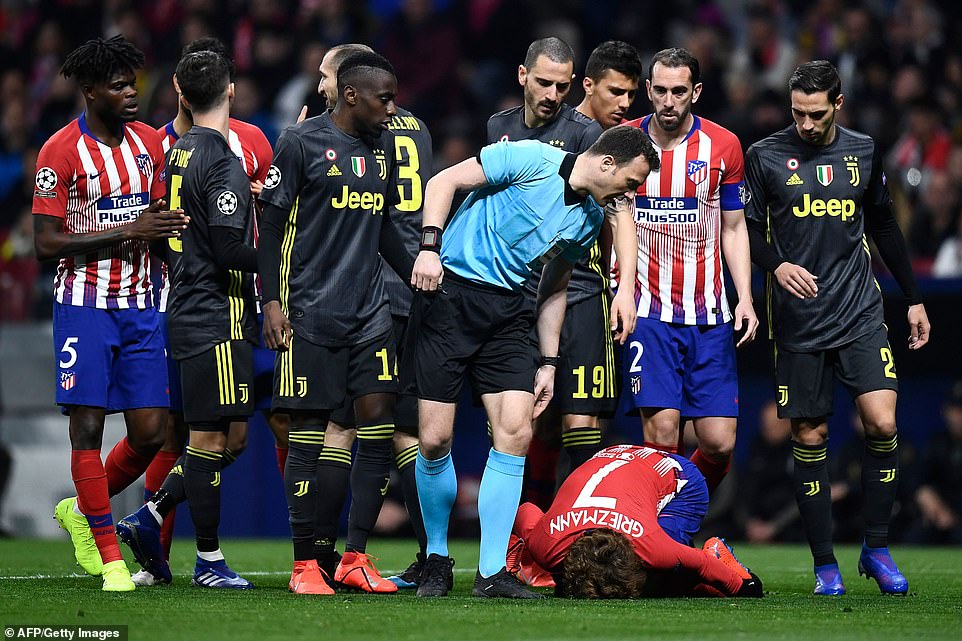 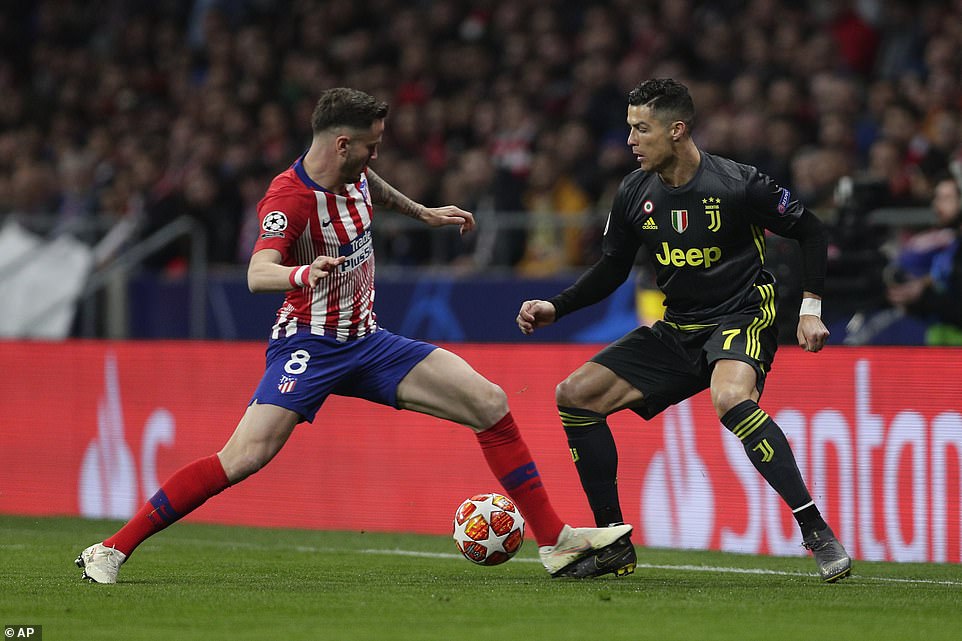 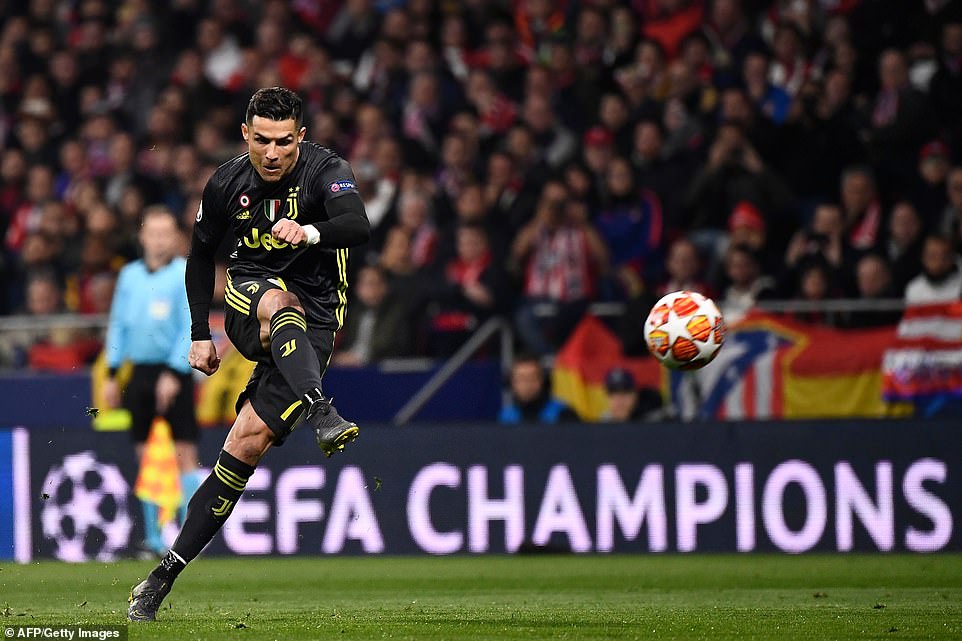 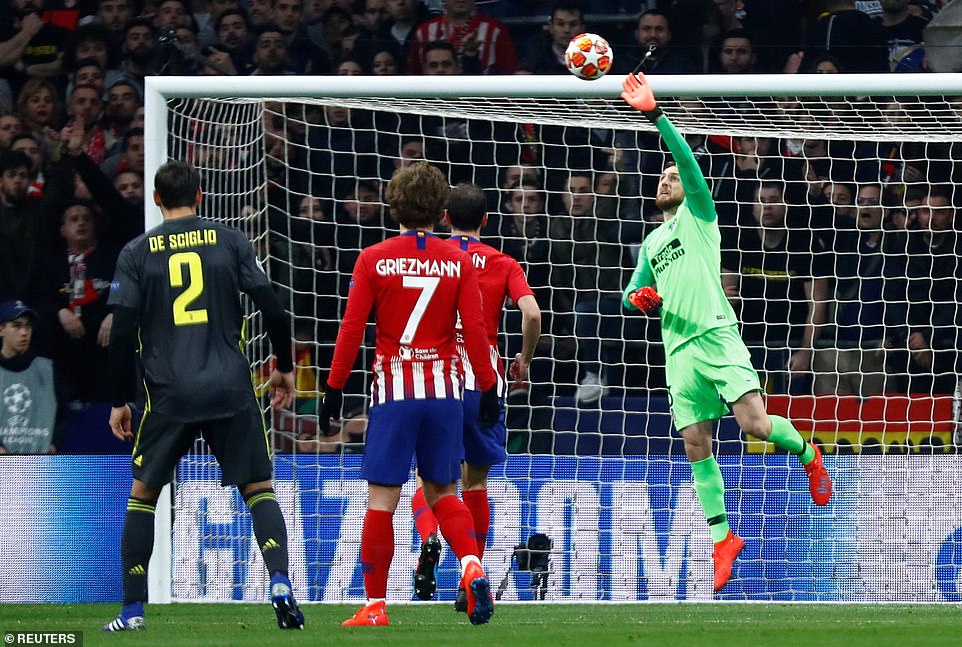 However, Atletico goalkeeper Jan Oblak did well to tip Ronaldo’s 30-yard free-kick over the crossbar 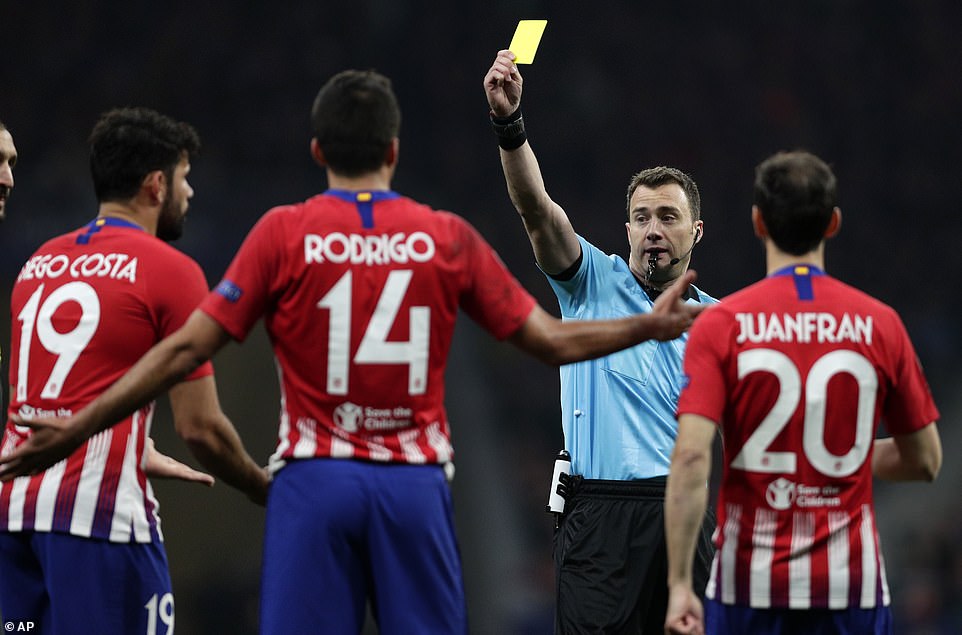 Before the free-kick was taken, Diego Costa was booked for encroachment in the wall – meaning he will miss the second leg 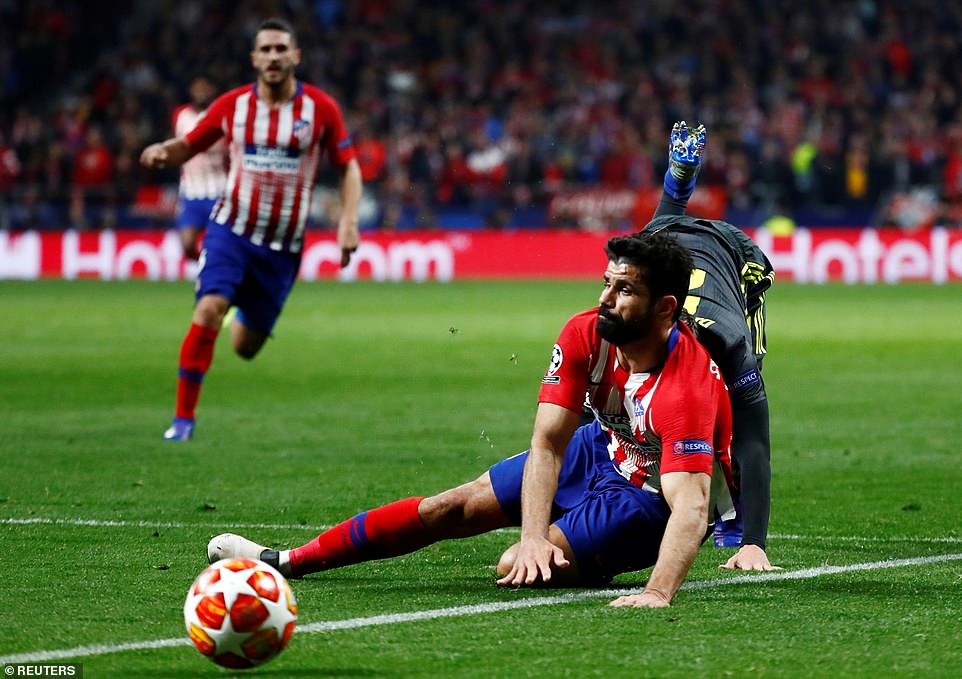 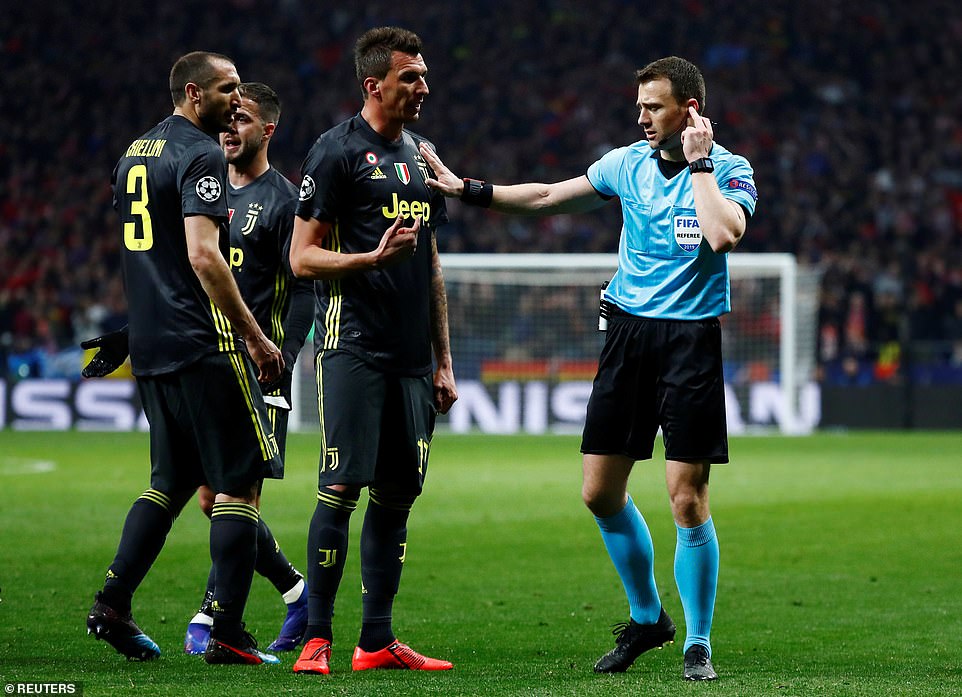 After initially awarding the spot-kick, German referee Felix Zwayer was told to review the decision by his VAR officials 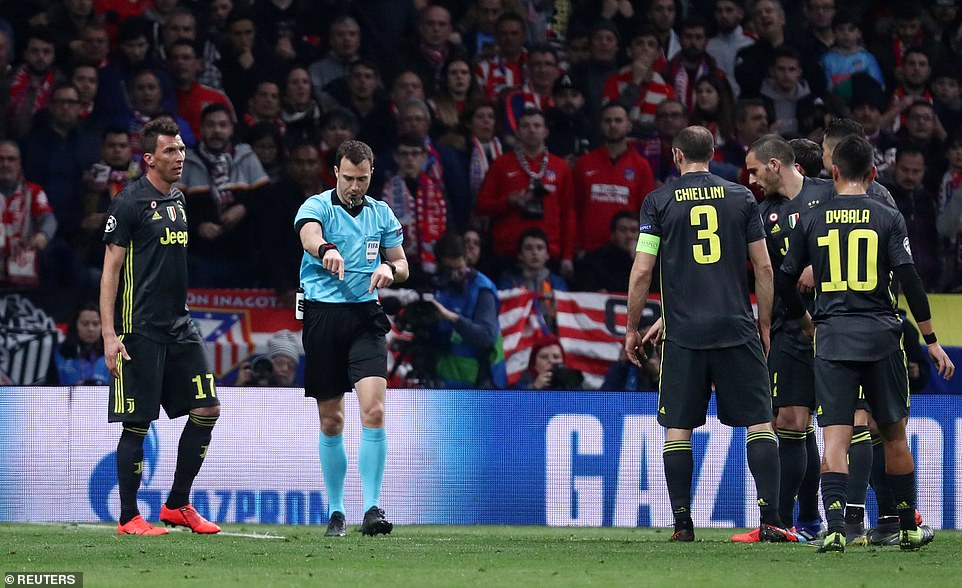 After inspection on the decision, Zwayer overturned his initial decision and awarded a free-kick on the edge of the Juve box

Costa, crocked for 75 days straight until his reappearance at the weekend, and Ronaldo 34, two weeks ago, were playing like teenagers and the tempo of the game showed no signs of letting up.

Thomas was pouncing on Miralem Pjanic at every opportunity. It was Rodrigo’s job to pick up Pablo Dybala when he came to play between the lines. He didn’t do his job but again Oblak saved.

Simeone, meanwhile, continued to man-mark the fourth official cursing every time a Juventus foul was not punished with a caution and cursing when Thomas hacked down Dybala and picked up a yellow that will also rule him out of the second leg.

At the end of the half Ronaldo tried to get away down the left but first Saul and then Juanfran stamped on his ankle. Saul only just caught him but Juanfran made full contact.

The Metropolitano Stadium teased Ronaldo with ‘pay your taxes’ chants. He responded by showing five fingers – one for every Champions League he has won, two against Atletico. 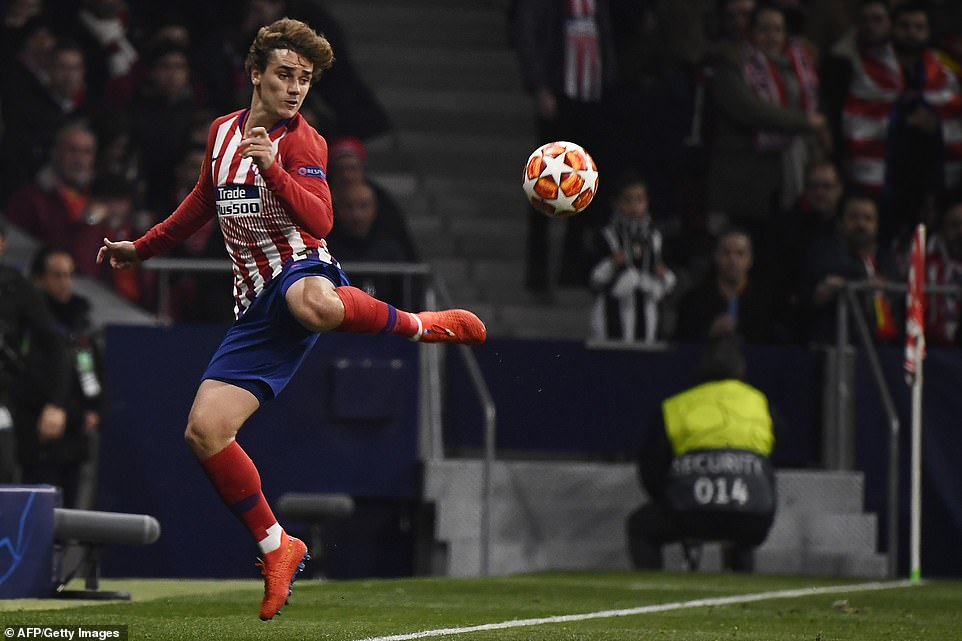 Griezmann endured a quiet first half, by his standards as both sides frustrated one another 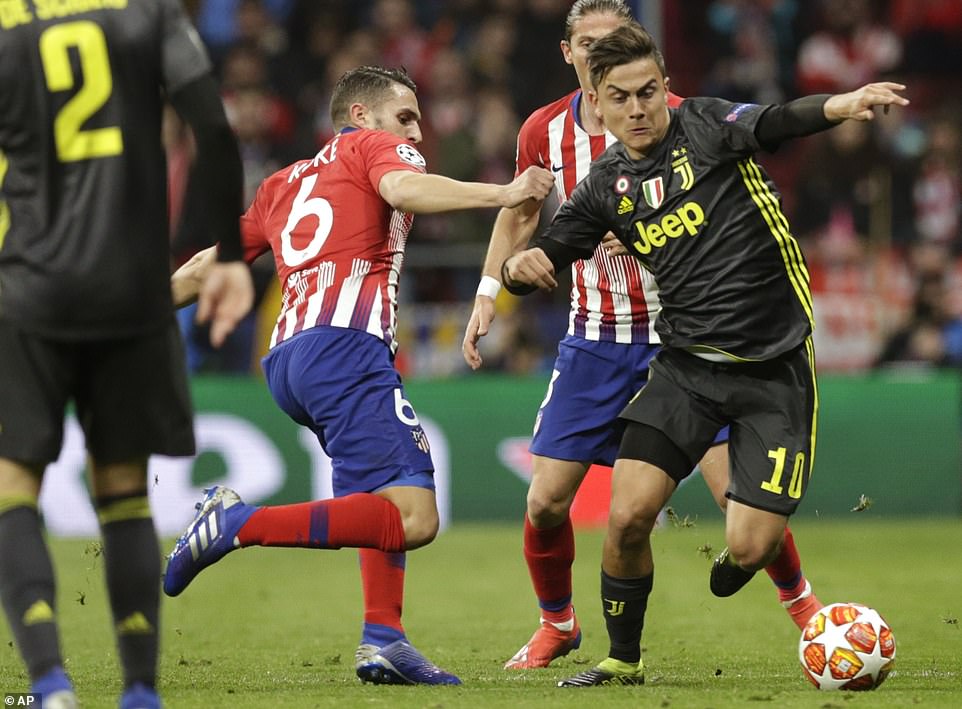 Like Griezmann for Atletico, Juventus star Paulo Dybala failed to wriggle free from the hosts’ tight-knit side 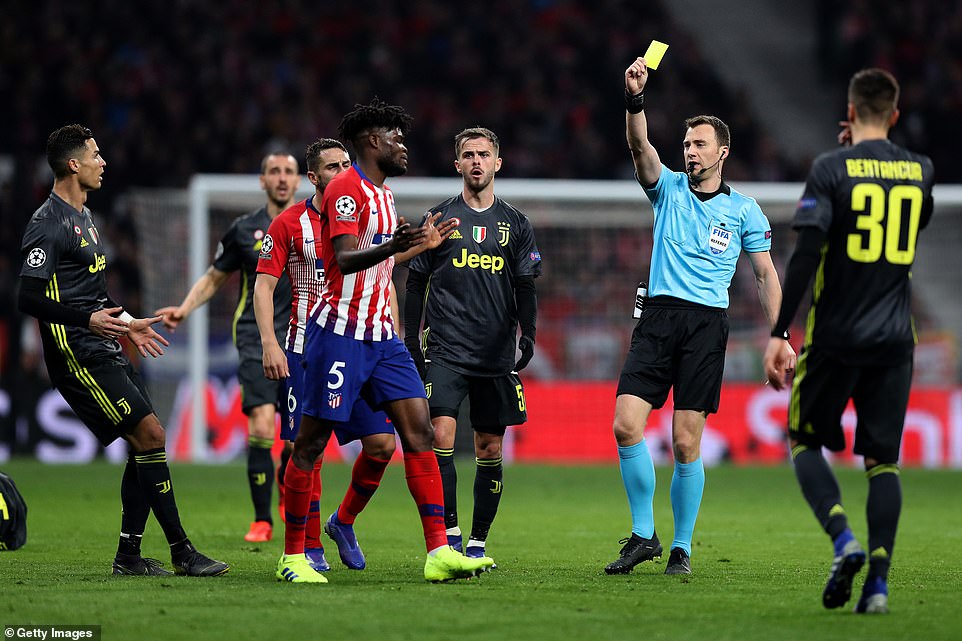 Like Costa, Thomas Partay will miss the second leg after being booked before half-time for a poor challenge on Dybala 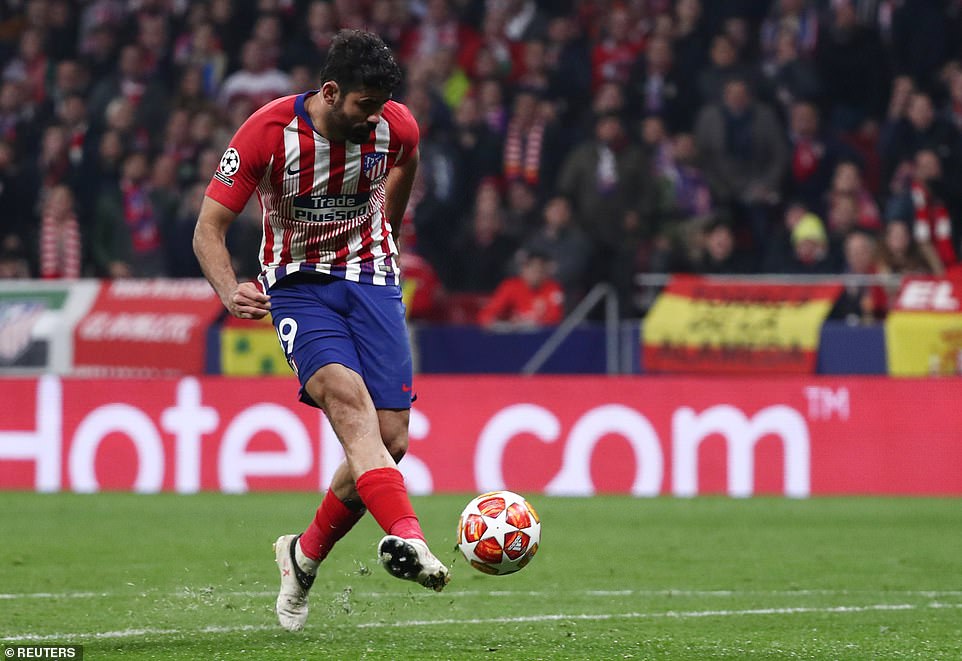 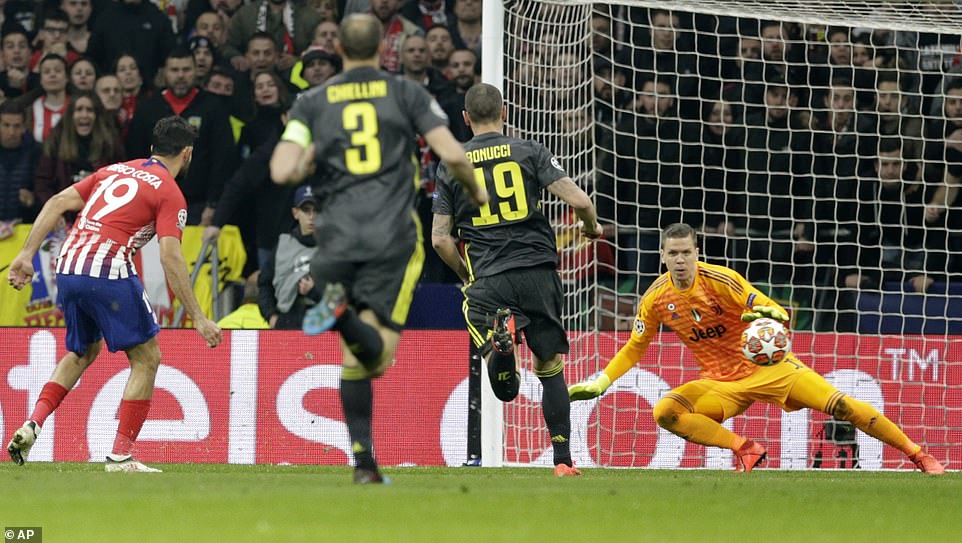 Having beaten Leonardo Bonucci in a foot race, the Spain international somehow fired well wide of the goal 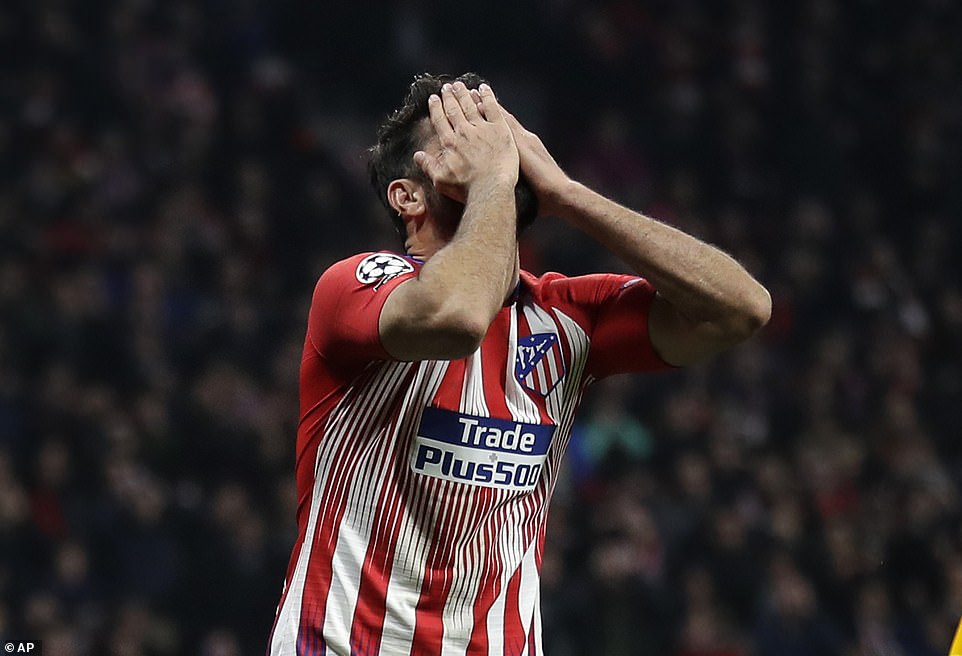 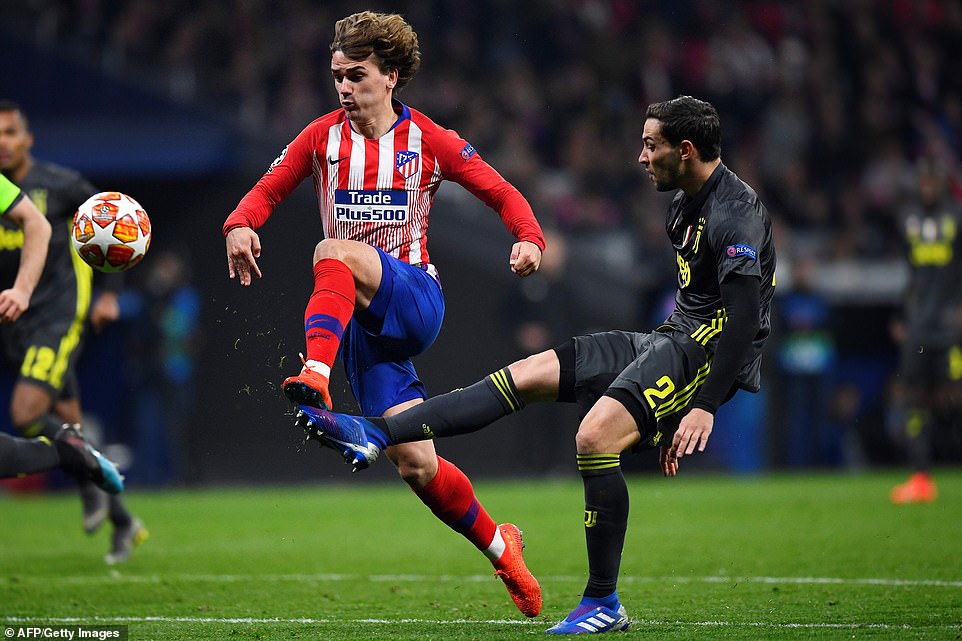 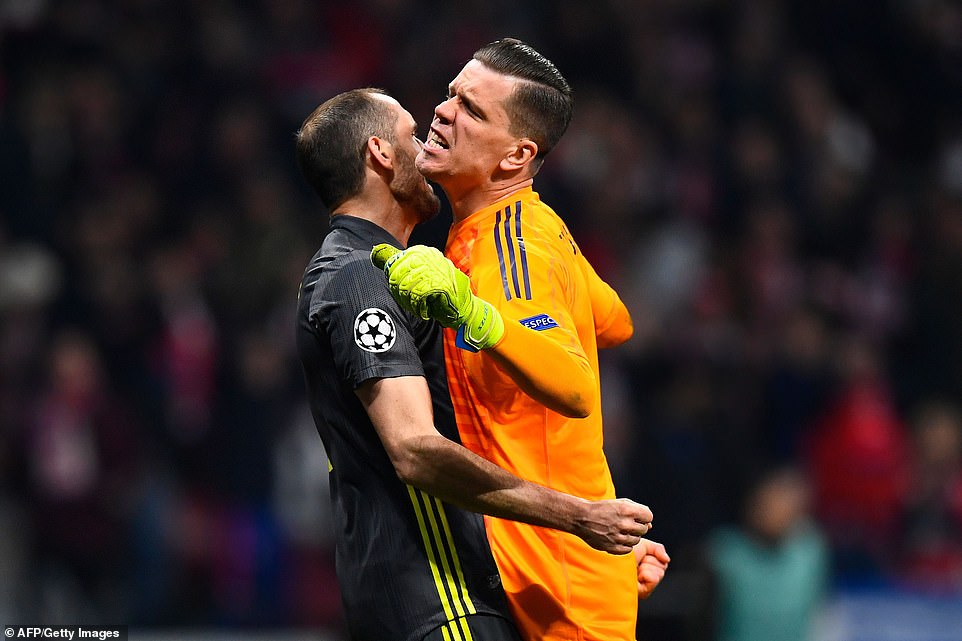 Costa reemerged for the second half. How long would he last in his first full game back for three months? He almost scored five minutes in running on to Griezmann’s superb pass and giving the chasing Giorgio Chiellini a push out of the way. He then pulled his shot wide and was still ruing the miss when Simone took him off and threw on Alvaro Morata.

Before that Griezmann was at the heart of the next near-thing. His lob under pressure from Chiellini was pushed on to his bar by Szczesny. Atletico seemed closer than ever to taking the lead. When it looked as if they had VAR ruined the moment for the home support again.

Filipe Luis crossed from the left and Morata’s bullet header left Szczesny with no chance.

The on loan Chelsea’s striker’s celebration seemed oddly subdued. He did run to the Atletico supporters behind the goal but before he was back on the pitch referee Zwayer had put his finger to his ear and was being told to review the goal. When he did he spotted Morata’s hand into the back of Chiellini and ruled out the goal.

That’s the trouble with VAR, it sees almost everything and it isn’t swayed by the wall of noise from a passionate home support. But when there is nothing to see it has nothing to say. Gimenez’ goal stood and when Godin’s shot from another ball launched into the area hit Ronaldo and continued into the net Atletico could this time celebrate without waiting for a VAR decision – they are 90 minutes from the quarter-finals. 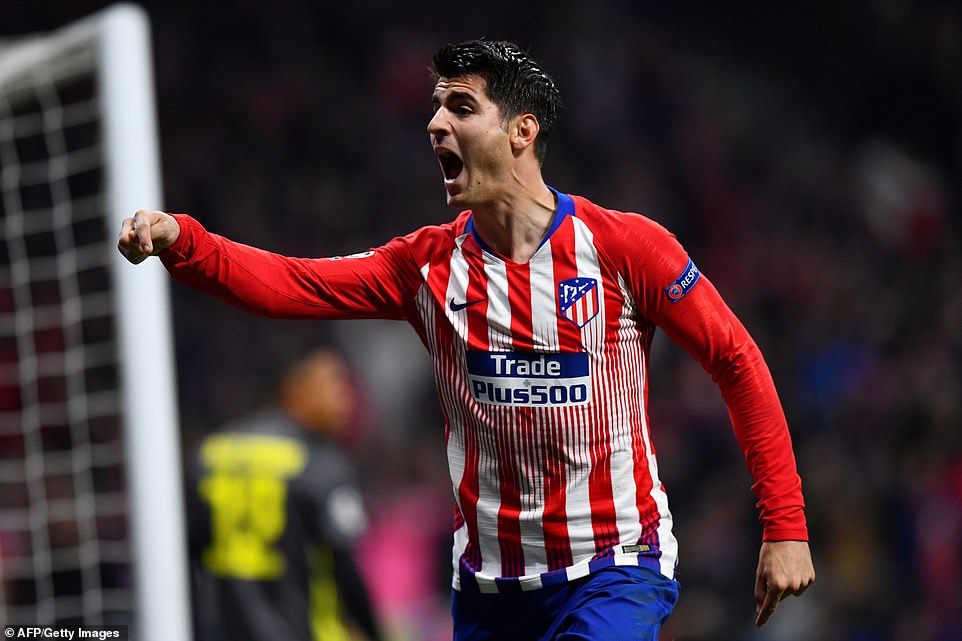 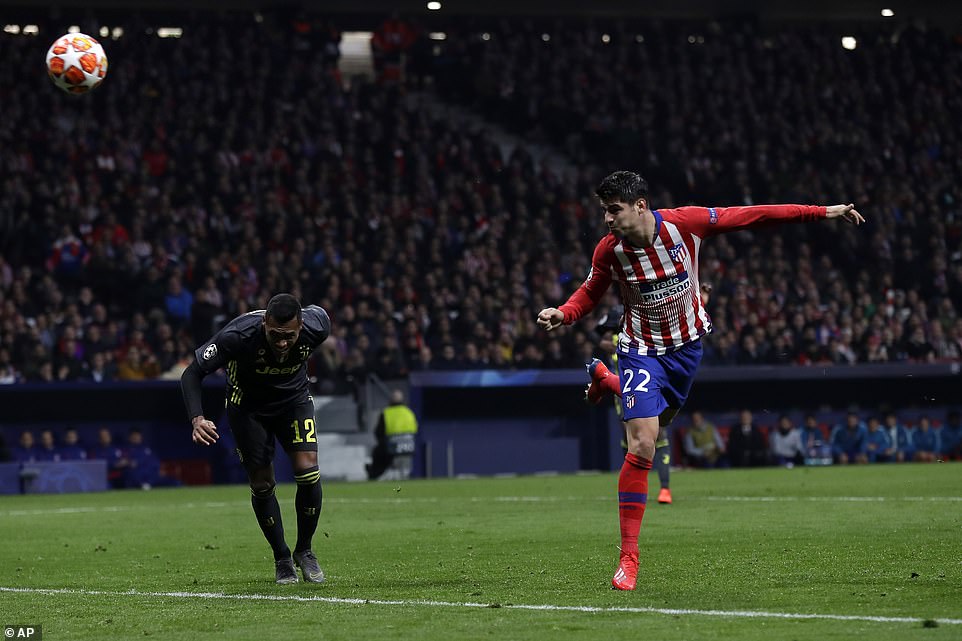 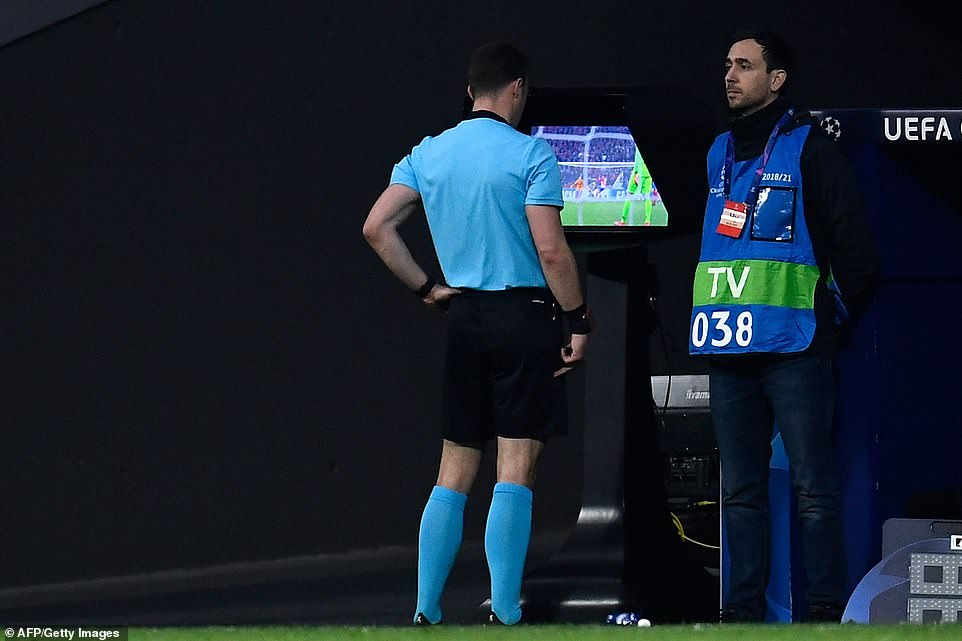 However, Zwayer reviewed the incident after the striker was flagged for an alleged foul on Giorgio Chiellini 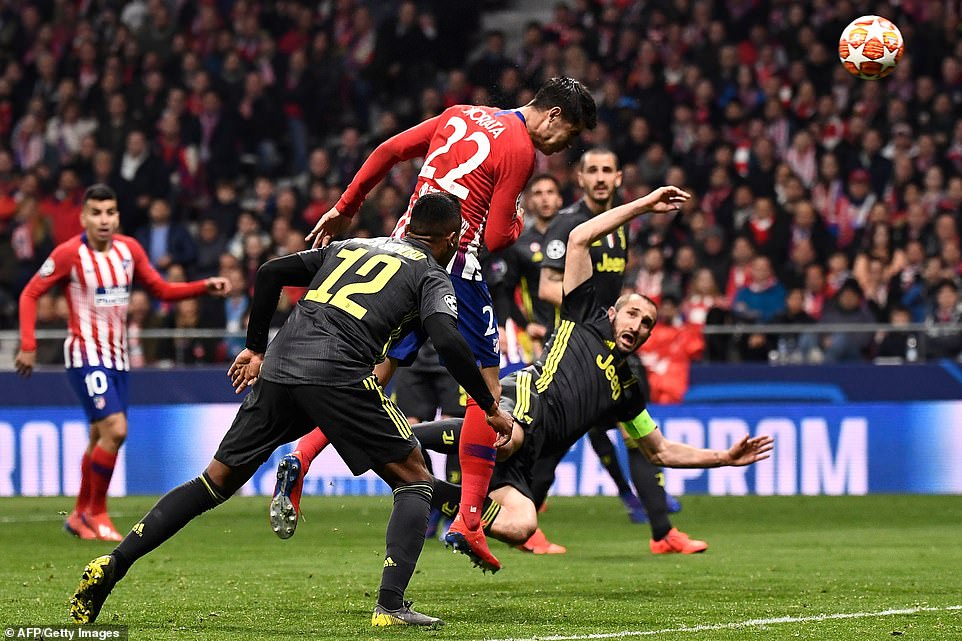 After reviewing the incident, the German referee did decide that Morata had pushed Chiellini (right) en route to scoring 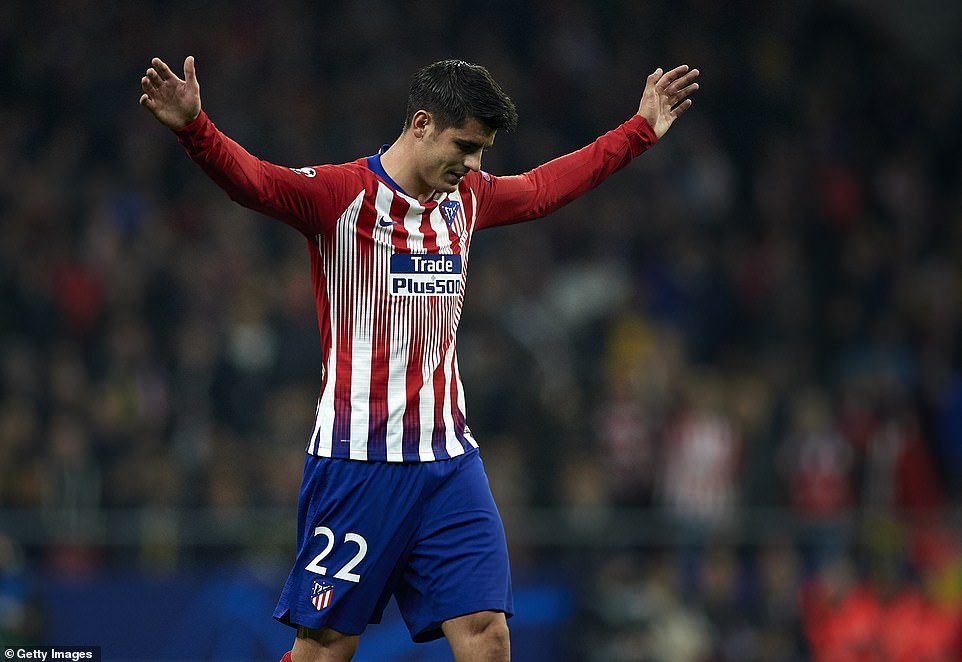 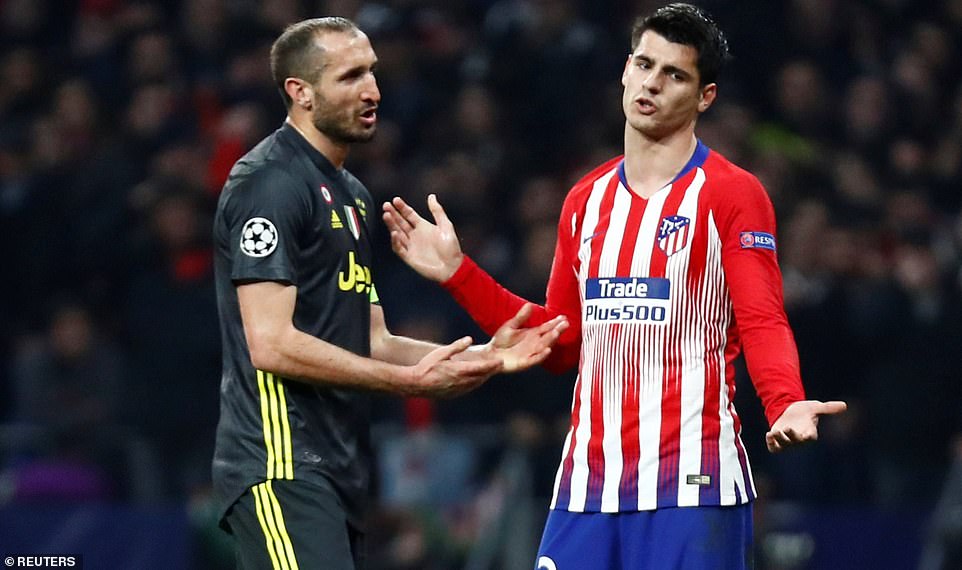