Simeone turned towards fans and grabbed his crotch after Jose Maria Gimenez opened the scoring in a 2-0 win on February 20.

The fine will be a drop in the ocean for the Argentine who is the world’s best-paid manager having signed a new contract worth more than £20million-a-year.

Simeone recently signed a new deal to tie him to the club until 2022, ensuring he earns more than any of Atletico’s players.

Explaining his celebration, Simeone said after the game: ‘I did it as a player in Lazio against Bologna and I did it again to show our fans that we have cojones.

‘It wasn’t aimed at the other team, I was turning towards our own supporters.

‘It’s not a nice gesture, I admit, but I felt the need to do it. It was such a tough game, we fought so hard and Diego Costa worked really hard when he wasn’t 100 per cent fit.

‘To put in Costa and Koke after so long out you must have balls. 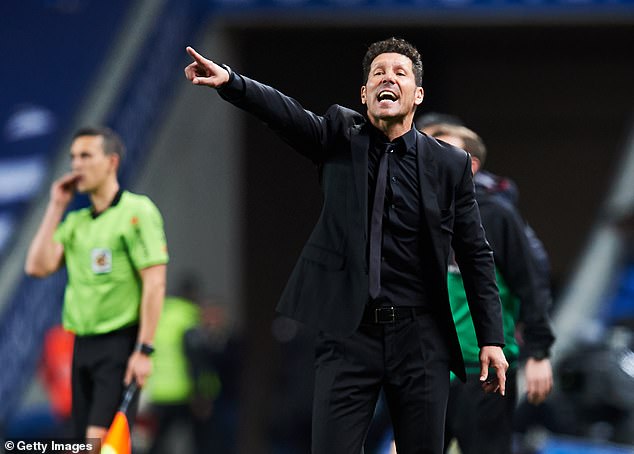 ‘I had to show what I was feeling. I can only apologise if anyone was offended, but I did it from the heart.’

Atletico have also been fined 38,000 euro (£32,000) after their fans threw objects and blocked stairways at Wanda Metropolitano.

Juventus have been fined 30,000 (£27,000) and manager Massimiliano Allegri warned after his players arrived late for the kick-off.