Dramatic moment Australian woman, 35, is bundled into the back of a van and tied up by a gang of kidnappers in Turin

A gang of kidnappers bundled an Australian woman into the back of a van in what police believe could have been a case of mistaken identity.

The thugs are understood to have been trying to recover 50,000 euros lost in a currency exchange scam before the ordeal unfolded in Turin, in northern Italy, on Wednesday.

Police say the men were dressed in bullet proof vests and carried knives and handcuffs.

A gang of kidnappers bundled an Australian woman into the back of a van in what police believe could have been a case of mistaken identity (pictured, CCTV footage showing the ensuing arrest at a parking lot)

‘All things that suggest intentions that are not at all positive,’ Turin Flying Squad police unit’s Marco Martino told La La Repubblica newspaper.

Handheld footage from an unknown source showed the 35-year-old woman being pushed into the black Volkswagen van.

The woman screams as horrified bystanders watch on.

The kidnappers are understood to have also attempted to abduct her male companion, though he managed to break free and call for help.

The van managed to speed off before the kidnappers pulled the vehicle into a parking lot.

Eventually police arrived on scene and rescued the woman who was found with her hands tied.

CCTV footage shows officers entering a building on the premises before walking out with the three suspects.

Foreign media reported one of the men arrested was a German who was given 50,000 in fake euro notes while in the city of Milan in June. 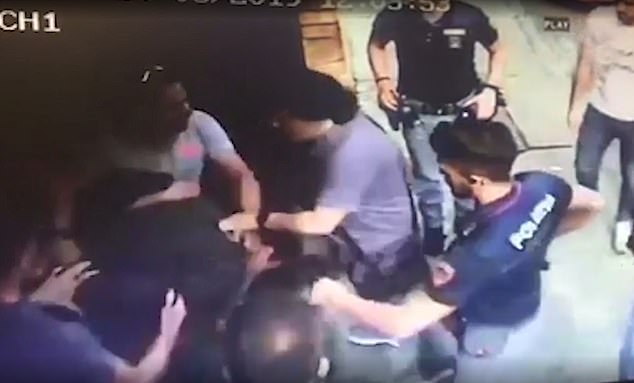