Fancy a touch of Florida or Tuscany without flying? Although we all miss the freedom to go abroad easily there are plenty of good reasons why we’re not buying many overseas holiday homes.

The poor exchange rate of recent years means foreign homes are more expensive now, while there are worries about further coronavirus waves and unpredictable local lockdowns around the world.

And, for those with an eco-­conscience, there’s the air travel contribution to global warming and air pollution, too.

No need to fly: A home in Kingswear, Devon, is the perfect base for sailing

But if you dream of a holiday home at a favourite foreign location, you might be able to recreate it to some extent in Blighty. Here are four easy-to-reach no-quarantine alternatives.

South Devon instead of the South of France

Sailing, sunshine and sand are the order of the day in both locations but the British West Country wins out for many.

‘Salcombe, Dartmouth and Brixham are the top-line attractions,’ according to Grace Jepson, of Stacks Property Search (stacks.co.uk), a buying agency, but she says people soon look at less well-known spots like Thurlestone, Kingswear and Hope Cove when they discover their beauty. ‘Villages on the Dart estuary such as Dittisham, Cornworthy and Stoke Gabriel offer waterside living but a quieter pace of life,’ she adds.

The Lake District instead of Tuscany

The National Park in Cumbria is just a tenth of the size of the Italian region but both have natural beauty, hills and farming traditions. Tuscany has truffles and pasta but L’Enclume in the Lake District village of Cartmel is the best restaurant in Britain, says the Good Food Guide.

Homes in the area are competitively priced compared to southern England. Zoopla (zoopla.co.uk) says a typical Ambleside home, for example, is just £383,000.

The Cotswolds instead of The Hamptons

If the Hamptons is the preferred holiday home location for New ­Yorkers, so the Cotswolds is for Londoners.

Just like Beyonce, Jay-Z, Julianne Moore and Alec Baldwin have their Hamptons boltholes, the Beckhams, Jeremy ­Clarkson, Zara Phillips and Kate Moss have homes in the Cotswolds.

Draws in the area, for celebs and the rest of us, include the Daylesford farmshop empire near Moreton-in-Marsh and Soho Farmhouse, the Oxfordshire country hangout run by the people behind Soho House private club in London

‘Any good Cotswolds village within 20 miles or so of a railway station is popular. The villages around Kingham, Charlbury and Kemble are particularly sought after,’ according to Damian Gray, at estate agent Knight Frank (knightfrank.co.uk).

Zoopla’s data shows property in trendy Kingham costs £581,000 on average; in more affordable Banbury, which has the fastest commuter train link to London, the typical price is only £302,000.

Sandbanks instead of Florida

Loud shirts and louder shorts, along with watersports and good seafood, are as plentiful in this part of Dorset as in Miami.

Rick Stein has a restaurant here with Harry Redknapp a regular customer, while the harbour at nearby Poole is home to yacht clubs and marinas, and borders a World Heritage coastline. 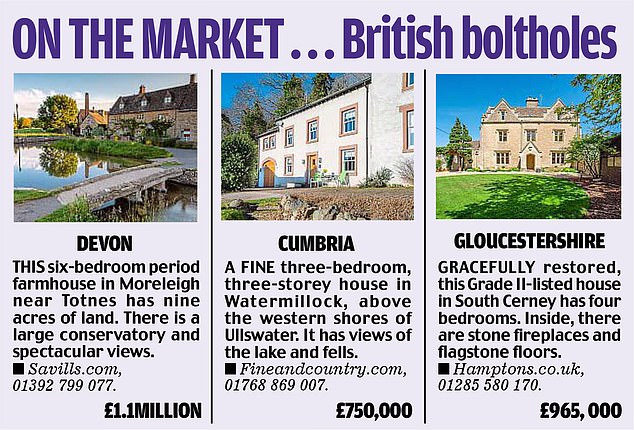 The equivalent of the Florida Keys is the Luscombe Valley Nature Reserve.

Homes are as blingy as you would find Stateside, too. Round Island, a 15-acre wildlife haven just off the shore of the Arne peninsula, has three newly built houses on sale through agency Savills (savills.com) priced up to £5.95million. Or you can live the Sandbanks lifestyle for an average £1.32million, says Zoopla.