Pierre-Emerick Aubameyang was branded ‘unbelievable’ after his first hat-trick for Arsenal fired them into the Europa League final, where they will face Chelsea in Baku.

Aubameyang’s treble helped Arsenal to a 4-2 victory over Valencia and guided Unai Emery’s side into their first European final since 2006 in the Champions League.

There was a hostile atmosphere at the Mestalla on Thursday night and Mesut Ozil reacted by shushing the home supporters as he slowly walked off after being substituted. 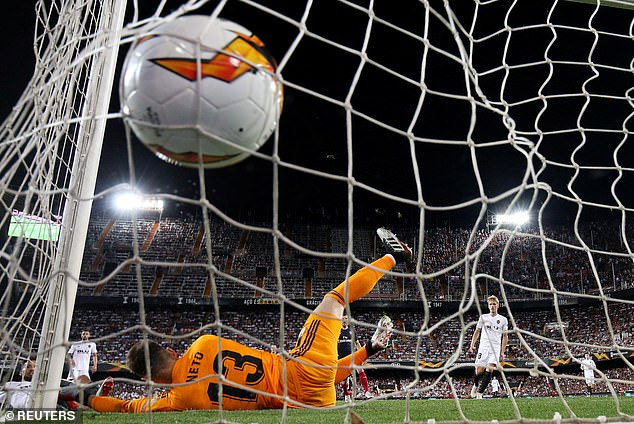 Tensions also boiled over at full-time as both sets of players squared up to one another.

Despite that, Arsenal emerged victorious and Lacazette lavished high praise on his strike partner at full-time: ‘Auba was unbelievable with an incredible hat-trick.

‘Thanks to him. We have played badly in Premier League during the last month and now we have to use this opportunity. We want to play in the Champions League next season and we want the trophy. We reacted well to going behind and we knew we had to score a minimum of one goal.’ 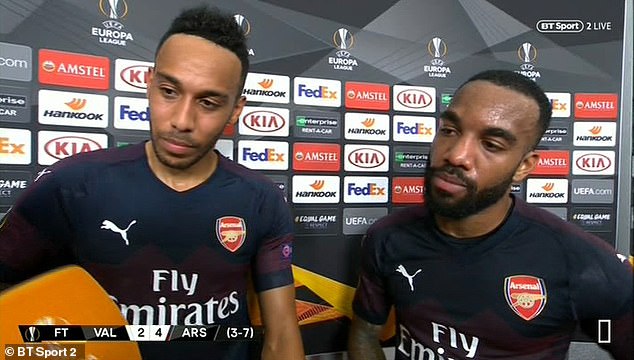 Speaking after the game, Aubameyang and Alexandre Lacazette hailed the size of the result

Hat-trick hero Aubameyang added: ‘We have learned from last season and this year we didn’t make the same mistakes. Now we are through to the final.’

Emery, who managed Valencia for four years, won the Europa League three times with Sevilla and is now looking to lift the trophy for a fourth time.

He was set the task of qualifying for the Champions League when appointed at the start of the season and winning Europe’s secondary competition is Arsenal’s last chance.

‘We had two possibilities (to qualify for the Champions League) – the Premier League we lost, now we are in the Europa League,’ Emery said. ‘The Europa League has improved a lot.

‘I started playing in it here with Valencia 10, 11 years ago. It was different, very different. Now this is a different league. Manchester United won it. Sevilla played the final with Liverpool.

‘This possibility (in the Europa League), after the Premier League was lost, we took a strong stance in our mind to prepare, to focus, to work hard to take this feeling. 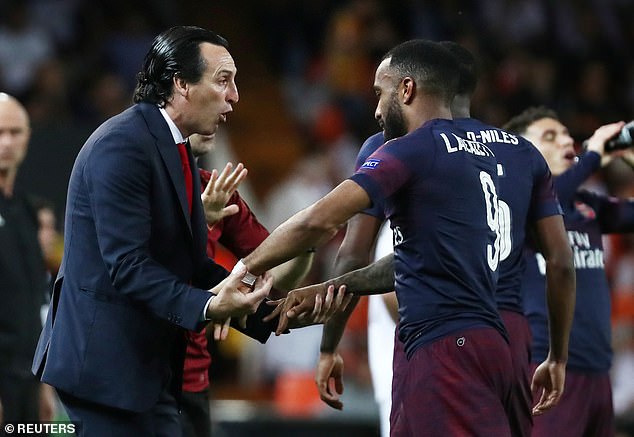 ‘We can be proud of the players, of the work, of our supporters. It’s not finished. We have one step more to play in the final. We are happy but we know it will be difficult to win.

‘I am very proud of the players, the supporters here with us. I think we deserve it. The Europa League is one way to the Champions League.’

On his strikers, Aubameyang and Lacazette, who have scored 29 and 19 goals in all competitions this season, Emery continued: ‘I am proud. Big players can be good strikers but when their commitment is like today, defensively also, to work to help us, it is amazing.’