Aubameyang is bad boy bringing his supercars to Arsenal

Arsenal have agreed a club-record fee of £55.4million with Borussia Dortmund for striker Pierre-Emerick Aubameyang.

The Gabon international, who has been the subject of intense interest this month from the Gunners, is also set to be the club’s highest-paid player.

Arsenal have offered Aubameyang a three-and-a-half-year contract worth £180,000 a week as they look to bolster their attacking options.

Sportsmail’s Bundesliga expert Kit Holden reveals all about the 28-year-old.

Arsenal have agreed a club-record fee of £55.4million with Borussia Dortmund for the striker

What are Arsenal getting for their money?

Having come through the ranks at AC Milan, Pierre-Emerick Aubameyang impressed at Saint-Etienne before making his name at Dortmund.

Arriving in Germany in 2013 for £12million, the striker initially played second fiddle to Robert Lewandowski, but became the main man when the Poland striker moved to Bayern Munich a year later.

Armed with astonishing pace — rumour has it that he is faster over 30 metres than Usain Bolt — and canny movement, he has scored 141 goals in 212 appearances for Dortmund.

He is an instinctive finisher and was the top scorer in Germany last season with 31 goals. He has hit 13 this term, but is heavily reliant on good service. 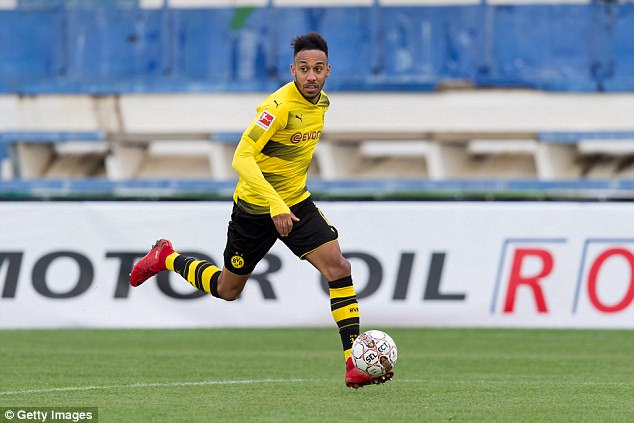 His intelligent positioning and sharp movement make him difficult to play against. Left to his own devices, however, he has his limitations. He lacks the incision to create chances for himself, and often fluffs his lines in one-on-one situations.

If there is any good time to sign him, however, it is now.

Aubameyang is arguably at his peak, and though he is a rung or two short of being world class, he is likely to remain one of Europe’s most prolific strikers over the next few seasons.

Aubameyang often celebrates goals with a somersault, while his love of superheroes has also seen him don Spider-Man and Batman masks after scoring.

When things are going well this is part of Aubameyang’s appeal but when times are bad his extravagances are seen as further proof of his chronic lack of discipline, selfishness and vanity. As his recent indiscretions have built up, it is the latter view of Aubameyang which has prevailed. 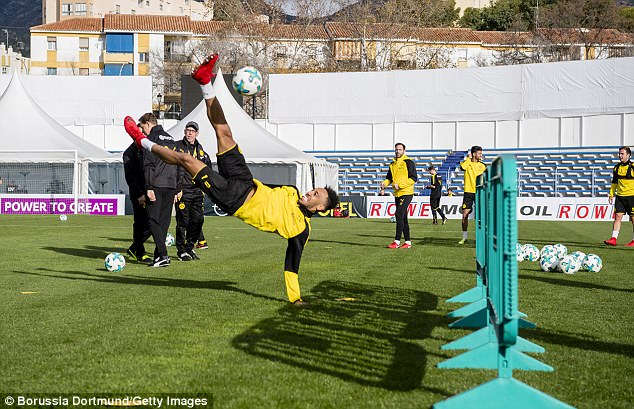 So he’s something of a show-off, then?

You could say that. ‘No Auba, no party,’ the striker has said in the past. Aubameyang is known as quite a showman, with a penchant for fast cars, extravagant haircuts and flashy clothes.

His somewhat daring fashion sense is not just a cry for attention, but a passion. His PEA17 clothing brand is a business venture which has recently taken off. The Gabon forward’s brand, complete with an ‘A-bolt’ logo, in conjunction with Nike, has been showcased on Instagram.

And it’s not simply a case of putting his brand on the clothing, Aubameyang has shown a keen eye for design. Last summer he teamed up with the clothing brand New Era to design a baseball cap. Retailing at £30, it features Dortmund’s black and yellow colours — will next year’s edition be the red and white of the Gunners? 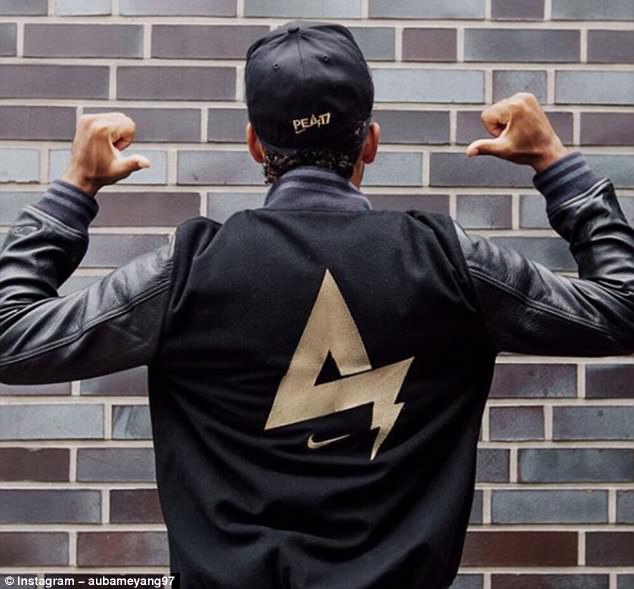 He has also made a music video. The song name? Aubameyang, of course.

If his fashion range and music endeavours are still not fulfilling the extravagance criteria, then perhaps supercars might.

Aubameyang’s £170,000-a-week salary in Germany afforded him the luxury of splashing out on little treats every now and then. He flaunted his customised metallic £250,000 Lamborghini Aventador.

Once again, note the A-bolt branding across the front. Very understated. 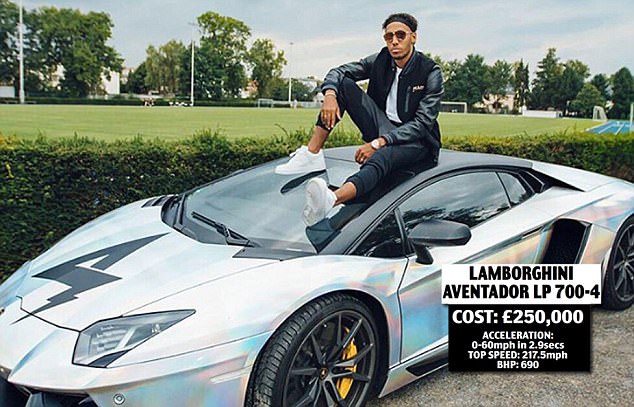 Speaking of understated, at Saint-Etienne in 2012, he showed off a pair of green Nike boots encrusted with 4,000 Swarovski crystals worth £2,500.

He sported a similar pair, this time with the yellow and black, ahead of Dortmund’s derby with Schalke in 2016 and has even worn a pair of Batman-inspired boots.

Off the pitch, it’s a family affair. His son, Curtys, had his own personalised black and yellow Batman shoes, complete with Aubameyang’s No 17. 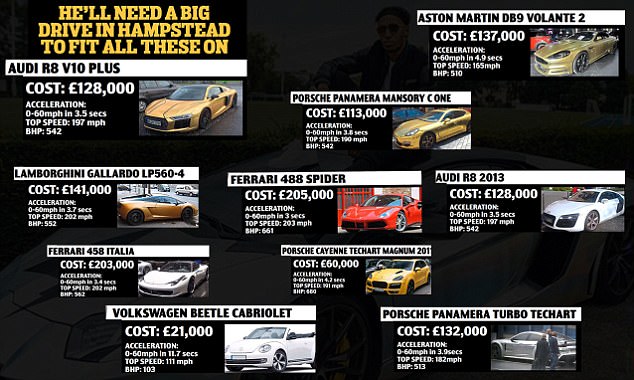 BUT does he REALLY deserve his bad boy image?

Much is made of his extravagance, perhaps unfairly at times, but it has been increasingly hard to defend him in the last year or so.

He has openly pushed for a move away from Dortmund, telling fans and journalists about his desire to move to Real Madrid, AC Milan or Paris Saint-Germain.

Further indiscretions include an unauthorised overseas trip on the eve of a league fixture, inviting a Red-Bull sponsored football freestyler to Dortmund’s training ground for a film shoot without permission, and repeatedly arriving late to training. 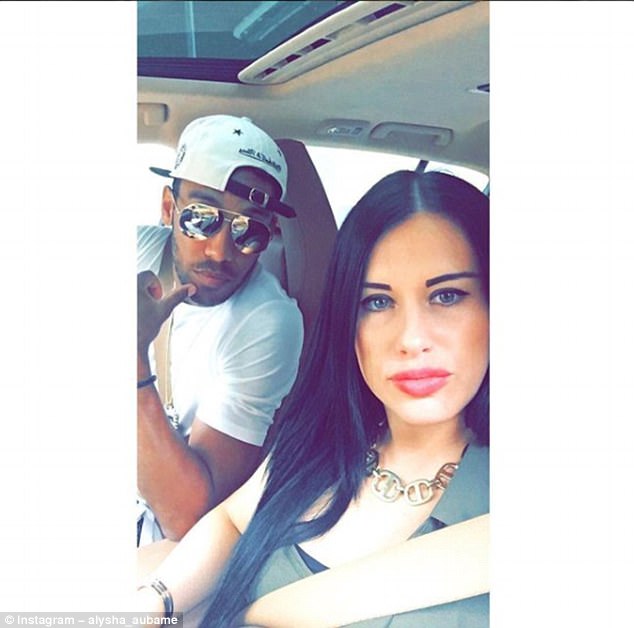 Aubameyang, pictured with his girlfriend Alysha Behague, has openly moved for a move away

Aubameyang’s consistent disregard for club rules has exasperated his bosses, and bred resentment among his team-mates, who feel he is given special treatment.

Possibly the area of his life which has landed him in the most hot water, however, is his love of hitting the town.

He was suspended for Dortmund’s Champions League tie against Sporting Lisbon last season after he attended a pool party in northern Italy just 48 hours before the clash.

There were also reports he was omitted from Dortmund’s squad to face Stuttgart last November after he made a trip to Barcelona to see former team-mate Ousmane Dembele. The club cited ‘disciplinary reasons’. 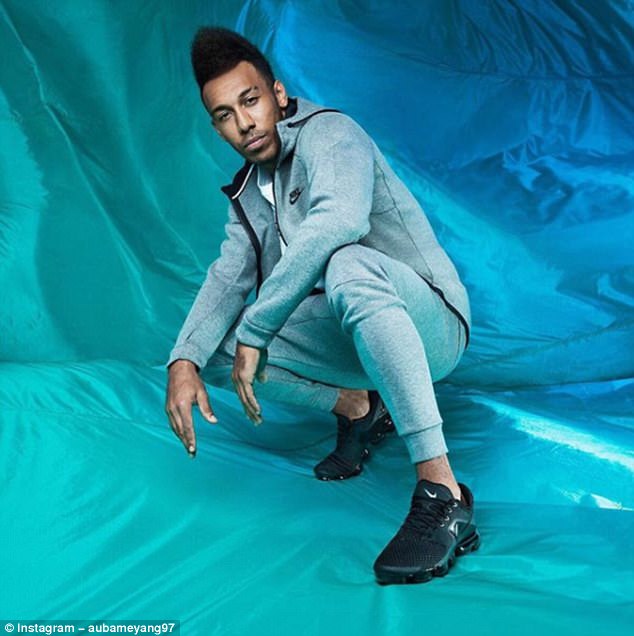 Known as quite a showman, with a penchant for fast cars, extravagant haircuts and clothes

Sounds like Dortmund won’t be sad to see him go then?

The relationship between club and player appeared to have deteriorated beyond repair. Sporting director Michael Zorc and coach Peter Stoger expressed exasperation with his behaviour.

On the other hand, Dortmund know only too well how heavily reliant they were on Aubameyang and his goals.

Their dramatic collapse under former manager Peter Bosz in the autumn coincided with a goal drought for the 28-year-old.

A section of Dortmund fans had also had enough of the flirtations with other clubs, the constant disregard for internal rules and the clashes with the club’s hierarchy.

Former Germany and Dortmund star Matthias Sammer has warned Arsenal that ‘a rotten apple’ doesn’t suddenly change when he goes to a different club. 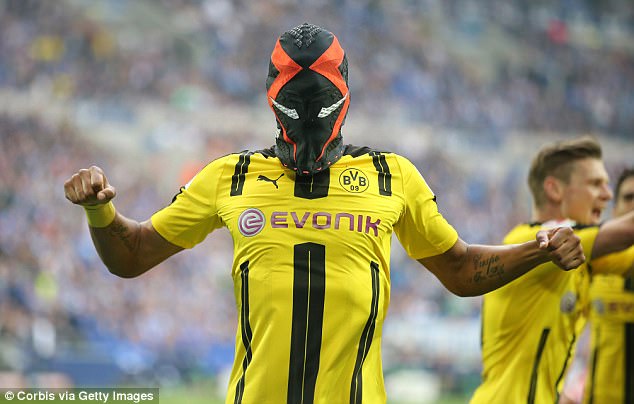