‘The true face of measles’: Wife’s desperate plea after her healthy husband is struck down with the deadly disease and is left fighting for life despite thinking he was immunised

A woman is pleading with people to check their immunisation records after her husband contracted a deadly strain of measles despite believing he was protected.

The mother-of-three, who chose to remain anonymous, said he is now recovering in Auckland Hospital.

The 45-year-old father was diagnosed with measles encephalitis, which is swelling on the brain.

Doctors are unable to treat the condition and his body will have to fight the virus on its own.

The 45-year-old father was diagnosed with measles encephalitis, which is swelling on the brain

The woman described the ordeal as a ‘waiting game’.

‘Once the brain is infected they have no tools and have to rely on the virus leaving the body before brain damage,’ her friend explained to friends and family on Facebook.

The man’s wife said she wanted to share his story to raise awareness about the necessity of vaccinations.

WHAT IS MEASLES ENCEPHALITIS?

Encephalatis is swelling of the brain, and can occur during the rash phase of the illness.

It is a rare complication which affects about 1 in every 1,000 cases of measles.

About 15 per cent of those cases die, while one third are left with permanent brain damage.

‘This is the true face of measles,’ she wrote.

‘This is my husband… he is 45. Strong, healthy and physically fit.’

She went on to say that the ‘horrific virus’ would have catastrophic effects on a person whose immune system was compromised.

‘This virus is horrific. If it can do this to a fit 45-year-old male I can’t imagine how a child or baby would cope.’

The man was infected nine days ago, despite believing he had been vaccinated as a child.

His wife urged everybody to double check their immunisation records and to head straight to the doctor to receive the shot if they hadn’t already.

‘If just one person sees this and is motivated to get immunised then it helps someone, somewhere,’ she said.

Since the initial post, which has been shared almost 9,000 times, the woman’s husband appears to be slightly improving.

She said she saw ‘his first smile in 10 days’ and that her family was ‘feeling blessed with the power of love.’

But they acknowledge there is still a long road ahead as his body attempts to fight off the subsequent infection on its own. 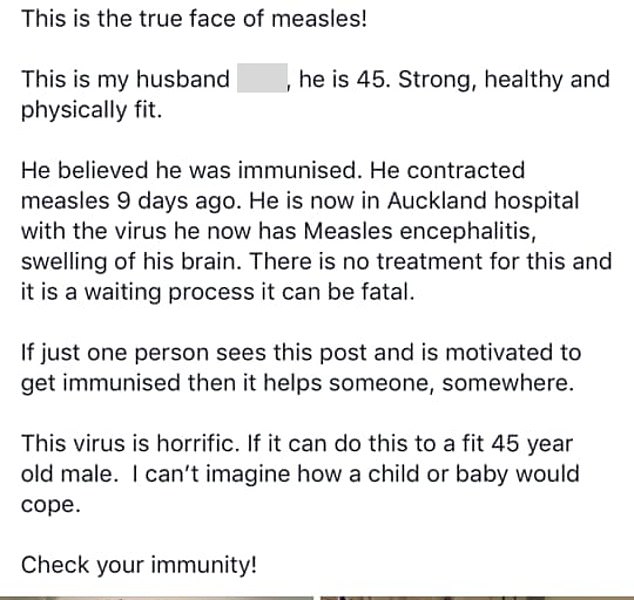 Since the initial post, which has been shared almost 9,000 times, the woman’s husband appears to be slightly improving