An Asian immigrant has claimed an Auckland bus driver has discriminated against her and repeatedly refused to let her on board.

Bomi Kim, who is pregnant and has two young children, said she was trying to board the bus last week to take her son to the hospital but the driver refused to open the doors, according to the NZ Herald.

Ms Kim filmed herself knocking on the doors as the driver appeared to ignore her. Her son can be seen peering through the glass doors.

The mother-of-two, who doesn’t have a driver’s license and uses the bus for transportation, told the publication she has had several run-ins with the same driver, forcing her to cancel important appointments.

Ms Kim claims the driver has been repeatedly rude to Asian passengers and she believes she was racially discriminated against.

‘If I were a good, white English speaker, would the bus driver sit in the driver’s seat and open the door, and see me and mock me?’ she told the NZ Herald.

‘I think it’s like the personality of the bus driver. New Zealand is a country of immigrants, and I will not pass on this fact that there are still white people with white supremacy.’

Ms Kim said she believes the most recent incident stems from an initial argument with the driver on February 24. 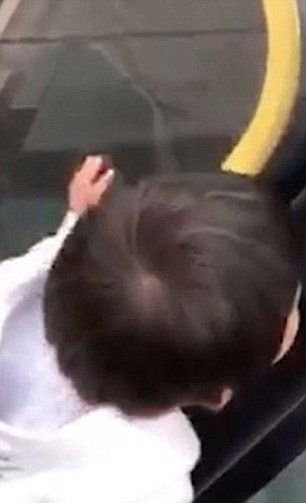 She said she boarded the bus with a pram and sat on the right hand side where there is reserved seating, but the driver ordered her to move to the left hand side of the bus.

‘I told the bus driver “the right seat is more secure for the baby. Can I sit on the right side?”. But the bus driver told me: “I am the driver of this bus” and if I didn’t move left to “get off the bus right now”,’ she said.

Auckland Transport told the publication the driver in question is being investigated by the bus company, Pavlovich Transport Solutions.

Pavlovich Transport Solutions did not immediately respond to requests for comment.