The extraordinary story of a British First World War captain who became an unlikely cult hero as he fought the communist Bolsheviks during the Russian Civil War has come to light after his medals and photographs sold for £7,500.

Captain William Richardson was flung into the conflict along with other Allied war veterans after troops were sent to Russia in support of the Imperial White Army in the wake of the communist revolution.

British forces, as well as other Allied troops from France, U.S and Japan, had been sent to join the fight against the Bolshevik Red Army in 1918 in a bid to re-establish the Eastern Front.

The collection of images and medals belonging to Captain William Richardson, pictured in traditional Russian clothing, told the story of his involvement in the Russian Civil War, fighting alongside the White Army against the communist Bolsheviks before his death in 1920, aged 37 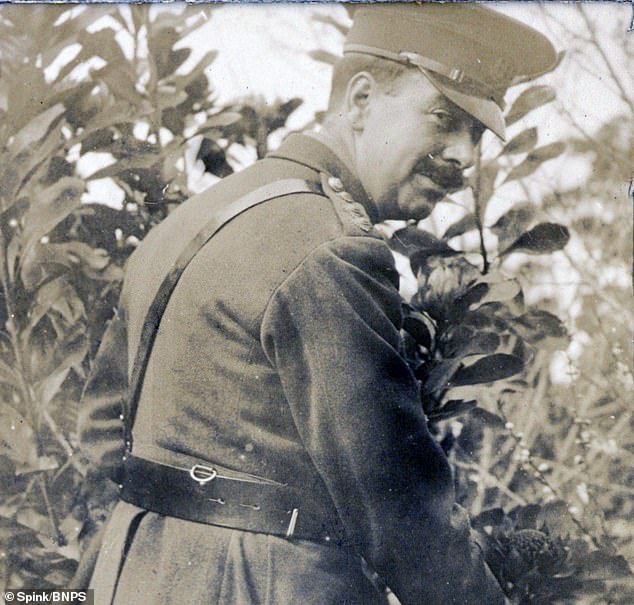 Richardson was 31 when the war broke out, serving for two years in Borneo and Hong Kong before joining the fight in Russia in 1918 after Allied forces were forced to intervene in a bid to prevent the spread of communism

The incredible collection of photographs  documenting the Birmingham-born soldier’s time in the conflict show him adopting the Russian military lifestyle wearing a traditional Russian hat and a large fur coat.

Captain Richardson was lauded by the anti-communist Cossacks, who sometimes fought independently and sometimes as a faction of the White Army, and decorated him for his outstanding service to their cause.

The war hero served in southern Russia and earned the respect of the locals for helping to train and equip their soldiers.

When he died suddenly of pneumonia aged 37 in 1920 his death was mourned by the Cossacks and the residents of the area of the Black Sea port of Novo Rossisk he helped defend.

His archive, which includes the Russian Imperial Order of St Anne and five photo albums containing images from his travels across the globe, sold at auction in London. 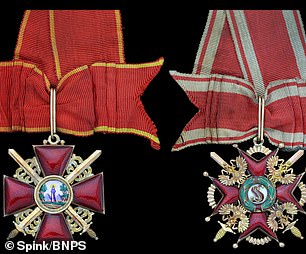 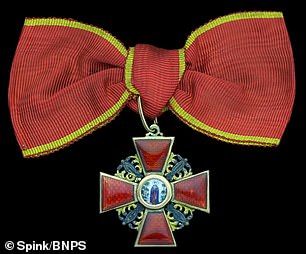 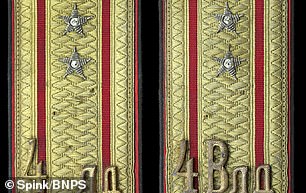 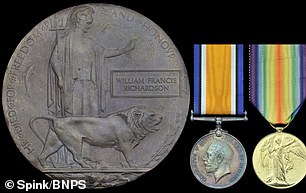 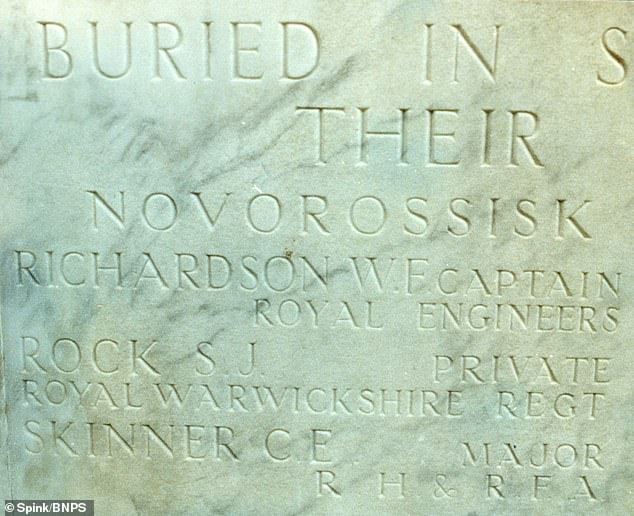 Why did Allied forces intervene in the Russian Civil War?

In November 1917 the Russian Civil War broke out as several factions fought for the power to determine the country’s political future.

The socialist Bolshevik party, led by Vladimir Lenin, had overthrown the provisional government as different groups battled for control.

The two largest groups involved in the fighting were the communist Red Army, and the White Army, which favoured capitalism and monarchism.

The White Army was a union of anti-Bolshevik groups, including peasant militias, the Black Army (Ukrainian anarchists) and other groups fighting for their state’s independence from the Russian Empire, led by Tsarist officers.

The war continued until June 1923 with 13 foreign nations joining the fight against the Red Army.

The countries were forced to get involved after the Bolsheviks pulled out of the world war in March 1918, signing the Treaty of Brest-Litovsk which saw them giving over territory to Germany.

In the peace deal, Ukraine, Georgia and Finland were granted independence from Russia, Poland, Lithuania, Latvia and Estonia were handed over to Germany and Austria-Hungary and Kars, Ardahan and Batum were given to Turkey.

The loss of territory weakened the Allied forces and they were forced to intervene in order to re-establish the Eastern Front.

The peace deal also left pro-Allied Czechoslovak Region stuck in Russia and opened up the opportunity for Germany to make use of Russian equipment.

As well as sending forces, the countries provided parts of the White Army with financial support in a bid to stop the spread of communism across Europe.

The intervention was relatively small, involving around 200,000 soldiers from across the globe.

A year after entering the fight, the French withdrew their troops in March and April 1919, closely followed by British soldiers leaving the Arkhangelsk and Murmansk areas in the autumn of that year. and South Russia in 1920.

In 1919 the Red Army had defeated the White Army in Ukraine and Serbia. Fighting continued in pockets for two years afterwards, including a battle in Crimea which saw the Civil War draw to a close in November 1920.

The war was eventually ended when the Bolsheviks assured communist control of the new Soviet Union in 1923.

The images include photos of Hong Kong during the First World War, where he served, and a huge crocodile he shot while he was stationed in Borneo in 1918.

A spokesman for auctioneers Spink and Son said: ‘The awards of Captain Richardson soared above their estimate of £2,800.

‘His remarkable photographic archive gave a unique insight into the final days of the Russian Empire and his career previous to that was action packed.’

The decorated veteran was aged 31 when the First World War broke out and joined the Royal Warwickshire Regiment before he was commissioned as an officer and transferred to the Middlesex Regiment. 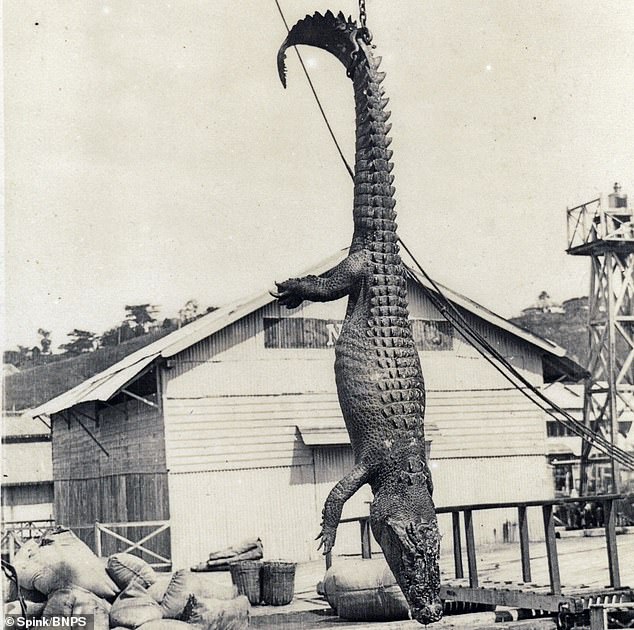 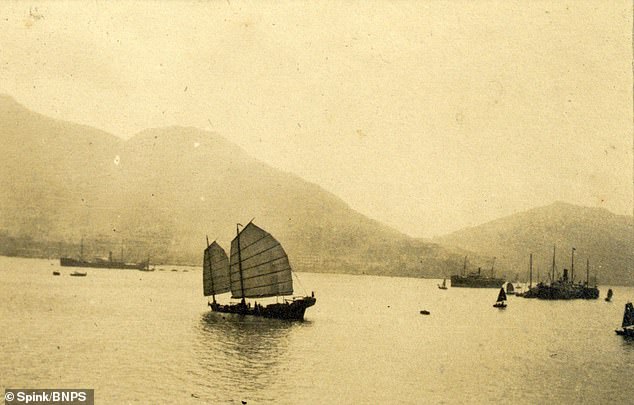 The war veteran took pictures of his travels which feature in the collection that sold for £7,500, including images of Hong Kong during the First World War

After the Allied intervention in Russia his battalion arrived at the city of Vladivostock in August 1918. He was wounded in 1919 and died the following year aged 37.

A letter sent to Capt Richardson’s widow also formed part of the archive that sold.

It was sent by Captain G. N. Wood of the 1st Battalion, Dorset Regiment who worked alongside Capt Richardson.

He wrote: ‘As a friend of Captain Richardson, I feel that I must write to you to express my very deepest sympathy in your great sorrow.

‘I first met Captain Richardson on the journey to Russia, and though our acquaintance was short, a very real friendship existed between us.

‘As I was the only other Englishman with him at the time of his illness, I can give you some particulars which you might be glad to know.

‘Your husband and I had been working together for a fortnight in the mountains, north of Novo Rossisk on the preparation of a line of defences.

‘The weather was extremely cold, and was probably the cause of his sudden illness. The Cossacks were most kind to him and did everything possible for him. 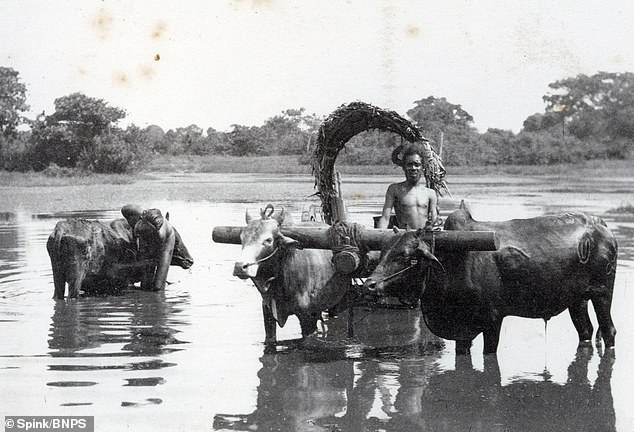 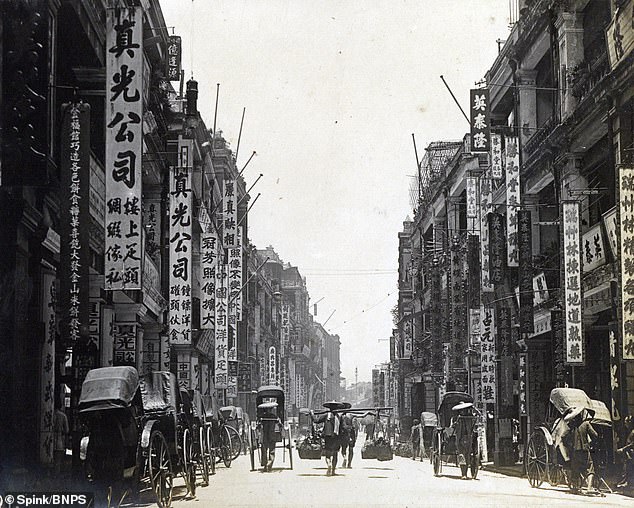 His photo archive was sold for thousands at an auction in London held by Spink and Son, including this image taken in Hong Kong

‘All the Russians with whom we were working, and the villagers, were most distressed at Capt. Richardson’s illness and I had many enquiries and expressions of sympathy from them.’

Before heading to Russia, Richardson had served for two years on the Western Front in the First World War.

In February 1917 he survived the sinking of a troopship bound for Hong Kong after it struck a German mine off South Africa.

The incident is best remembered for the stoicism of the 1,000 troops and 30 officers who waited patiently to be evacuated from the SS Tyndareus as it began sinking in heavy seas.

Before being rescued the men lined up for a roll call and sang ‘It’s a Long Way to Tipperary’ while they waited for help to arrive.

Every single man was saved and the rescue received praise from King George V.

After the Tyndareus incident, Capt Richardson was appointed provost-marshal of the detention barracks in Hong Kong. 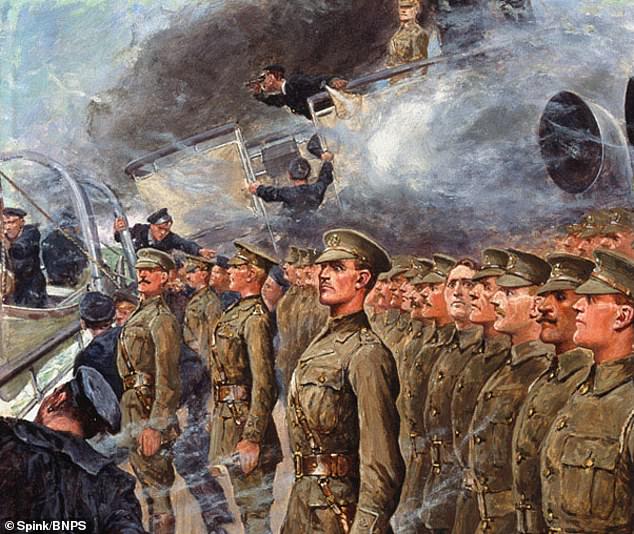 A depiction of the crew standing to attention, waiting to be rescued, as the SS Tyndareus, bound for Hong Kong, sunk in 1917