Bosses at German car firm Audi have today confirmed plans to phase-out petrol and diesel models, with a deadline of 2026 set for the release of its final vehicles with an internal combustion engine.

After that date the brand will cease development of fossil-fuelled cars and redirect attention to pure electrification.

By 2033, Audi says it will no longer offer petrol and diesel-engined models into its European showrooms – though it will continue to sell them in China.

Audi’s electric plans unveiled: The German car maker will sell only electric vehicles in Europe from 2033 – and schedule to wind-down petrol and diesel availability starts immediately

Audi became the latest in a host of car makers to outline their intentions to do away with the internal combustion engine over the course of the next decade, following the likes of Fiat, Ford, Jaguar Land Rover and Volvo, as well as exotic brands including Bentley and Lamborghini.

Like many rival manufacturers, Audi’s goal is to be net-zero carbon by 2050 – the same carbon-neutrality target set by parent group VW.

Part of this process will see the end of development of internal combustion engines come in five years’ time.

From 2026 there will be no investment into evolving its petrol and diesel offering and all models removed from sale some seven years later.

But while there won’t be any new engines coming to market, Audi says it will continue to build its existing fossil-fuelled powertrains for China, as the market is expected to continue growing after 2033. 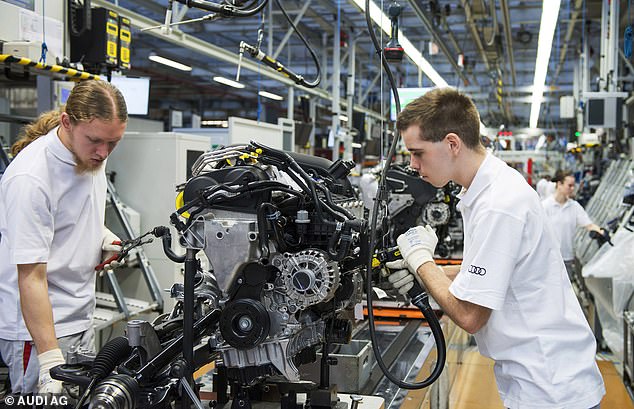 Audi said it will cease development of internal combustion engines from 2026. While petrol and diesel models will be removed from its European showrooms in 2033 it will continue to sell them to the Chinese market

For Europe, the schedule for winding-down availability of petrol and diesel models begins with immediate effect, as the German car maker plans to launch ‘more than 20’ electric ‘e-tron’-badged vehicles before 2025.

Its latest electric car, the e-tron GT, has received rave reviews and is, despite a high starting price of £79,900, experiencing high demand.

Already due to launch next year is the large Q6 e-tron SUV, while an electrified version of the A6 luxury saloon is also due in 2023. 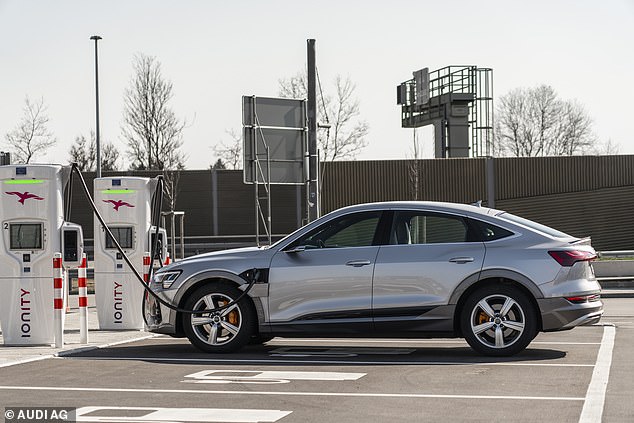 Audi plans to launch ‘more than 20’ electric ‘e-tron’-badged vehicles before 2025, joining the existing range which already includes the e-tron GT sports car and this e-tron SUV

Speaking at the Climate Neutrality Foundation conference on Wednesday, CEO Markus Duesmann said: ‘Audi is ready to make its decisive and powerful move into the electric age.

‘Through our innovative strength, we offer individuals sustainable and carbon-neutral mobility options.’

Audi believes that the exact timing of the combustion engine’s discontinuation will ‘ultimately be decided by customers and legislation’ combined.

‘With this roadmap, we are creating the clarity necessary to make a decisive and powerful transition to the electric age. We’re sending the signal that Audi is ready,’ the Audi boss continued.

And in something of a two-finger salute to law makers, Duesmann added: ‘Audi’s last internal combustion engine will be the best we’ve ever built.’