Suu Kyi arrived at the International Court of Justice in The Hague to defend her country over genocide allegations on the second day of hearings in a case filed by the Gambia.

The leader, 74, stood to address a panel of judges as she began her country’s defence with opening remarks expected to reject the UN court’s jurisdiction and denying wrongdoing by the Southeast Asian nation. 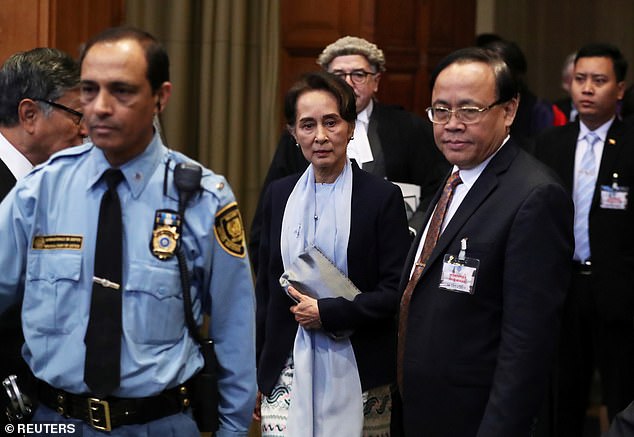 ‘Regrettably The Gambia has placed before the court a misleading and incomplete picture of the situation in Rakhine state,’ Suu Kyi said.

More than 730,000 Rohingya fled Myanmar after the military launched a crackdown in western Rakhine state in August 2017. Most now live in crowded refugee camps in Bangladesh.

Myanmar argues the military ‘clearance operations’ in Rakhine were a justifiable response to acts of terrorism and that its soldiers have acted appropriately.

Suu Kyi had listened impassively on Tuesday as lawyers for Gambia detailed graphic testimony of suffering of Rohingya at the hands of the Myanmar military.

The head of a UN fact-finding mission on Myanmar warned in October that ‘there is a serious risk of genocide recurring.’

The mission also found that Myanmar should be held responsible in international legal forums for alleged genocide against the Rohingya. 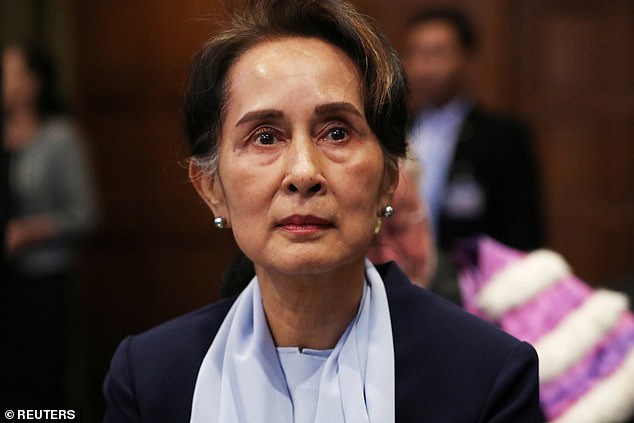 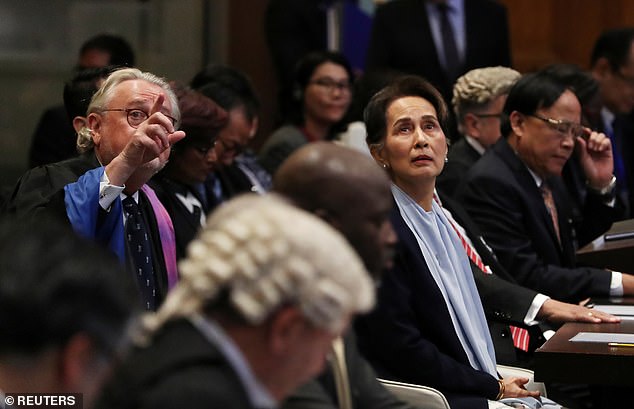 ‘Regrettably The Gambia has placed before the court a misleading and incomplete picture of the situation in Rakhine state,’ she said 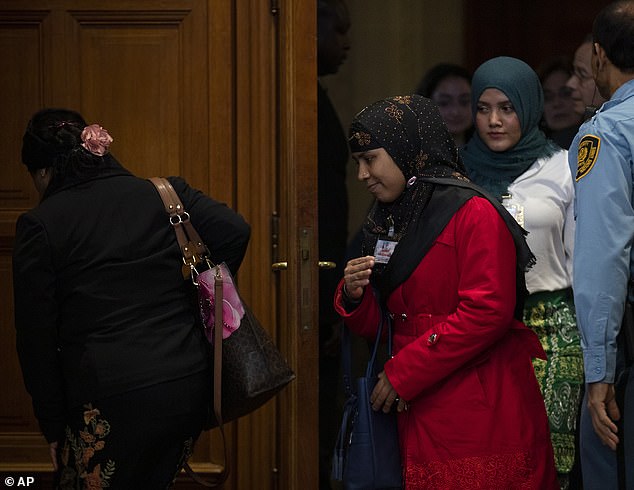 Today’s hearing, expected to last about three hours, will see Suu Kyi defend the country’s armed forces, which kept her under house arrest for about 15 years.

Suu Kyi was awarded the 1991 Nobel Peace Prize in absentia for championing democracy and rights under Myanmar’s then-ruling junta.

A legal team from the Gambia – acting on behalf of the 57-country Organization of Islamic Cooperation – has asked the world court in The Hague to take ‘all measures within its power to prevent all acts that amount to or contribute to the crime of genocide’ in Myanmar.

Scores of protesters in support of Myanmar’s State Counsellor Suu Kyi stood with banners and pictures in front of the Peace Palace of The Hague today. 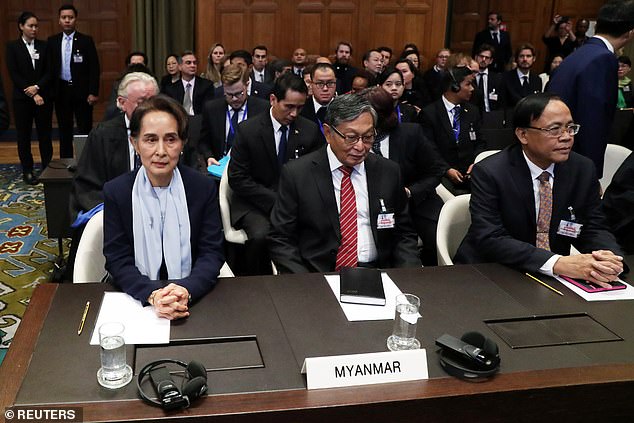 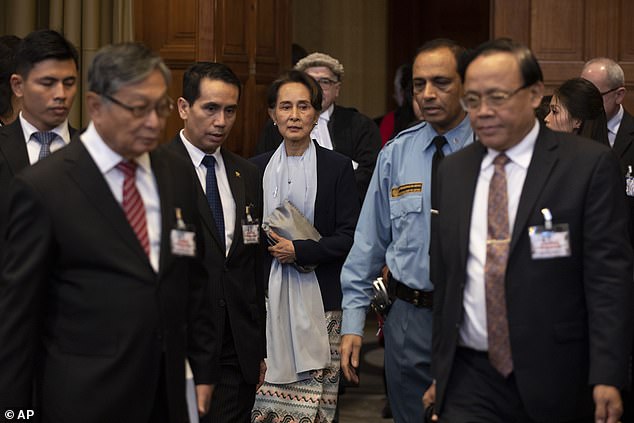 Today’s hearing, expected to last about three hours, will see Suu Kyi defend the country’s armed forces, which kept her under house arrest for about 15 years 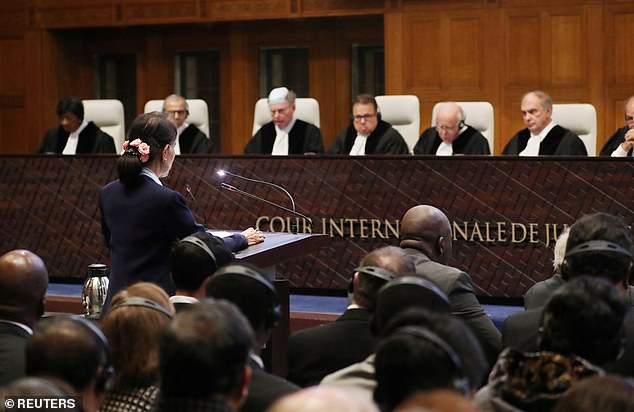 Others stood outside the International Court of Justice to demonstrate against Suu Kyi, with signs reading ‘justice for Rohingya’.

On Tuesday, Justice Minister Aboubacarr Tambadou urged the court to ‘tell Myanmar to stop these senseless killings, to stop these acts of barbarity that continue to shock our collective conscience, to stop this genocide of its own people.’

Beyond detailing graphic accounts of rape, mutilation and the killing of children by soldiers in a three-hour presentation yesterday, Gambia’s representatives underscored what they said was Myanmar’s ‘ongoing genocidal intent’ and the government’s continued incitement of racial hatred. 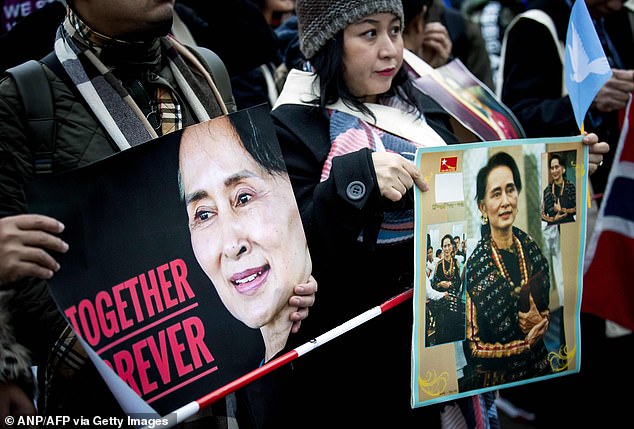 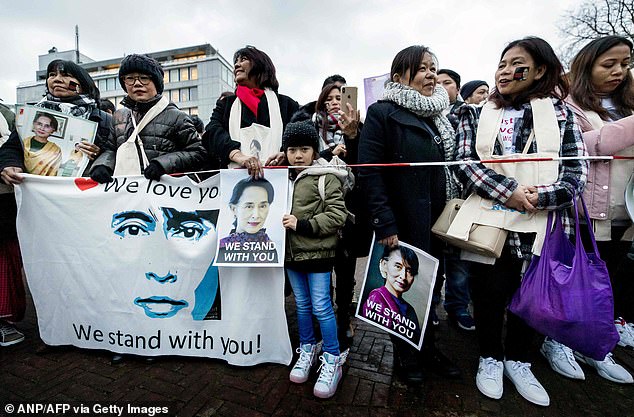 Suu Kyi supporters held signs reading ‘we love you, we stand with you’ and ‘together forever’ ahead of the hearing 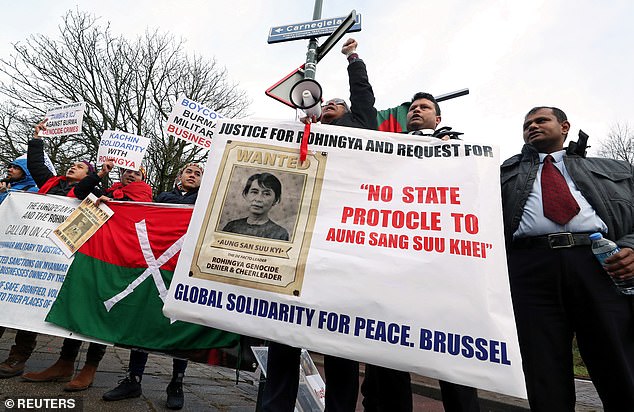 They said there is ‘overwhelming’ evidence of genocide and they want steps taken to prevent ‘extrajudicial killings or physical abuse; rape or other forms of sexual violence; burning of homes or villages; destruction of lands and livestock, deprivation of food’ and other acts ‘calculated to bring about the physical destruction of the Rohingya group in whole or in part.’

Myanmar has strongly denied the charges but says it stands ready to take action against wrongdoers if there is sufficient evidence.

A statement on the website of the Ministry of the Interior said recently that the renewed international pressure on the country was due to a lack of understanding of ‘the complexities of the issue and the narratives of the people of Myanmar.’

The hearings are scheduled to end on Thursday.