Aurora Expeditions’ Greg Mortimer, a ship with an X-bow, will launch soon

If you suffer from seasickness, THIS is the cruise ship for you: Expedition boat set to launch that has a cutting-edge ‘X-Bow’, which keeps it steadier in rough seas

If you’ve always wanted to go on a cruise but worry about feeling seasick, this is the boat for you.

October 31 will see the launch of a cutting-edge new expedition cruise ship with an ‘X-Bow’ which, it’s claimed, will help to keep it steady in rough seas.

The ship, the Greg Mortimer, belongs to cruise company Aurora Expeditions and is named after the Australian adventurer who was one of the first Australians to climb Antarctica’s highest peak, the Vinson Massif.

The Greg Mortimer, pictured, which has a cutting-edge X-Bow

The bow, or front, of the Gregg Mortimer vessel is beak-shaped. It’s been engineered to penetrate the waves in a way that traditional cruise ships currently do not.

As a result, fewer vibrations are sent back through the body of the ship, giving passengers a smoother, sleeker ride.

Aurora Expeditions has not claimed outright that the 100-passenger Greg Mortimer stops seasickness, but the company does say: ‘The main advantage of the X-Bow is that it can pierce waves with more stability than a traditional ship bow.

‘Instead of simply rising on the waves and then dropping with tremendous force, the X-Bow is able to absorb the force more consistently across its surface – enabling the ship to remain more stable during poor weather conditions, increasing comfort for passengers and crew alike.’ 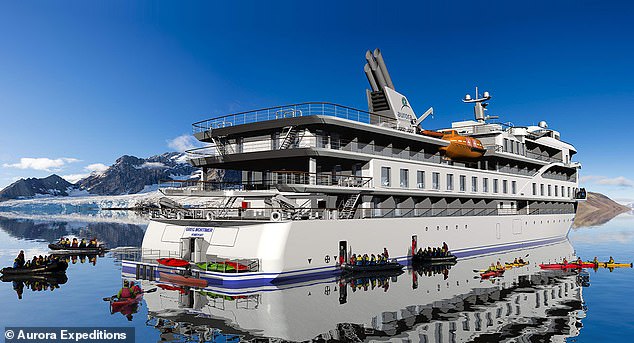 Aurora Expeditions has not claimed outright that the Greg Mortimer, pictured, stops sea sickness, but the company does say: ‘The main advantage of the X-Bow is that it can pierce waves with more stability than a traditional ship bow’

Although the Greg Mortimer is the first expedition ship to boast an X-Bow, the bow has been used effectively on tug and shipping vessels in the past.

Feedback from the crews of these ships has confirmed the benefits of the bow.

It’s made by Norway-based Ulstein, and a steward on the Bourbon Orca – the first vessel built with the X-Bow bow – is quoted on the company’s website as saying: ‘I don’t have to ask the captain to reduce speed while I’m preparing dinner. The casseroles stay put.’

According to the NHS, seasickness is caused by ‘repeated movements when travelling, like going over bumps in a car or moving up and down in a boat’.

It continues: ‘The inner ear sends different signals to your brain from those your eyes are seeing. These confusing messages cause you to feel unwell.’

After the Greg Mortimer is christened in Ushuaia, Argentina, on October 31, it will make its maiden voyage into Antarctica.

Antarctica is known for having some of the roughest sea conditions in the world, so a smoother journey will no doubt be appreciated by all who sail on her, as well as those who fear nausea on the high seas.