While some of Australia’s native animals are undoubtedly sweet to pet, others are not known for their warm and fuzzy approach to humans.

One Reddit user found out the hard way when they came in close contact with the largely innocent-looking wombat, posting in a thread called ‘don’t f**k with wombats.

‘I will probably still have the scars to prove it, too,’ the anonymous victim wrote.

‘Congratulations! You’ve collected one of life’s “get out of jail free!” cards. From now on, whenever you swear or otherwise abuse or diss wombats and someone says “What did a wombat ever do to you?”, you can just show them this pic,’ said one person.

‘People see a cute, nuggety animal that looks like a living cuddly toy. They fail to understand how powerful those buggers are. I don’t fear them, but I respect the f**k out of them,’ said another.

‘I fear them. Demon teddy bears of doom’.

Although wombat attacks are rare they do occur with terrifyingly vicious results.

In July last year a family who reared wombats for the famous Australian TV soap A Country Practice were left with horrific injuries after they were viciously attacked by one of the animals.

The animal lovers, who dedicated much of the 1980s training the wombats to play the role of ‘Fatso’ in the series, were forced to kill the wild wombat that had wandered onto their property with an axe to stop the attack, leaving them ‘devastated’.

Adult wombats can become easily aggressive particularly if they perceive a threat.

Most aren’t aware although wombats are short, stocky and appear overweight, they are extremely agile and can run extremely fast, particularly when in attack mode. 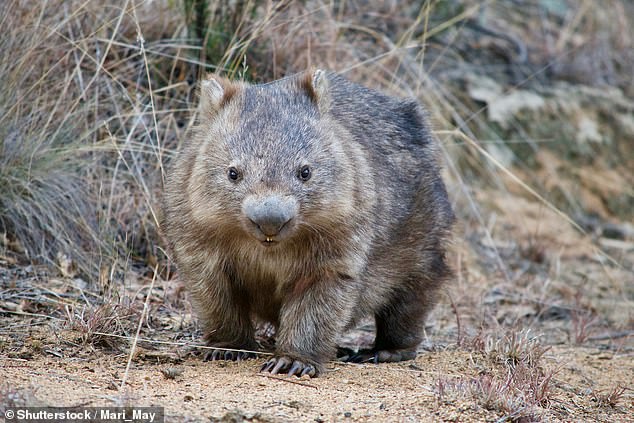 Wombats have a backward-facing pouch so when digging it doesn’t gather soil in its pouch over its young.

Although nocturnal, wombats may also venture out to feed on cool or overcast days.

Wombats have distinctive- cube shaped feces they stack to mark territories and to attract mates.

Wombats are herbivores with their diet including grasses, herbs, bark and roots.

The marsupial prefers to be left alone and can become vicious when feeling threatened.

Wombats are burrowing animals with powerful limbs who have short wide feet and sharp, powerful claws.

A wombat normally exits a burrow after sunset looking for dinner where it might choose to feed on grasses, herbs, bark and roots.

During this time, it may return to its burrow for a sleep after eating or if retreating from a potential threat, always returning underground before sunrise.

On cool or overcast days, wombats are known to forage longer and during the day.

Despite their adorable looks and demeanour it is always recommended to keep a safe distance from wombats to avoid being on the receiving end of its wrath.