Aussie mum and family at Concord West lose privacy, daylight and has scaffolding fixed to her home

An Australian mum is outraged and stunned by a huge house going up next door that she claims will rob her family of privacy and is already blocking out her daylight.

Livia, who didn’t want her surname used, is upset by the sheer size and close proximity of the emerging ‘castle’ next to her family’s home at Concord, in Sydney’s inner west.

In official plans the home looks like a two-storey duplex, but since construction commenced, somehow it appears to be far larger than her home – which also has two levels.

Livia, who didn’t want her surname used, is upset by how close the emerging building is, in Concord west in Sydney, to her family’s home and by its size

Neighbours in Colane Street have also remarked it appears higher, wider and longer than anything else on the same road.

Before the rebuild, the home was a humble single-storey brick bungalow. But not any more.

The land was bought by a Chinese developer, who hired local company, Homme Certifiers, to approve the $1million plan, A Current Affair reported.

Livia and neighbours have dubbed the sprawling building, surrounded by vast scaffolding, ‘the Castle of Concord’.

The mum of two said the neighbouring house is already blocking out their natural light from mid-afternoon each day.

When it is completed she said the neighbours will be able to see directly into her bathroom.

Livia also pointed out the scaffolding for the construction, in at least one place, is resting on her house.

The local authorities responded by saying they had ‘undertaken enforcement action’ at the site but that the developer had rectified a ‘compliance issue’.

That is believed to relate to the scaffolding crossing the property boundary. 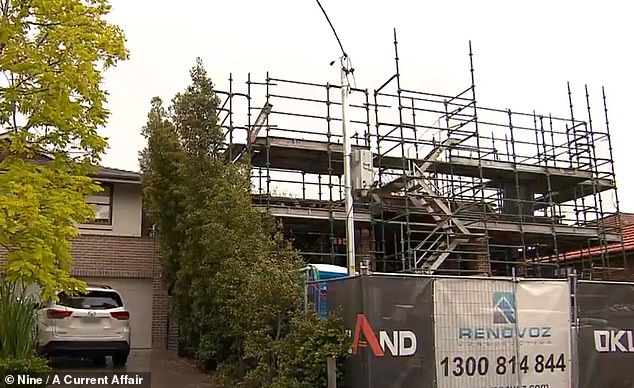 In official plans the home looks like a two-storey duplex, but since construction commenced, somehow it appears to be far larger than her home which also has two levels 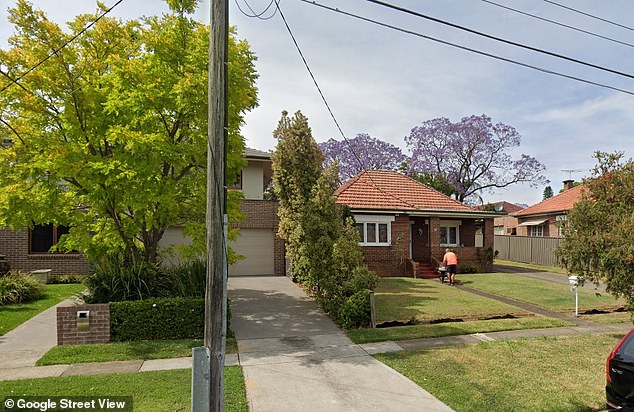 Before the block was bought by a Chinese developer it was home to a humble single-storey brick bungalow. But not any more

Livia described the neighbouring property as ‘the worst thing’ to happen to her family.

The mum of two cannot understand how it was approved given that when she built a home in the quiet suburb 12 years ago there were stricter planning approvals.

She claimed when she built her family home, Canada Bay Council restricted everything from building height to setbacks (the open space required around a building) and even brick colour.

But she claims her neighbouring property didn’t need council approval and instead only needed a certificate from a private certifier.

Livia and other neighbours suspect what is being built may not comply with building codes.

Canada Bay Council issued a statement saying the developer addressed concerns raised and confirmed it was approved by a private contractor.

‘Council has undertaken enforcement action at 12 Colane Street, Concord West following a complaint and the compliance issue has subsequently been addressed by the developer.

‘The approval of the development at 12 Colane Street was issued by a private certifier via the State Environmental Planning Policy (Exempt and Complying Development Codes) Low Rise Housing Diversity Code (SEPP).’