An Australian senator is calling for transgender women to be banned from competing in women’s sport at all levels.

She plans to introduce a private members bill to parliament that would ‘protect single-sex sport for Australian women and girls as a fundamental good for our society’.

Senator Chandler wants to amend the Sex Discrimination Act to reintroduce the biological sex-based definitions of ‘man’ and ‘woman’ that were removed from the law by the previous Labor government.

‘Sporting codes, clubs and volunteers can have legal action taken against them for offering single-sex women’s sport,’ she explained.

The 31-year-old Tasmanian said single-sex sport for women and girls should ‘not only be legal, it should be celebrated, promoted and encouraged at every level of sport’.

Her push comes after recent controversies – both local and international – of transgender athletes competing in women’s sporting competitions.

Northern Beaches Mermaids BG Volleyball Association in September raised concerns about ‘self-identifying’ females in their competition, saying they had an unfair advantage and should continue to play in existing ‘mixed’ competitions.

Overseas, Jordan and Iran were at odds this month after claims Iran fielded a transgender goalkeeper to win a crucial international woman’s match. 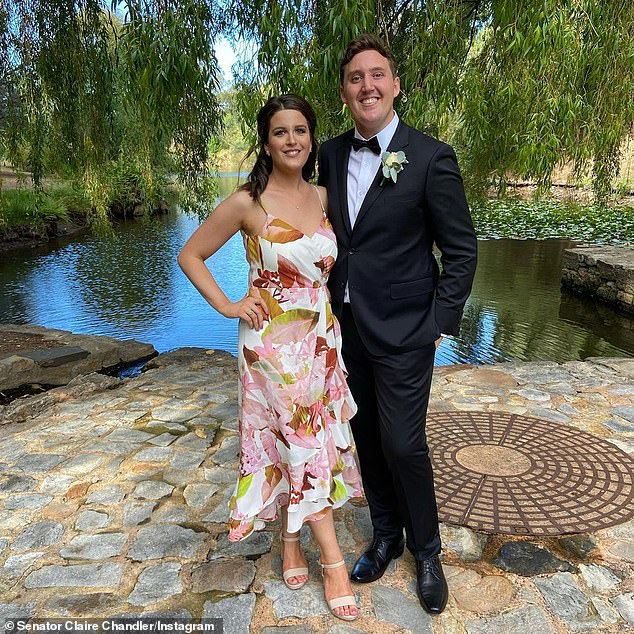 Iranian goalkeeper Zohreh Koudaei saved two goals in a penalty shootout resulting in a 4-2 win over Jordan – qualifying them for the Women’s Asia Cup.

Jordan demanded a ‘gender verification check’ on Koudaei but Iran said all players underwent ‘hormone’ examinations ‘to avoid any problems’.

Under Senator Chandler’s proposal, trans people would not be banned from playing sport but individual clubs and sporting leagues would need to offer options for both single-sex teams and teams with trans players at all levels of sport which ‘supports participation for everyone’.

Current laws allow sporting clubs to be subject to legal action for offering single-sex sport for women, with Labor introducing provision for transgender athletes when it altered the Sex Discrimination Act.

Senator Chandler said the law was being ‘used as a weapon’ to pressure sporting organisations to operate based on ‘self-affirmed gender identity’ and her bill was aims at protecting women’s sport.

‘Nobody, whether it’s our biggest national sporting codes or a volunteer at the local footy club, will be breaking Commonwealth Law by offering single-sex women’s sport,’ she said.

Senator Chandler said current laws were complicated and needed to be simplified so all levels of sport were clear on what the rules are.

‘Sporting clubs and codes shouldn’t have to hire teams of lawyers, doctors and sport scientists to prove they can keep their women’s sport’s competitions and teams single-sex,’ she said.

‘It’s a complex issue but we can’t deny women have certain biological attributes and have trained very hard to compete,’ she told Sky News.

‘A lot of those competing are pre-operative so they are still men identifying as women but have not gone through a full hormonal change, so there’s huge issues here.’

The goalkeeper (pictured) has also defended herself to Iranian media previously

The International Olympic Committee this week loosened its rules around transgender athletes.

The IOC reversed its 2015 guidance that transgender women should be allowed to compete in women’s sport provided their testosterone levels are below a certain limit for at least 12 months before their first competition.

It said there was ‘no definitive answer’ on whether testosterone conferred a competitive advantage for trans and some intersex women and that its impact on success differed from one sport to another.

The decision – part of a new framework to be introduced after the Beijing Winter Games – was broadly welcomed by LGBT+ and human rights advocates as a move towards greater inclusivity.

But some scientists said leaving hard decisions about whether trans and intersex women had an unfair advantage to sports federations was ‘unreasonable’ and added confusion to an already contentious issue.