The Australian swimmer sent home from the Commonwealth Games for disciplinary reasons has broken his slience after being cut from the team for ‘inappropriate use of medication’.

Isaac Cooper had been set to make his Games debut in Birmingham in the 50m and 100m backstroke, 50m butterfly and 50m freestyle after first representing Australia at the Tokyo Olympics last year.

The 18-year-old was favoured to get several podium finishes at the Birmingham Games after winning a bronze medal mixed medley relay team at the Tokyo Olympics and silver at the recent world championships in Budapest.

However, Swimming Australia sent the teenager star home from their training camp in France ‘following some wellbeing challenges, including the use of medication’.

‘He has acknowledged his mistakes and accepted the consequences, and Swimming Australia will continue to support him as he addresses these challenges,’ SA said in a statement.

Cooper has confirmed that the medication was not a banned substance and said he would need to work on his mental health and wellbeing following the incident. 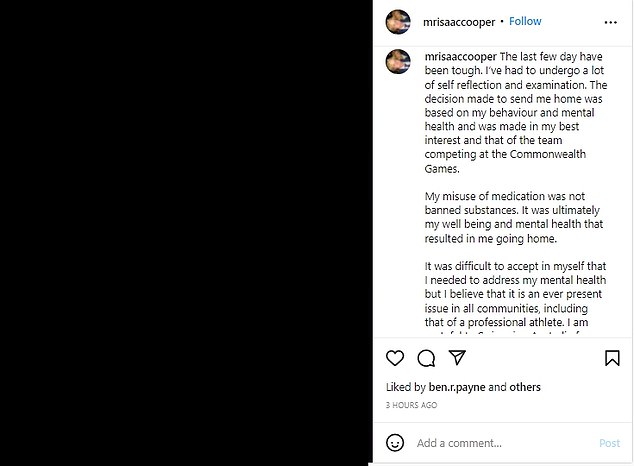 ‘The last few day have been tough,’ he posted on Instagram.

‘I’ve had to undergo a lot of self reflection and examination. The decision made to send me home was based on my behaviour and mental health and was made in my best interest and that of the team competing at the Commonwealth Games.

‘My misuse of medication was not banned substances. It was ultimately my well being and mental health that resulted in me going home.’

Instead of being angry at his Commonwealth Games expulsion, Cooper thanked Swimming Australia for identifying the issues so he could work on them.

‘It was difficult to accept in myself that I needed to address my mental health but I believe that it is an ever present issue in all communities, including that of a professional athlete. I am grateful to Swimming Australia for helping to identify an issue and offering their support and resources to help me.

‘More than anything I wish I could be there, racing with my team and cheering them on. The team means so much to me and I have made friends for life but the decision was not made in the interest of the next few weeks, rather the interest for the future of my swimming career. 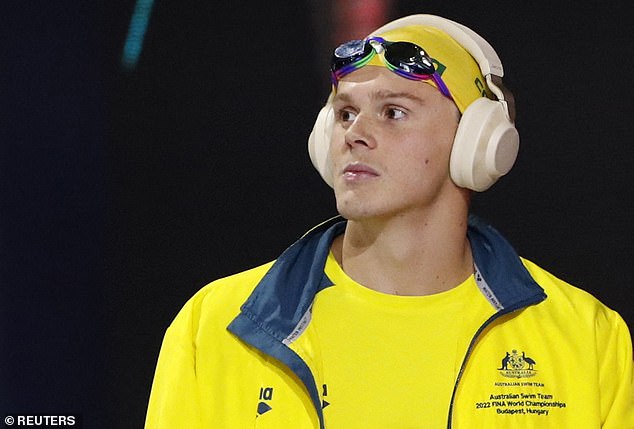 Cooper has also made the decision to walk away from his swimming club in Brisbane to focus on his mental health for the immediate future.

‘I have also come to the point in my career where I will have to move away from Rackley Swim Club,’ he posted.

‘They have done wonderful things to support me and have brought me to the level that I am at today.

‘I will forever be grateful to my coaches and the support staff but more than anything my squad mates. You are my family away from home and it breaks my heart that I won’t be seeing you everyday any more.’

Cooper said he would continue to work with Swimming Australia privately and hopes to return to the pool in the future.

‘For the next few weeks I will be reflecting and resetting for the future. I will use this time of reflection to also examine the current issues,’ he posted.

‘I would like to thank the many people who have reached out to me and my family and offered there help and assistance. It means more to me then you will ever know.

‘My dad has always told me that Coopers are either up or getting up but never down. I’m certainly pretty low but this is the first step up back up. I’ll see you there.’