The party is over,’ declared Australian mining magnate turned eco-warrior, Andrew Forrest – who is known as Twiggy in his home country.

Speaking in a gravelly Antipodean brogue from a breakfast table laden with tea and toast, the tycoon claimed fossil fuels are in ‘terminal decline’. And he warned ‘climate change chaos’ would wipe out the entire human race if left unchecked.

The video message was not subtle, nor was it meant to be.

Give it some gas: Australian mining magnate turned eco-warrior, Andrew Forrest (pictured) describes cleanly-produced hydrogen as the ‘fuel of the future’

For this rallying call to ditch fossil fuels and save the planet also marked Twiggy’s latest naked sales pitch for green hydrogen power, which he described as the ‘fuel of the future’.

The 59-year-old – who has already amassed a £15billion fortune from the iron ore riches of Western Australia – was perfectly open about his desire to cash in from tackling climate change.

The difference this time is it would be guilt free.

He said: ‘The great thing is when you make a serious dollar out of it, you can still go home and you can look your kids straight in the eye, not a lump of guilt in our throat.’

The iron ore billionaire is a household name in his native Australia. But he is largely unknown in the UK.

This could change because Forrest – founder of mining giant Fortescue Metals Group (FMG) – has his sights set on bringing green hydrogen power to Britain.

He has already found a heavyweight backer in the form of Lord Bamford, chairman of manufacturing giant JCB and one of the biggest names in British business.

Just before Cop26 got underway, Forrest announced a huge hydrogen export deal with JCB and Ryze Hydrogen, a firm set up by Lord Bamford’s son Jo.

The agreement will see Fortescue Future Industries – FMG’s green energy arm – become the largest supplier of hydrogen in the UK.

JCB will buy 10 per cent of Fortescue’s global green hydrogen production – or 1.5m tonnes a year – and then manage its distribution in Britain.

Forrest has said the deal will be worth between £5.1billion and £6.6billion annually – if, of course, he can produce hydrogen at this scale.

Some are highly sceptical, and say green hydrogen is unproven. But it represents one of the first major global hydrogen export deals and will be – according to Forrest – the first of many.

He estimates the green hydrogen market could generate revenues of £9 trillion by 2050, dwarfing any other industry. 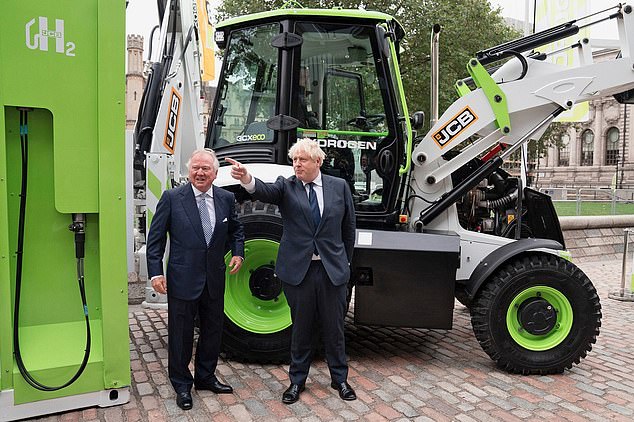 Forrest became Australia’s richest man – though not richest person as the top spot is claimed by mining magnate, and his Perth neighbour, Gina Rinehart – after founding Fortescue Metals Group almost 20 years ago.

Having generated more than his fair share of carbon emissions over the years, he is trying to save the planet – and make another vast wad in the process.

His Damascene conversion has seen him develop a fixation on ‘green’ hydrogen power, which he says will replace fossil fuels and be critical to tackling climate change.

Glasgow’s Cop26 summit, crammed with world leaders, captains of industry and financiers, represented the ultimate sales opportunity for Twiggy and his team.

Electrolysers are then used to send an electric current through water to separate it into its component parts of hydrogen and oxygen.

Energy giants like BP and Shell are investing heavily in producing blue hydrogen, which uses methane from natural gas instead of renewable energy to generate electricity, and is cheaper to produce.

But blue hydrogen has been dismissed by Forrest as a ‘charade’ because it still generates carbon emissions which are then stored in the ground.

Boris Johnson has talked of transforming Britain into the ‘Qatar of hydrogen’, with households eventually using hydrogen gas made across Northern England to cook their breakfast.

If Forrest gets his way, it will be his hydrogen which will be used to fry our bacon and eggs, as well as power machinery across the UK and the world.

JCB, too, is also convinced hydrogen energy will play an essential role for heavy industry.

Last month it announced it is investing £100m to develop ‘super-efficient’ hydrogen engines for its machines, which it hopes will be on sale by the end of next year.

But the scope of Forrest’s ambition in hydrogen power is on a different level. He has pledged to produce 15m tonnes of green hydrogen by 2030, many times the amount produced globally today.

He is so confident of hitting this target he has vowed to make Fortescue carbon neutral by 2030, 20 years earlier than the 2050 net zero target agreed by dozens of developed nations.

Producing hydrogen in industrial quantities will require vast plains of solar panels, wind turbines and huge hydro-electricity schemes. Which brings us to perhaps the biggest problem with green hydrogen.

It is hugely difficult and expensive to produce – one of the reasons why Tesla boss Elon Musk has branded the concept of hydrogen powered cars as ‘mind bogglingly stupid’.

Forrest is undeterred. He recently announced plans to build the world’s largest hydrogen manufacturing facility in Central Queensland, which is expected to double the world’s hydrogen production capacity.

He also has hydrogen projects on the go in Papua New Guinea, the Democratic Republic of Congo, and also Kenya and Ethiopia. His mission to become a global hydrogen power has seen him criss-crossing the globe on a private jet.

As part of a PR blitz in London before heading up to Glasgow for the Cop26 summit, Forrest had a fleet of black cabs painted green and emblazoned with the Fortescue Future Industries logo, and the message: ‘Green hydrogen can save us’.

If he is right, then Twiggy may well become the wealthiest environmentalist of them all.