Australians have questioned whether Scott Morrison cooked a curry he posted on social media as a chef claims the creation was poorly made.

The prime minister proudly shared photos on Facebook of his preparation station and finished beef and potato Massaman curry on Saturday night, after returning home from quarantine following his UK G7 summit trip.

‘After almost a month away it’s nice to get back home to Sydney with Jen and the girls and this little guy, Buddy,’ he wrote, alongside a picture of him with his dog.

‘Saturday night is curry night, so will be back in the kitchen this afternoon to make one of the girls’ favourites.’

Scott Morrison shared a photo of him alongside pet Buddy (pictured) on Facebook over the weekend, updating Australians about his family activities 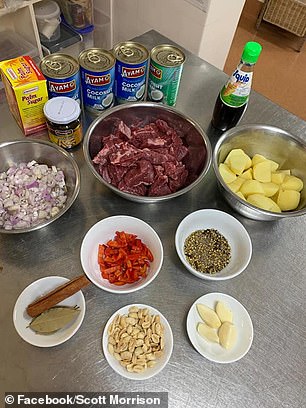 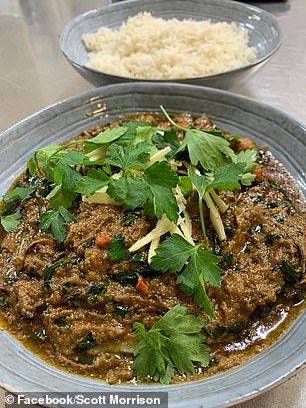 In the comments, he shared photos of his meal prep and finished beef and potato Massaman curry, sparking a debate over whether the cooking session was staged

Mr Morrison later commented that his ‘prep was done’, sharing a photo of spices and ingredients laid out in bowls, followed hours later by an image of the completed dish and a link to the recipe.

But eagle-eyed Australians quickly flocked online to accuse the nation’s leader of staging the meal, claiming the ingredients and recipe did not match the end result.

‘Fake news! Another managed PR drop to cover up #MorrisonFailure. Don’t think Scott Morrison cooked a curry like he stated he was going to,’ another wrote.

‘Person who selected photos from old ones has no idea what a Mussaman (sic) curry looks like.’

‘And where did the spinach come from? Totally different curry than ingredients shown. Fake. Like him,’ a third said.

‘Doesn’t look like the recipe does it?’ someone else chimed.

In a video on TikTok detailing his investigation, Mr Wilson said the award-winning chef, who is behind the Long Chim restaurant enterprise, confirmed that Scomo could have made the meal using the ingredients and recipe. 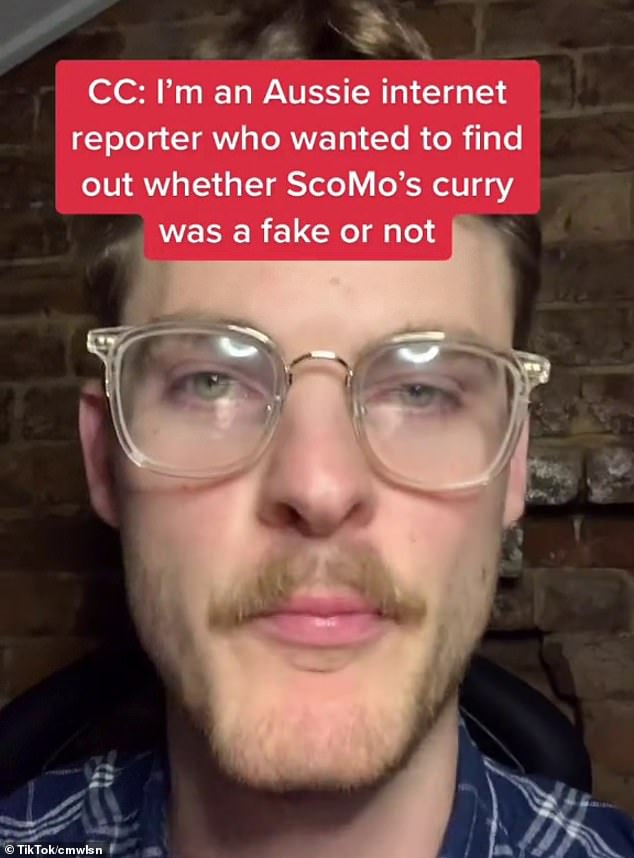 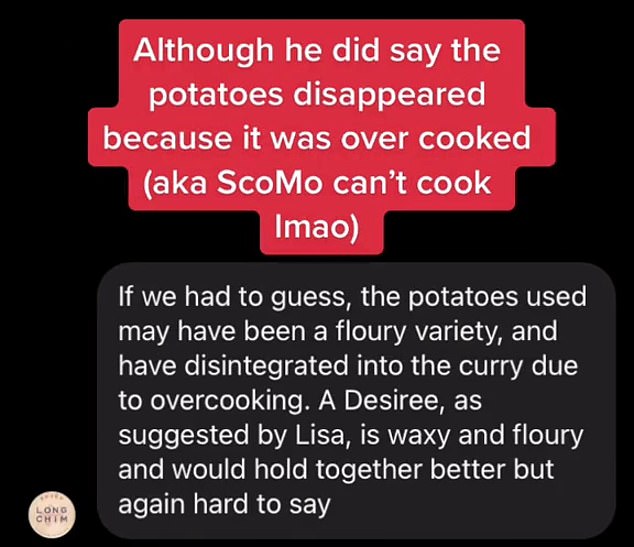 Mr Thompson’s team at Long Chim told Mr Wilson the ingredients did match the meal, however, the potatoes were overcooked

‘The prep photo seems to have most of the ingredients listed in this particular recipe,’ a representative from Long Chim told Mr Cameron in a statement.

‘The dish in the ”after” photo doesn’t immediately resemble a massaman, but could indeed be assembled from the prepped photos.’

However, the restaurant’s spokesperson said the prime minister appeared to overcook the potatoes, which Mr Wilson suggested translated into Mr Morrison being a bad cook.

‘If we had to  guess, the potatoes used may have been a floury variety, and have disintegrated into the curry due to overcooking,’ the Long Chim spokesperson said.

The saga left Mr Wilson’s followers amused, with some labelling it ‘CurryGate’, in reference to former US president Richard Nixon’s Watergate political scandal in the 1970s. 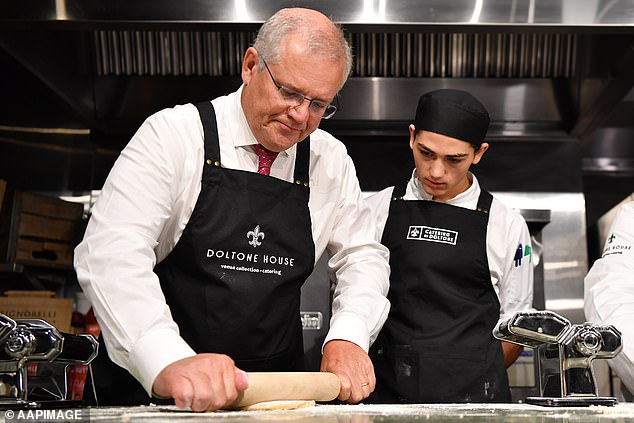