By Andrew Prentice and Kylie Stevens For Daily Mail Australia

Labor remains favoured to topple the Coalition and win the Australian election next month, according to latest figures released by the TAB.

With the Labor leader still in quarantine after contracting Covid-19, the figures made public on Tuesday will have Prime Minister Scott Morrison on edge as he looks to make up ground on his political rival.

With attention this week turning to the fallout from the China–Solomon Islands security pact, the next move of both major parties could be critical.

Labor remains favoured to topple the Coalition and win the Australian election next month, according to the latest odds released by the TAB (pictured, Opposition Leader Anthony Albanese and partner Jodie Haydon) 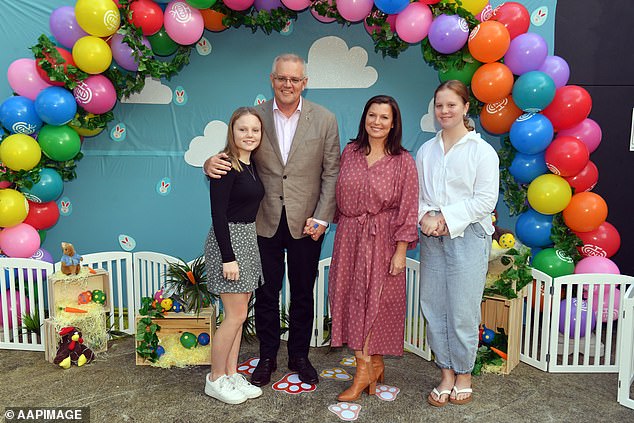 With Labor leader Anthony Albanese still in quarantine after contracting Covid-19, the figures made public on Tuesday will have Prime Minister Scott Morrison (pictured, with his family) on edge as he looks to make up ground on his political rival

Earlier on Tuesday, it emerged Mr Morrison has increased his lead over Mr Albanese as Australia’s preferred prime minister.

Mr Morrison’s popularity as the nation’s preferred leader has extended to 46 per cent – a two per cent rise since the last Newspoll.

The result is unchanged from the last two Newspolls conducted since the election was called a fortnight ago.

The Coalition has lifted its primary vote to 36 per cent, just one point behind Labor, which remains steady at 37 per cent.

Support for the Greens dropped to 11 per cent and Pauline Hanson’s One Nation also fell by one point to three per cent.

Meanwhile, the latest Ipsos poll for The Australian Financial Review also shows Labor still ahead of the Coalition – despite a two point drop in the party’s primary vote.

Around 42 per cent of voters surveyed believe Labor will win the May 21 election, while 34 per cent believe the Coalition will claim a fourth consecutive term in power.

Labor has 34 per cent of the primary vote, two points clear of the Liberal Party which has recorded a one point rise since the last Ipsos poll three weeks ago.

Mr Albanese’s disapproval rating increased to 35 per cent – a rise by three points – while dissatisfaction with the prime minister remains steady at 48 per cent.

But the Ipsos poll has Mr Albanese as Australia’s preferred prime minister with 40 per cent – two points ahead of Mr Morrison.

In terms of overall competency, both leaders are tied at 42 per cent – the lowest level for either a prime minister or opposition leader in 27 years.

‘This underscores the views of the undecided voters participating in the focus group who, irrespective of past voting behaviour, expressed a lack of enthusiasm for the options presented at this election,’ Ipsos concluded.