Australia is leading the world in coronavirus tests, conducting more than one million since the outbreak began, helping it to smash the deadly virus’ infection rate.

The country’s widespread, and free, testing has been a cornerstone of its remarkable fight against COVID-19, which has killed more than 300,000 people worldwide.

If a resident is concerned about having the coronavirus, they can go to any public testing centre and be seen without charge.

In New South Wales and Western Australia, even those not eligible for Medicare can get the test for free.

But he warned the public not to be complacent as restrictions are lifted, saying the risk remained ‘significant’.

A man is seen being tested by a nurse at Sydney’s St George Hospital on Saturday (pictured), with more than one million coronavirus tests having been conducted across Australia 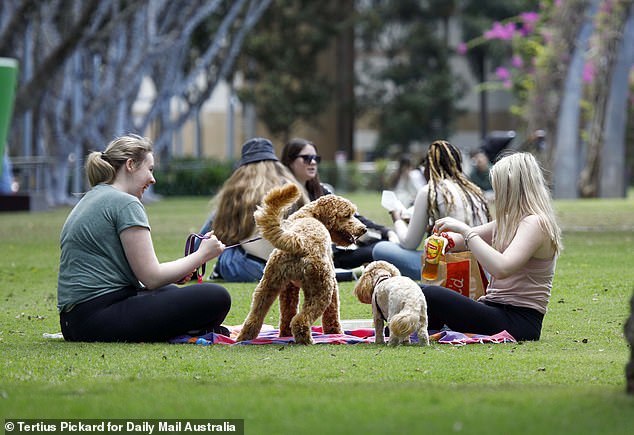 ‘The pandemic is not over. The risk to vulnerable people remains significant,’ he told reporters in Canberra on Saturday.

‘With restrictions being relaxed we still need to be vigilant.

‘It’s essential that we all continue to do our part.

‘What we hope is the measures we have in place in Australia will not result in a resurgence in COVID-19.’

He also revealed that 5.7 million Australians had downloaded the COVIDSafe tracing app so far, heralded as the country’s way out of the last restrictions.

The government has set a target of 10 million people downloading the app, which is 40 per cent of the population. 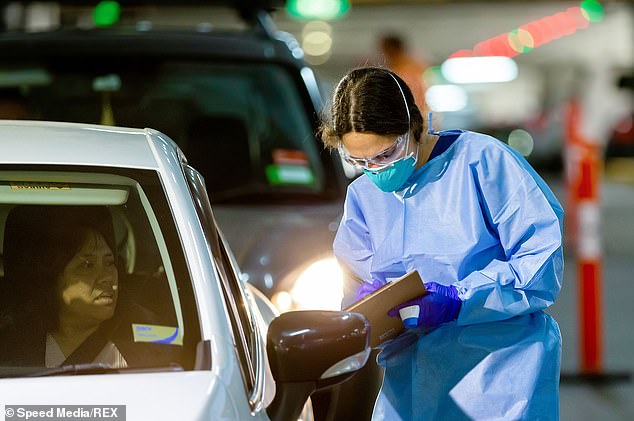 Victoria has ramped up its testing, including at drive through centres such as this one at Highpoint shopping centre (pictured on May 4) 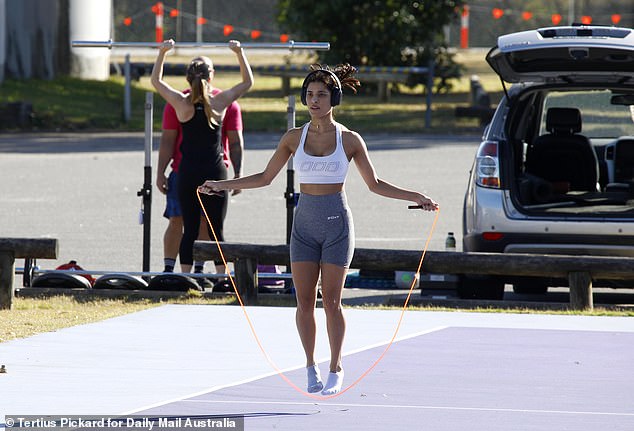 Cafes, public parks and playgrounds also buzzed with activity as Queenslanders headed outside to embrace the sunshine (pictured in Brisbane on Saturday)

The Department of Health confirmed to Daily Mail Australia that it believes there are around 16 million adult smartphone users, which are its target population for the app.

HOW HAS AUSTRALIA BEATEN COVID-19?

Australia’s infection rates are in stark contrast to those in many other G20 countries, including the United Kingdom, the United States, Italy and Spain.

Australian health experts say the infection rate has been steadied due to several factors:

– The tracing of carriers

– Self-isolation of those at risk

– An early ban on travel  from China

– The isolation of all Australian arrivals

The first case of COVID-19 infection in Australia – a Chinese citizen who had arrived from Guangzhou on January 19 – was reported in Melbourne on January 25.

Six days later Australia banned the entry of foreign nationals from China and ordered citizens returning from that country to self-isolate for 14 days.

That rule was further extended to anyone entering the country on March 15.

Prime Minister Scott Morrison then took the decision to close the country’s borders on Friday March 20.

‘The broad uptake of the app across the community will increase the ability of state and territory public health authorities to efficiently and accurately find close contacts if a user tests positive for COVID-19,’ a spokesman said.

‘The use of the app by as high a proportion of the population as possible will complement and accelerate the existing manual processes to contact people exposed to COVID-19.’

Australians are enjoying the benefits of restrictions being gradually lifted across the nation – a reward for enduring weeks of curbs that have helped limit virus’ spread.

But the repeated message from health authorities is to approach these new found freedoms with care for fear of sparking a second wave of the disease.

States and territories have begun the first stage of a three-stage process to lift restrictions on outdoor and indoor gatherings and business operations.

Australians are able to sit in pubs, cafes and restaurants for the first time in weeks after isolation and social distancing measures kept the lid on infections and COVID-19 deaths.

This is excluding those in Victoria, where no lifting of such restrictions has been announced.

Australian Medical Association president Tony Bartone said there is still a risk the virus could flare up as hot spots or small outbreaks. 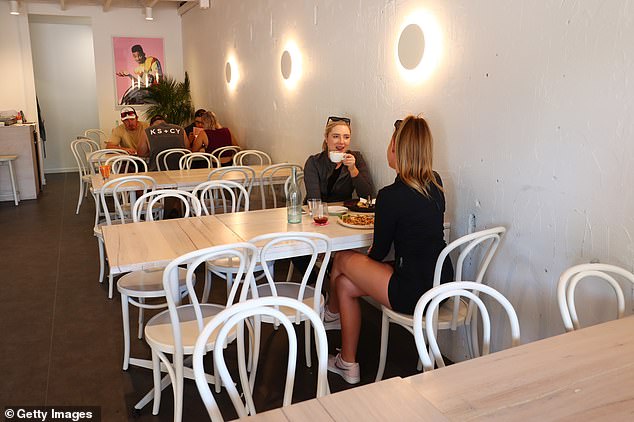 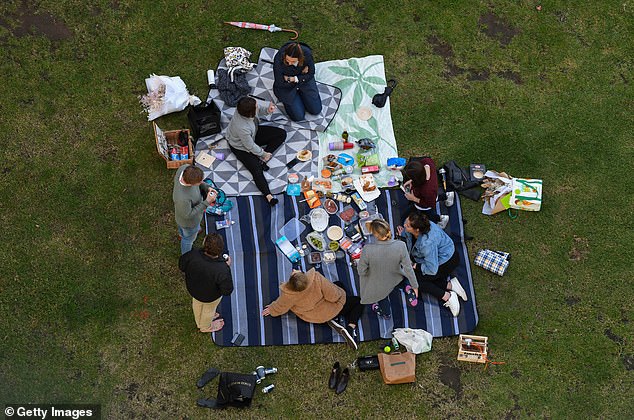 Friends are seen enjoying a birthday picnic at Milsons Point on Saturday (pictured), with outdoor gatherings of ten people now allowed in NSW

* The national death toll is 98 – 47 in NSW, 18 in Victoria, 13 in Tasmania, nine in Westeern Australia, Six in Queensland, four in South Australia and three in ACT (Two QLD residents who died in NSW have been included in both state’s counts)

* Two clusters in Victoria, at McDonalds and Cedar Meats, continue to push the state’s infections higher with 11 new cases on Saturday

* About 5.7 million of an estimated 16 million people have registered for the federal government’s COVIDSafe tracing app since April 26

‘If we do the wrong things, we risk undoing all the gains that we’ve made so far,’ Dr Batone told ABC.

‘So, the message is, yes, appreciate all the efforts, appreciate the opportunity to release some of those measures, but let’s not have a party, let’s not go to town.’

He said people must still maintain social distancing, cough etiquette, washing hands regularly and staying away from others if they are unwell.

‘Those messages are really the backbone as we progressively lift those restrictions,’ he said.

The number of cases in Australia now stand at 7037 after 20 new cases were reported over the past 24 hours.

The death toll from the pandemic remains at 98, extremely low by international standards.

The new cases included 11 in Victoria, including a further two infections connected to the west Melbourne abattoir cluster, which now stands at 98. 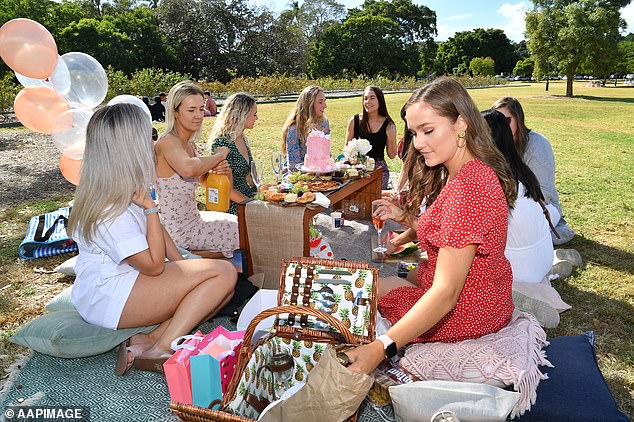 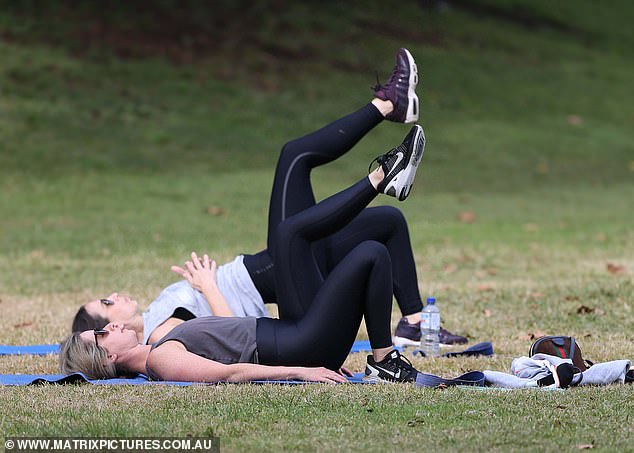 Elsewhere, a McDonald’s restaurant in the north Melbourne suburb of Fawkner has recorded an additional case, with the outlet’s cluster growing to 11.

There was only one new case in Queensland, while 193 people have been tested for COVID-19 at the North Rockhampton Nursing Centre after a nurse working at an aged care facility was diagnosed with the disease on Friday.

All tested negative, including 114 residents.

In NSW there were three new cases, while Tasmania recorded its first case in a week, a 70-year old man who was on the ill-fated Ruby Princes cruise ship.

The national cabinet met on Friday and endorsed a $48.1 million mental health response plan that is set to roll out in coming months, including research and support services. 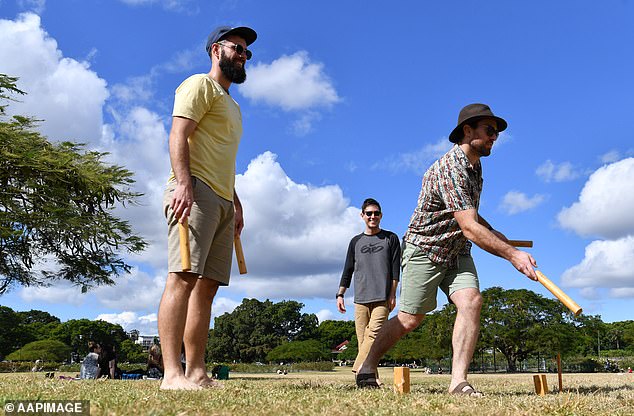 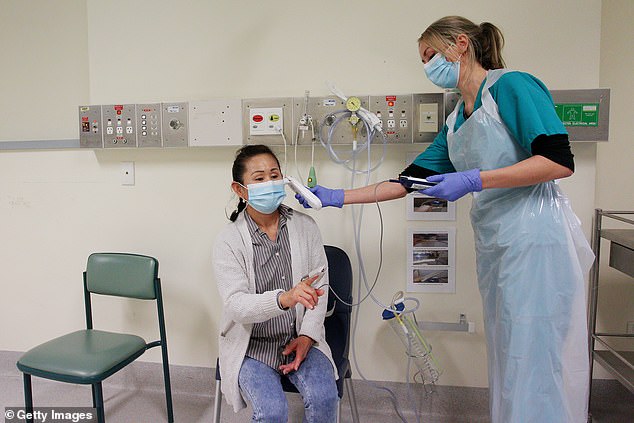 ‘Many people are experiencing very significant financial stress due to job losses, many people are feeling very lonely and isolated, separated from family members and loved ones in other parts of the country,’ he said.

NSW diners welcomed a taste of normality as they return to their favourite restaurants and bars, but Premier Gladys Berejiklian has warned COVID-19 case numbers will inevitably rise in the state in the coming weeks.

Outdoor gatherings of up to ten people are permitted from Friday and up to five people, including children, can visit another NSW household.

Religious gatherings and places of worship can welcome up to ten people, while restaurants, cafes, pubs and clubs can have up to ten patrons so long as they maintain social distancing. 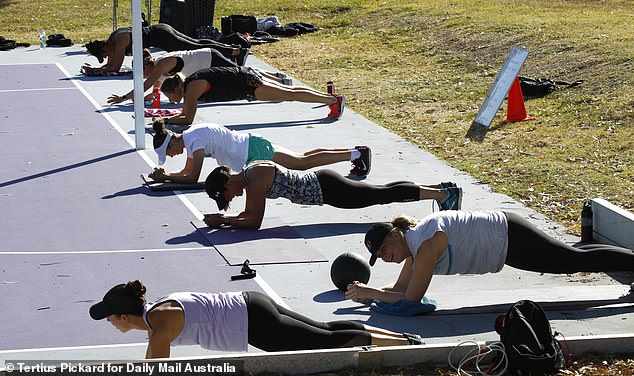 Fitness fans in Brisbane on Saturday (pictured) after restrictions were lifted, but widespread testing it still underway 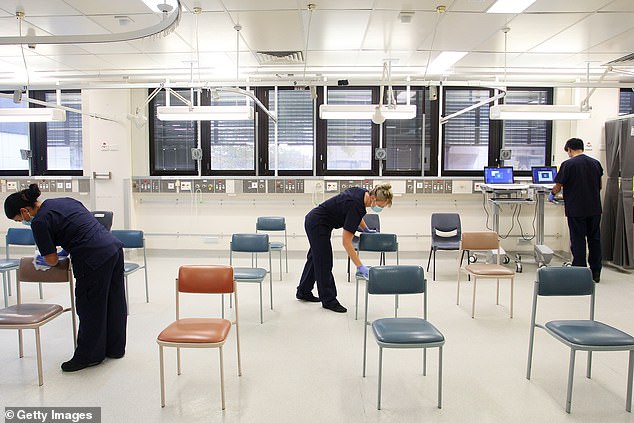 Staff are seen wiping down a waiting room at a COVID-19 assessment clinic on Friday in St George Hospital, Sydney (pictured)

BL Burgers in Newtown welcomed its first diners on Friday with manager Eilidh McGuire saying customers were in the store ‘from the second we opened’.

‘It hasn’t been too difficult to manage so far, I think the rain has slightly held it off, but we’ve had people coming saying can we sit with four … that’s the bit we have to be extra careful, not having people sit too close together,’ Ms McGuire told AAP.

At The Rio bar in Summer Hill, operational manager Fabrizio Culici said pouring the first beer – into a glass pint – had felt ‘phenomenal’.

‘We just hope that it keeps going, hope that this is certainly not going to be a short-lived thing and we go back to deliveries, because it’s going to be very hard to survive if that happens,’ Mr Culici told AAP.

Local Shannah Baichoo was among the first to return to the reopened bar, with her and her husband resuming what was once a regular Friday night ritual. 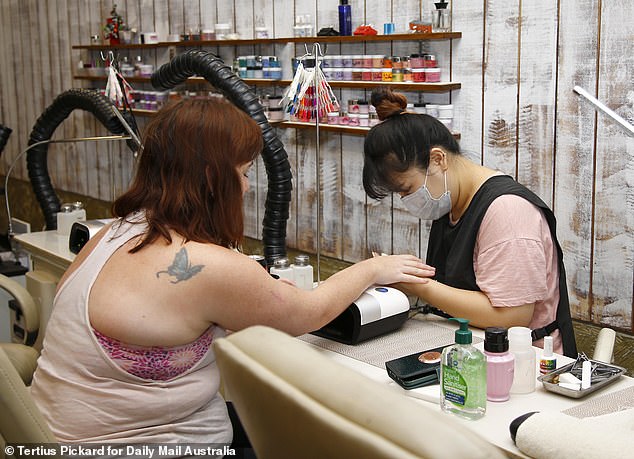 ‘It’s like a signifier of life becoming normal again,’ she said.

Ms Berejiklian on Friday warned NSW residents an increase in COVID-19 cases was likely, but said authorities would only be really concerned if numbers grew exponentially.

‘I won’t be standing here in the next few weeks talking about eight, nine or ten (cases) – I don’t know what I’ll be saying, but it certainly won’t be a handful,’ the premier told reporters.

Ms Berejiklian acknowledged that lifting restrictions overseas – such as in South Korea and Singapore – had resulted in fresh virus outbreaks. 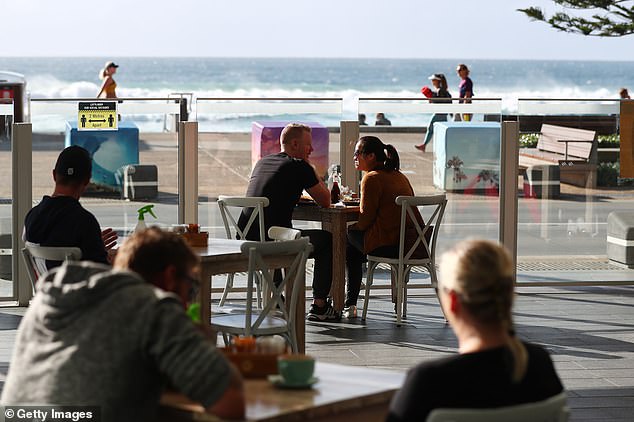 Diners stared out towards the beach as cafes reopened this weekend (pictured, Surfers Paradise on Saturday)