Australian is second to only the United States for the most shark attacks in the past year with NSW waters the most dangerous in the country.

America easily led the world in unprovoked attacks in 2019 with 41 bites, up from 32 the previous year, but significantly lower than the nation’s five-year average of 61 bites annually.

Australia had the second-most shark attacks globally with 11, down from its five-year annual average of 16 bites.

The University of Florida keeps track of attacks around the globe and releases the figures in its annual International Shark Attack File.

The 64 unprovoked bites worldwide in 2019 was a 22 per cent drop on the most recent five-year average and only two, one in Reunion and the other in the Bahamas, were fatal.

That was a drop from the average of four deaths from unprovoked attacks a year.

‘We’ve had back-to-back years with unusual decreases in shark attacks, and we know that people aren’t spending less time in the water,’ Gavin Naylor, director of the Florida Museum of Natural History’s shark research program, said.

‘This suggests sharks aren’t frequenting the same places they have in the past.’

Queensland had four and Western Australia one.

Florida was the world’s shark attack hotspot with 21, representing 51 per cent of the US total and 33 per cent of unprovoked attacks worldwide.

Florida, however, experienced a significant drop from its most recent five-year annual average of 32 incidents.

Naylor said the decline may reflect changes in the migration patterns of blacktip sharks, the species most often implicated in Florida bites. 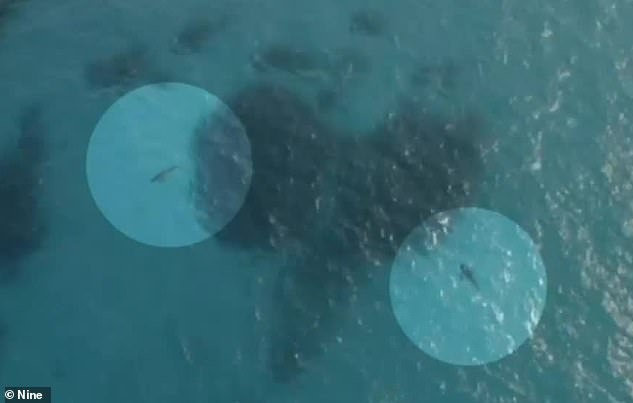 Hawaii had nine and California and North Carolina both had three.

South Africa, once a hotspot for shark attacks, only had one.

‘The news coming out of South Africa is that they’re not seeing as many sharks,’ Tyler Bowling, ISAF manager, said.

‘White sharks have been moving out of some areas as pods of orcas move in, and there are reports that sharks are disappearing along the whole Cape.’

Surfers and others in board sports accounted for 53 per cent of the attacks, swimmers and waders 25 per cent snorkelers/free divers (11 per cent ), body-surfers (eight per cent) and scuba divers (3 per cent).