Australia is the number one destination for retired British expats

Is Australia the best spot for Britons to retire abroad? Nearly quarter of a million people now claim their pension Down Under as it tops the global list

Australia is the clear hotspot for British expat pensioners, with 20 per cent of retired Britons claiming their state pension from the country, research has found.

Though southern European countries such as France and Spain have traditionally been expat hotspots, the latest figures from investment platform Easymoney show Australia and the US are currently more popular retirement destinations.

Nearly a quarter of a million – or 234,880 to be precise – British expat pensioners claim their state pension from Australia, the equivalent of the population of Swansea.

In total, 1.2million British expat pensioners claimed from abroad last year. The US, Canada, Ireland and Spain made up the rest of the top five spots.

But not all countries fare equally when it comes to drawing a state pension. Some retirees are losing out by more than £4,000 a year due to differences in pension rules across jurisdictions.

In certain countries, such as Canada, India and Australia, state pensions are frozen when you first retire or move abroad.

However, this isn’t the case for others, including EU countries and the US.

That means if you move some of these countries, whatever amount the state pension is set at when you leave is what you will continue to get throughout retirement, unless you move back to the UK.

This currently reduces the state pension of around 550,000 British pensioners living overseas.

The Government says: ‘The Government has a very clear position, which has remained consistent for around 70 years: the UK state pension is payable worldwide but is only uprated abroad where we have a legal requirement to do so or a reciprocal agreement is in place.’

Andrew de Candole, chief executive at Easymoney, said: ‘Spending your golden years abroad is an attractive option for many but it does rely on having a sizeable private pension pot.’

The International Consortium of British Pensioners and other groups have campaigned on the issue but so far all efforts to unfreeze state pensions have been rebuffed by the Government.

This is despite cross-party support for change from sympathetic backbench MPs, and the Labour party at the 2017 election. 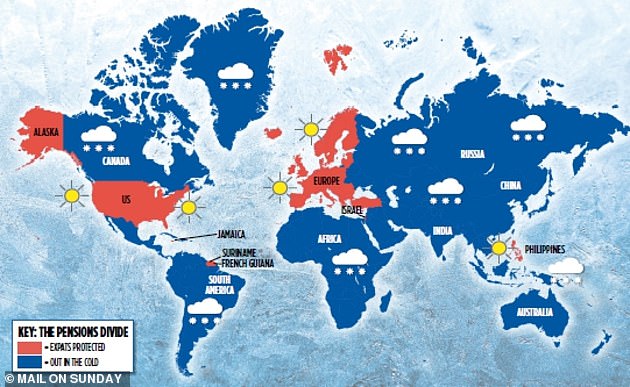 If you have any question you wish to be answered as part of the section, send an email with the subject line ‘expat’ to editor@thisismoney.co.uk.

How much is the state pension?

The basic state pension is currently £125.95 a week.  It is topped up by additional state pension entitlements – S2P and Serps – accrued during working years.

The two-tier state system has changed for people retiring since 6 April 2016, when it was replaced by a new ‘flat rate’ state pension. This is currently worth £164.35 a week.

People who have contracted out of S2P and Serps over the years and retire after April 2016 get less than the full new state pension.

But they can fill gaps in unpaid and or underpaid National Insurance in previous years, and build up more qualifying years if they have enough time between now and state pension age.

But even if you paid in full for a whole 35 years, if you contracted out for some years on top of that it might still reduce what you get.

Everyone gets the option of deferring their state pension to get more in their later years. You can check your NI record here.