‘I think I need to improve my technique’: Casey Dellacqua laughs off excruciating Ash Barty interview after her former doubles partner stitched her up on live TV

Casey Dellacqua has joked that she needs to improve her interview technique after an awkward on-court chat with Ash Barty.

The former Australian tennis star, 34, interviewed her good friend and former doubles partner who beat Petra Kvitova in the quarter finals of the Australian Open on Tuesday afternoon.

Nine’s Jim Courier was supposed to give the interview but Barty summoned his fellow commentator Dellacqua, telling him: ‘She’s got no choice, get your butt out here girl’.

Dellacqua walked on to the Rod Laver Arena in front of 15,000 fans and reluctantly took the microphone, saying: ‘I’m too nervous. I’m shaking.’

She asked a few questions before cracking up and saying: ‘I am actually not loving this, Ash.’

Barty wrapped her arm around her and said ‘it’s OK, it’s alright’ before Dellacqua said: ‘I don’t even know where to go with this interview to be honest’.

Courier, who was still on court, then advised her to ask about Barty’s opponent and the interview continued.

‘To be honest, she helped me out in that moment and that’s what friends do.

‘Obviously I’ve been given credit for helping her but in that moment she was helping me. I know I need to improve my interviewing skills to be honest.’

She added: ‘That is how we talk every day. We talk as friends, we give each other cuddles and I’m really proud of her and I’m glad I had to share that moment with her.’ 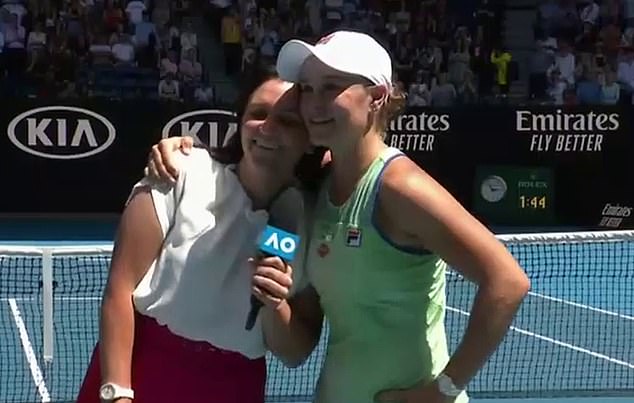