Australia has secured another 85 million doses of the Pfizer Covid-19 vaccine to be used as booster shots from next February – as all Sydneysiders over the age of 18 were urged to ‘strongly consider’ getting the AstraZeneca jab.

The federal government said the supply deal with Pfizer-BioNTech will ensure every Australian can receive an additional booster shot on top of their initial two doses.

The agreement includes 60 million doses of the jab arriving on Australian shores in the first quarter of 2022 and another 25 million in 2023.

The timeline is based on evidence which suggests those who receive the Covid-19 vaccine will need a booster shot within a year of receiving their first two doses.

The supply deal – which will also cover any alterations to the vaccine as new strains of the virus are found –  means the Australian government will have received 125 million doses of the Pfizer jab by 2023.

Prime Minister Scott Morrison said the deal meant Australia had ‘turned the corner’ in its national vaccine roll-out, which has been plagued by delays and supply shortages.

Only 15 per cent of the eligible Australian population are so far fully vaccinated against the virus.

‘This is a significant shot in the arm for Australia’s vaccine supply,’ he said. ‘Every Australian will have access to a booster shot if it is needed.’

The agreement comes as Australia’s top immunisation advisory body urged all adults in Sydney to ‘strongly consider’ getting the AstraZeneca shot amid the city’s spiralling outbreak of the highly-contagious Delta strain.

The Australian Technical Advisory Group on Immunisation (ATAGI) on Saturday night said it was changing its advice in response to the city’s coronavirus outbreak, which grew by another 163 infections overnight. 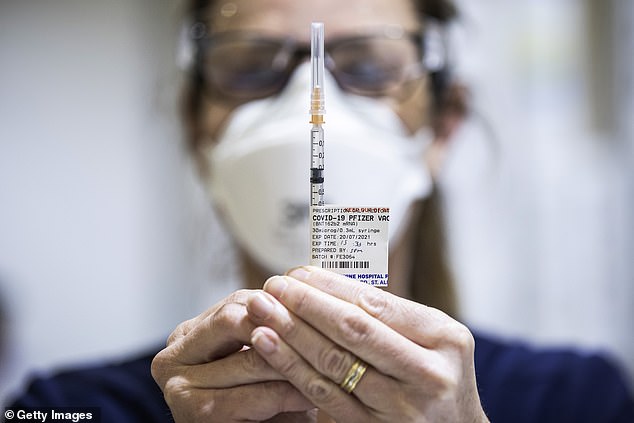 Under the deal secured by the Federal Government, 60 million doses of the Pfizer jab will arrive in the beginning of next year while another 25 million will touch down in Australia in 2023

ATAGI said it was also advising Australians living in areas with coronavirus outbreaks to shorten the time between their first and second doses of the AstraZeneca vaccine to four to eight weeks instead of the usual 12.

What are the chances of getting a blood clot?

Number of people who get blood clots after AstraZeneca per 100,000 people:

Only three per cent of people who get the clots die

‘All individuals aged 18 years and above in Greater Sydney, including adults under 60 years of age, should strongly consider getting vaccinated with any available vaccine including Covid-19 Vaccine AstraZeneca,’ ATAGI said in a statement.

‘ATAGI reaffirms our previous advice that in a large outbreak, the benefits of the Covid-19 vaccine AstraZeneca are greater than the risk of rare side effects for all age groups.’

The Pfizer vaccine is still recommended for younger people due to the risk of the extremely rare but potentially fatal blood clotting disorder linked to the AstraZeneca shot.

Anyone over the age of 18 can already access the British-developed vaccine as long as they provide ‘informed consent’.

While the Pfizer vaccine is the preferred jab for Australians under 60, the advisory group says due to Sydney’s latest outbreak and a supply shortage, it was important that all adults ‘strongly consider’ getting the alternative jab.

ATAGI said the change in advice was due to the current Delta strain of the virus that is circulating in Sydney being more ‘severe’ in younger people than previous strains.

‘The proportion of people less than 60 years requiring hospitalisation appears to be higher than was reported in outbreaks with the original SARS-CoV-2 strain,’ ATAGI said.

‘This reinforces the benefit of protection with any available vaccine.’

Meanwhile, it was also announced another 50,000 doses of Pfizer from the national ’emergency stockpile’ would be delivered to Sydney to help combat the spread of the virus.

The federal government will send the extra Pfizer vaccine doses to NSW on top of the 150,000 already sent after a plea for help from NSW Premier Gladys Berejiklian.

The Commonwealth will send the vials from a national stockpile after other states and territories rebuffed the NSW government’s plea for more vaccines on Friday. 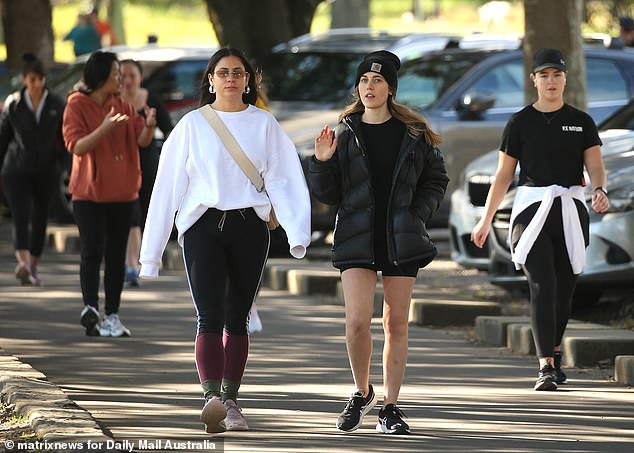 Meanwhile it was also announced another 50,000 doses of Pfizer from the national ’emergency stockpile’ would be delivered to Sydney to help combat the spread of the virus

Earlier this week the Therapeutic Goods Administration said a 44-year-old man from Tasmania and a 48-year-old woman from Victoria had died after taking their first dose of the AstraZeneca vaccine.

In total there have been six deaths out of the six million doses of the AstraZeneca jab administered in Australia since the Covid-19 vaccine rollout began, according to the TGA.

Average Australians are more likely to die from catching Covid-19 than from a blood clot after taking the AstraZeneca vaccine, data has revealed.

The UK meanwhile are on track to roll out their booster shots for those over 50 as early as September.