Speaking on last night’s 60 Minutes, the Liberal senator and father of Channel Nine star Erin Molan said he believed Australia was ‘monstrously vulnerable’ in the face of a Chinese nation determined to demonstrate its dominance in the Western Pacific.

‘We have this naive faith that American military power is infinite and it’s not,’ Mr Molan said.

‘This is a zero-sum game. [China] must remove America from the Western Pacific in order to be dominant in this region, simple as that.’ 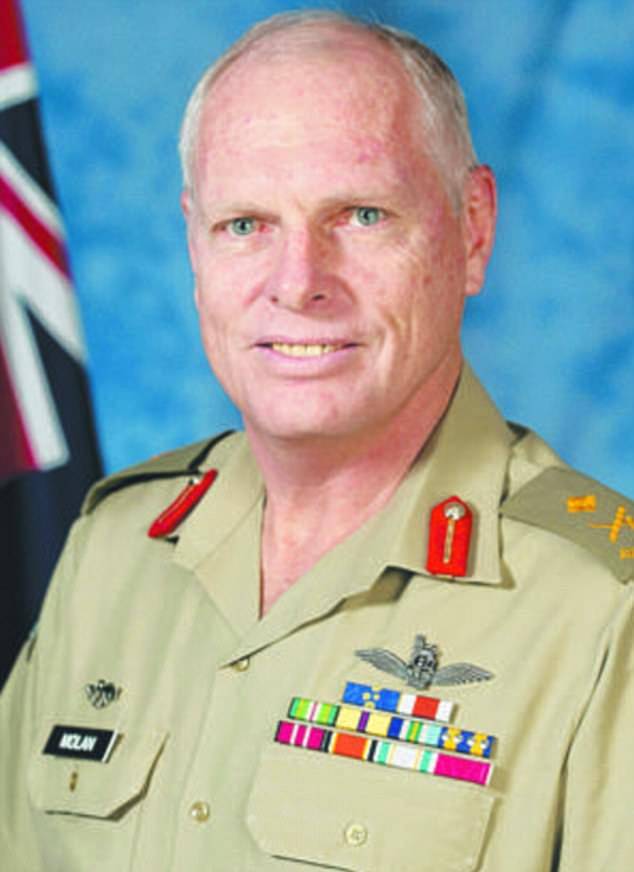 His comments follow claims by Defence Minister Peter Dutton that Australia would necessarily be involved in any military response should China moves towards annexing Taiwan.

‘[China’s] been very clear about their intent to go into Taiwan and we need to make sure that there is a high level of preparedness, a greater sense of deterrence by our capability, and that is how I think we put our country in a position of strength,’ Mr Dutton said at the weekend.

Its editor-in-chief Hu Xijin Tweeted on Saturday that ‘if Australian troops come to fight in the Taiwan Straits, it is unimaginable that China won’t carry out a heavy attack on them and the Australian military facilities that support them’. 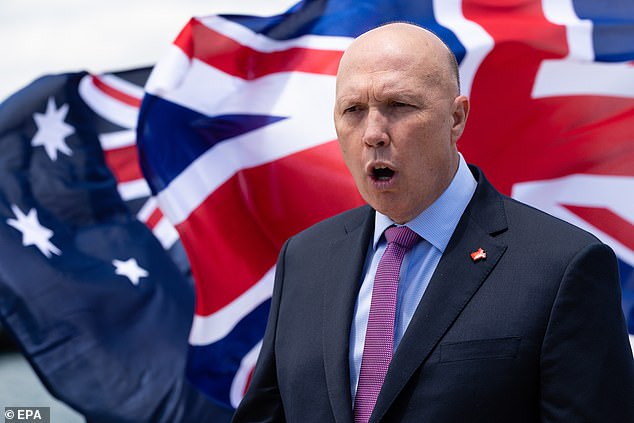 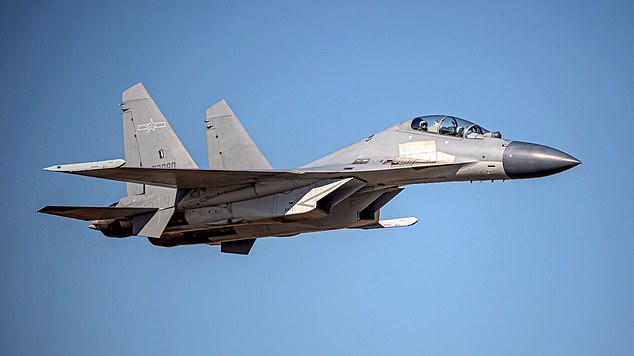 In early October China flew a record 150 flights over Taiwan’s protective zone, known as the ADIZ, in four days in its largest show of force to date near the island 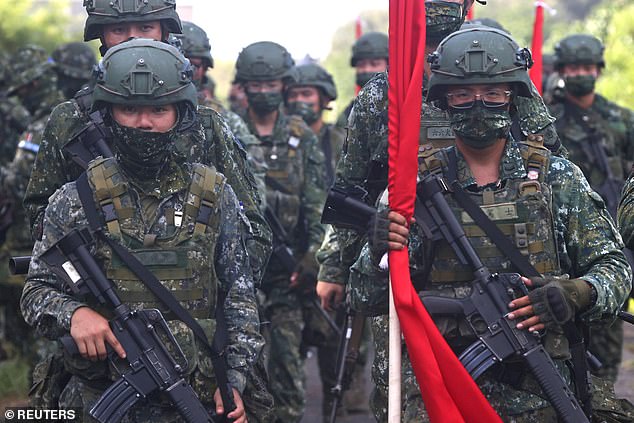 Taiwanese soldiers march to position during an anti-invasion drill on the beach during the annual Han Kuang military drill in Tainan, Taiwan

Mr Molan said while the AUKUS deal for Australia to acquire nuclear-powered submarines was ‘excellent’ when it happened in another few decades, the problem was the next war would be ‘three to 10 years’ away.

‘My estimate is that in a serious conflict the Australian Defence Force only has enough missiles for days. This is not going to be resolved in days,’ he said.

‘We should expand the defence force significantly.

‘We should fund defence now based on our assessment of the national security strategy which is based on the war we want to win.’

In early October China flew a record 150 flights over Taiwan’s protective zone, known as the ADIZ, over four days in its largest show of force to date.

It caused Taiwan’s Defence Minister Chiu Kuo-cheng to say relations between it and the mainland were the worst in 40 years.

Kuo-Cheng told the Taiwanese parliament China will be ready to mount a full-scale invasion of the island by 2025, noting that while Beijing ‘has the capacity’ to attack immediately it is looking to reduce the costs it must bear before giving the order.

The US, like Australia, does not provide formal sovereign recognition of Taiwan but has nevertheless said it has a commitment to defend the island should it come under Chinese attack.

It’s widely expected Australia would join a multi-national response in support of any US defence of Taiwan, though former Prime Minister Paul Keating said last week Australia should remain above any such conflict because Taiwan was ‘not a vital Australia interest’. 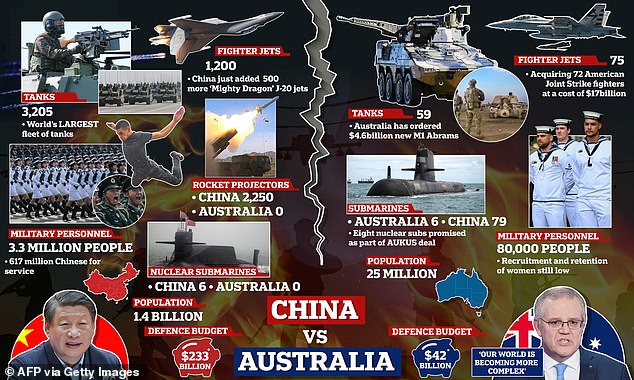 ‘My estimate is that in a serious conflict the Australian Defence Force only has enough missiles for days. This is not going to be resolved in days,’ Mr Molan said of the disparity between China and Australia’s defence capabilities 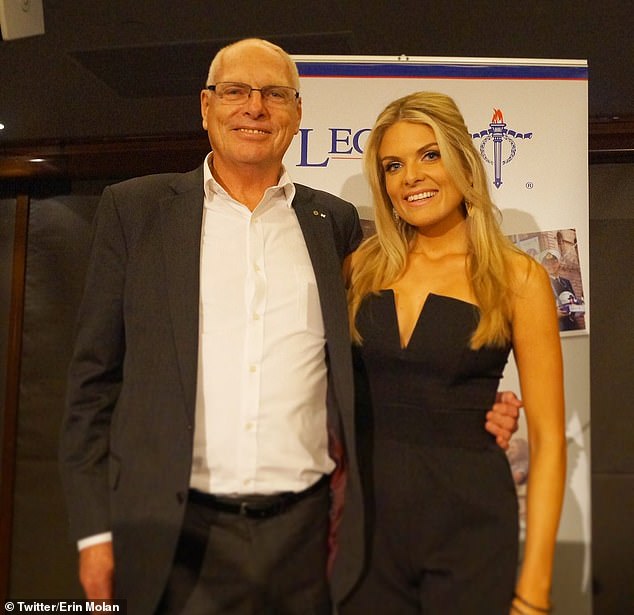 Former Chinese diplomat and translator for former Chinese leader Deng Xiaoping, Victor Gao, provided a frightening assessment to 60 Minutes of a war between China and the US over Taiwan.

‘Use all your imagination. Think about all your nightmares and it will be 10 times more than your worst nightmare,’ he warned.

‘You are talking about the possibility of Armageddon.’

Mr Molan, a former Federal senator, outlined a number of scenarios by which China might stage a takeover of Taiwan, including a blockage of the island which might mean it ‘didn’t need to fight’.

‘The second scenario a Pearl Harbor-type attack to take out all the American bases in South Korea, Japan and Guam, and say to Taiwan, “Do you want to be destroyed by us?” 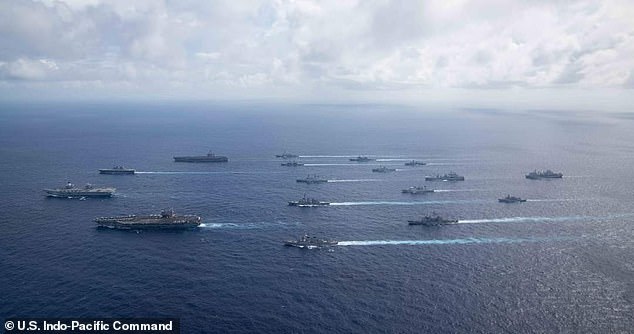 Mr Molan said he did not believe a conflict over the island would be solved by a nuclear option as it would guarantee that US cities will be targeted in retaliation.

He said China’s might meant it could decide to retake Taiwan whenever it wished it.

‘Fundamentally, given the power they have in their military they could act any time from now on, and that frightens me more than anything.’