Australia will accelerate its Covid jab rollout by doubling the number of clinics administering the vaccine after the nation missed its March target for inoculations by more than three million.

‘That means multiple points of presence to give as many people as possible the access to their own doctor, and where that’s not been the choice of that practice, then there are the respiratory clinics and the state clinics,’ he said.

Mr Hunt added he was confident that as the supply of AstraZeneca vaccine from CSL ramps up, so will the number of inoculations against Covid.

The rollout of that vaccine will continue despite growing fears the jab could be related to a blood clotting condition reported in some patients.

Last Monday more than 55,000 people were vaccinated but by Thursday this had increased to a daily rate of more than 79,000, bringing the national total to 841,855 overall.

Australia will accelerate its Covid vaccine rollout by doubling the number of GPs and special clinics administering the jab. Pictured, a nurse receiving her vaccine on the Gold Coast last month

However, four million Australians were due to be vaccinated by the end of March.

‘As we see, supply determines the rollout and as the CSL supply has come on board, we have been able to rapidly accelerate the rollout,’ Mr Hunt said.

‘Given the great and enormous global competition, the fact we have this domestic supply is fundamental.’

Mr Hunt said a decision by the NSW government to open another 36 mass vaccination clinics in the next week was a significant step in the vaccine rollout.

‘We welcome all of the states and territories setting up large vaccination centres. That has always been, always been, part of the plan that was included in the National Partnership Agreements as an option,’ he said.

But Labor’s health spokesman Mark Butler has again been quick to point out that the government had promised to dole out four million doses of the vaccine by the end of March but has yet to reach a million.

‘Per head of population, Australia is not even in the top 100 countries in terms of vaccine delivery,’ he told reporters in Adelaide.

Senior federal minister Peter Dutton said the rollout was being done in an orderly fashion as Australia was not in the same state of ‘mad panic’ as the US and UK. 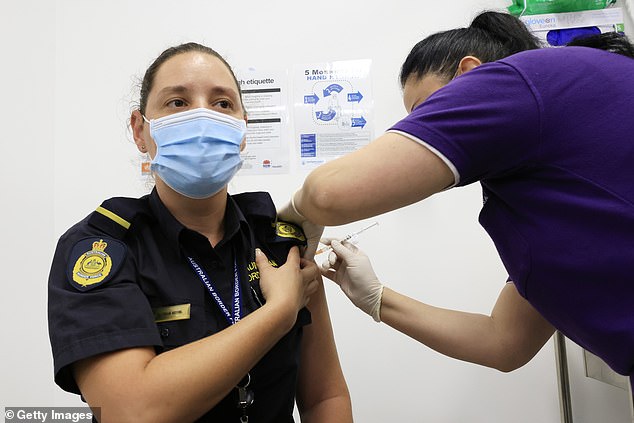 The federal government has been heavily criticised for the slow rollout of the Covid vaccine, with the March target missed by more than three million. Pictured, an Australian Border Force worker being inoculated

‘There will be hiccups from time to time in terms of the rollout of the vaccine but we’ll work with the states, we’ll work with GPs… as we deal with the virus over this calendar year,’ Mr Dutton told Sky News’ Sunday Agenda program.

Both sides of politics back the decision to press ahead with the AstraZenaca vaccine which most Australians will receive after a range of local health experts gave their nod of approval after a Melbourne man was admitted to hospital with a rare blood clotting disorder.

The Therapeutic Goods Administration is investigating this case and working with international experts and regulators.

In the meantime, Mr Hunt said anyone susceptible to blood clotting should seek advice from their GP before going ahead with the jab.

Mr Butler said Labor strongly supports the TGA and other health experts and Australians should continue to follow that advice.

Mr Hunt welcomed news there were no new locally-acquired virus infections on Sunday, when there was the risk of a major break in both Queensland and NSW. 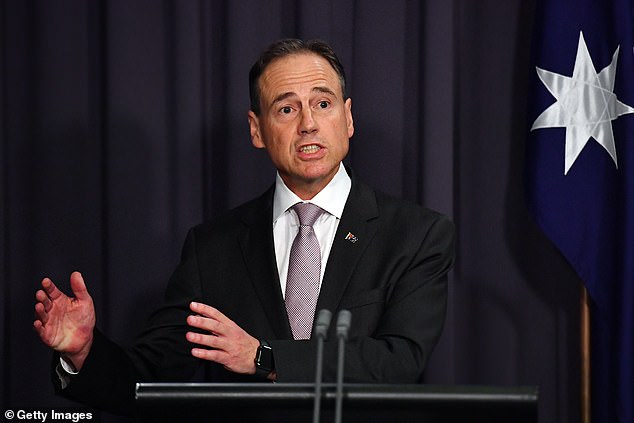 Health minister Greg Hunt (pictured) he was confident that as the supply of AstraZeneca vaccine from CSL ramps up, so will the number of inoculations against Covid

Queensland Health Minister Yvette D’Ath said last week’s three-day lockdown was all part of the plan to get enough people tested, identify the close contacts and get them into quarantine to keep everyone safe.

‘This meant that we can open up our economy, we can enjoy Easter and it is wonderful to see that our tourism operators are recording record numbers, she told reporters.

But Mr Dutton, a federal Queensland MP, hopes such lockdowns and border closures are a thing of the past.

‘It is incredibly disruptive and it makes it very difficult for people to be able to plan,’ he said.

There was one new case among returned travellers already in quarantine in each of NSW, Queensland and South Australia.

But South Australia also reported a man in his 40s remains in the Royal Adelaide hospital ICU in a critical condition.