Australia ultimate must visit list: Top town are not where you expect

One of Australia’s most experienced travel writers has come up with a ‘must visit’ list of virtually unknown places he says are the perfect escapes.

Among the towns Bruce Elder recommends are scenic Denmark in Western Australia, historic Walhalla in Victoria and Strahan, an isolated town on the west coast of Tasmania.

He also recommends getting out to Silverton, population 50, on the edge of the desert – especially for people sick of the city – describing it as the ‘quintessential Australian town’. 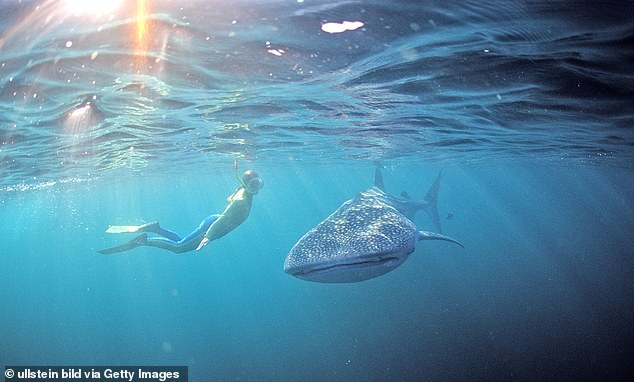 Whale Sharks watched by tourists off the coast in Ningaloo Reef, described by Mr Elder as better than the Great Barrier Reef 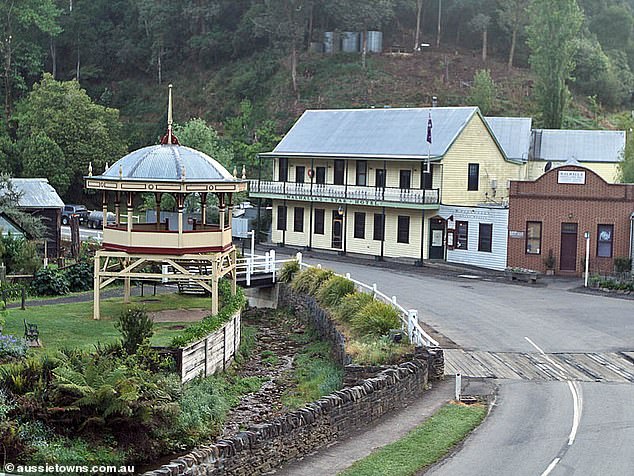 Walhalla, Victoria: A living monument, this ‘masterpiece’ of a town is a nearly perfectly preserved gold mining town from the 1850s and a place to ‘mooch and savour’ 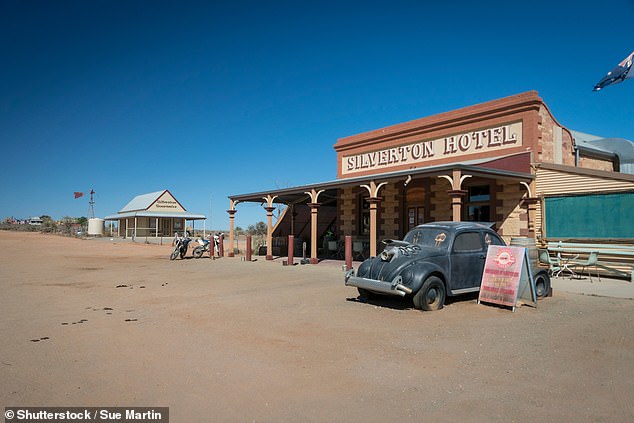 Silverton, population 50, on the edge of the desert is the ‘quintessential Australian town’ 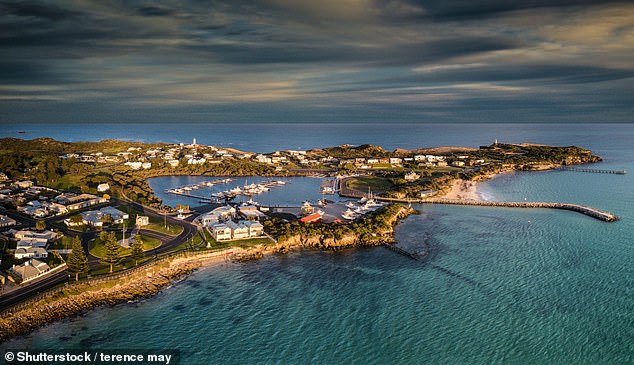 ‘Broken Hill is probably the essence of Australia and a hop, step and a jump away is Silverton,’ Mr Elder said.

‘It’s right on the edge of the desert and totally bizarre. When I went there I met an American bloke on a train who had worked for Al Gore and he wanted to escape George W. Bush after the election by going to the desert.’

‘That’s something you’ve really got to do at least once, get out to the Mundi Mundi Lookout and gaze at the vastness of the desert.’

Strahan, in Tasmania, is very different but ‘an absolutely amazing place’, he said.

‘Seeing the convict ruins there and the Gordon River you can really imagine what life was like for convicts.’

Mr Elder visited 1,322 Australian towns over eight years for an epic national travel guide  covering the A-Z of Australia – from Aberdeen, in New South Wales to Zeehan, in Tasmania.

A living monument, this ‘masterpiece’ of a town is a nearly perfectly preserved gold mining town from the 1850s and a place to ‘mooch and savour’.

You don’t have to live somewhere to appreciate it. Situated on the west coast it is cold wet, one of the loneliest and most isolated places on the planet. ‘It’s unforgettable as an amazing reminder of what convicts had to put up with,’ Mr Elder said.

Our closest thing to Jurassic Park, this is the launch point for an amazing 332km dinosaur trail. Mr Elder says it’s: ‘a superb exploration of the world of dinosaurs which existed in the area between 100 and 90 million years ago. Each dinosaur experience is totally different.’ 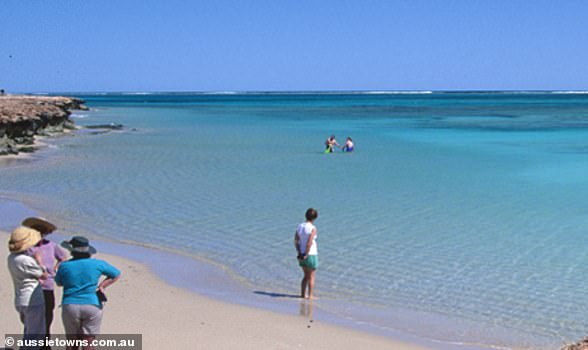 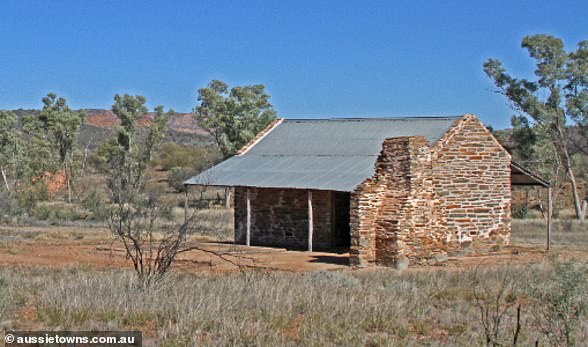 It’s no secret to the people of Western Australia, but remains under-rated by the rest of Australia and international tourists. ‘The countryside around it is just gorgeous and the Ningaloo Reef is better than the Great Barrier Reef,’ Mr Elder says.

One of those special places frozen in time, it’s the harshest gold mining town in Australia, set right in the middle of the desert. ‘It reveals to you the visitor the kind of life people led in the quest for gold.’

Mr Elder says it’s an absolutely gorgeous coastal town, combining a dramatic rocky, windswept coastline with attractive and secluded beaches including the beautiful, 17 km long Long Beach. ‘Nobody knows anything about it either.’ 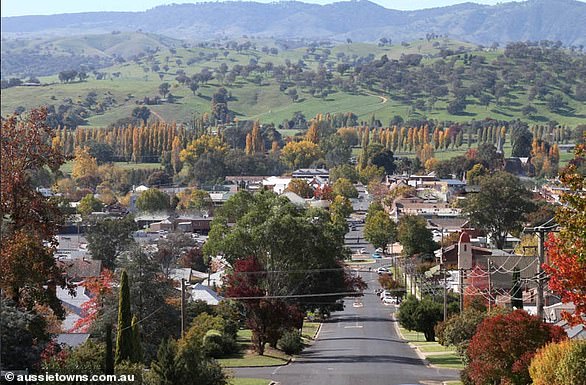 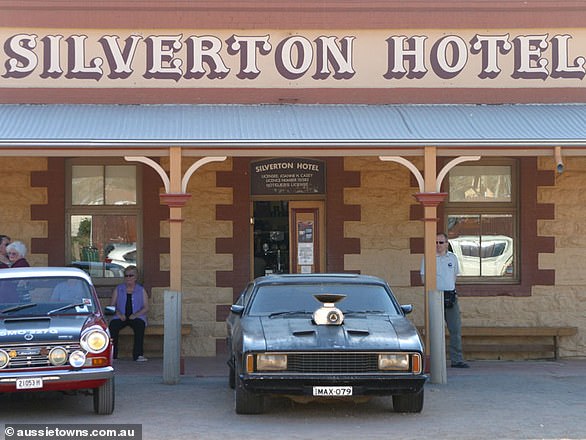 Mr Elder admits he’s biased as this is his home town, but ‘in Autumn it is unbelievable, the colours are incredible, it’s an exceptionally pretty country town. Nestled in a valley on the edge of the Snowy Mountains it is surrounded by rolling foothills.

It should be a ghost town, but instead it’s a ‘very very special place on the edge of the desert’ and the home of Mad Max. Often home to a strange mix of tourists, artists and movie producers.

‘It boasts one of the finest attractions in Queensland – the Ted Elliott Mineral Collection at TerrEstrial. Even if you only have a limited interest in minerals, it is compelling.’ Cobbold Gorge nearby is also amazing.

‘Most Australians think that Uluru is the largest monolith on the continent but, in reality, Mount Augustus, a massive rock which can be seen from 70 km away, is significantly larger and more impressive.’

He avoided our biggest cities – Sydney, Melbourne, Brisbane, Adelaide and Perth – but did write about their outskirts – including Campbelltown, Kurnell, Fremantle, Yarra Valley the Dandenongs.

But Mr Elder’s purpose was to write about towns we – and the world – don’t know much about.

And he may be the first to write about basically unknown spots such as Wyalkatchem, Western Australia; Yankalilla, South Australia; Serviceton in Victoria, Ti Tree in the Northern Territory and Quilpie, Queensland.

And after stopping in a thousand local pubs he’s established what our national dish should be.

Bruce Elder spent nearly eight years – without taking a day off – criss-crossing  the country researching and photographing towns to produce a website for tourists who want to see ‘the real Australia’.

‘I doubt there is a single country pub or restaurant that doesn’t serve chicken parmy. It should really be our national dish,’ Mr Elder said. 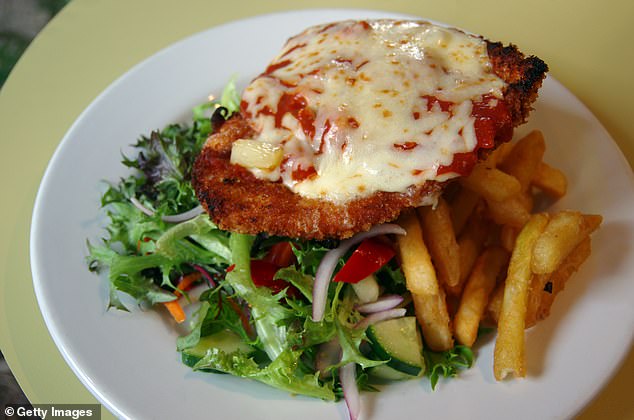 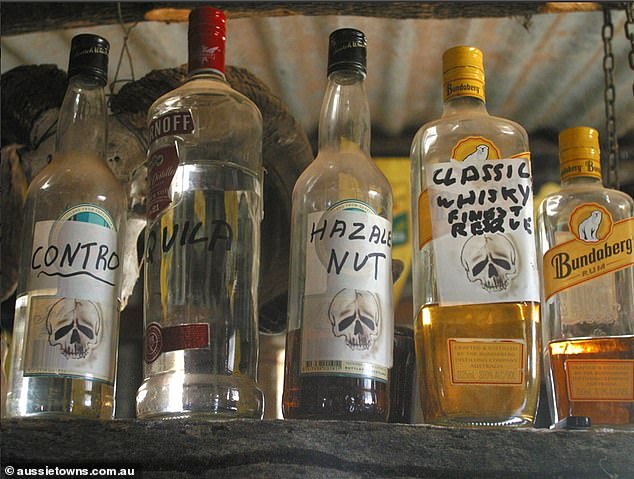 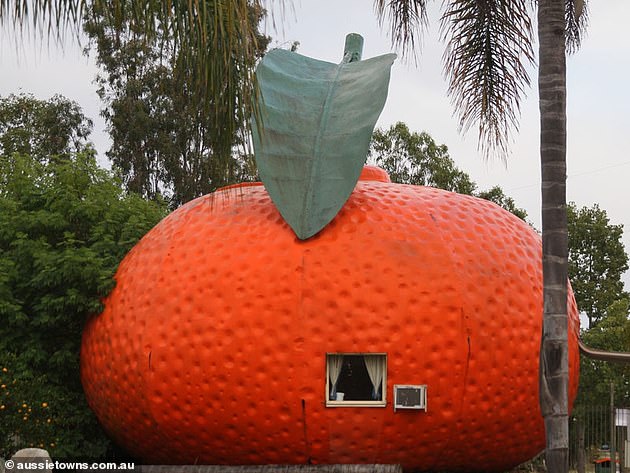 At most of those towns he still found chicken parmies and an unmistakable dry Aussie sense of humour.

At Quilpie, Mr Elder says he was the victim of a prank between friends when one dobbed in his unsuspecting mate.

It was a wind-up.

‘But I did find something truly amazing in Quilpie,’ Mr Elder said.

‘The altar in the catholic church is made entirely out of ‘thunder eggs’, which are rocks that when you crack them open they reveal beautiful opals inside.’

About the town of Woodenbong, Mr Elder wrote ‘No one is sure what Woodenbong means’, but he speculates it could mean ‘lagoon’ in the local Bundjalung language or ‘Nguthunbung’, which means ancestral being.

Mr Elder is an Australia Day ambassador which comes with an invitation from the Australia Day Council to visit a different town each year. This year it was Balranald, NSW, just over the Great Dividing Range near Mildura. 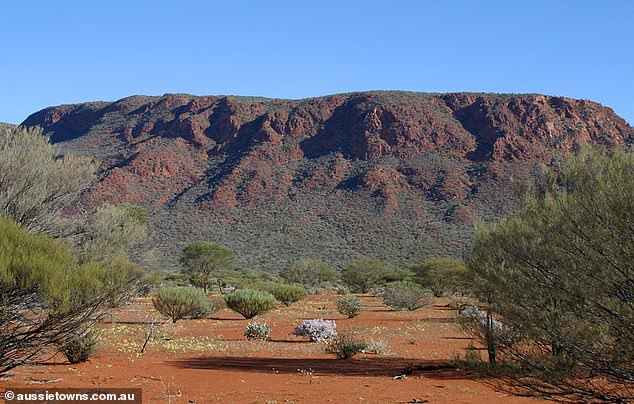 Mount Augustus, WA, is massive rock which can be seen from 70 km away, is significantly larger and more impressive than Uluru 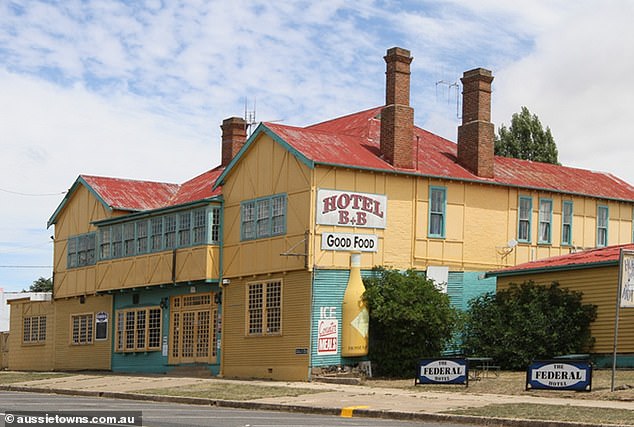 The half-timbered faux Tudor Moran’s Federal Hotel, at Nimmitabel, was built in the 1890s

‘I had a Chinese meal in local bowlo and I saw lots of good people win awards on Australia day – those are the things that make Australia special,’ he said.

Mr Elder even wrote a listing for Wilcannia, a town notorious as one of the most dangerous in NSW.

‘There has long been a perception, fuelled by newspaper reports and images of groups of Aborigines standing around outside the pubs in the main street, that the town is a hotbed of violence, dysfunctional behaviour and ‘problems’, he wrote.

‘It is very common to hear locals advising visitors not to stop in Wilcannia because it is a dangerous town.’

‘This assessment is simply not true,’ he wrote. ‘Sadly very few travellers get out of their cars, have a look around this genuinely fascinating historic port town and talk to the Aboriginal locals, who are, almost without exception, very friendly and only too happy to chat.’

In all Mr Elder went to every state and territory, took 60,000 photos and wrote more than two million words – enough for 33 novels. 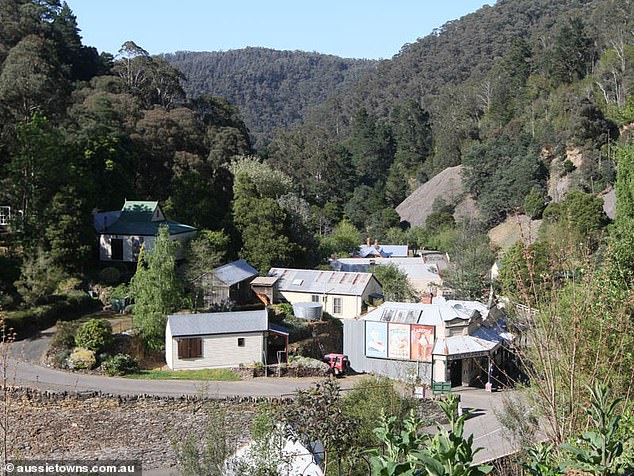 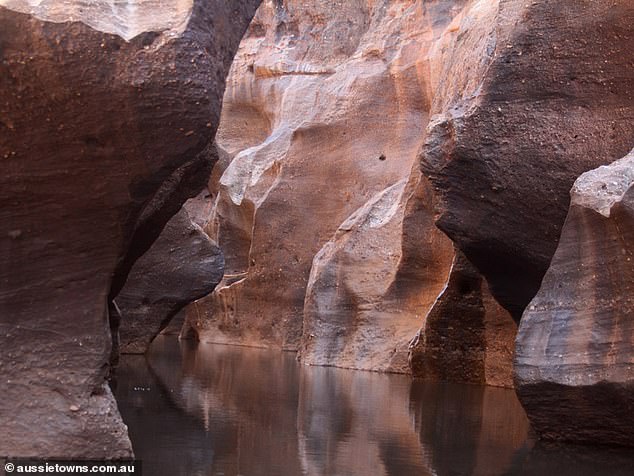 Although he visited over a thousands towns – took 60,000 photos and wrote over two million words – a few still stood out.

On Mount Augustus, Western Australia, he says: ‘Most Australians think that Uluru is the largest monolith on the continent but, in reality, Mount Augustus, a massive rock which can be seen from 70 km away, is significantly larger and more impressive.’

‘The most obvious was Hahndorf in South Australia, where everyone eats scnhitzel and sausages and every building looks like you stepped straight out of Germany.

‘Of course before Covid it was full of German tourists.’

Did he notice anything that unites Australians apart from chicken parmies?

‘For the most part, Australians are happy enough to wear a mask to help fight Covid. No matter where I went people seemed to have the attitude, ‘OK, if I have to wear a mask, I’ll wear a mask. No worries, I’ll do it.’ 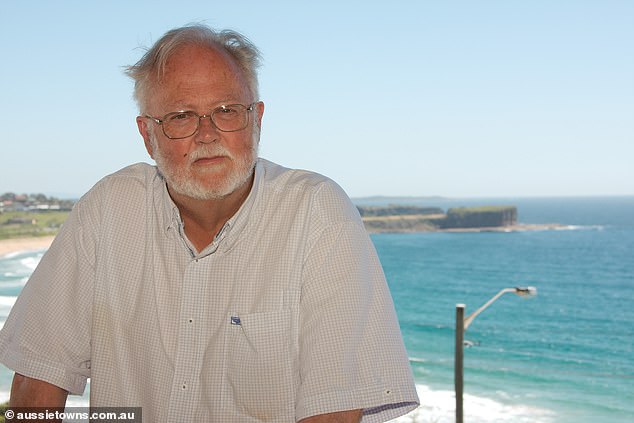 Retired travel writer Bruce Elder worked for nearly eight years without a day off to visit 1322 Australian towns to research his website aussietowns.com.au