Socceroos star Awer Mabil dedicated his go-ahead penalty in Tuesday morning’s World Cup qualifier to his new country – reflecting on his family’s incredible journey after immigrating to Australia from a Kenyan refugee camp.

The 26-year-old and his family fled civil war in their native Sudan, with Mabil spending the first decade of his life in the Kakuma refugee camp in Kenya’s northwest. The camp is home to more than 200,000 people.

Mabil, who now plays for Cadiz in Spain’s LaLiga, paused for a few moments before taking his deciding penalty against Peru, revealing after the match that he had been reliving his family’s odyssey to their new homeland.

‘I knew I was going to score. It was the only way to say thank you to Australia on behalf of family,’ he told reporters. 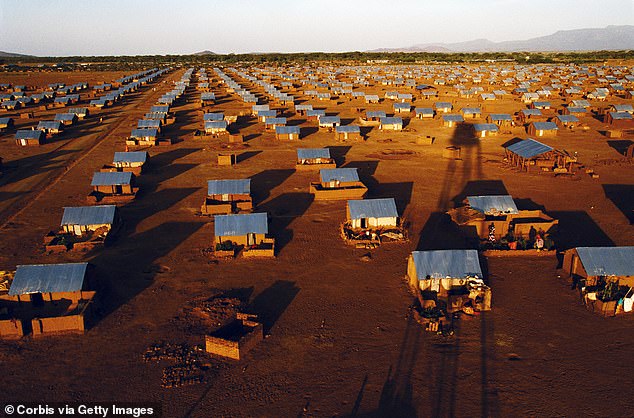 The 26-year-old and his family fled civil war in their native Sudan, with Mabil spending the first decade of his life in the Kakuma refugee camp in Kenya’s northwest (pictured)

Mabil admitted football acted as his solace away from the reality of the Kakuma refugee camp, spending hours a day honing his craft to find himself on the verge of a World Cup debut.

‘My hotel room here is definitely bigger than the hut, the room we had as a family in that refugee camp.’

His family’s refugee status was granted in 2006, before the Mabils moved to Adelaide, where he made a quick impression on local scouts.

He came through the South Australian National Training Centre, eventually playing for semi-professional side Campbelltown City and finally with Adelaide United in the A-League. Mabil’s story isn’t without heartbreak, however, after his 19-year-old sister, Bor, tragically died in a fatal car crash during a high-speed race on Australia Day in 2019.

She suffered critical head injuries from the accident while a passenger in a car with her boyfriend Akol Akol.

Akol, who was 19 at the time, said he took full responsibility for the crash and couldn’t apologise enough for the ‘devastating’ outcome and the effect on those dear to Ms Mabil.

‘Nothing I say today can ever make up for my actions or the grief that her family are forced to endure for the rest of their lives,’ he said. ‘I do not deserve forgiveness.’

The prosecutor revealed he had been fined and had his licence disqualified just months before over another crash caused when he was also drunk and driving on the wrong side of the road.

Ms O’Donnell said Akol had a blood-alcohol level of 0.22 and a small amount of MDMA in his system at the time of the January crash which came as he was racing to get to a party.

When he lost control, the car he was driving flipped onto its side and slid for another 50 metres, hitting a fence, a tree and a light post.

Ms Mabil died at the scene, while Akol was sentenced to three years and one month behind bars. 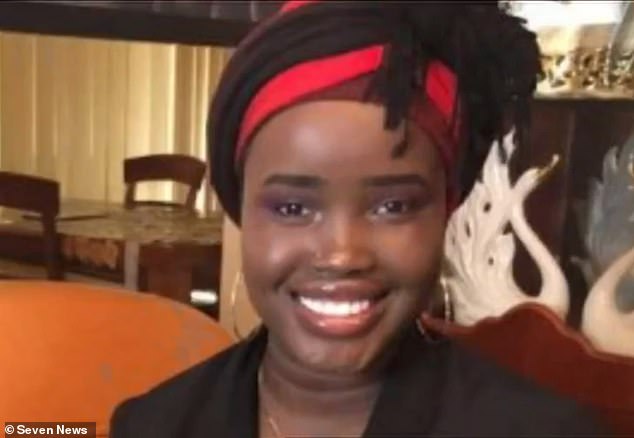 Her brother said on Tuesday the family were grateful for the opportunity at a new life, holding back tears as he reflected on his journey.

‘For Australia to take us in and resettle us, it gave me and my siblings and my whole family a chance at life. That’s what I mean by thanking Australia for that chance of life, that chance of opportunity they allowed my family,’ Mabil said.

He wants to inspire other refugees to follow their dreams and hopes his story can be the first in a long line of asylum seekers who can represent their new country.

‘I think now I might have a little impact on Australian football,’ he said.

‘I scored, a lot of my teammates scored, everybody, played a part and maybe that refugee kid played a big part.’