Beauty vlogger Chloe Morello has revealed the hairbrush she swears by for sleek, silky locks – and it will only set you back $39.95.

The Australian YouTuber, 30, calls the ‘Scream-Free Detangling Brush’ from Adelaide brand Ugly Swan the ‘best’ she has ever used.

In a recent TikTok video, the mum-of-one – who in June welcomed son Santino with her dancer husband, Sebastian Mecha – says it ‘doesn’t tug or pull your hair’ even when it’s wet or knotted after a shower. 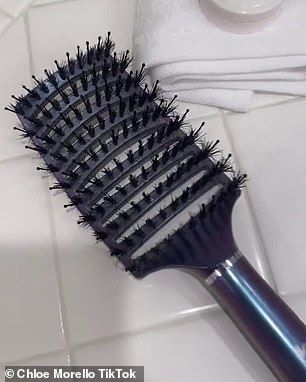 Beauty vlogger Chloe Morello (left) has revealed the hairbrush (right) she swears by for sleek, silky locks – and it will only set you back $39.95

Developed by mums Marissa, Annette and Marisa who all have daughters with sensory issues, the revolutionary brush promises to gently detangle hair even on the most sensitive scalps.

The brush is made with natural boar bristles that tease your natural scalp oils out to condition your hair, while soft, large-dipped nylon pins detangle tresses without scratching or pulling on the scalp.

Chloe’s endorsement, which has racked up 118,900 views since it was uploaded online on Monday, sparked a wave of excitement with many saying they had ordered the brush immediately after watching. 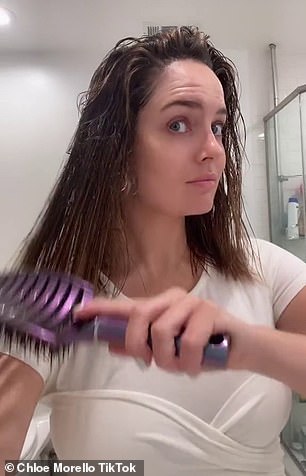 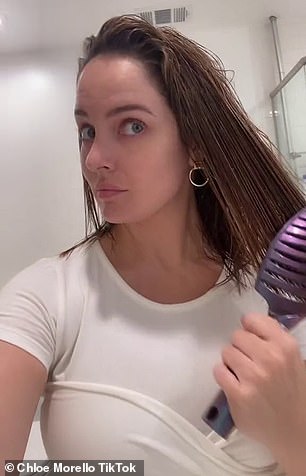 Developed by three Adelaide mums who have daughters with sensory issues, the revolutionary brush (pictured) promises to gently detangle hair even on the most sensitive scalps

‘Definitely need to try this,’ one woman wrote.

‘I bought a similar brush off Facebook and it’s amazing,’ said a second, while a third added: ‘I have this and use it on my little girls, I love it!’

Chloe is regarded as one of Australia’s leading authorities on beauty and self-care.

Earlier this week, the founder of Face Halo shared a glimpse inside her envy-inducing skincare cabinet after reorganising her vast collection which includes a staggering 91 products from luxury brands such as La Mer and Eve Lom. 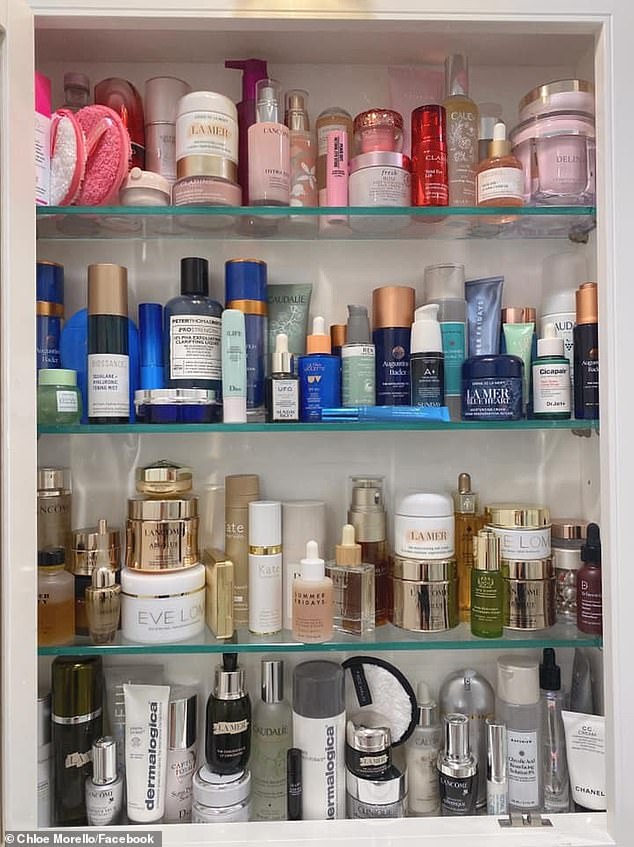 Chloe colour coordinated each of the four shelves, putting pink products on top followed by blue, gold and silver.

She acknowledged the extravagance of her elaborate cupboard, writing: ‘This is absolutely not practical. But it’s pretty and very satisfying.’

Among the most expensive items are a $455 Lancome face cream infused with gold and a $169 Eve Lom cleanser, as well as a $265 moisturiser and a $300 serum from La Mer. 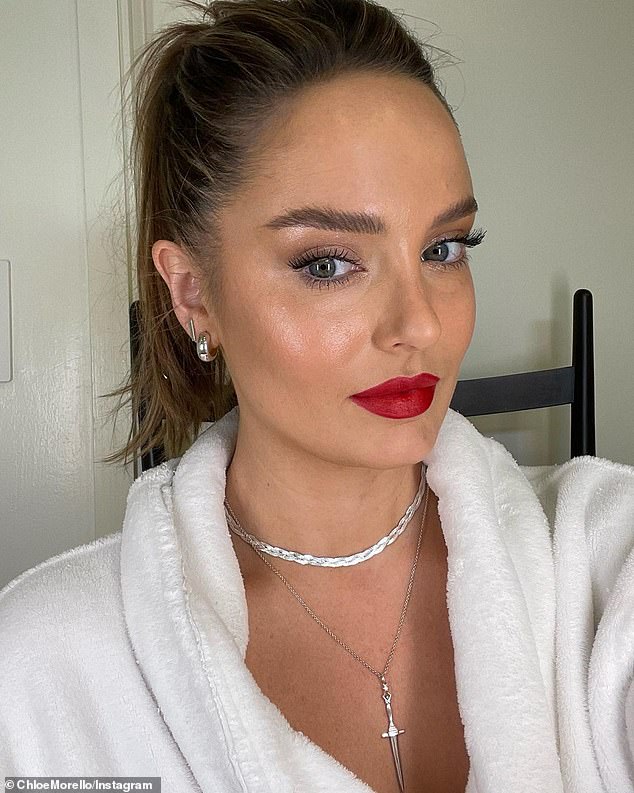 The Australian YouTuber (pictured) to Instagram to showcase her elaborate collection

Her aesthetic organisation, which has racked up 11,850 ‘likes’ since it was uploaded online on Sunday, sparked a wave of envious praise.

‘Wish my cabinet looked like that,’ one woman replied, while a second said: ‘Too satisfying, wish I had your collection!’

A third added: ‘Ok this is happening to my bathroom cabinet.’

Earlier this year Chloe celebrated the biggest milestone of her life so far when she welcomed her first child, son Santino, with husband Sebastian ‘Seba’ Mecha. 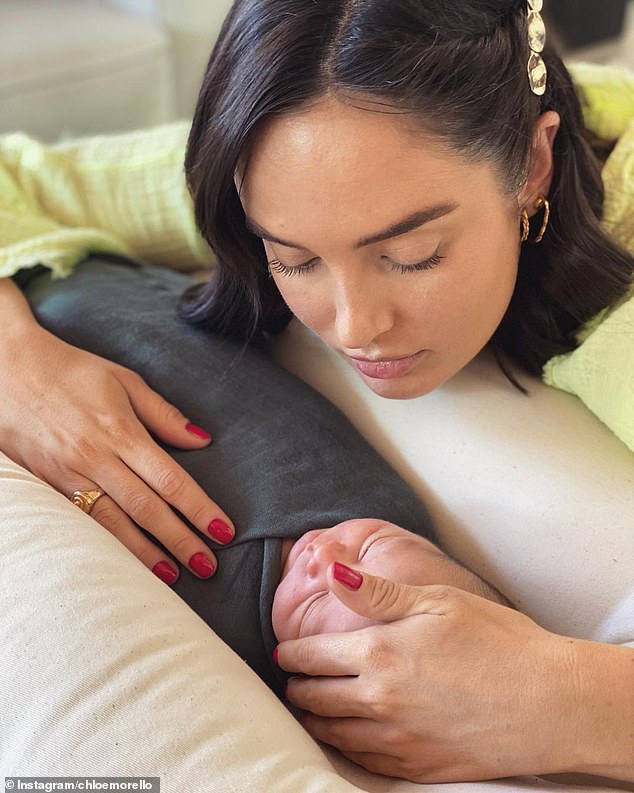 Earlier this year Chloe celebrated the biggest milestone of her life so far when she welcomed her first child, a son named Santino (pictured), with husband Sebastian ‘Seba’ Mecha

The influencer revealed her bub’s name was inspired by her love of the Francis Ford Coppola-directed film, The Godfather.

Chloe said Santino will go by the name Sonny for short.

In the hit 1972 blockbuster, there is a fictional character named Santino ‘Sonny’ Corleone, who is the son of mobster Don Vito Corleone. 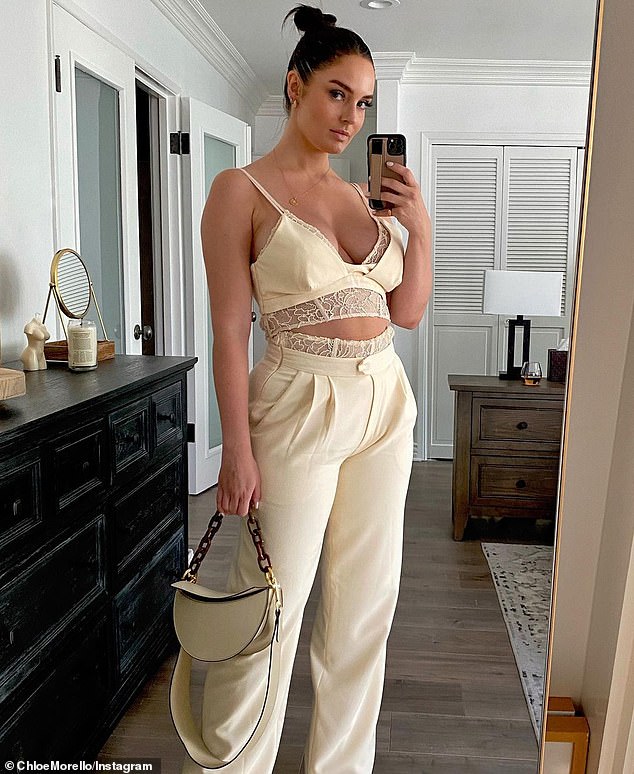 The influencer (pictured) revealed her bub’s name was inspired by her love of the Francis Ford Coppola-directed film, The Godfather

Chloe said she won’t be sharing too much about her son online for the sake of his privacy, but explained: ‘I didn’t necessarily see the need in sharing his name but I don’t want to worry and always have to be always cautious about slipping up… So I am excited to tell you our beautiful son’s name is Santino!’

‘I’ve always wanted a son with this name, and YES it’s from the Godfather lol,’ she said.

‘I have loved it since I was a teenager after reading the books and seeing the movie often with my Dad. Luckily Seba loves it too, and the nickname ‘Sonny” is adorable.’